Twinkle The Annual! Can You Remember The Characters It Featured? 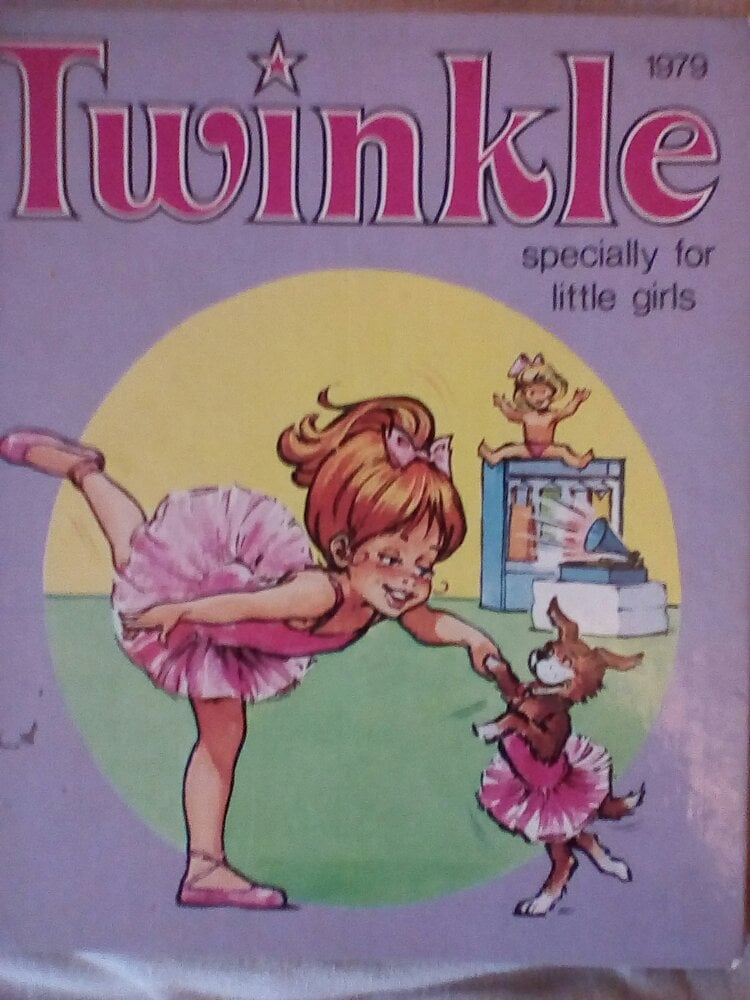 Twinkle Annuals! Twinkle was especially for little girls! Twinkle started as a Comics Magazine, in 1968 until 1999, with an Annual every year, from 1970 and its last was in the year 2003!

The Annual contained stories of regular characters, some new ones, all illustrated with beautiful pictures. Fun, colourful, perfect for a liitle girls imagination. There was also some puzzles pages and pictures to colour in, very exciting for a child!

The Annuals were printed and published by D.C. Thomson &Co, and this Annual, from 1979, cost the bargain price of 95p!

In 2012 Royal Mail issued a special stamp of Twinkle, to celebrate Twinkles history!

Lets see if you will remember all our favourite characters from the beloved Annuals, Twinkle! 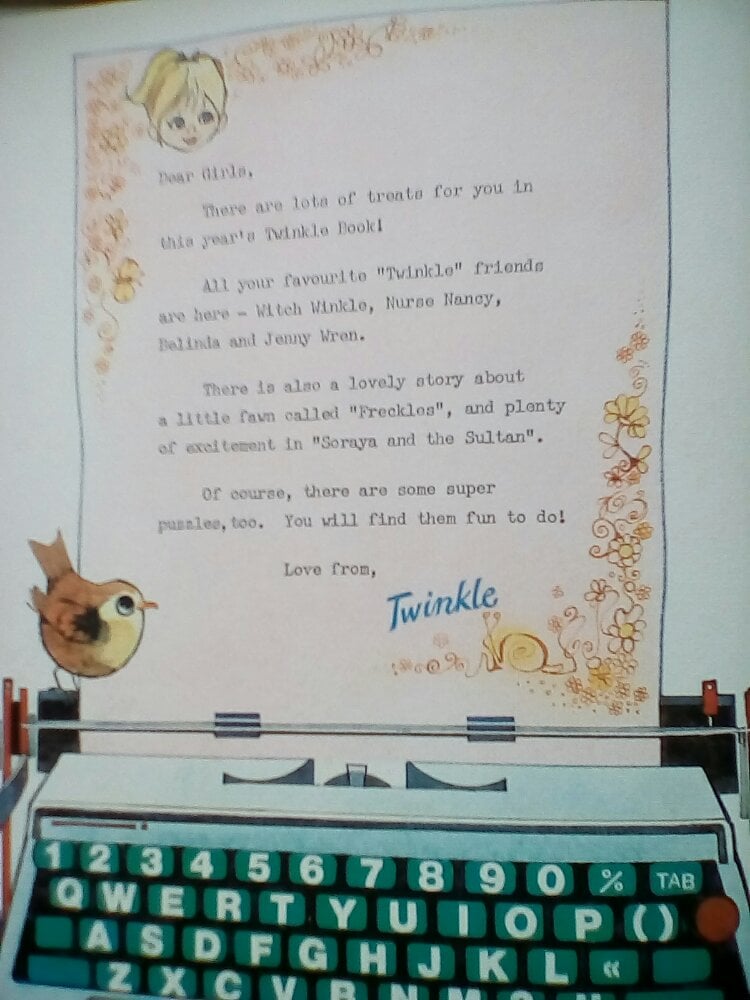 The Annuals started with a letter from the girl Twinkle herself! Here typed on a typewriter! No laptops!! The characters in the Annuals were referred to as friends, all your favourite ‘Twinkle’ friends! Twinkle says there are lots of treats in store in this Annual! 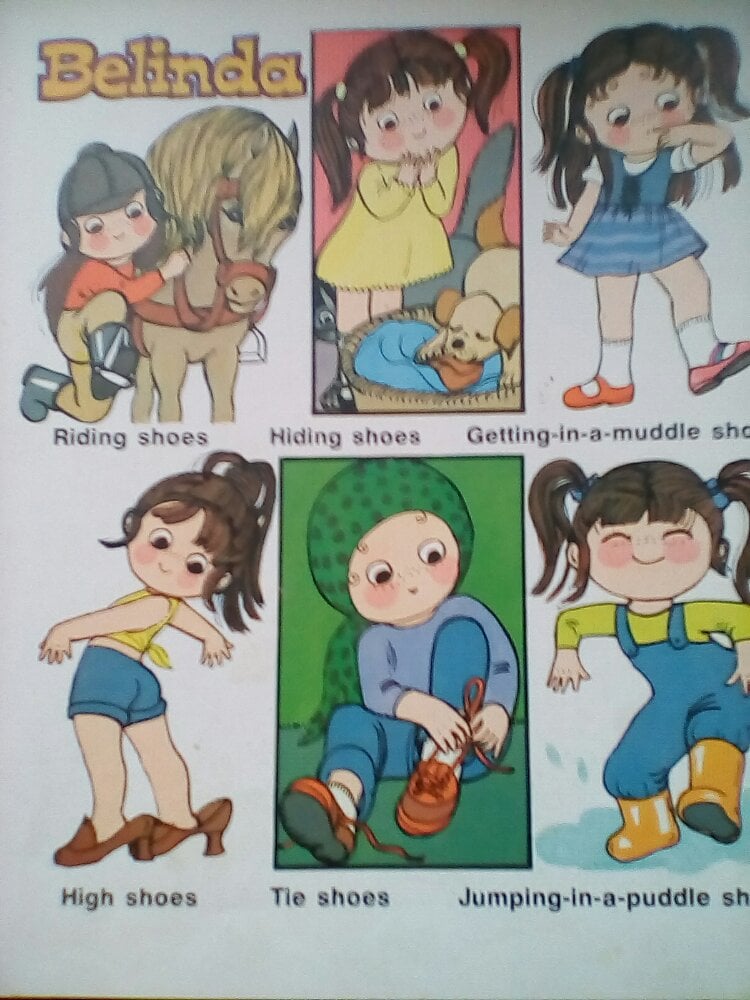 Belinda! Some of the stories had more writing, others like Belinda had few words, and spoke in pictures! But for little girls looking at bright coloured pictures was fun, especially for the pre school age, who were yet to learn to read. They could read the story through pictures! 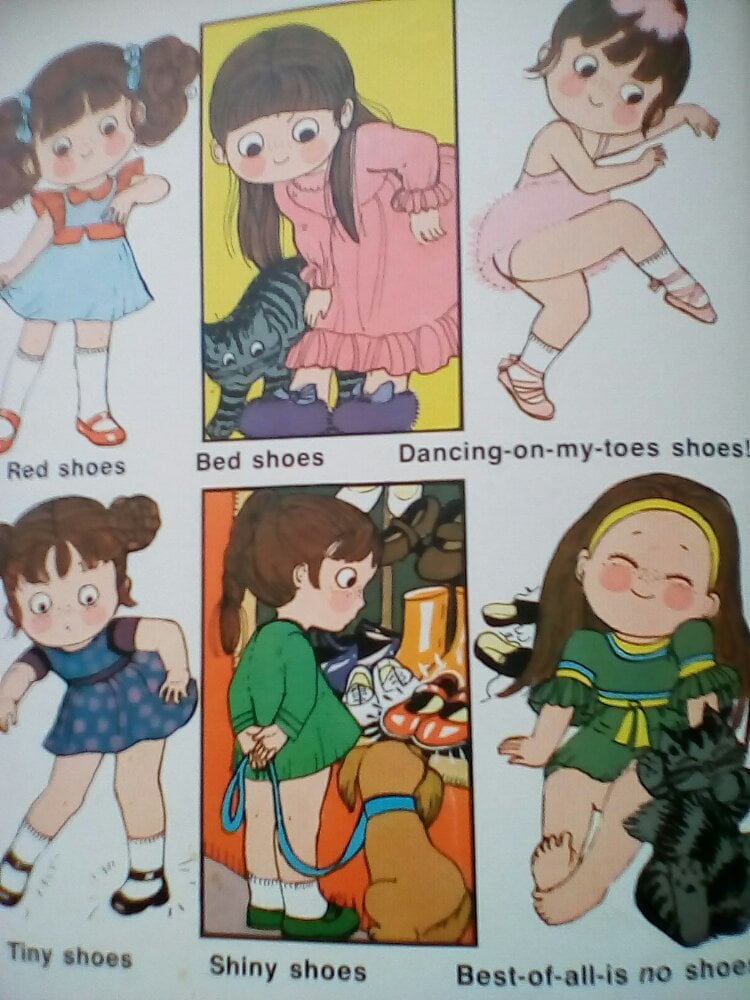 Here Belinda is telling us about her shoes! 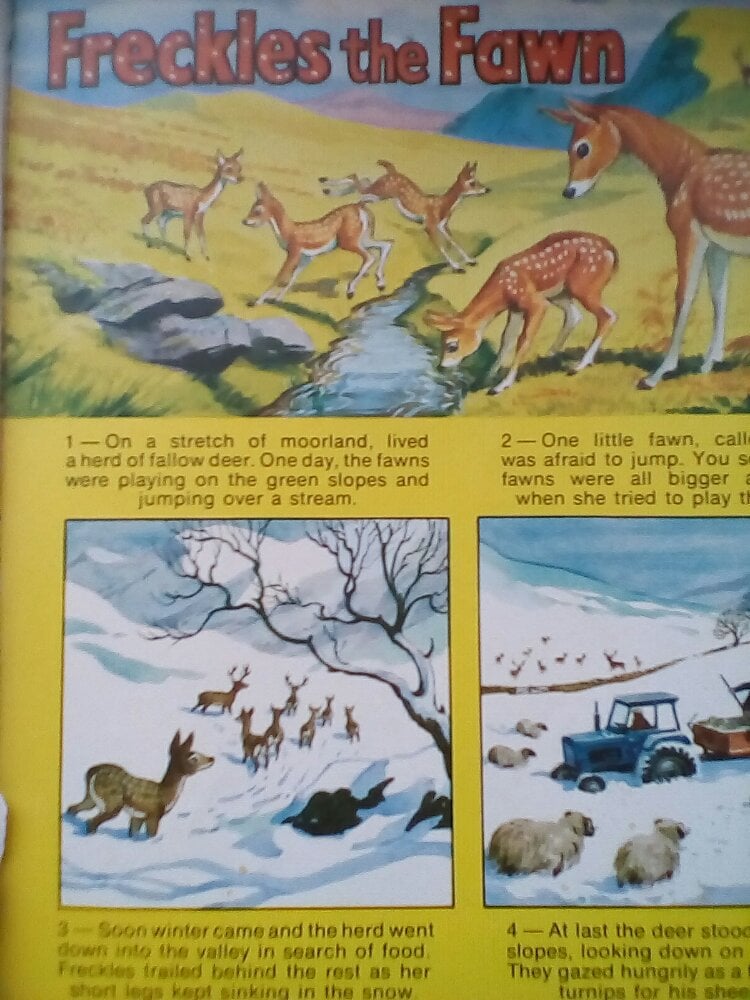 Freckles the fawn! Was the smallest in a herd of fallow deer’s, who lived on a stretch of moorland. Who gets laughed at by the herd, as being so small poor Freckles, can’t jump so high, or run as fast!

The herd that winter went down to the valley, in the snow to search for food. A boy was heading there direction on his sledge, the farmers son. The herd ran off, except little Freckles, being so small and slow, she hides behind a bush!

The boy has an accident, he crashes his sledge, falls off, and lays in the snow not moving. Freckles knew something was wrong, so went to the farm to get the farmer, she picks up a turnip, knowing the farmer would chase her, to get it back! Freckles led the farmer to his injured son.

Freckles saved the day! The farmer was so grateful he put food out everyday after that for the herd! Freckles became a very important member of the herd, for her bravery, and nobody ever laughed at her again! 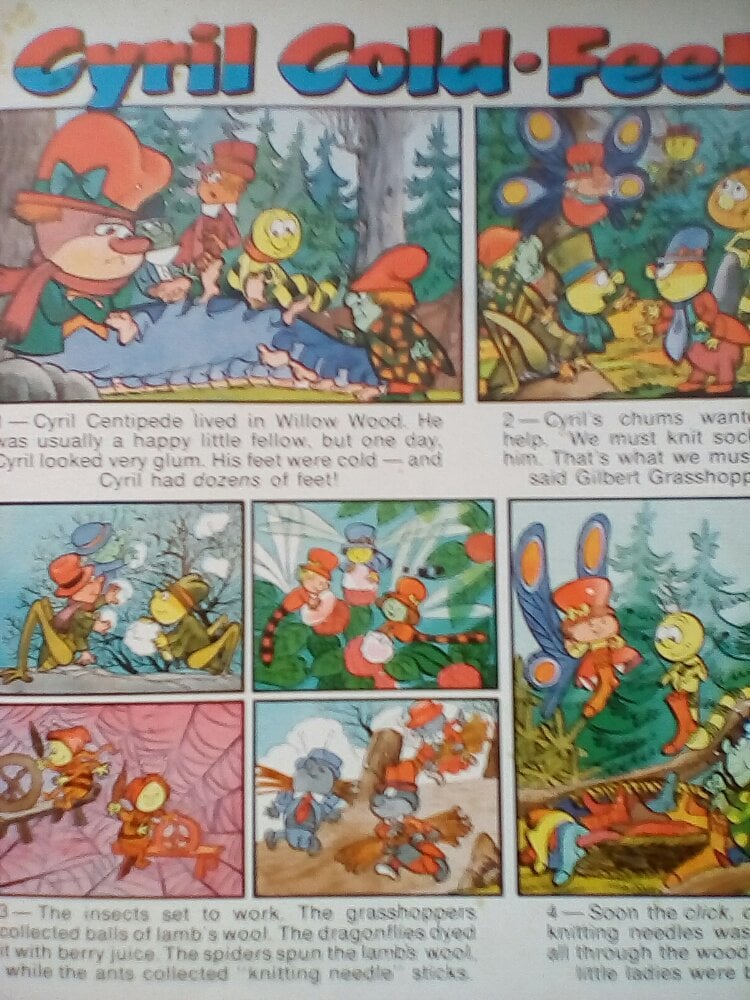 This is hilarious! Cyril Cold Feet! A centipede who lived in Willow Wood. He had one hundred feet, which were cold! So what did his friends do? They knitted him one hundred socks of course! 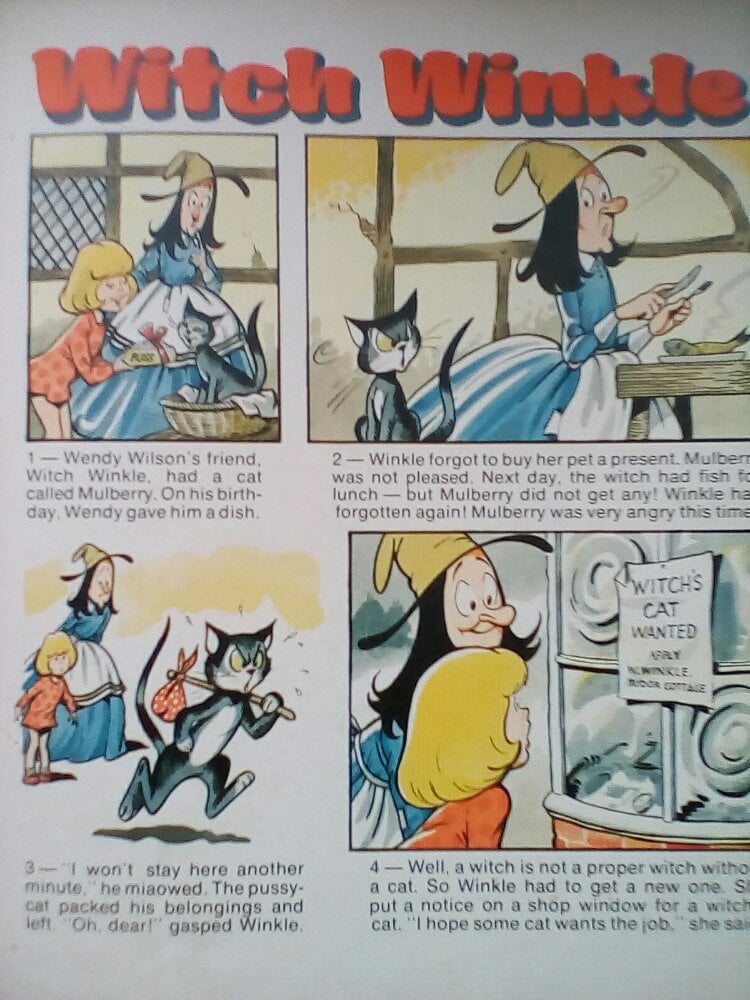 One of the most popular of Twinkle ‘friends’ was Witch Winkle! Witch Winkle had a cat called, Mulberry, and was friends with a little girl, Wendy Wilson.

Mulberry’s birthday had been forgotten, the cat was not pleased! He packed his bag and left! But Witch Winkle needed a cat, she’s a Witch! So she searches for another cat for the job! None of the cats were up to the job! So the Witch casts a spell for the right cat for her to appear. Mulberry appears! The Witch had missed him so much! Mulberry had missed her too, and his birthday was never forgot again! 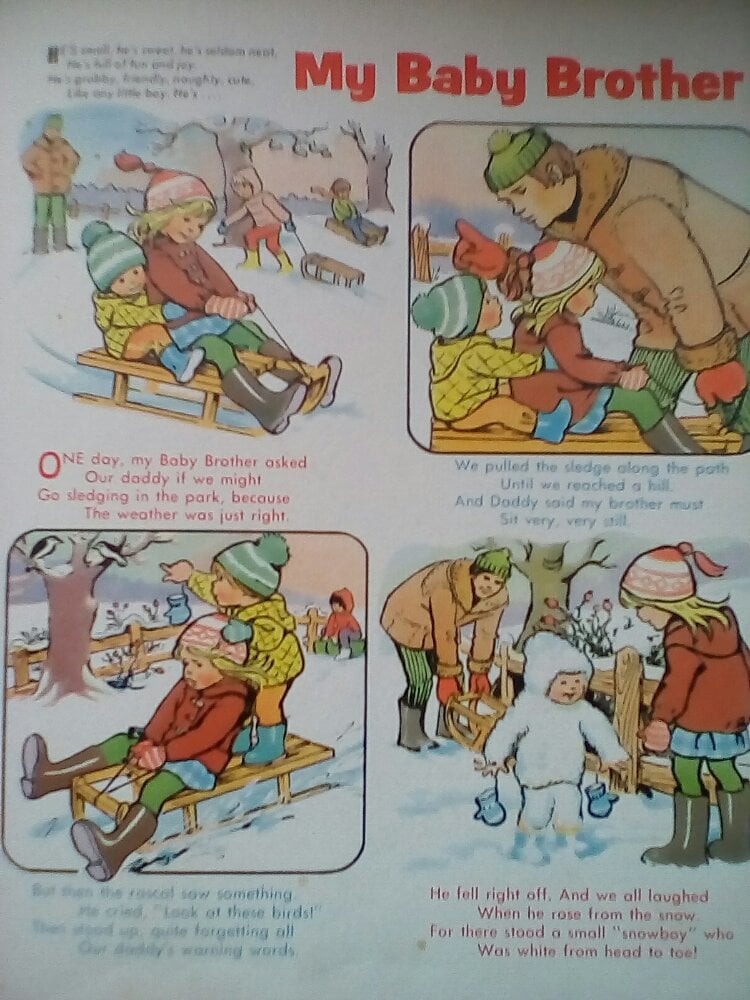 We follow a little girl and the mischief from her little brother! 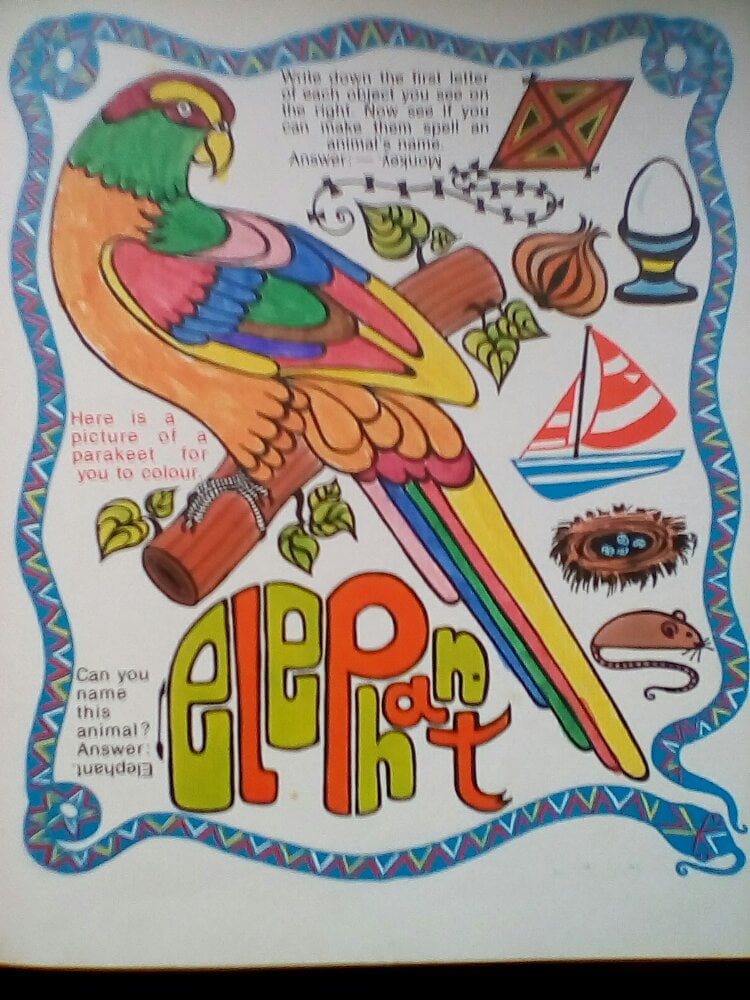 A puzzles and colouring in page! 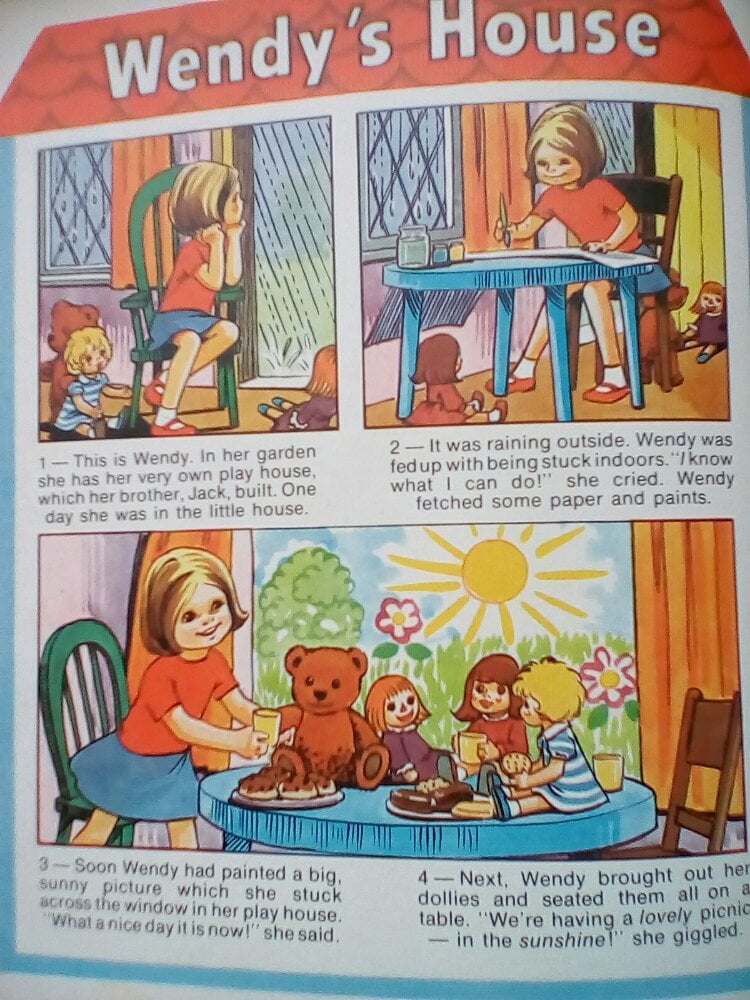 Wendy’s House! Wendy had her very own play house in her garden, built for her by her brother, Jack. Where she has lots of fun and plays all sorts of exciting games! 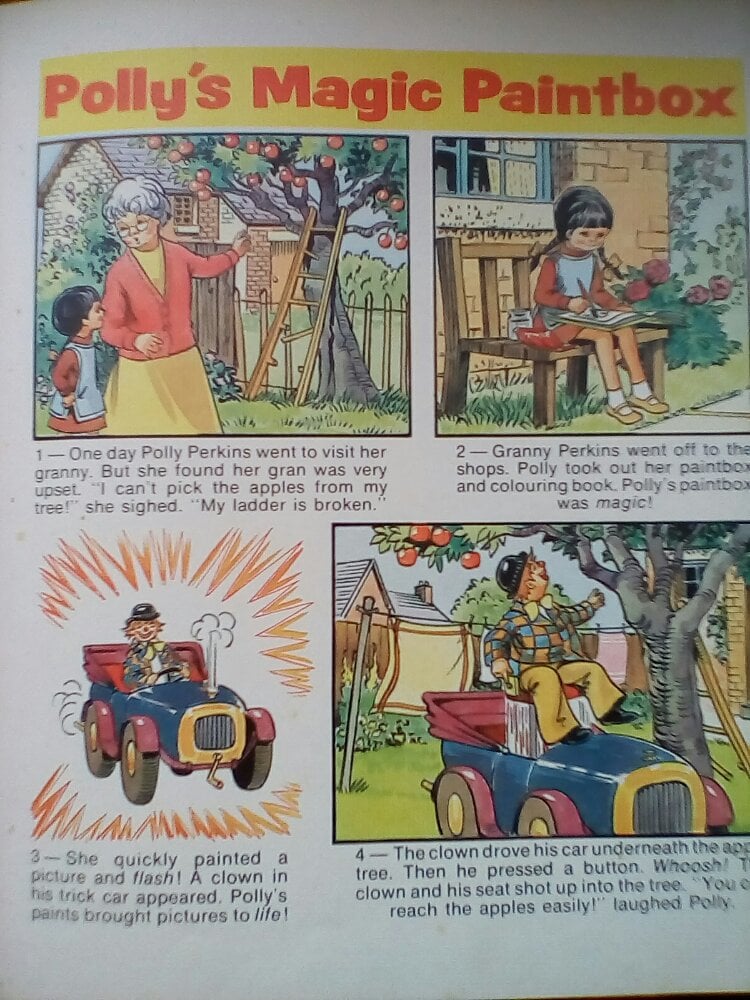 Polly’s Magic Paintbox! Polly Perkins, had a magic paint box! Where every picture Polly paints comes to life! Then when she closes her painting book, whatever has come to life disappears! Polly has some fab adventures with her paint box! 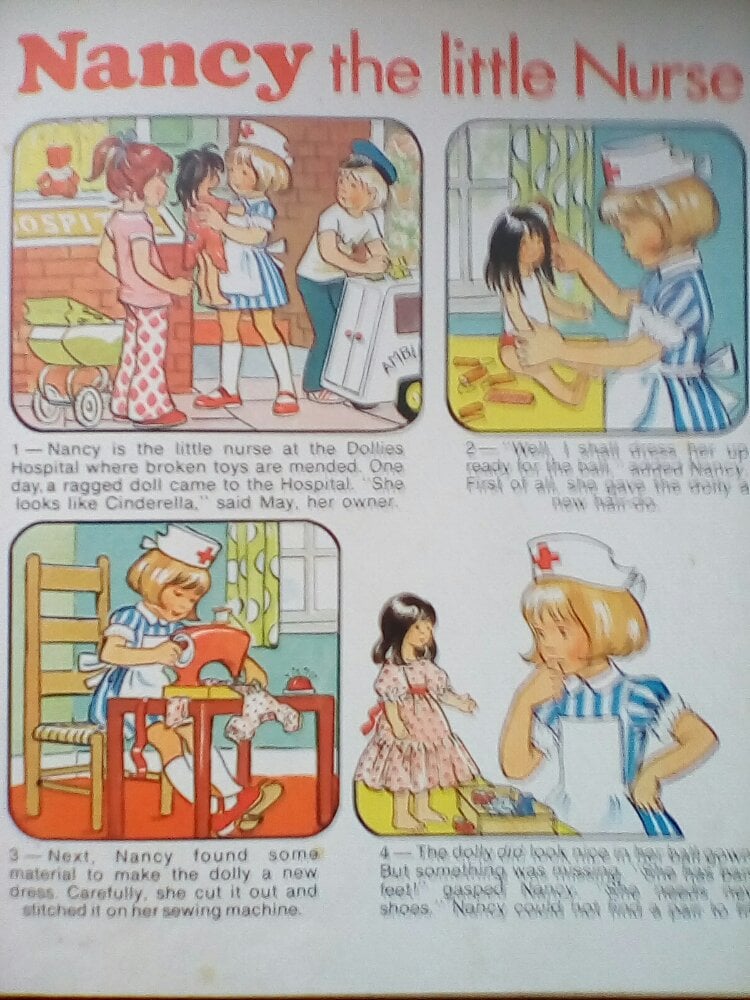 Nancy the little Nurse! Nancy was the nurse at the Dollies Hospital, where broken toys go to be mended! Her Grandad was the Dolly Doctor, who owned the Hospital. We see all the fun at the hospital, with happy endings for all the toys every time! 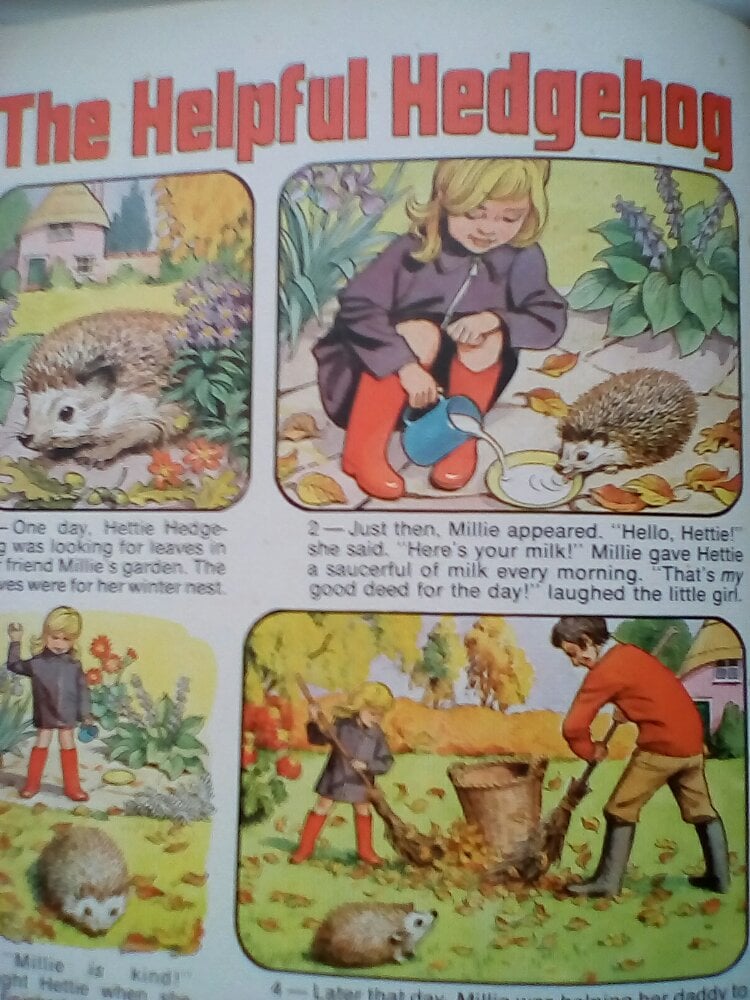 The Helpful Hedgehog! Hettie the Hedgehog, loves to do good turns and help out her friends! 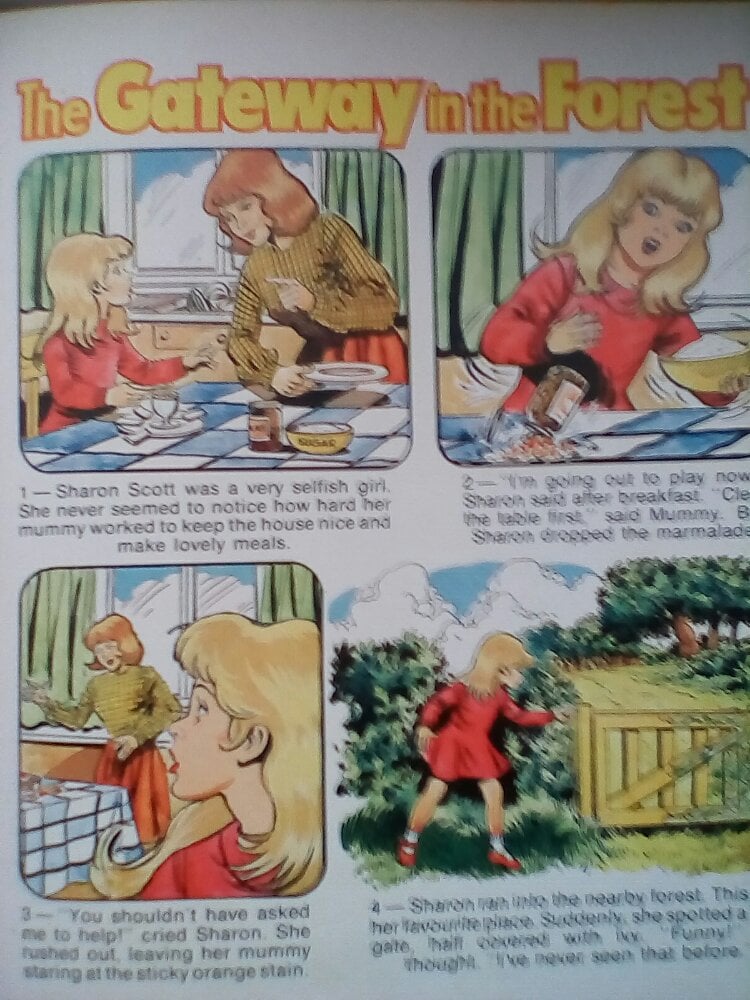 The Gateway in the Forest! Sharon Scott, a selfish little girl, who never noticed how hard her Mummy worked around the house, was often lazy and made a mess!

Sharon finds a magic gateway, which leads to a forest, she meets pixie children, who are tidying a garden and ask Sharon to help. Lazy Sharon was unsure, thinking that’s work, not play! But when Sharon saw the pretty garden flowers, she thought she’d give a helping hand!

While they all worked, they laughed, joked and sang. Sharon realised she was enjoying work! And from then on always helped her Mummy around the house! 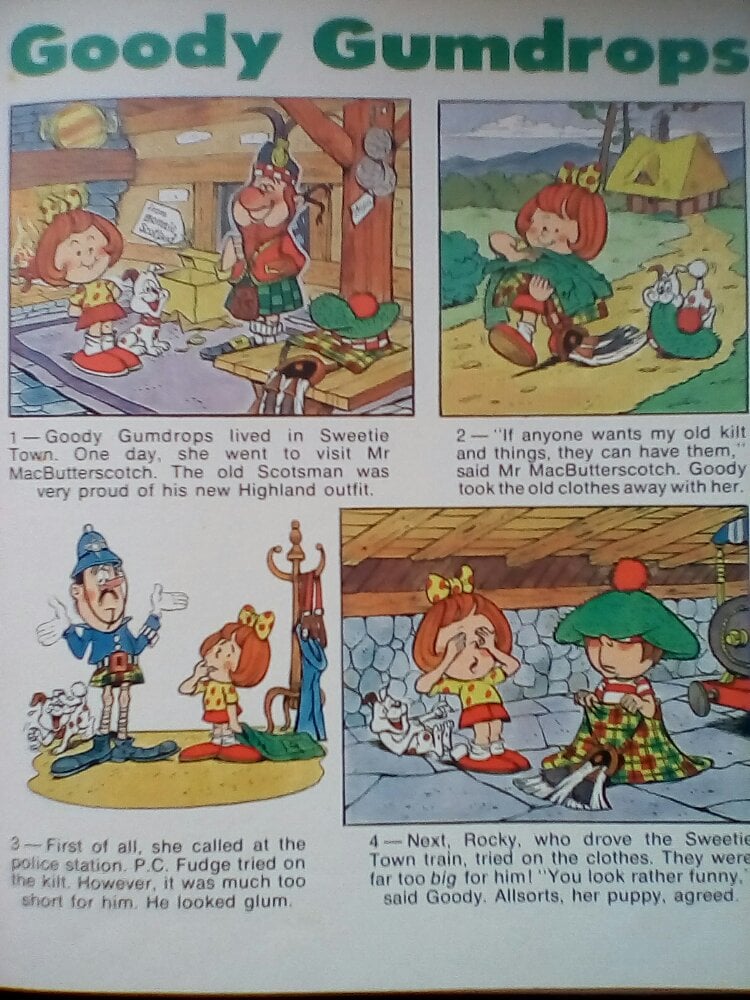 Goody Gumdrops! She lived in Sweetie Town, everyone was named after sweets! Goody Gumdrops could be found sorting one task or another around town! 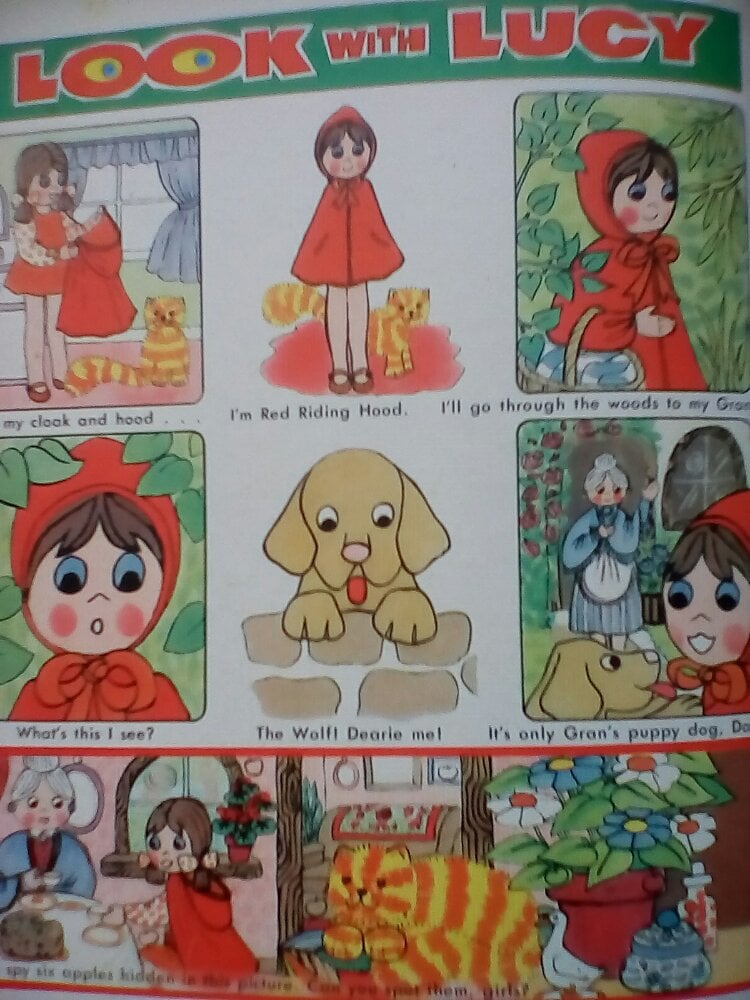 Look With Lucy. One for pre school girls, to read with pictures! 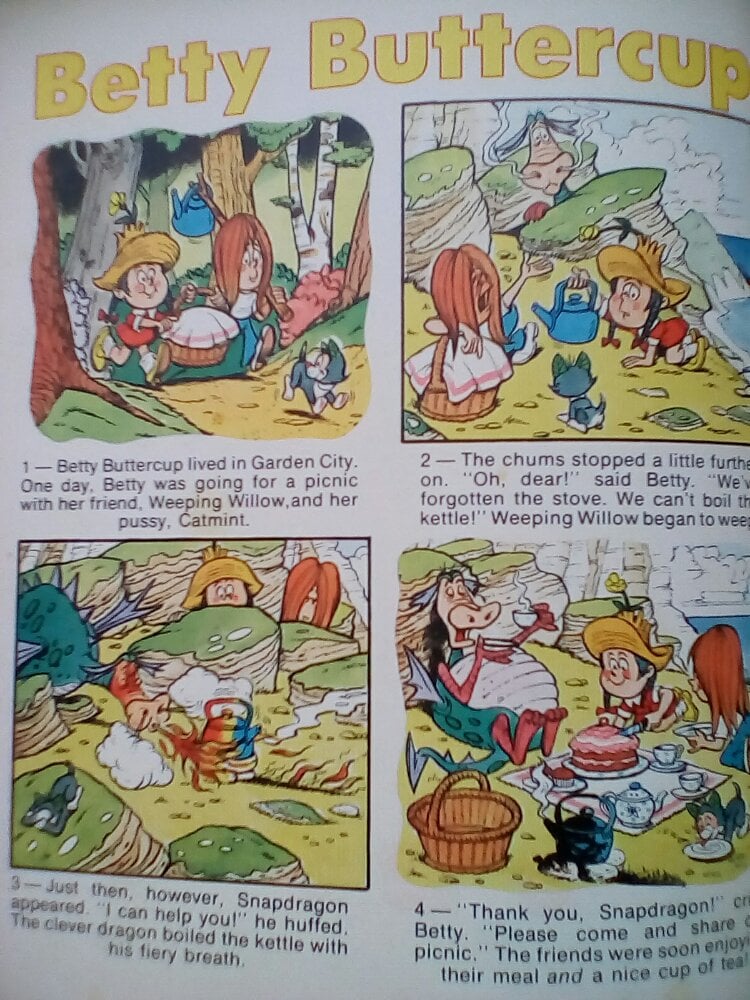 Betty Buttercup! Here Betty goes on a picnic with her friend, Weeping Willow, and her cat, Peppermint! But they forget the stove, so can’t boil the kettle! Weeping Willow begins to weep!

So what happens? A dragon appears! Obviously! The dragon boils the kettle with his fiery breath!

Then they all enjoy a cup of tea and a slice of pink iced cake! 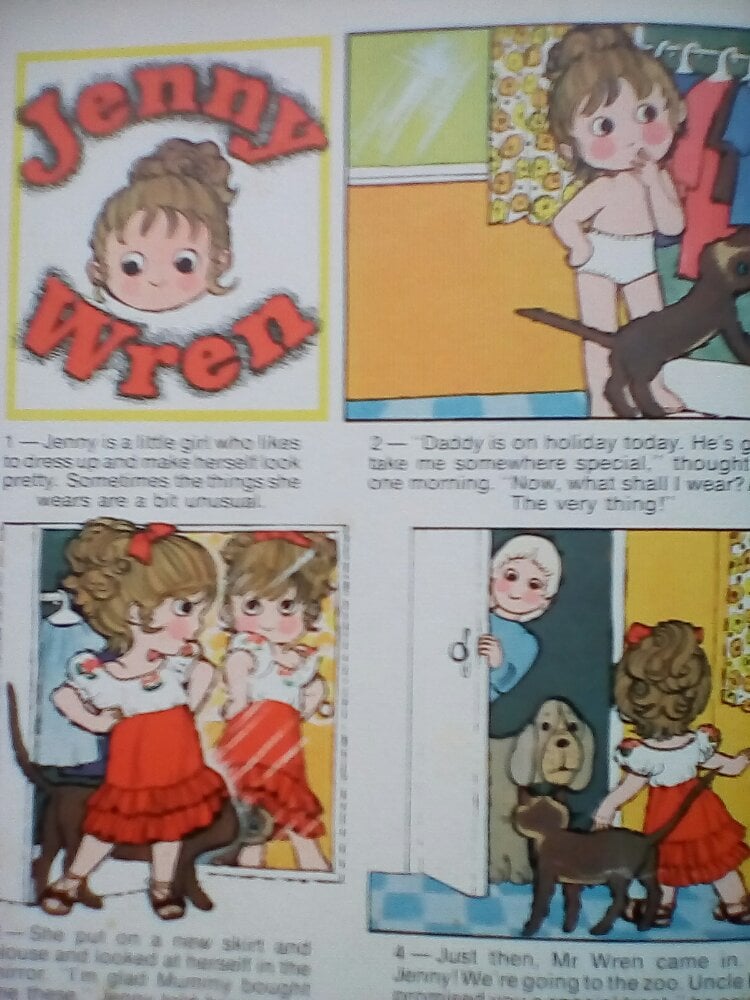 Jenny Wren! The little girl who loved dressing up and looking pretty! With a wardrobe full if pretty clothes, and a box full of dressing up clothes. Sometimes her choice of outfit was unusual, when she went to the zoo, she dressed as a monkey! The chimps invited her to join their tea party! Jenny looked the part, but her manners were much better than the chimps!

Classic ‘friends’ from the pages of Twinkle. A huge collectors item for 80s girls! It was a popular stocking filler at Christmas, which all little girls loved!