You really don’t realise how many Stephen King books and short stories have been adapted into films until you see them all listed: there are well over 50, and that’s not including the many TV adaptations. In amongst a fairly large amount of rubbish (‘Children of the Corn 666: Isaac’s Return’, anyone?), there have been some absolute classics.

Here are the ten feature film adaptations of Stephen King’s work which we can consider the best of the bunch. 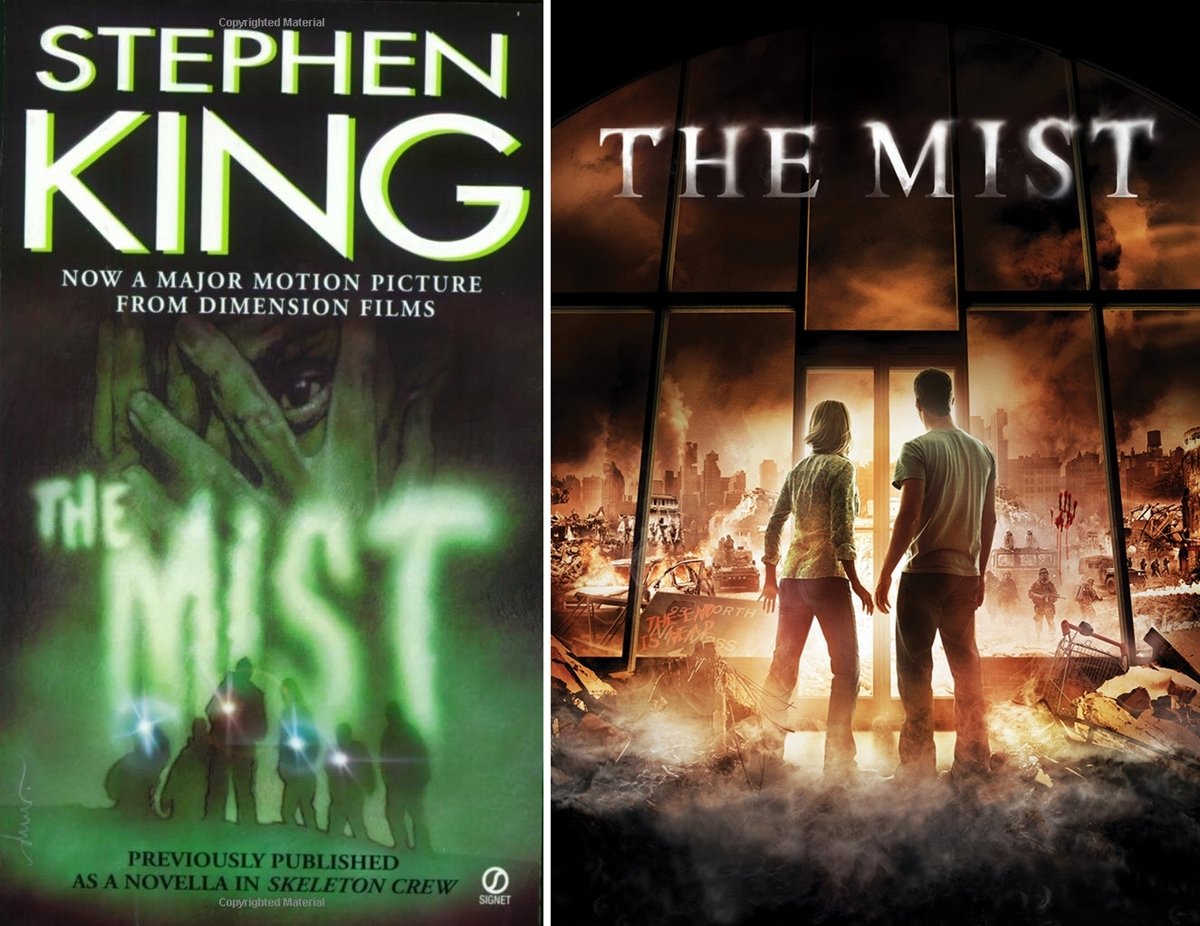 Writer-director Frank Darabont made his third and to date final Stephen King adaptation with this 2007 apocalyptic shocker. Based on King’s 1980 novella, The Mist sees a small-town community (including Tom Jane and Marcia Gay Harden) take shelter in a supermarket when the outside world is enveloped in an otherworldly mist filled with monsters.

It may have impressive CGI monsters in abundance, but The Mist is one of the many King horror stories which reminds us that the real source of terror is human nature. Emotionally intense throughout, it all builds up to one of the most notoriously depressing conclusions in film history. A short-lived TV adaptation of The Mist later hit screens in 2017. 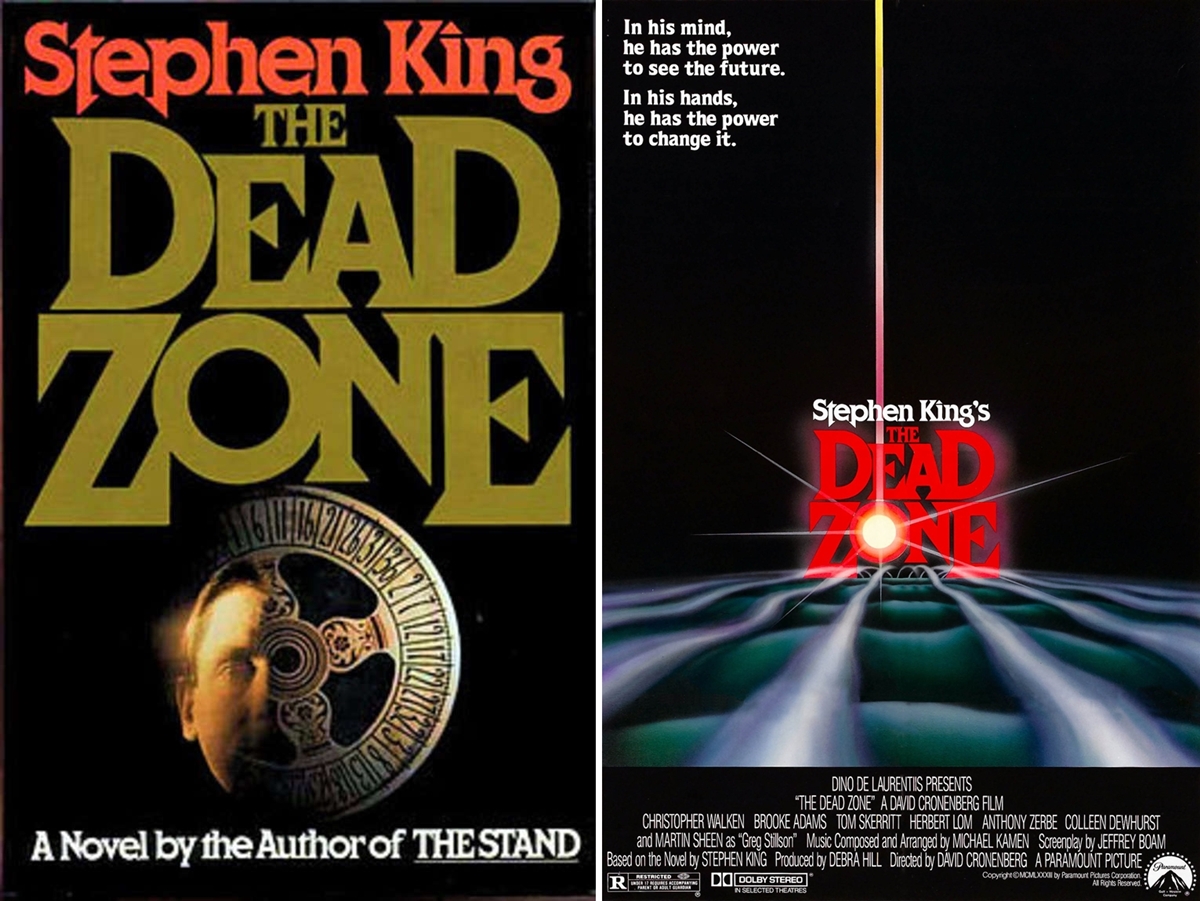 Directed by horror auteur David Cronenberg, 1983’s The Dead Zone is adapted from King’s 1979 novel about a schoolteacher named Johnny Smith, who wakes from a coma to find he has psychic powers. This rare gift sees Johnny become a consultant to the police on murder cases, but things take a dark turn when he encounters a politician with malevolent intentions.

Christopher Walken takes the lead as Johnny Smith, whilst the supporting cast includes Martin Sheen, Tom Skerritt and Herbert Lom. 19 years after the movie, Anthony Michael Hall took over the role of Johnny in a Dead Zone TV series which ran for six seasons. 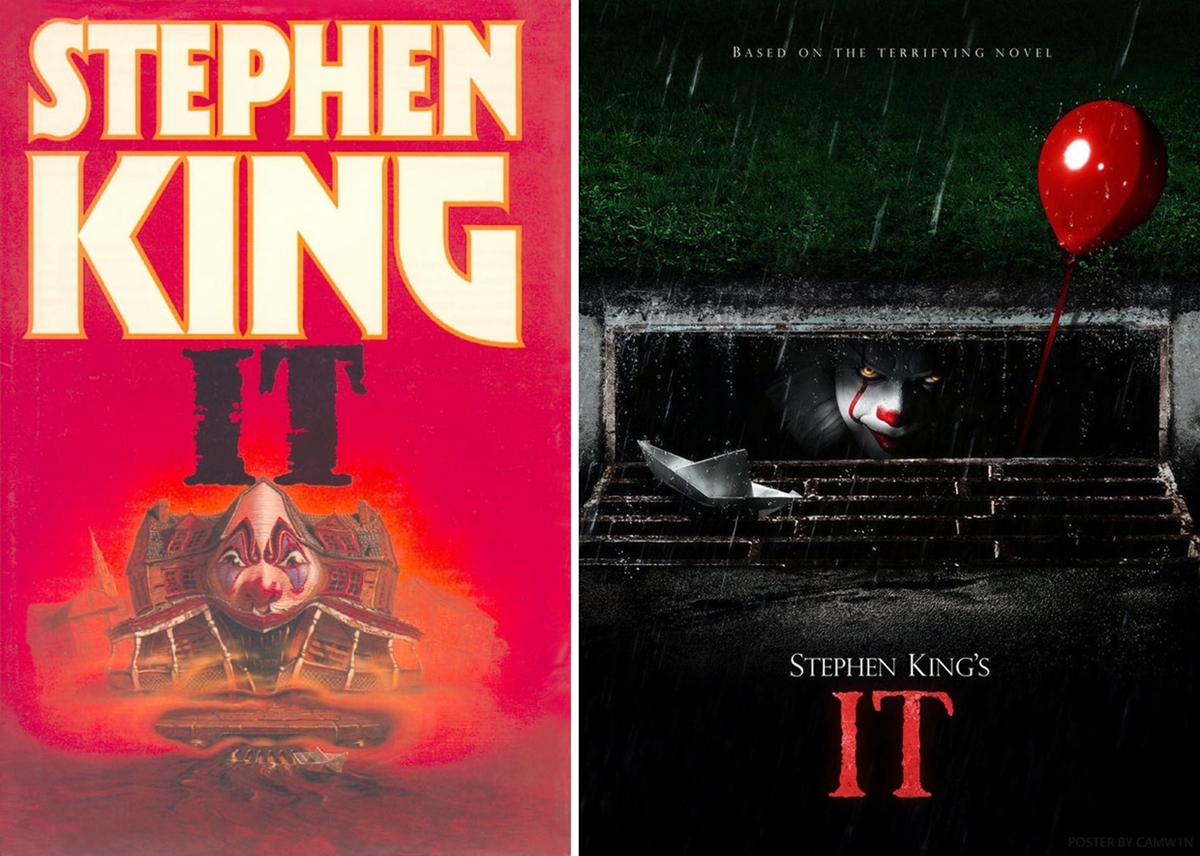 The original 1990 TV mini-series based on King’s epic 1986 novel It is very close to the heart of many, thanks to Tim Curry‘s unforgettably creepy performance. However, there’s still a lot to be said for director Andy Muschietti’s two-part big screen adaptation, which casts Bill Skarsgård as the other-worldly evil entity in the form of Pennywise the Clown.

Some fans of the novel were upset that the movie shifted the action in the childhood scenes from the 50s to the 80s, and most viewers and critics seem to agree that the contemporary-set It Chapter Two proved a disappointing conclusion. All in all, though, the big screen It makes for powerful, memorable experience. 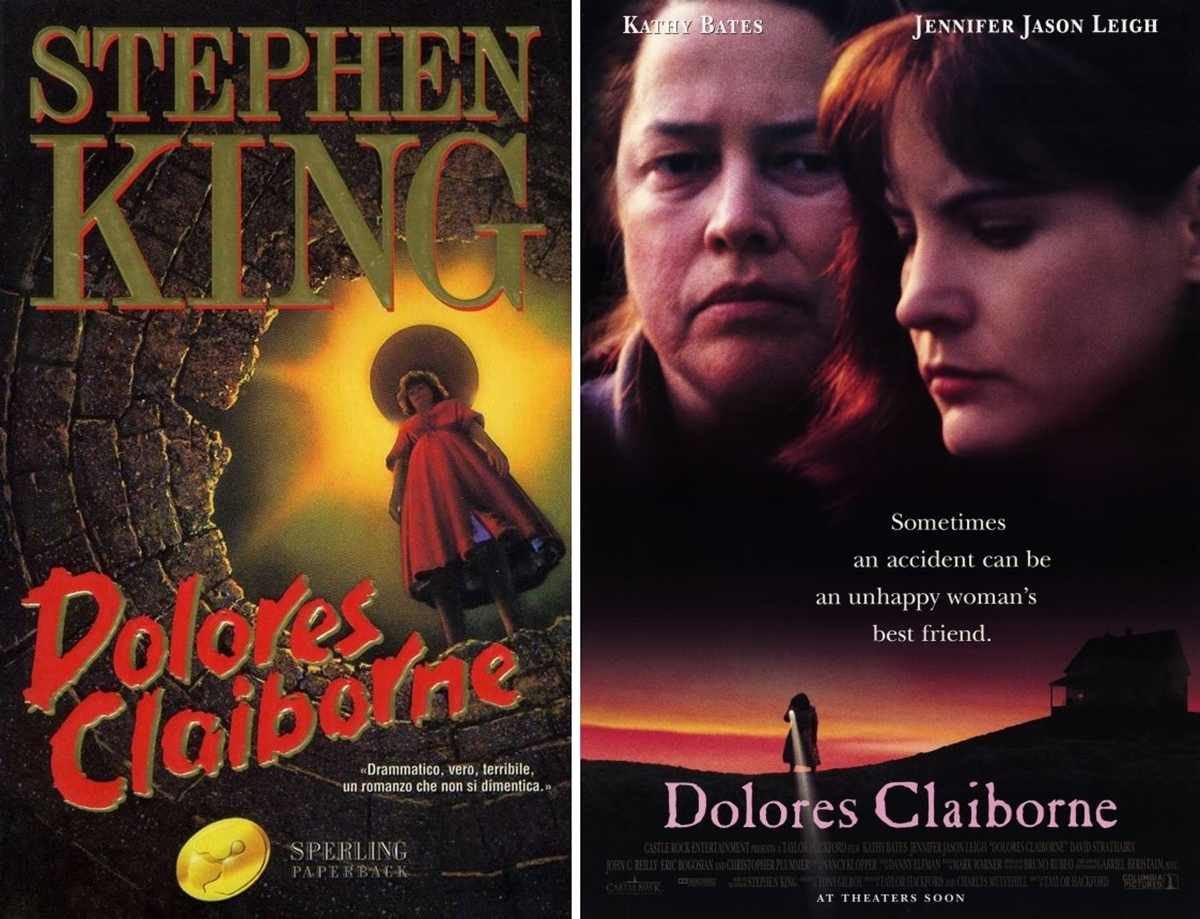 Neither the 1992 novel nor director Taylor Hackford’s 1995 film adaptation are necessarily the most celebrated Stephen King works. However, If you’ve never watched Dolores Claiborne then you really are missing out, as it is a powerful psychological thriller about the relationship between a mother and her daughter.

While King is typically thought of as the master of horror, Dolores Claiborne is one of his many great stories that takes a more grounded and realistic approach with no supernatural elements. It works brilliantly on screen in large part thanks to the excellent performances from Jennifer Jason Leigh and Kathy Bates (the latter of whom appeared in another great King movie we’ll come back to). 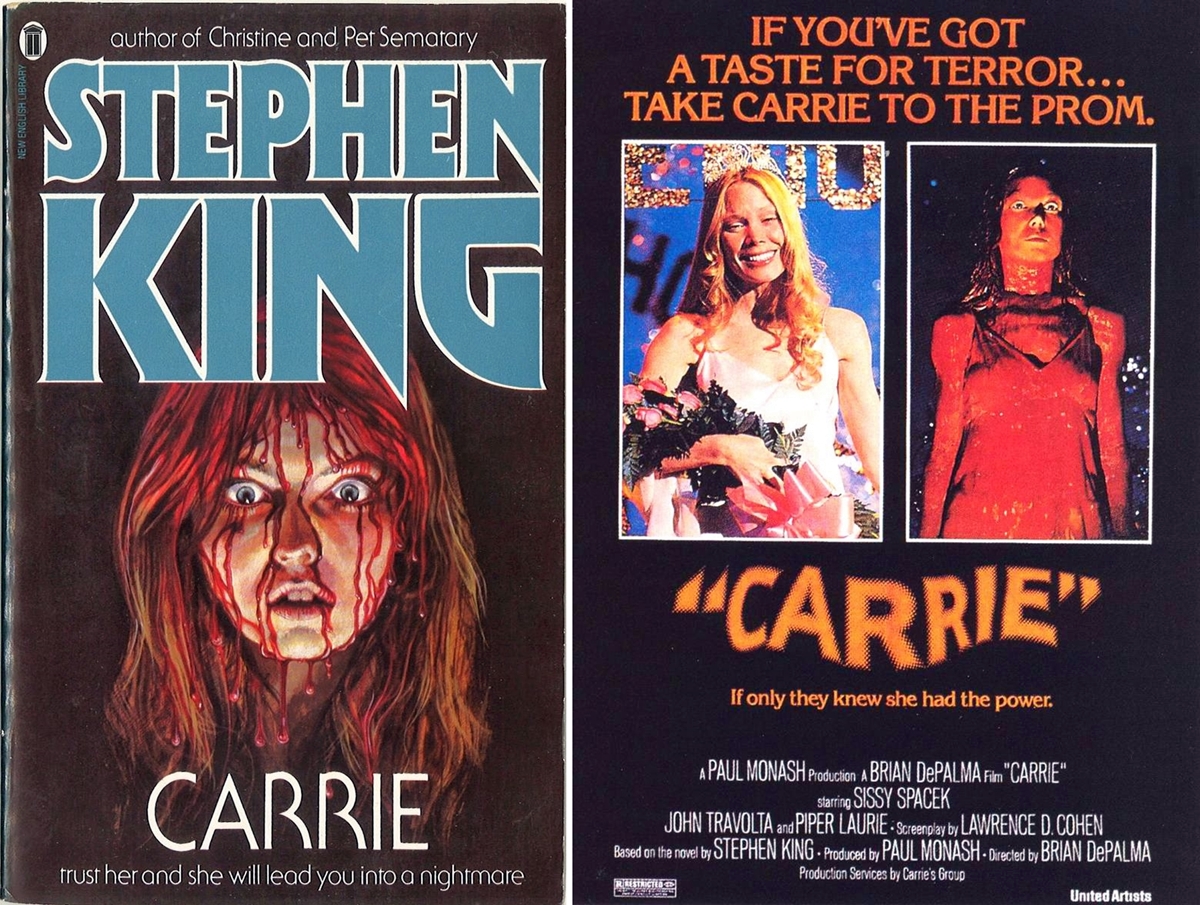 This is the one that started it all. As well as being Stephen King’s first published novel back in 1974, the 1976 film from director Brian DePalma was the first screen adaptation of the author’s work. Carrie’s critical and commercial success prompted a rush of interest in King, soon making him one of the best-selling and most heavily filmed authors of the era.

Sissy Spacek earned an Oscar nomination for her haunting performance in the title role, as did Piper Laurie for her turn as Carrie’s puritanical mother. The story has since been adapted to the screen twice more (in the 2002 TV movie and 2013 film), but neither came close to the power of the 1976 original, famed for its intense final act and unforgettable shock ending. 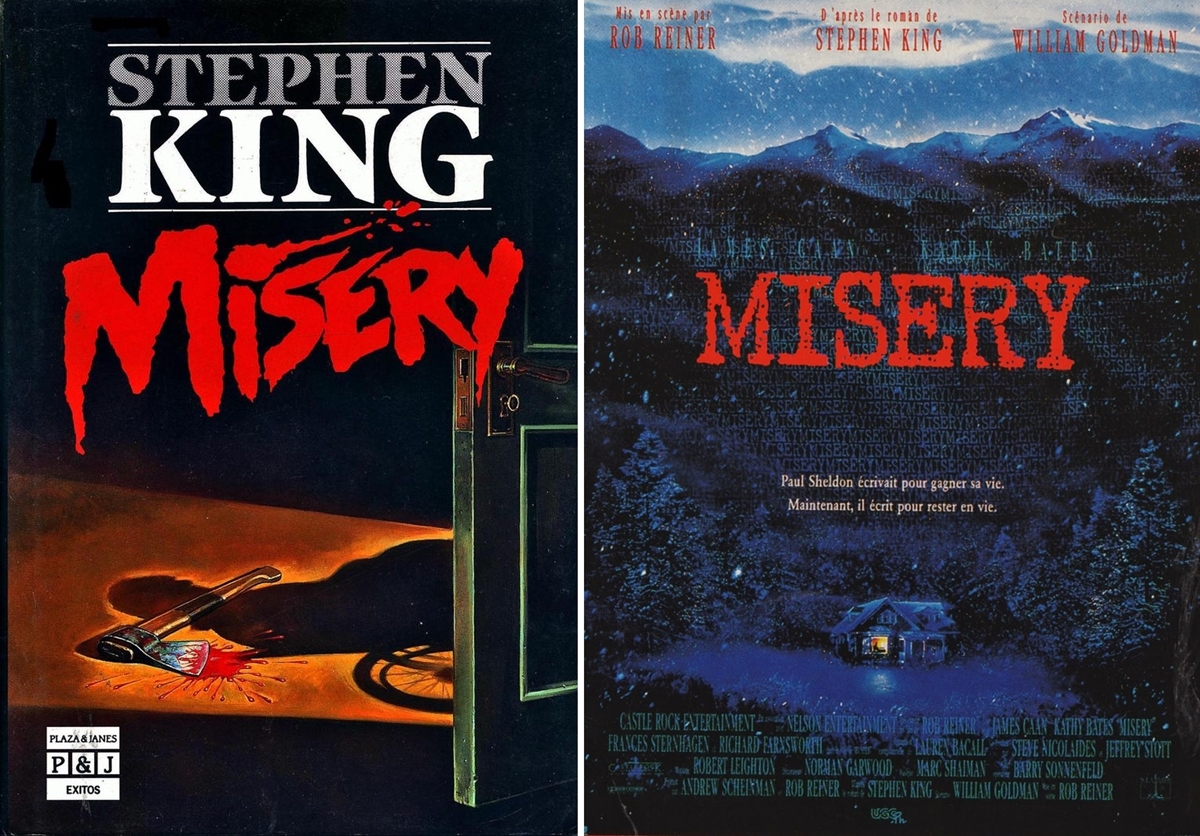 The second King adaptation from director Rob Reiner, this 1990 take on King’s 1987 novel Misery centres on a romance novelist who, following a car accident, finds himself trapped in the house of an obsessive fan. After reading his latest manuscript, the fan is less than happy with how the story ends, and becomes deeply unhinged.

James Caan takes the lead as writer Paul Sheldon, but the show is completely stolen by Kathy Bates as the obsessive Annie Wilkes. Bates’ performance earned her the Best Actress Oscar, which is to date the only Academy Award won by a Stephen King adaptation. 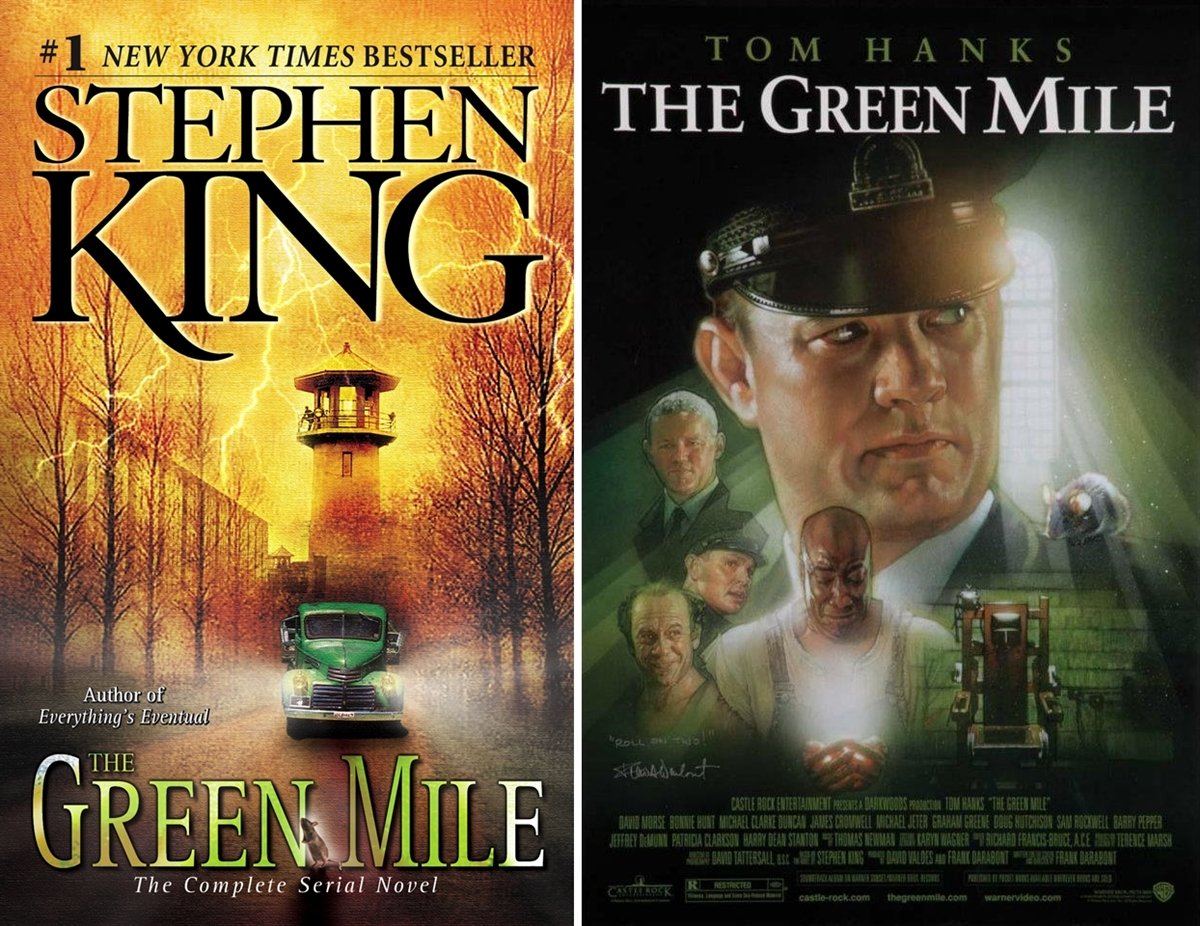 The second Stephen King adaptation from writer-director Frank Darabont, 1999’s The Green Mile is based on King’s 1996 novel of the same name. Tom Hanks stars as a warden overseeing Death Row prisoners, whose life is changed when he encounters a hulking but kindly African-American convict, played by Michael Clarke Duncan.

While The Green Mile includes supernatural elements, it’s a film largely based in harsh reality which puts the viewer through the wringer emotionally. As always, Tom Hanks is superb, but the sadly missed Michael Clarke Duncan gives the most memorable performance, earning a Best Supporting Actor Oscar nomination for his efforts. 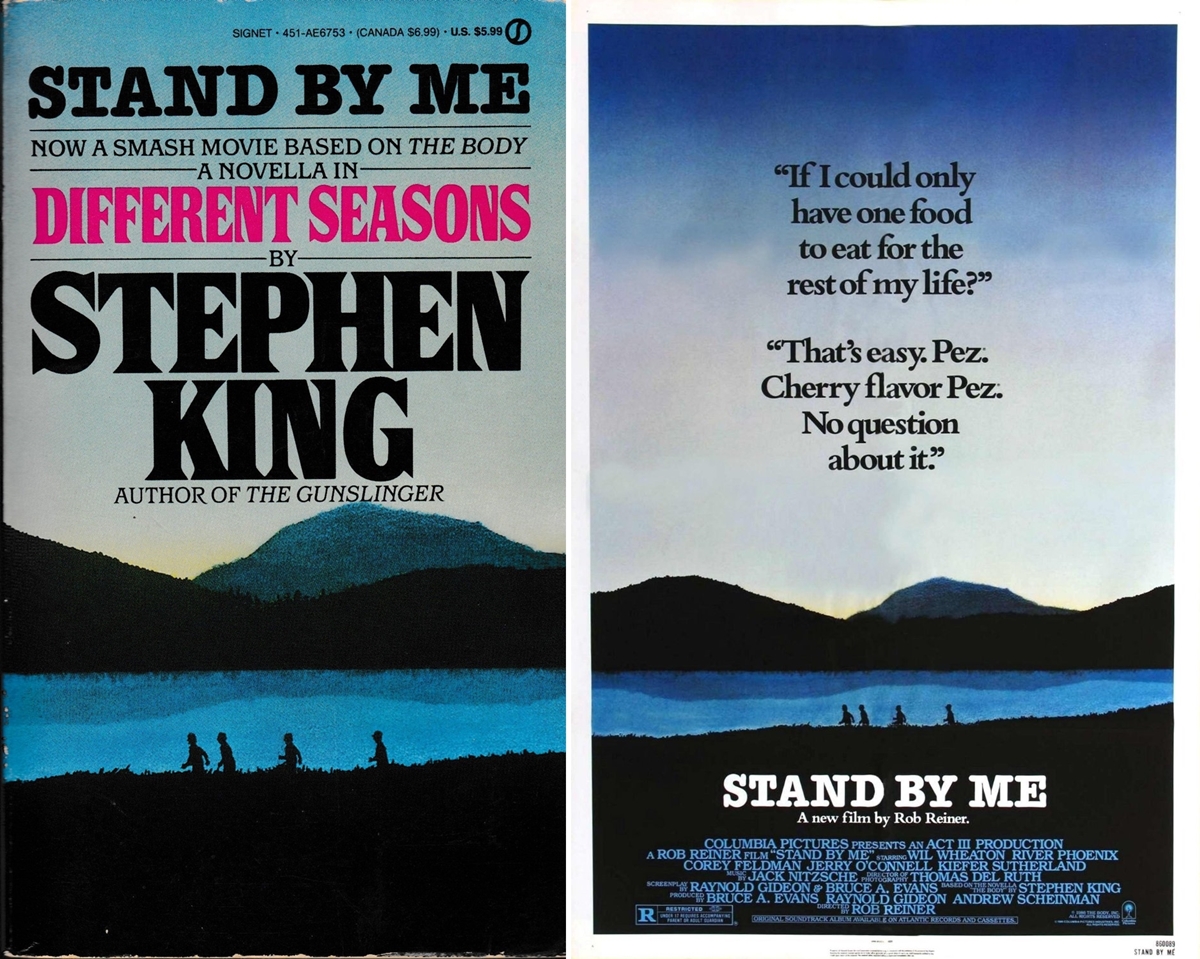 Arguably, it wasn’t until the release of this 1986 adaptation of Stephen King’s 1982 novella The Body that the wider audience realised there was a lot more to King than just horror. Stand by Me sees four young friends venture out into the wilderness to locate the corpse of a missing teenager, learning a great many life lessons along the way.

One of the best-loved coming-of-age dramas ever made, Stand by Me is widely renowned as one of the most poignant films of the 1980s. It became even more poignant following the early death of actor River Phoenix, who gave his breakthrough performance here as Chris Chambers. 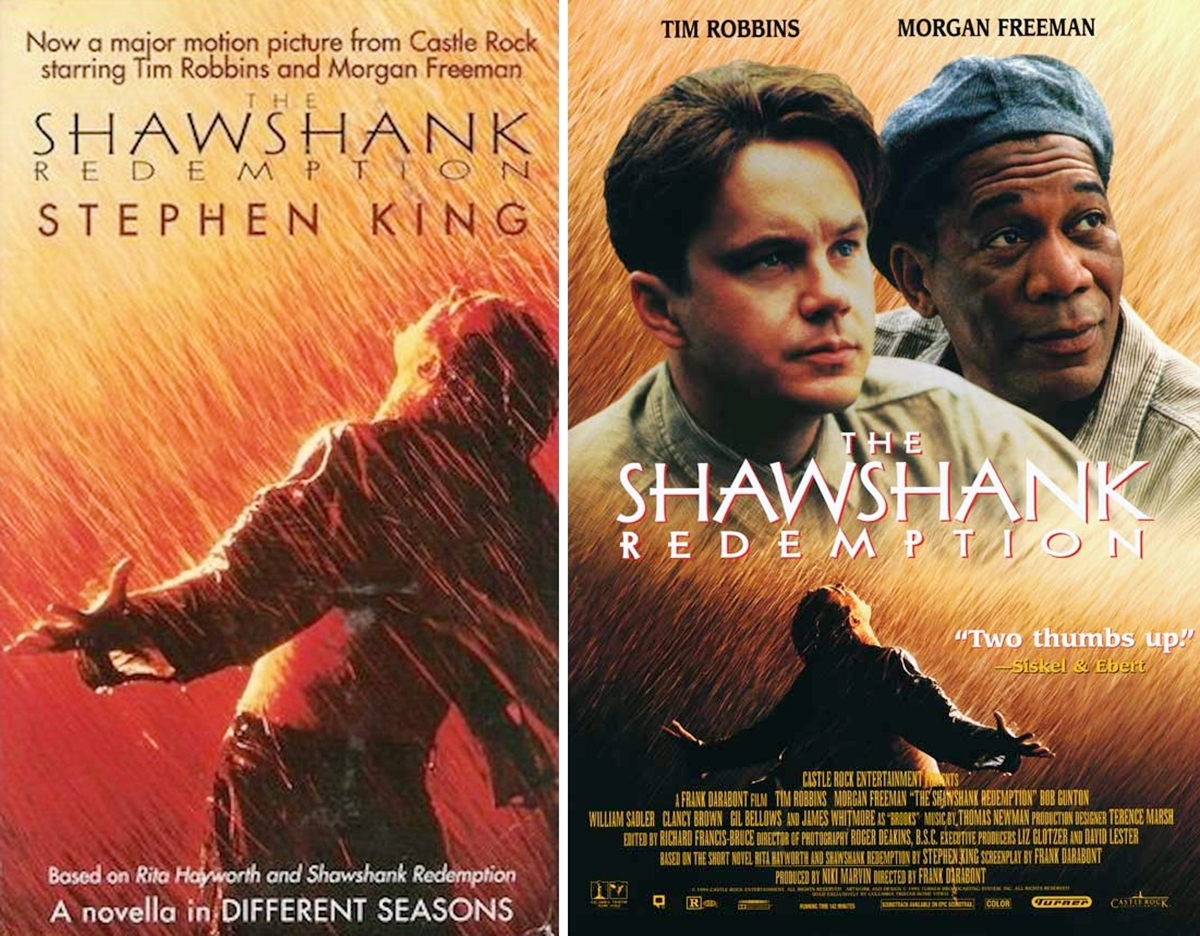 Frank Darabont made a triumphant debut as writer-director on his 1994 adaptation of Stephen King’s 1982 novella Rita Hayworth and the Shawshank Redemption. Notoriously, the film was largely ignored by the wider audience on release, but developed an enthusiastic following with time, and is now widely considered one of the greatest films of the 1990s.

Tim Robbins gives a compelling performance as prisoner Andy Dufresne, but The Shawshank Redemption really helped make a superstar out of Morgan Freeman, whose evocative narration really gives the film its soul. 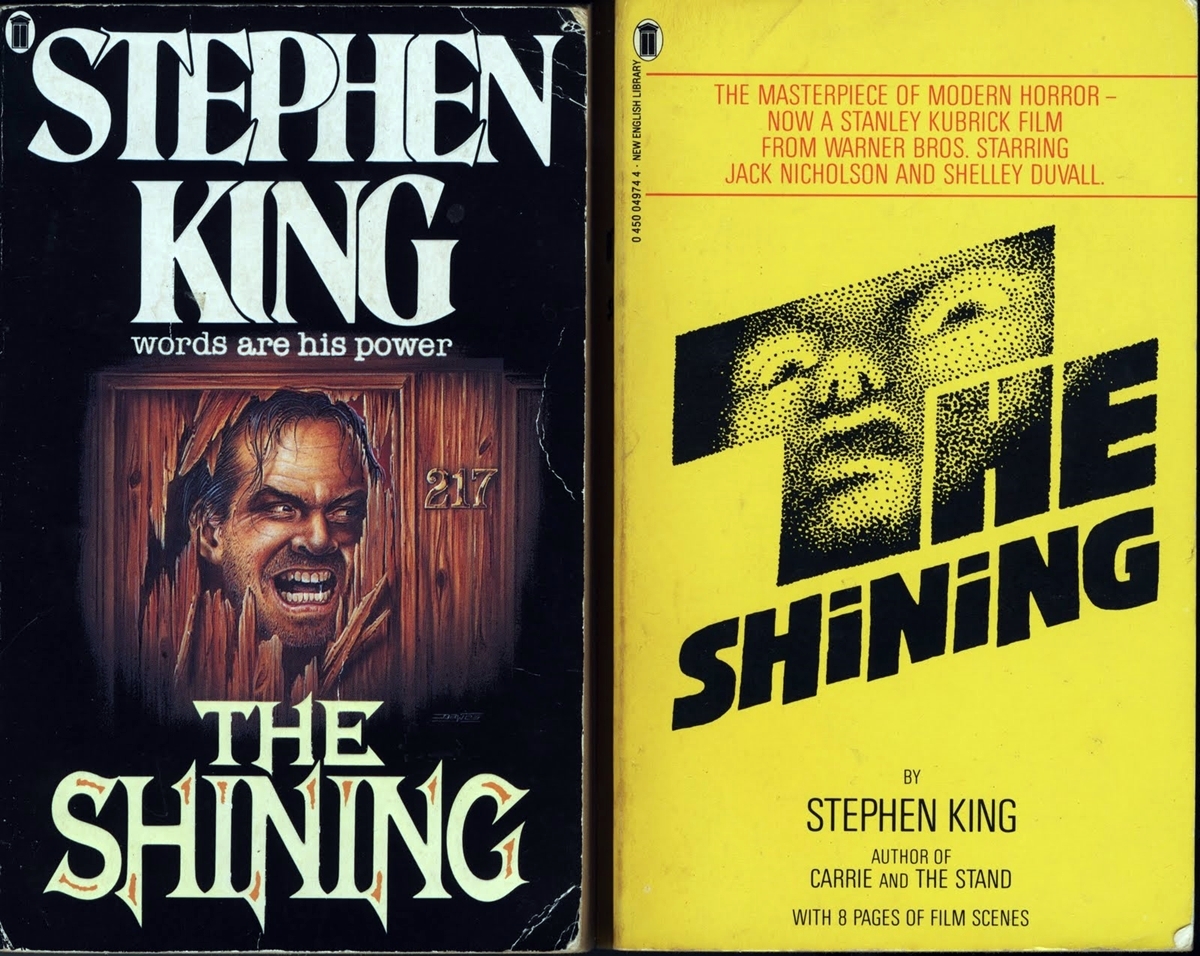 Director Stanley Kubrick’s 1980 adaptation of King’s 1977 novel is, in the eyes of many, the single greatest horror film of all time. Thanks to its haunting imagery and atmosphere, and compelling central performances from Jack Nicholson and Shelley Duvall, The Shining is a film that burns itself into the memory of everyone who sees it.

The Shining has proved controversial over the years, thanks to King’s outspoken criticism of the film (the author was upset by how much of his novel was left out), as well as stories of Kubrick’s cruelty to his cast, Shelley Duvall in particular. Even so, there’s no question that the last four decades of horror would have been very different without this movie.