This New Children’s Book About Sex Is VERY Graphic

A children’s book about sexual intercourse that is now available in Australia has divided opinion amongst parents, with some arguing that it is far too graphic and inappropriate for kids.

The book describes both parties as being like a ‘jigsaw puzzle’ where both parties get a ‘tingly, excited, very loving feeling.’ 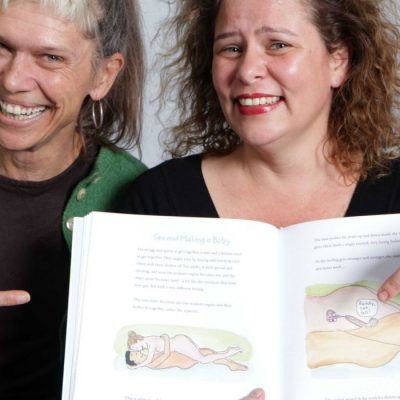 It is available on the shelves of Kmart for $12 and is called ‘The Amazing True Story of How Babies Are Made, by Fiona Katauskas. It is a picture story book that makes ‘sex-ed honest’.

Not everyone approves of this being a get-out for parents not wanting to have the ‘birds and the bees’ conversation. Some have called it ‘inappropriate,’ but others have defended the book, calling it simply ‘a fact of life.’ 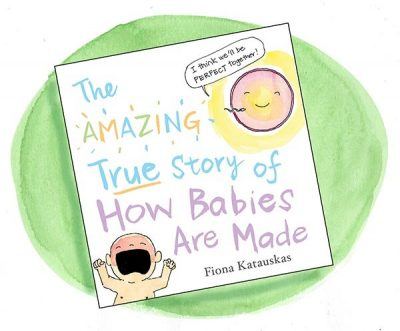 The picture book starts with ‘Sex and making a baby,’ where it depicts a naked man and woman lying together, smiling and looking lustfully into each others eyes. It then goes on to give a detailed explanation of the process that leads to an egg and sperm coming together.

The book also outlines foreplay without sugarcoating it for five-year-olds. As for the business itself, detailing the intimate moments, Ms Katauskas’ book includes a diagram of the man’s penis inside the woman’s vagina. 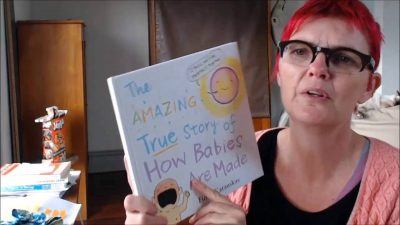 The detailed explanations of these very adult moments have divided parents of Facebook, we some criticising it as too explicit and others defending it as a necessary tool to educate children.

One parent wrote ‘What is wrong with the world?’

‘Omg really? There is time for all this c**p, just let kids be kids they don’t need to know the finer details,’ said another.

‘Get a life people, you don’t have to buy the book and there is no chance of your kids picking it up in the shop to look at if they are properly supervised,’ a defended parent wrote.

‘Parents buy books like this for kids as a way of teaching them, if you don’t want to buy it, don’t buy it,’ another said.

‘Seriously this is inappropriate to be in a kids section,’ one comment said. 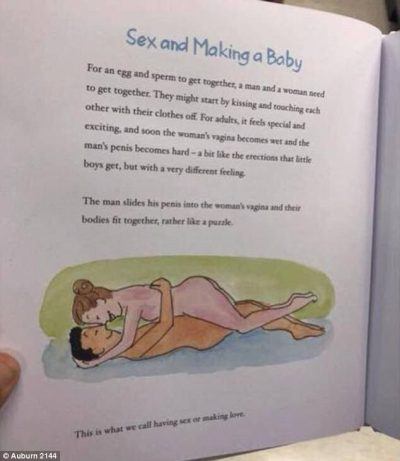 Ms Katauskas says on her website that the idea behind the book come from her struggles to answers a question from her eldest son: ‘Where do babies come from?’

‘It turned out many of my friends had experienced the same frustration with finding a good sex ed book so I decided to have a go at writing one myself,’ Ms Katauskas said.

‘Firstly, I wanted it to be straightforward and honest.

‘Secondly, I wanted it to include alternative but increasingly common methods of conception such as IVF, sperm and egg donation as well as different types of families and parents.’ 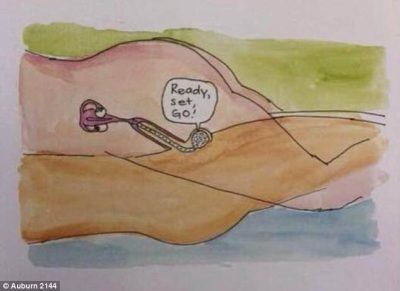 The book has seen mostly positive reviews. Child Magazine has said: ‘If you’re looking for a book for children that’s accessible but honest, sex positive and inclusive, The Amazing True Story Of How Babies Are Made is pretty much perfect.’

Buzzword books say: ‘Common sense, facts, the delightful humour and illustrations will enable this book to be universally accessible and a joy to be shared. A must buy for all parents.’ 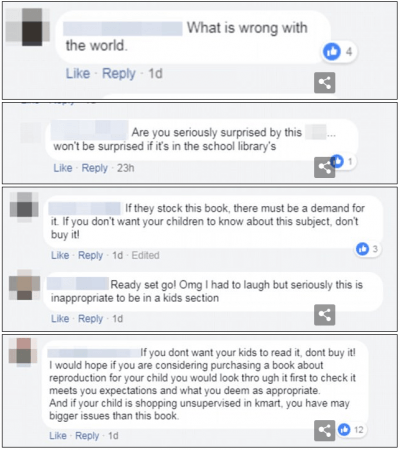 ‘Highly recommended … a necessary addition to every parent library’ – ReadPlus.com.au

The author’s biography on her publishers’, Harper Collins, website says: ‘Fiona Katauskas is a cartoonist and illustrator based in Sydney. Her work has appeared in a wide range of publications, including the Sydney Morning Herald, The Australian, The Age. She has also designed cards for the Ink Group and T-shirts for Mambo.’

So will you be buying