On Twitter, Mr James Breakwell goes under the handle ‘@XplodingUnicorn.’ His small bio says that he’s a: ‘Comedy writer. Pig owner. Dad of 4 girls ages 7 and under. Internet famous. Real-life nobody. My book saves lives.’

Most of his comedy comes from conversations with his daughters, which luckily for us, he shares with the rest of the world in a series of tweets. Young children are innocent and often have no filter when it comes to things they say.

This exchange is brutally honest, and we have to agree with the daughter here. Her mother is only a mother because of her, so it’s only fair that she shares some of her mother’s day gift with her right? 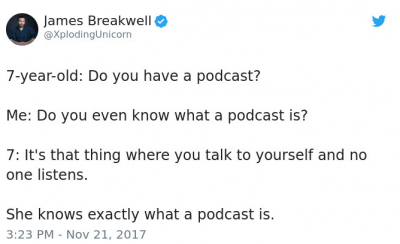 This is an honest review of a podcast. If you like talking to yourself but don’t want anyone to hear it…record it and put it out as a podcast. We can guarantee that you’ll be the only person to hear its contents. 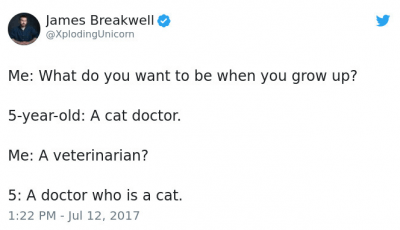 When his five-year-old said that she wanted to be a cat doctor, she meant it literally. She wants to be a doctor who is a cat, not a doctor who looks after cats. The world is your oyster my friend. 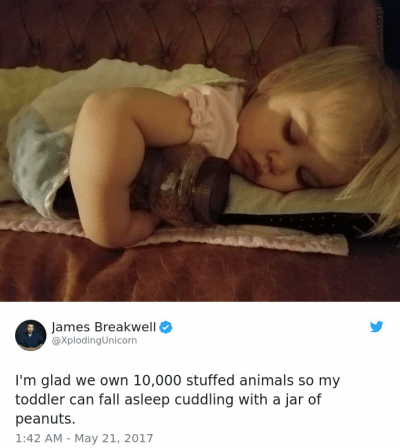 This girl has forgone the traditional teddybear in favour of a jar of peanuts. Well, you may as well go to sleep holding something that you love. If that’s the case, I’m taking a big wheel of cheese to bed with me tonight. 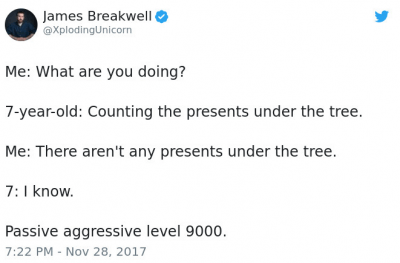 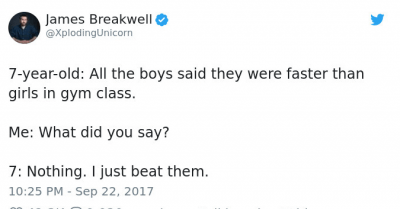 This is the best way to silence those haters! There’s nothing more satisfying in this world than proving somebody wrong, and James’s 7 year old daughter proved them wrong in the most fabulous way possible. 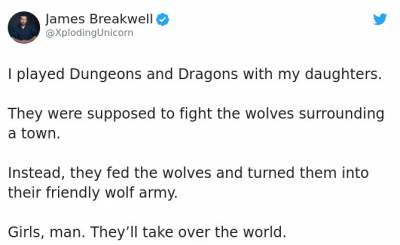 If you can’t beat them, feed them! If all wars worked like this, the world would be a lot more harmonious place. Imagine surrounding your enemy and they just started handing out KFCs, I’d be joining them like a shot (other fried chicken restaurants are available, but probably aren’t as good.) 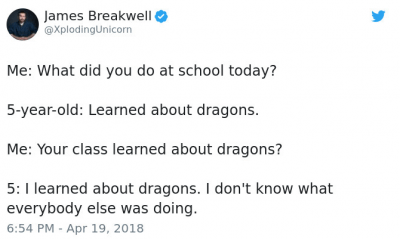 This five year old is ripping up the curriculum and doing her own thing! Who needs to learn about the circumference of a circle when you can learn about the wingspan of a dragon instead?

Fair point! If boys are allowed to go to school, why can’t dogs? Most dogs are better behaved than boys, are more hygienic and don’t make as much of a mess. They will also sit when told to. 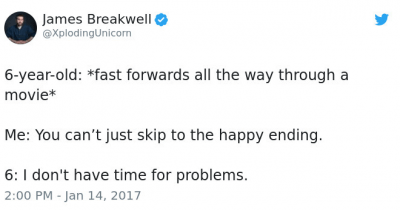 Sassiness level – 100. Why waste your time going through all the problems of a movie when you can just skip to the part where they’re all resolved? Game of Thrones would be much quicker if you only watched the last episode (hurry up HBO, I wanna see!)

Brutal and honest. Maybe if this girl had done what her sister did and take it upon herself to learn about dragons, she would have had an amazing day at school! 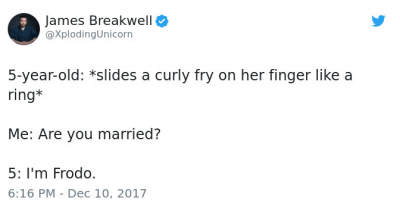 Who wants to be married when you can be Frodo? We think that if Sauron forged the one ring from a potato, then then series would have been a whole lot different. Sam could have eaten it at the beginning of the Fellowship and that would have been that. 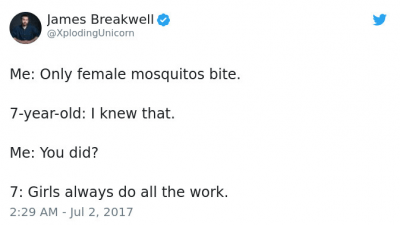 The great and magnificent Beyonce once asked ‘Who run’s the world?’ The answer, of course, is ‘girls.’ She may be seven, but this girl already know that men are lazy and it’s the females that do most of the hard grafting in this life. 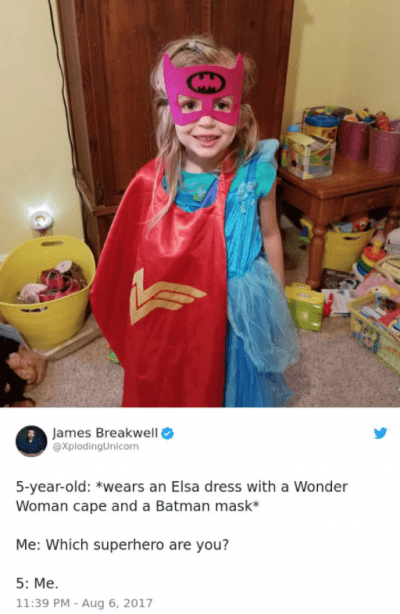 Why be another superhero when you can be your own superhero? This one is a combination of Elsa, Wonder Woman and Batman. I would love to see what superpowers she has.

It’s all of our ambitions to be a teacher at Hogwarts, and what better a subject than Defence Against the Dark Arts. We’re assuming this is post-Voldemort’s death, because before this, the post was cursed and every Defence Against The Dark Arts left after one year in the post. 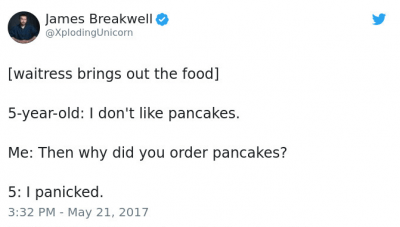 We have a problem with this one! Who doesn’t like pancakes? I can’t ever remember being in a restaurant and ordering something in panic that I didn’t want. To be fair, I am the least fussy person when it comes to food, so I can never make a wrong choice. 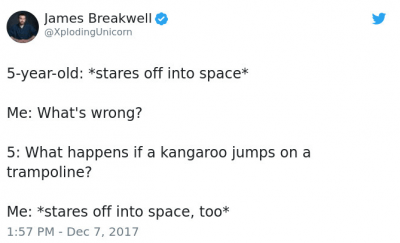 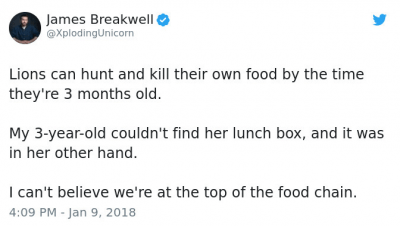 We sympathise with this girl, because we’ve all spent ages trying to look for the TV remote or a pair of glasses when they’re either in our hand or on our head. In fact, I think I may have left my keys around here somewhere…

Swimming is basically just trying to no drowned, and this girl sums up the experience of swimming perfectly. It’s a lot of work to stay alive, so we’re not surprised that this girl is tired.

We think this every morning when we get up. We shouldn’t have to go to bed earlier, the morning should simply delay itself so that we were able ti get more sleep. Problem solved. 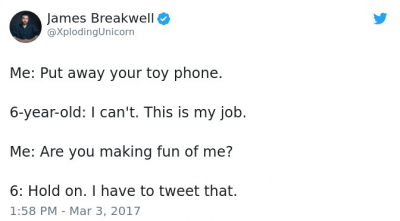 This girl is aware that her father tweets about their conversations and his making fun out of him in the best way possible. We’re not sure how successful she will be though tweeting on a toy phone. 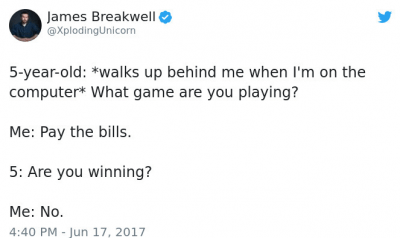 Paying the bills is not a game that we like to play, but is a game we must all play. It’s a game with no winners, unless you’re the person receiving the money. One day, this girl will understand.

If you’d like to see more of Breakwell’s encounters with his daughter, head over to his Twitter @XplodingUnicorn. There’s hours of entertaining conversations on there to scroll through.