Paul Simon shot to fame in the 1960s as one half of American folk rock duo Simon & Garfunkel. The pair went on to become one of the decade’s most popular bands, and although they split acrimoniously in 1970, Simon’s career was far from over: he went on to release three top 5 albums between 1970 and 1975, and in 1986 released his most popular and acclaimed work, Graceland, considered one of the greatest albums of all time.

Simon’s contributions to music have not gone unnoticed: in 2006 he was selected as one of the 100 People Who Shaped the World by Time and in 2015 he was ranked eighth in Rolling Stone’s list of the 100 Greatest Songwriters of All Time.

Here are 10 things you never knew about this music legend.

10. He’s sick of being compared to Bob Dylan

Being an influential folk-rock artist, Paul Simon has been compared to Bob Dylan a lot over the years. And according to Simon, the incessant comparisons have led to a fair amount of tension between the two of them. “I usually come in second [to Dylan], and I don’t like coming in second,” Simon told Rolling Stone in 2011. “In the beginning, when we were first signed to Columbia, I really admired Dylan’s work. The Sound of Silence wouldn’t have been written if it weren’t for Dylan. But I left that feeling around The Graduate and Mrs Robinson. They weren’t folky anymore.”

“One of my deficiencies is my voice sounds sincere. I’ve tried to sound ironic. I don’t. I can’t,” he continued. “Dylan, everything he sings has two meanings. He’s telling you the truth and making fun of you at the same time. I sound sincere every time.”

9. He recently sold his entire song catalogue to Sony 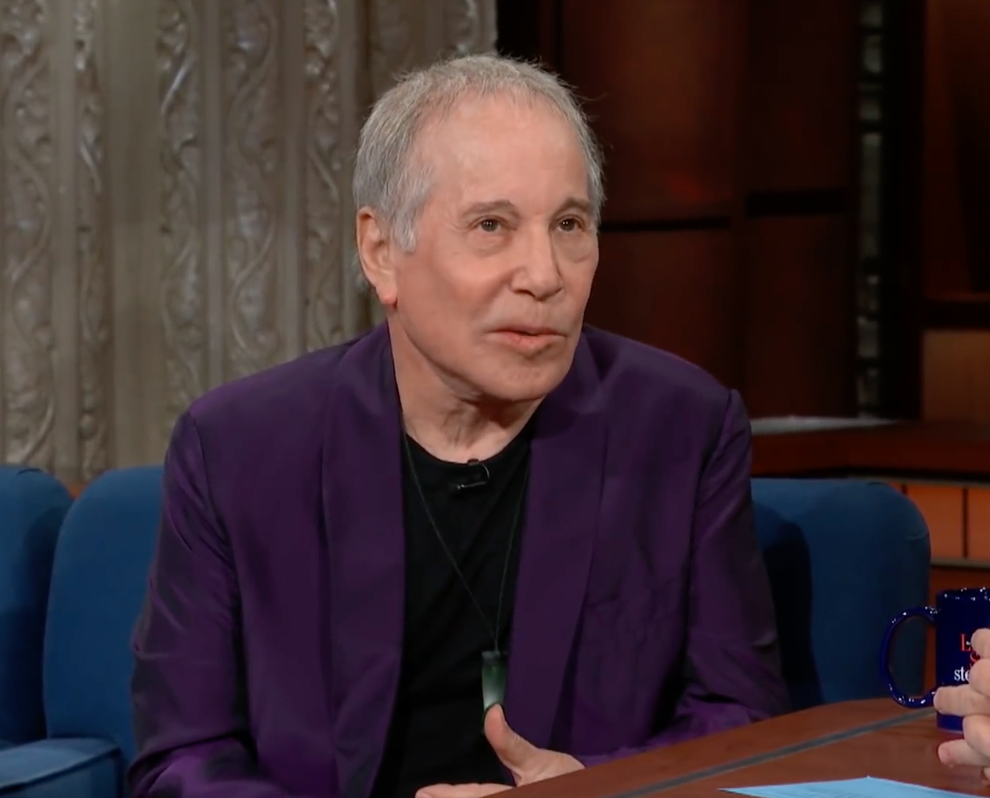 In recent years, many older musicians have decided to cash in on their life’s work and sell the rights to their songs for huge lump sums. Bob Dylan, Neil Young, and Stevie Nicks are all musicians who have sold their entire catalogues recently – with Dylan raking in an estimated $300 million from Universal Music for the rights to all his songs.

In April 2021, Paul Simon became the latest music legend to cash in on his material, selling his entire catalogue to Sony for an undisclosed amount. Simon said of the deal: “I’m pleased to have Sony Music Publishing be the custodian of my songs for the coming decades. I began my career at Columbia/Sony Records and it feels like a natural extension to be working with the Publishing side as well.” Sony Music Publishing’s chief executive, Jon Platt, said it was an “incredible honour” to acquire the rights to Simon’s music.

8. Kathy – the subject of Kathy’s Song – broke up with him in the early 60s as she didn’t want to be famous 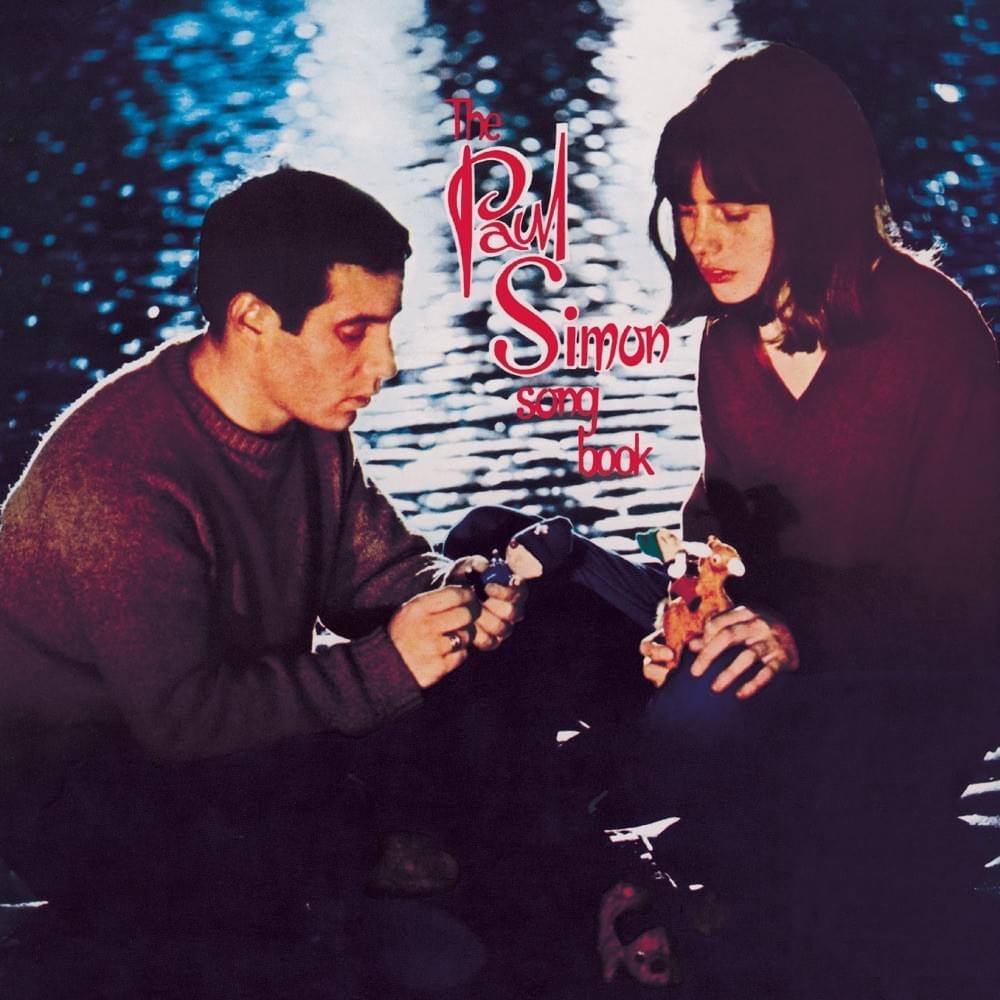 Simon moved to England in 1964 where he continued to work on his music and befriended contemporary folk musicians Bert Jansch, Martin Carthy, Al Stewart, and Sandy Denny. The first folk club Simon performed at in England was the Railway Inn Folk Club in Essex, where he met 16-year-old Kathleen “Kathy” Chitty, who was working as a ticket seller at the venue. The two began a relationship, and later that year toured the US together.

Their romance was short-lived – Kathy was quite shy and did not want to get wrapped up in Simon’s growing fame, as when The Sound of Silence was released in 1965 it quickly became apparent that Simon & Garfunkel were destined for international success. By January 1966, the song had sold over one million copies, and Kathy and Simon parted ways. Kathy is referred to in several of Simon’s songs, including Kathy’s Song, America, Homeward Bound and The Late Great Johnny Ace. There is also a photo of Simon and Kathy on the cover of The Paul Simon Songbook.

7. He cites Sam Cooke, Elvis, and The Everly Brothers as his biggest influences

Today, Simon is widely considered one of the most influential artists in modern times. But who influenced Simon? Speaking to Spin in 1987, Simon revealed which artists shaped him most. He called Sam Cooke “a big influence”: “I don’t think anybody was in Sam Cooke’s league. And he also tended to be more of a soft singer and phraser, so there was more for me to learn because that’s what my voice is naturally […] I was a big Sam Cooke fan, still am.”

He went on to call Elvis “the most important force in rock ‘n’ roll.” “It was his invention, he blended black and white music, and that’s the single most powerful idea that’s emerged from rock ‘n’ roll,” he said. Simon also added that there “wouldn’t have been a Simon and Garfunkel without the Everly Brothers.”

6. He was criticised in 1987 for breaking the UN’s cultural boycott of South Africa 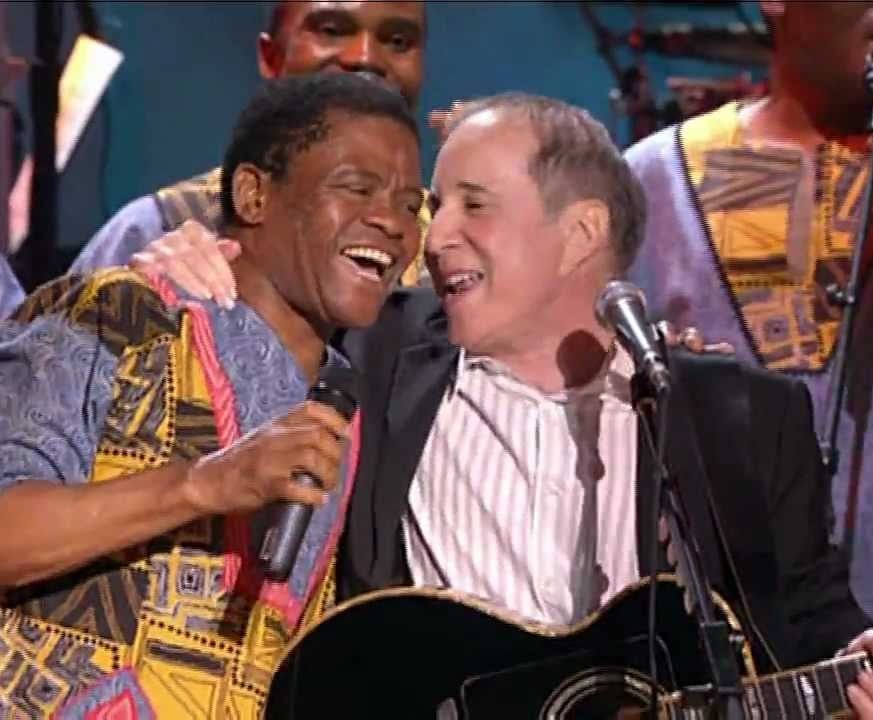 Back in 1986, following the release of Graceland, Simon was criticised for breaking the UN’s cultural boycott of South Africa. Simon was accused by anti-apartheid organisations such as Artists United Against Apartheid of damaging solidarity and undermining the cultural boycott. Speaking to Spin in 1987, Simon spoke out about the controversy, and stressed that he’d simply intended to amplify the voices of black South African musicians.

“I don’t think the boycott was intended to block black South African musicians from access to the international music community. I think it was to block the white, discriminating community there from outside nourishment,” he said. “But I certainly support the cultural boycott as a means for the artistic community to express moral outrage. But on the other hand, the de facto black musicians union over there is very frustrated at not being able to get their music heard in the world community. They felt they were the victims of a double apartheid, where they were being repressed at home, and then when they were trying to get their music outside, people were resistant to it because they were South African.”

5. It took him almost no time to write Bridge over Troubled Water

I have never seen a songwriter break down — note by note — the process by which he wrote a tune like @PaulSimonMusic does here with “Bridge Over Troubled Water”. (1970)

What a joyful exchange. 🙏🏼

It’s not uncommon for some of the most beautiful songs in pop music to be written in a flash – take Paul McCartney’s Yesterday, for example. One of Simon & Garfunkel’s biggest hits, Bridge over Troubled Water, was likewise written by Simon in almost no time at all. Apparently the song was composed so quickly that Simon asked himself “Where did that come from? It doesn’t seem like me.”

He recalled the song’s composition in the 2011 documentary The Harmony Game. “I have no idea where it came from… It just came, all of a sudden,” he said. “I remember thinking this is considerably better than I usually write.” He went on to call the single “my greatest song … my ‘Yesterday.’”

Back in 1972, in an interview with Rolling Stone, Simon discussed his feelings towards ex-Beatle John Lennon’s latest single, Power to the People. Simon clearly wasn’t a fan of Lennon’s anti-establishment message, saying: “It’s a poor record, a condescending record. Like all of these cliché phrases, they’re dangerous. What does that mean — power to the people? And who is he saying it to? Is he saying it to people who have any idea what it means?”

Simon continued: “Isn’t it really a manipulative phrase? And since he’s picking it up, consciously aware that this is going to be broadcast over the air waves, my question is, who is he manipulating and for what purpose? That’s even putting aside the question of whether he has the qualifications to manipulate, because obviously you don’t even need any qualification to manipulate in this country. Anybody who wants to manipulate can.” Lennon doesn’t seem to have been a fan of Simon’s either, and in 1979 referred to him as “the singing dwarf.”

3. Art Garfunkel has called Simon a “jerk” and a “monster” 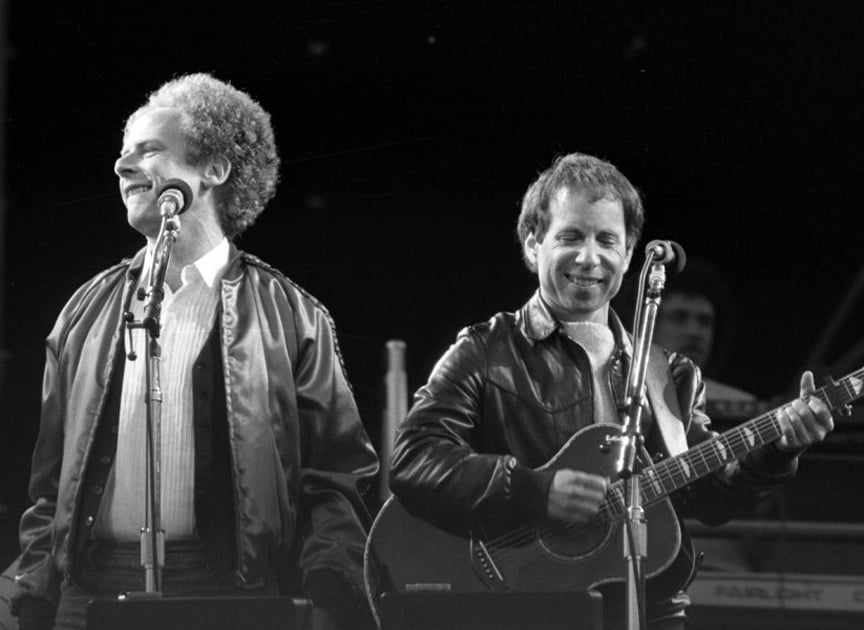 As well as Bob Dylan and John Lennon, Paul Simon has feuded with his own bandmate Art Garfunkel. Speaking to the Telegraph in 2015, Garfunkel recalled his thoughts after Simon walked out on the band in 1970: “How can you walk away from this lucky place on top of the world, Paul? What’s going on with you, you idiot? How could you let that go, jerk?”

Garfunkel went on to suggest that he only made friends with Simon as a child because he felt pity for him given his short stature (Simon stands at 5’2″). “And that compensation gesture has created a monster,” Garfunkel surmised.

2. He wrote and starred in a distinctly average semi-autobiographical film called One-Trick Pony 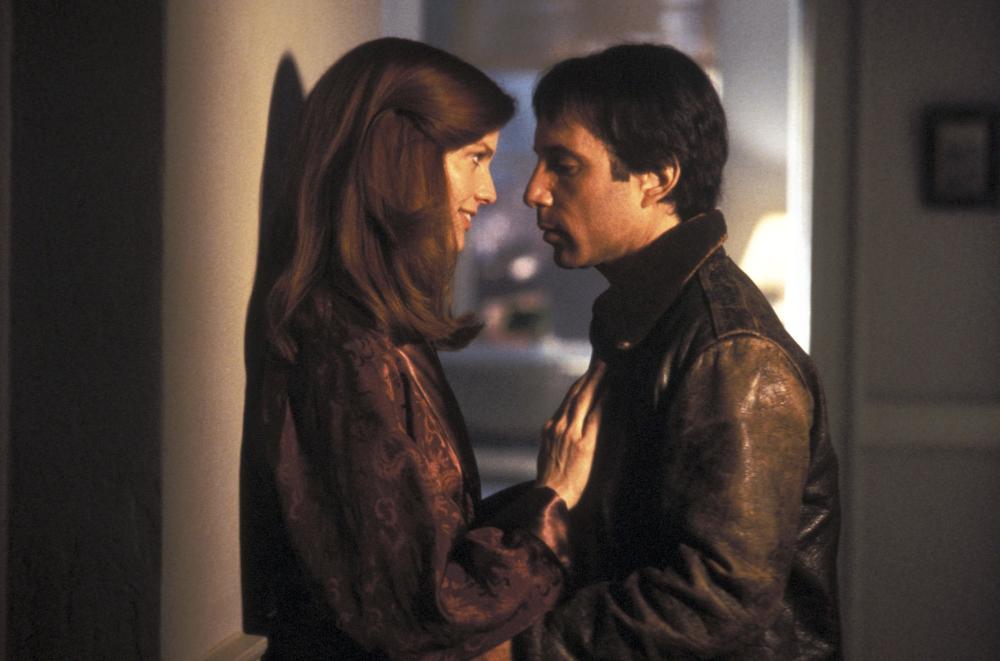 Simon’s acting career began when he appeared in Woody Allen’s 1977 film Annie Hall as record producer Tony Lacey. Then in 1978 he appeared as himself in the Rutles’ film All You Need Is Cash. In 1980, he went on to release One-Trick Pony: a semi-autobiographical film which Simon wrote, scored, and starred in.

Simon stars as Jonah Levin, a musician past his glory days who is struggling to work in the early 80s. “It’s really more a character study than it is a plot, or adventure story,” Simon said of the film in a 1980 BBC interview. “It’s about people I’ve known, composites of people. Maybe it doesn’t translate outside the world of rock and roll, or rock culture.” The film holds an average rating of 45% on Rotten Tomatoes.

1. He gave Miley Cyrus a life-changing piece of advice

Speaking to Howard Stern in December 2020, pop star Miley Cyrus revealed that Paul Simon once gave her a life-changing piece of advice. On the show, Cyrus admitted to struggling with balancing keeping her fans happy by playing older, more popular songs and staying true to herself by playing newer material that she preferred. She then revealed that it was Simon who steered her in the right direction and reminded her that her fans deserved to hear what they loved.

“I was backstage with Paul Simon, for, I think SNL 40, something like that. And he was asking me about my set, and he didn’t know any of the songs in my set,” Cyrus recalled to Howard Stern. “He was like, ‘You’ve gotta do the hits… For your whole show, it’s going to be 90 minutes, you’re going to sing one song that you like. And the rest [of the songs] you wanna make sure that everyone that paid money to come see you [loves them].’ I think I added in ‘Wrecking Ball’ like the next day.”