20 Things You Might Not Have Realised About Indecent Proposal

How much are you worth? That’s the question posed by the 1993 film Indecent Proposal, which sees a married couple’s life fall into turmoil when a stranger offers them one million dollars for the wife to spend the night with him.

Directed by Adrian Lyne and starring Robert Redford, Demi Moore and Woody Harrelson, Indecent Proposal is one of the most divisive films of the 1990s. Below are 20 things you never realised about this controversial classic.

20. Halle Berry was interested, but was rejected on racial grounds 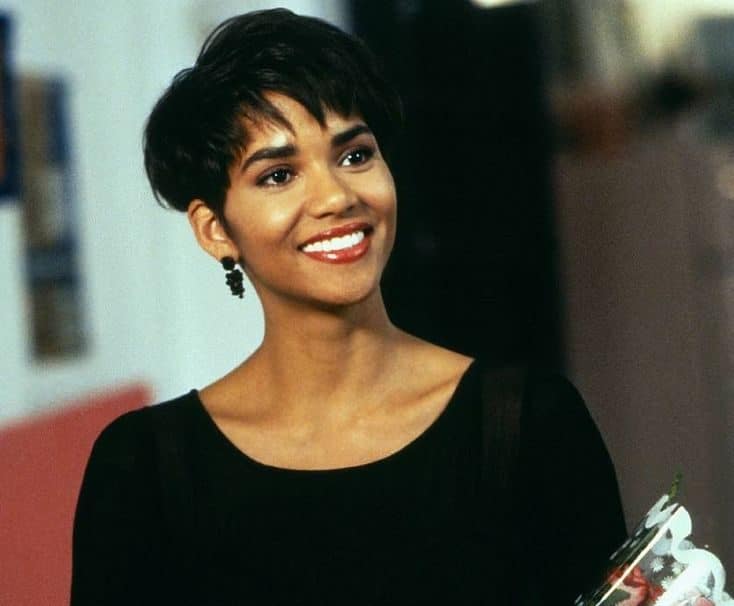 According to Halle Berry, she was interested in Indecent Proposal, and was hoping to be cast as Diana. Unfortunately for the actress, she was denied even an audition, with the studio citing that they were “afraid of adding an unnecessary racial undertone to the plot”.

Berry claimed that she was told that a black actor would not be cast in the role, regardless of talent, because the producers didn’t want the NAACP (National Association for the Advancement of Colored People) to complain about a black character having sex for money.

19. The film changed the ethnicity of the characters 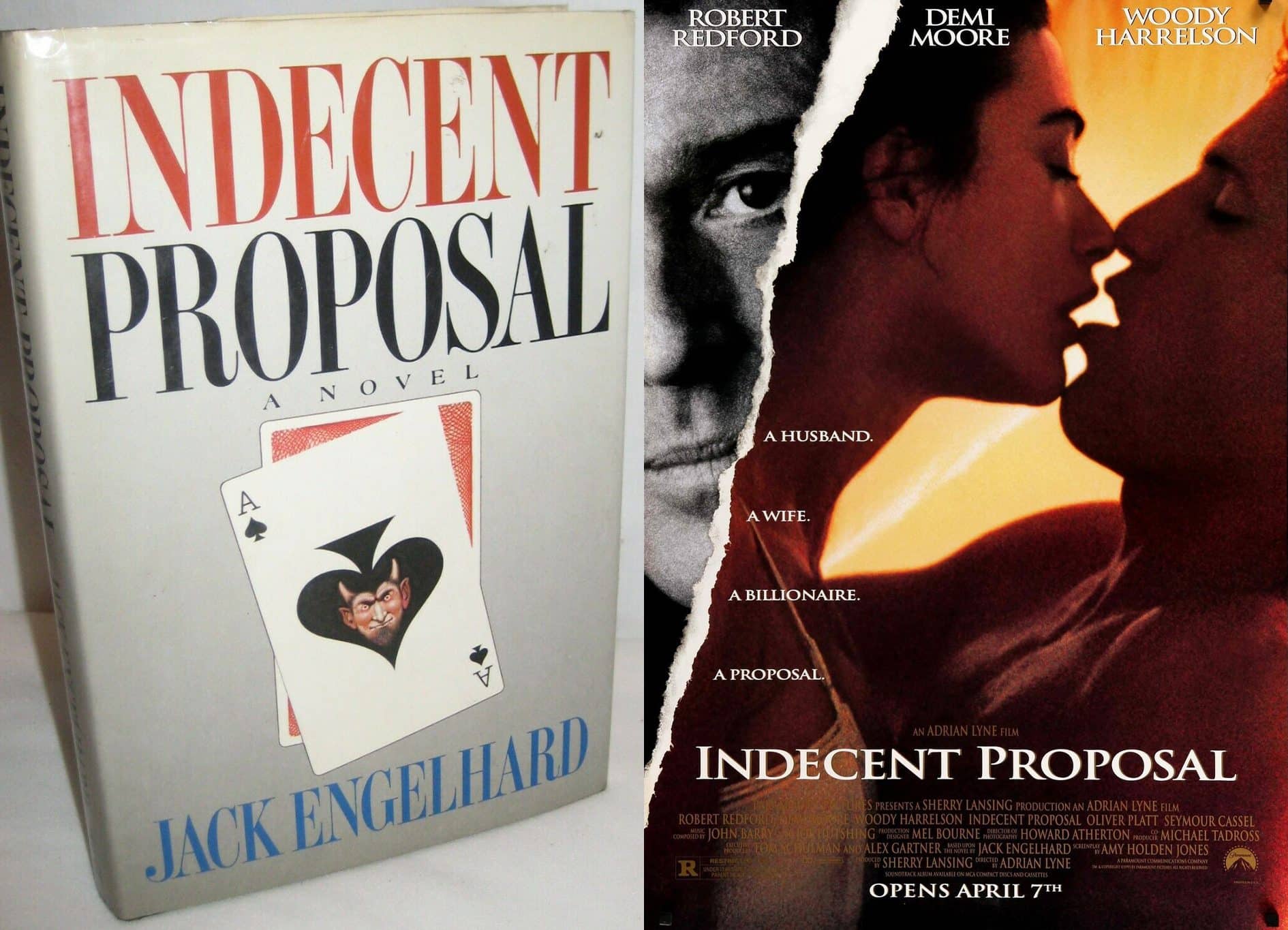 Indecent Proposal is based on the novel of the same name by author Jack Engelhard, but the screen adaptation makes some significant changes. Whilst the key plot device of a million dollars for one night with a man’s wife remains, in the book the main character was Jewish and the billionaire was Arabic.

Because of this, the novel focused heavily on relationships between Jewish and Arab people. It seems likely that studio Paramount Pictures were concerned both about causing offence and alienating a broader audience, so it was decided that all the central characters should instead be white Americans. 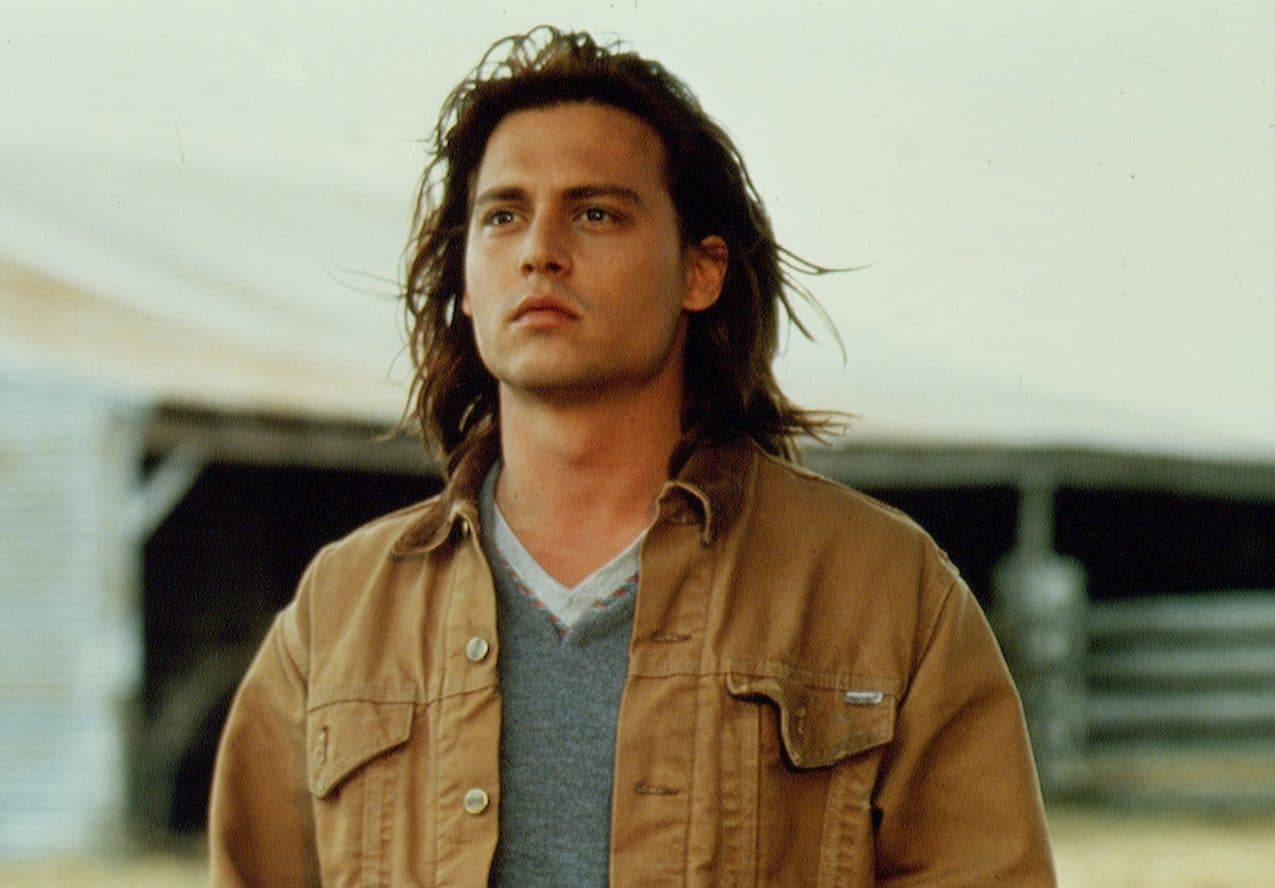 During the casting process on Indecent Proposal, Woody Harrelson was by no means the number one choice for the role of David. At one point, director Adrian Lyne and company were most interested in Johnny Depp, who was reportedly offered the role.

However, Depp (who was still breaking through in film after making his name on TV series 21 Jump Street) turned the part down. 1993 would instead see the actor star in the less mainstream-friendly drama What’s Eating Gilbert Grape, alongside a young Leonardo DiCaprio.

17.  Warren Beatty was offered the role of John Gage 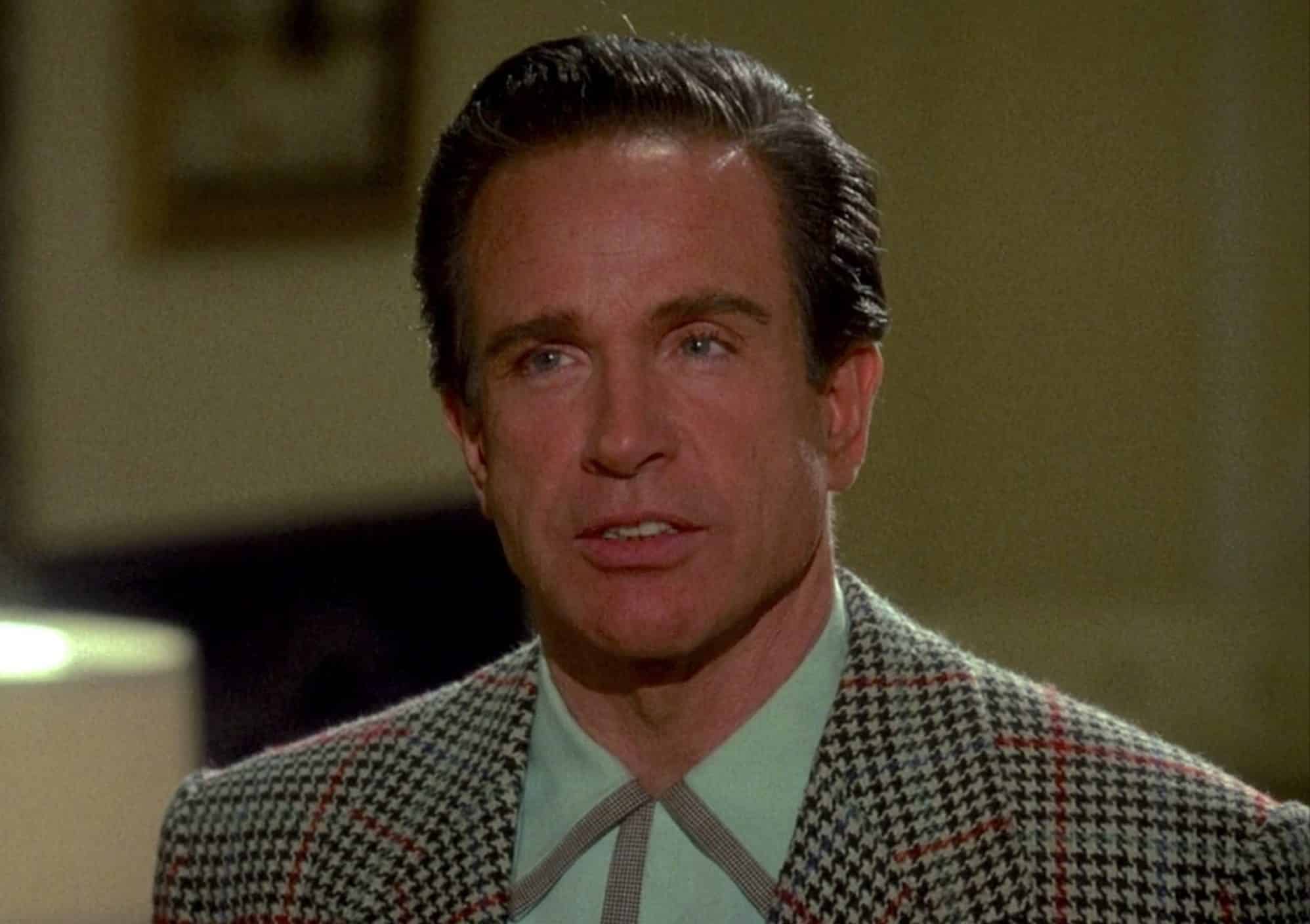 Like his co-stars, Robert Redford was not first in line for the role of John Gage. Director Adrian Lyne initially wanted Warren Beatty to play the amorous billionaire, John Gage. Beatty and Redford rose to fame around the same time in the 60s, both famed for their good looks and charisma.

However, Beatty is notoriously choosy about his projects and decided Indecent Proposal wasn’t for him. This wouldn’t be the last major hit movie Beatty missed out on, as he also backed out of appearing in Quentin Tarantino’s Kill Bill as Bill himself (the role which ultimately went to David Carradine). 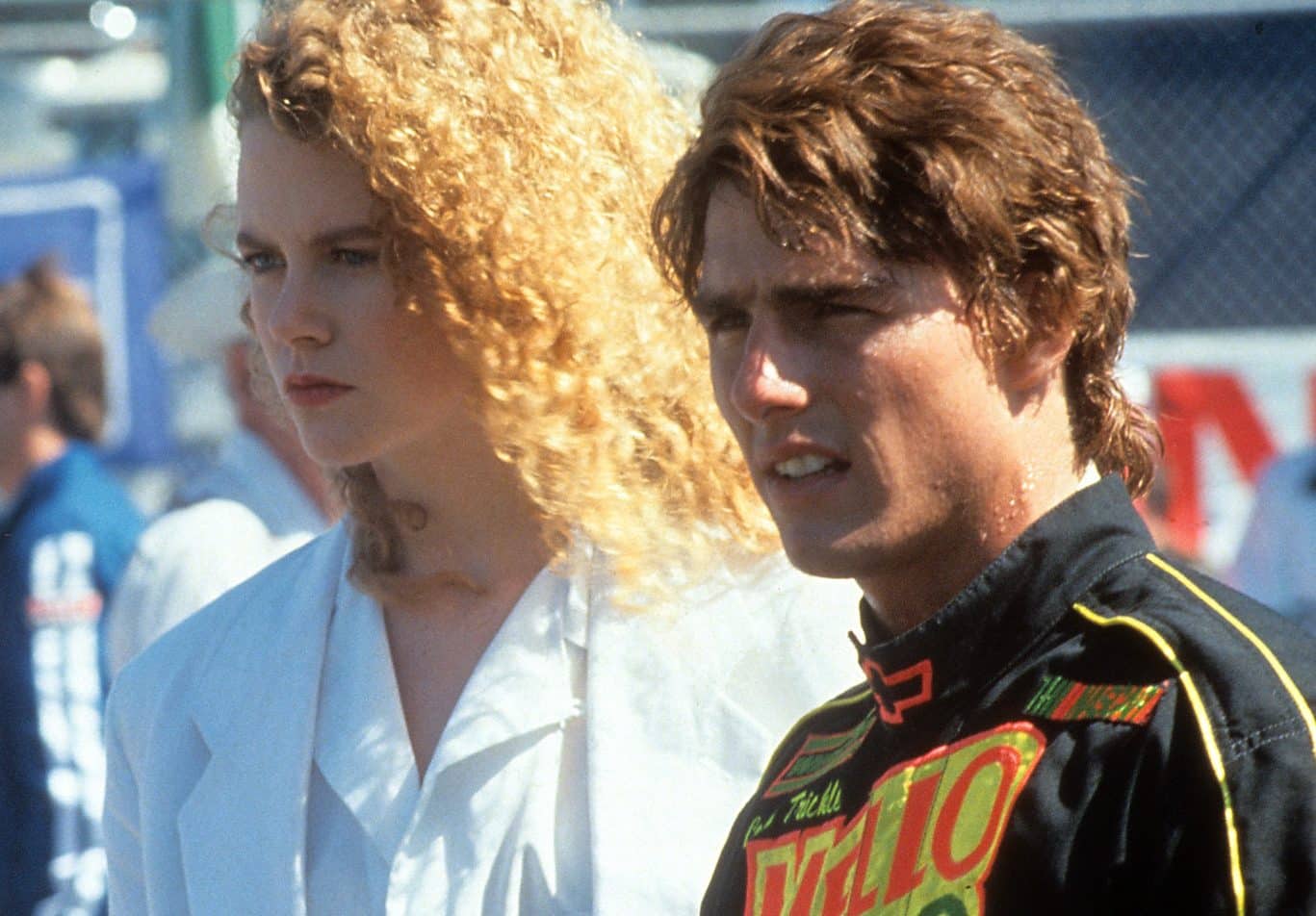 However, while director Adrian Lyne was impressed with Cruise, he was less taken with Kidman’s audition, remarking, “She was good, but it didn’t work out. Demi was better.” Cruise and Kidman would ultimately co-star a third time in 1999’s Eyes Wide Shut, after which they divorced.

15.  Woody Harrelson was sued for quitting another film for Indecent Proposal 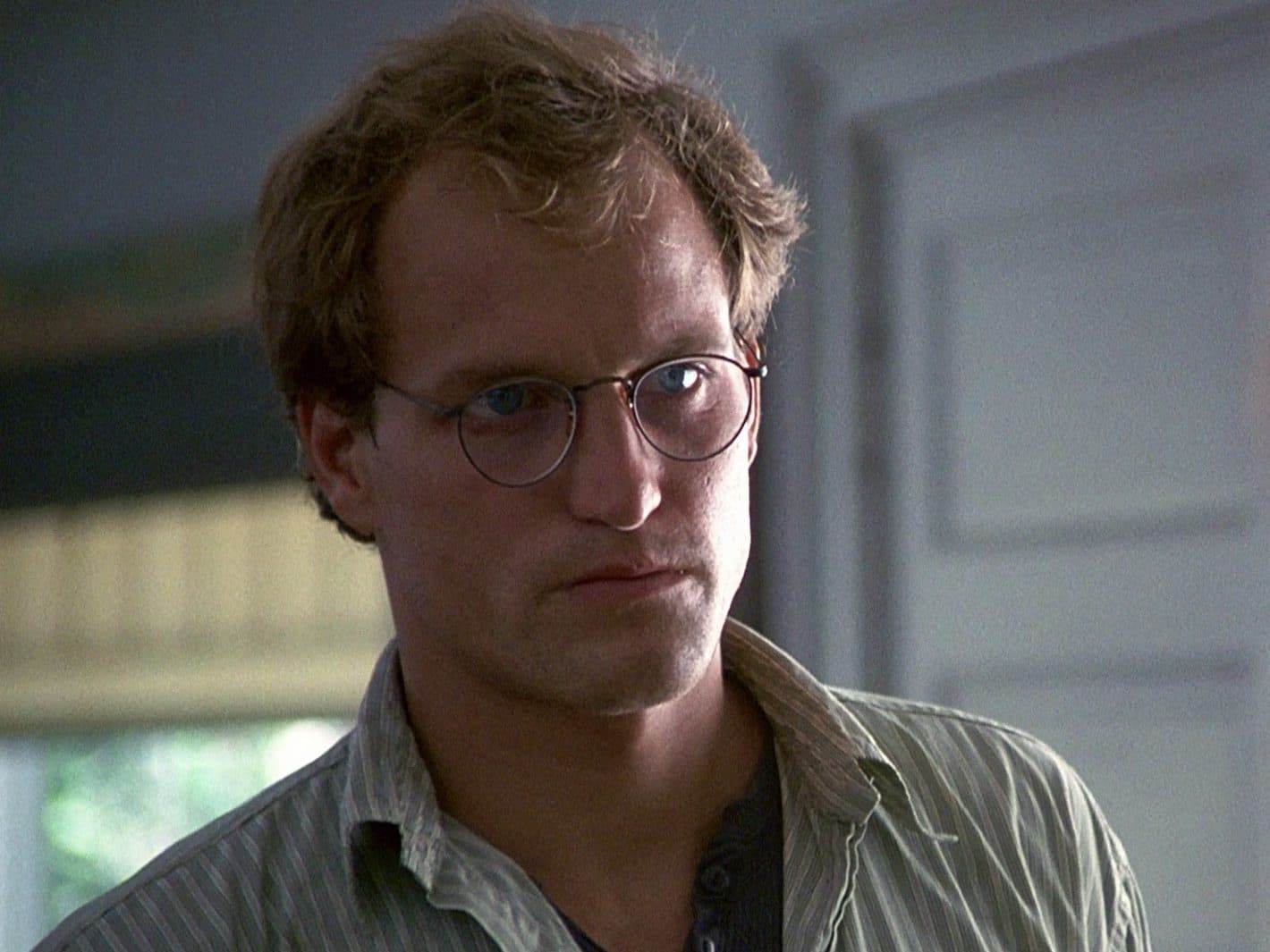 Indecent Proposal was Woody Harrelson’s first major film role after the end of his hit sitcom Cheers. However, Harrelson had also signed on to appear in another new movie, Benny & Joon (which, perhaps ironically, also starred Johnny Depp, an earlier choice for David).

Indecent Proposal’s schedule meant Harrelson couldn’t do both films, so Benny & Joon studio MGM sued him for breaking his contract. Paramount Pictures settled this with a $500,000 payout, and Aidan Quinn would instead take Harrelson’s Benny & Joon role.

14. Adrian Lyne and Demi Moore often argued during the shoot 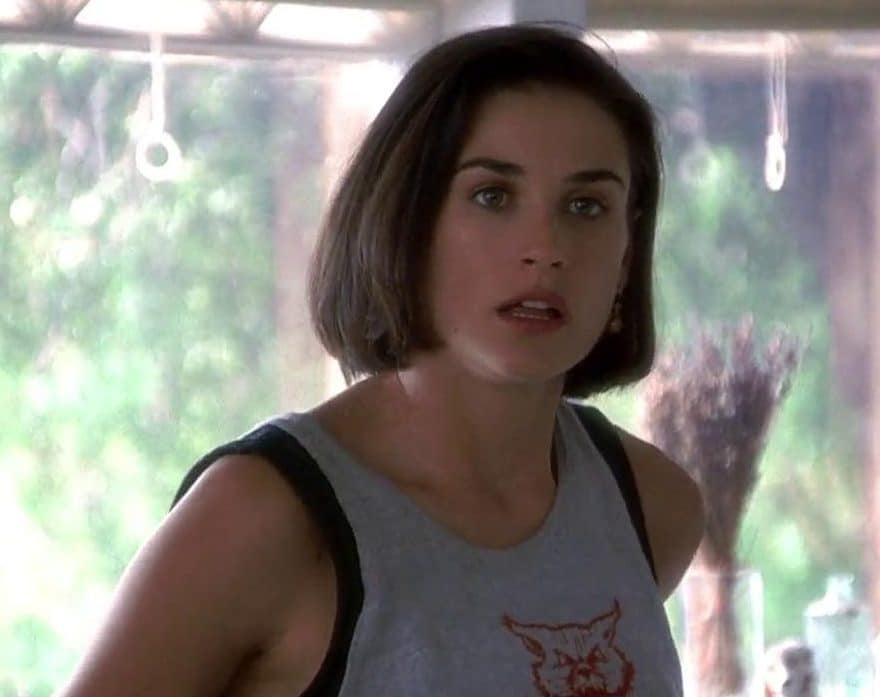 It was reported that director Adrian Lyne and Demi Moore were often arguing during the shoot, with Harrelson attempting to mediate between the two. According to cast members, Lyne wanted Moore to show more “vulnerability” in her performance, which Moore insisted she was doing already.

Lyne also demanded that Moore gain weight for the role, resulting in a bitter argument which Moore ultimately won. Whilst editing, Lyne realised Moore had actually been giving him the performance he wanted all along. Lyne subsequently managed to swallow his pride and apologise to the actress for his behaviour. 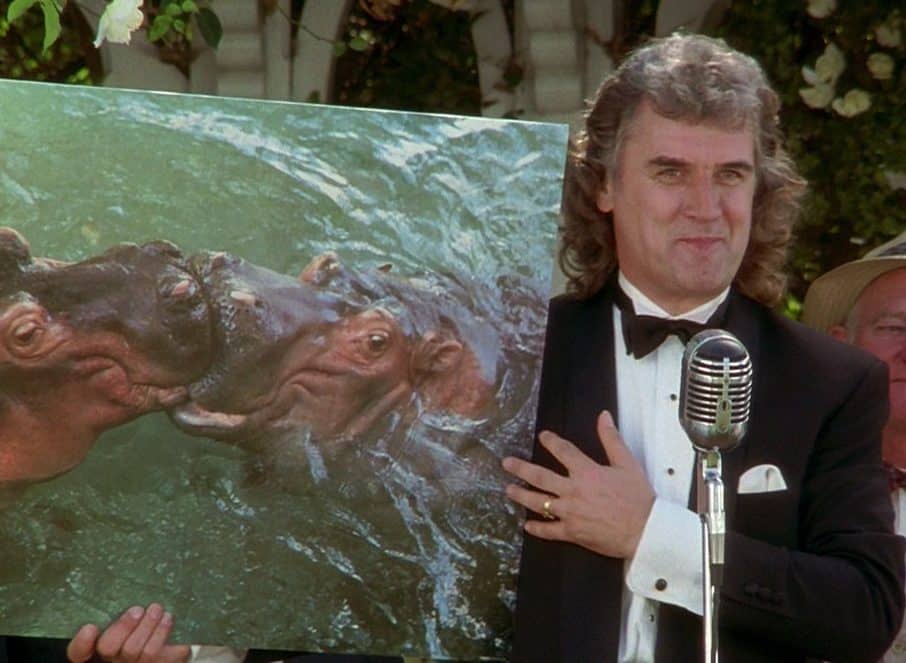 On-set reports revealed that Robert Redford kept missing his cue to leave the room during the auction scene. This was reportedly because he was too distracted listening to the comedic improvisations made by Billy Connolly, who appeared as the auctioneer.

One of the most beloved stand-up comedians of all time, Connolly came to his small role in Indecent Proposal shortly after a period as a US sitcom star. The Scottish funnyman had appeared as teacher Billy MacGregor in comedy series Head of the Class and its short-lived spin-off show Billy.

12. Woody Harrelson didn’t like filming his sex scenes with Demi Moore because of his friendship with Bruce Willis 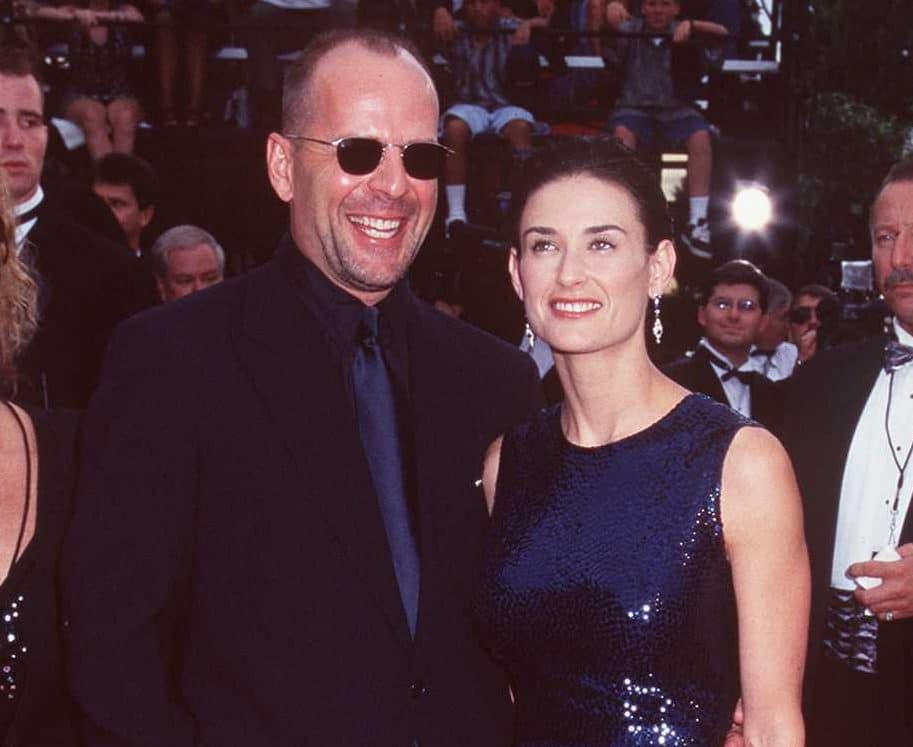 It has been reported that Woody Harrelson initially had his doubts about taking the role of David in Indecent Proposal, mainly because the role involved love scenes with Demi Moore. This was because Harrelson was friends with Moore’s then-husband Bruce Willis.

Bruce Willis and Demi Moore had tied the knot in 1987, and were one of Hollywood’s hottest couples in the 90s, although they only co-starred in two films during their marriage: 1991’s Mortal Thoughts and 1996 animated comedy Beavis and Butthead Do America. They divorced in 2000. 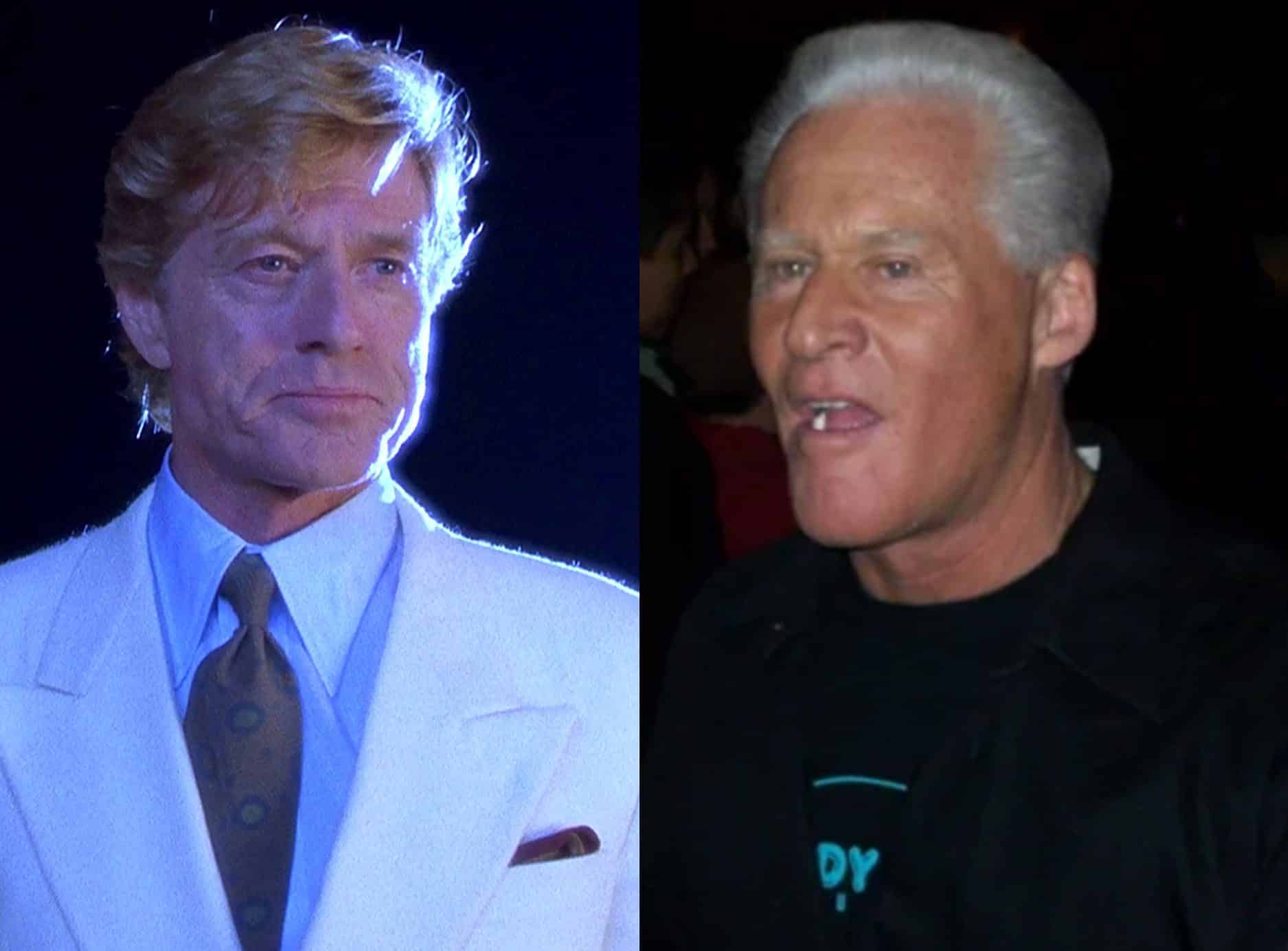 Robert Redford may be widely considered one of the most handsome leading men in film history, but it’s not his body we see in Indecent Proposal’s most intimate moments. As is commonplace in Hollywood, body doubles were used on the revealing scenes.

Redford’s body double Randy West had a great deal of experience in this field. West had enjoyed a long and successful career in the adult industry, first working as a nude art model before going on to appear in a slew of XXX-rated movies.

10. A remake is currently in development 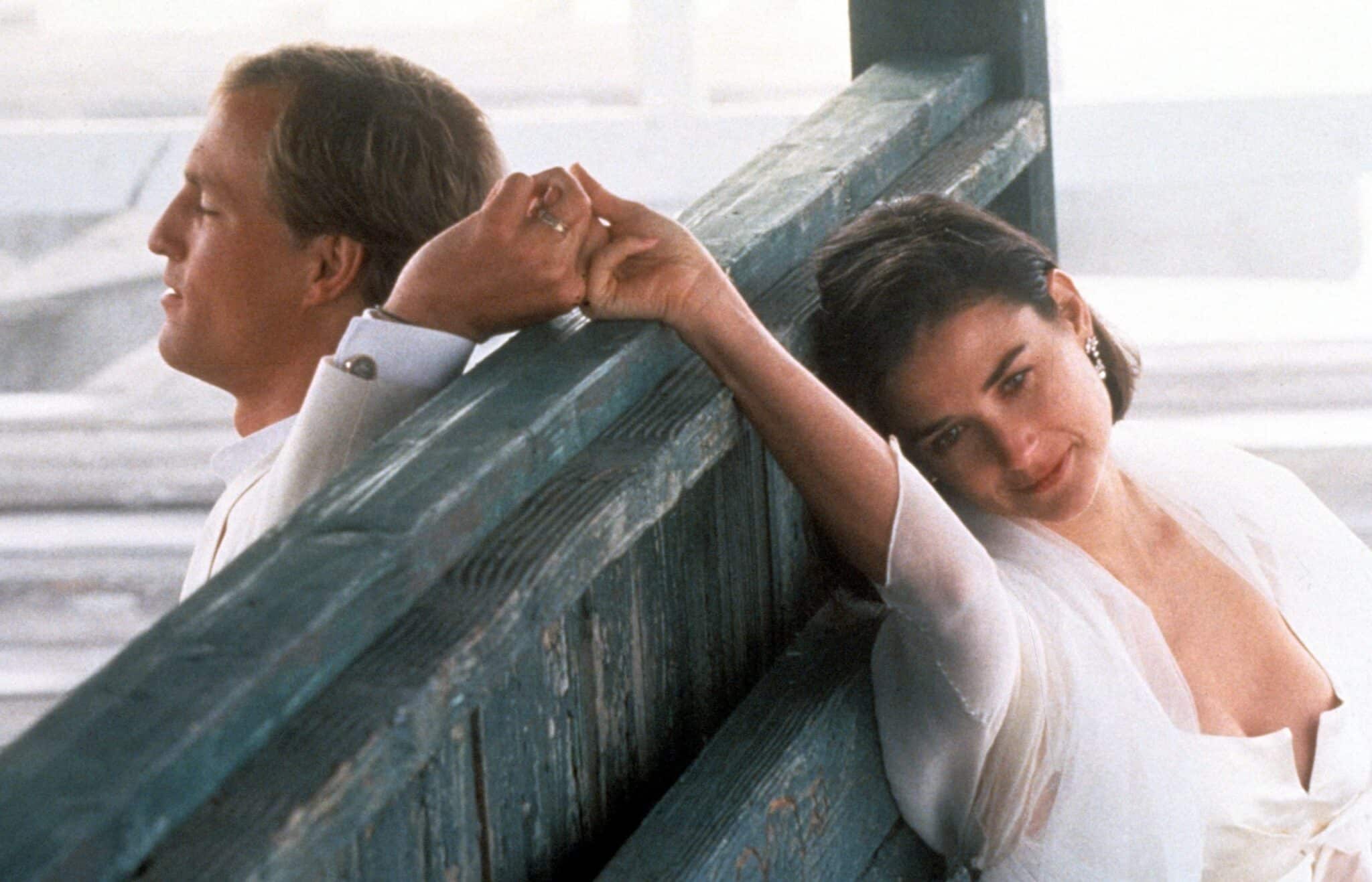 In 2018, Paramount Players announced that a remake of Indecent Proposal was in development. A screenplay for this has been written by Erin Cressida Wilson, screenwriter behind the film adaptation of crime novel The Girl on the Train, which starred Emily Blunt.

However, nothing has been announced on the remake in the years since, so it seems likely it has failed to gain momentum. Indecent Proposal has already been remade once in an unofficial capacity, in 1995 Bollywood movie Sauda.

9. Demi Moore was wary of shooting so many sex scenes 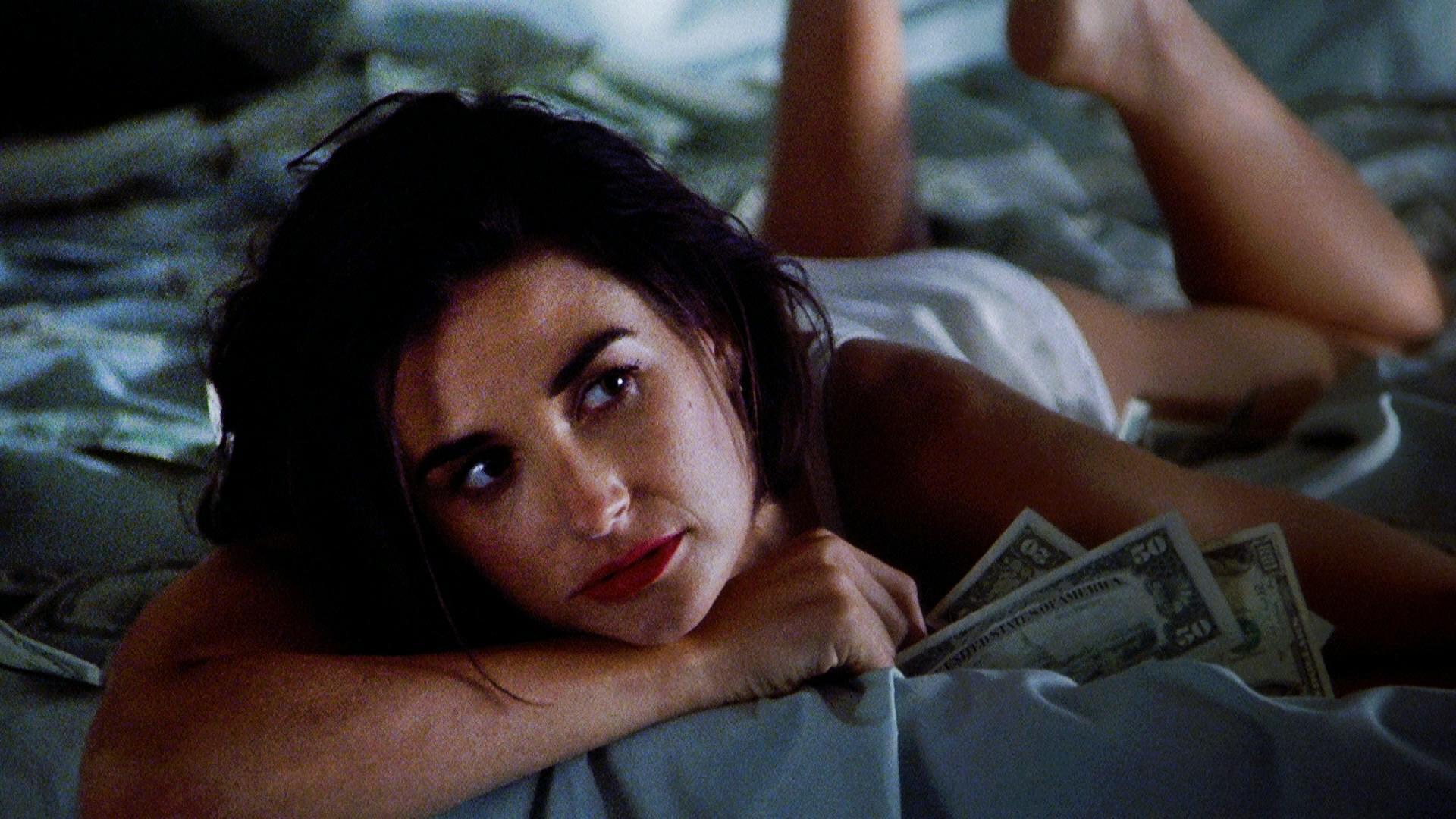 According to Moore, when she first read the script for Indecent Proposal, she felt her “heart sink”, largely due to the amount of sex scenes her role would entail. However, Moore saw behind the film’s seedy facade, she realised it was a “great story”.

According to Moore, she made a deal with Lyne, saying “he would be free to shoot the sex scenes however he wanted. But in the end I could review the footage and if there was anything I felt was too invasive or gratuitous, he would cut it”. 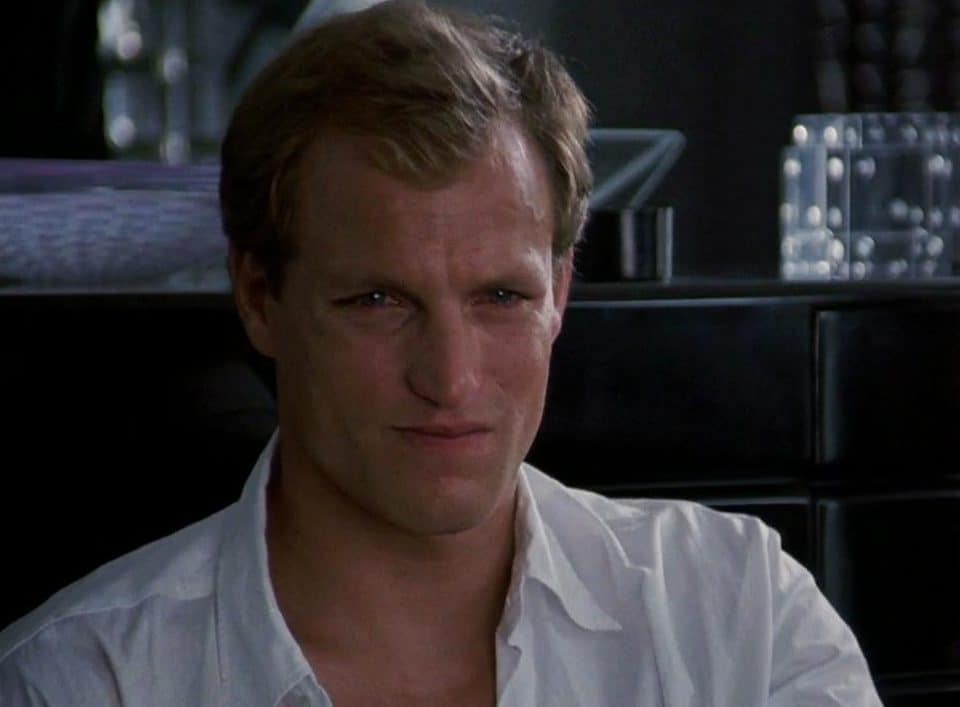 There were a vast array of actors all vying for the role of David Murphy, with some very prominent names among them. As well as the aforementioned Tom Cruise and Johnny Depp, other candidates included Val Kilmer, Charlie Sheen and John Cusack, all of whom declined.

When Woody Harrelson was suggested as a potential David, director Adrian Lyne initially disliked the idea. However, after seeing the actor’s breakthrough performance in White Men Can’t Jump, Lyne had a change of heart and offered Harrelson the part.

7. Demi Moore actually cried during the “girl that got away” scene 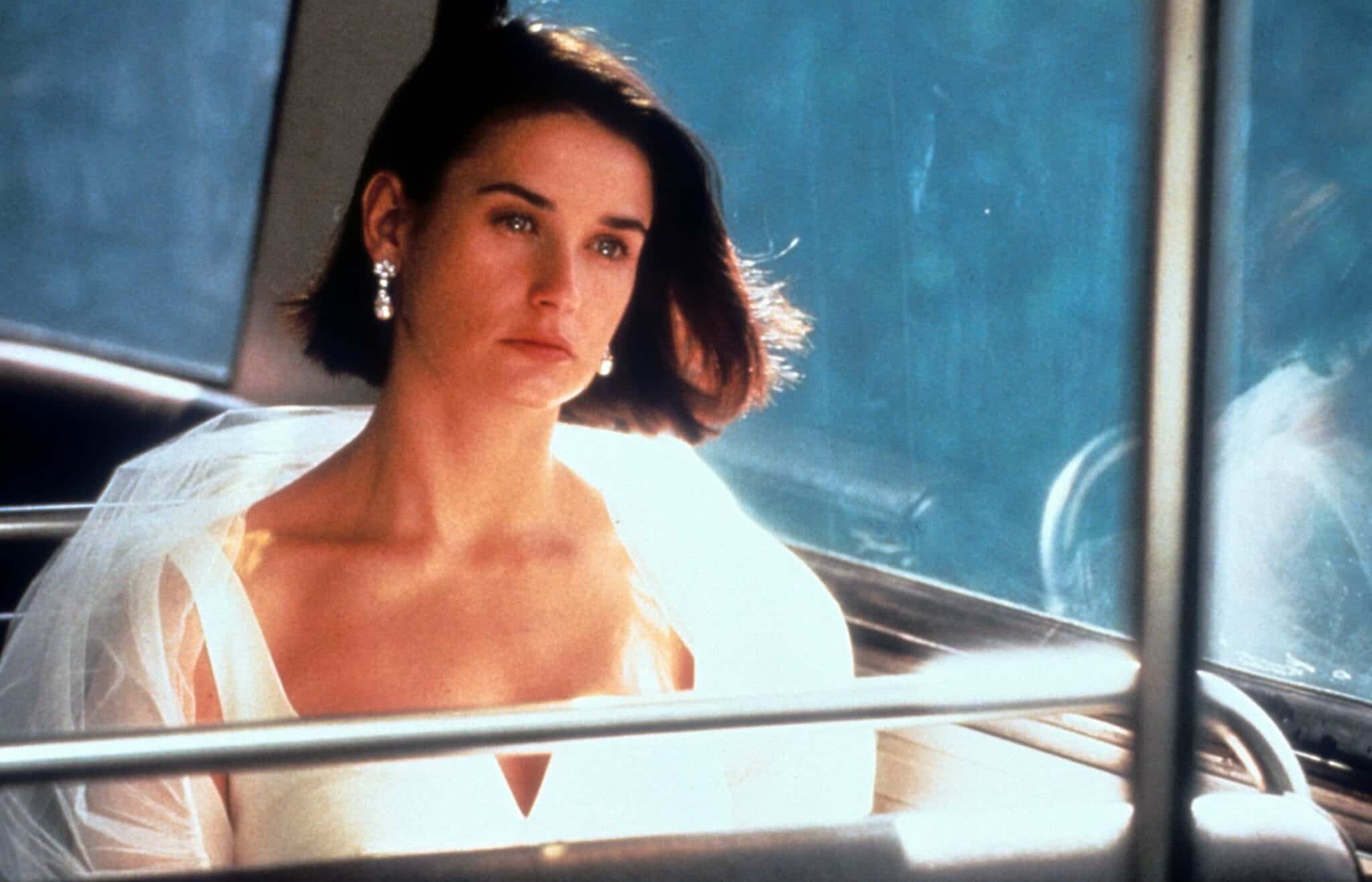 According to Moore, the tears you can see during the “girl that got away” scene are not just the result of extraordinary acting skills. Moore actually cried during this scene, which consisted of Gage describing a past chance meeting with a beautiful girl.

This was largely due to the fact that Moore had not been given a full script, and was therefore unaware of Redford’s lines. Instead, she was told “just to listen”, which helped aid her genuine reaction. 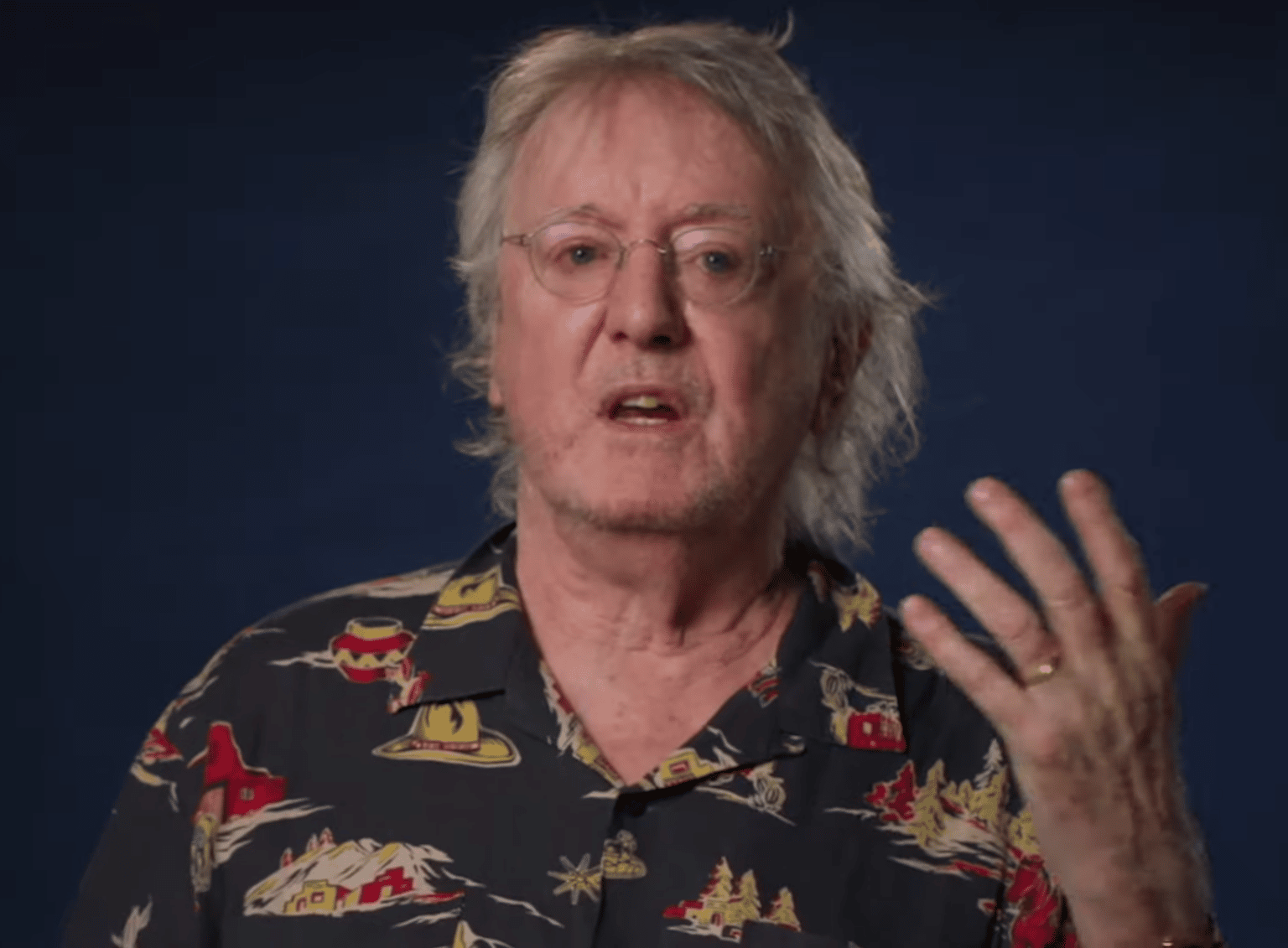 Lyne brought back a lot of his signature flourishes for Indecent Proposal, including using water for dramatic effect during an argument scene between David and Diana. Lyne also tends to film characters with a light source coming in from the side at eye level to create a silhouette effect. 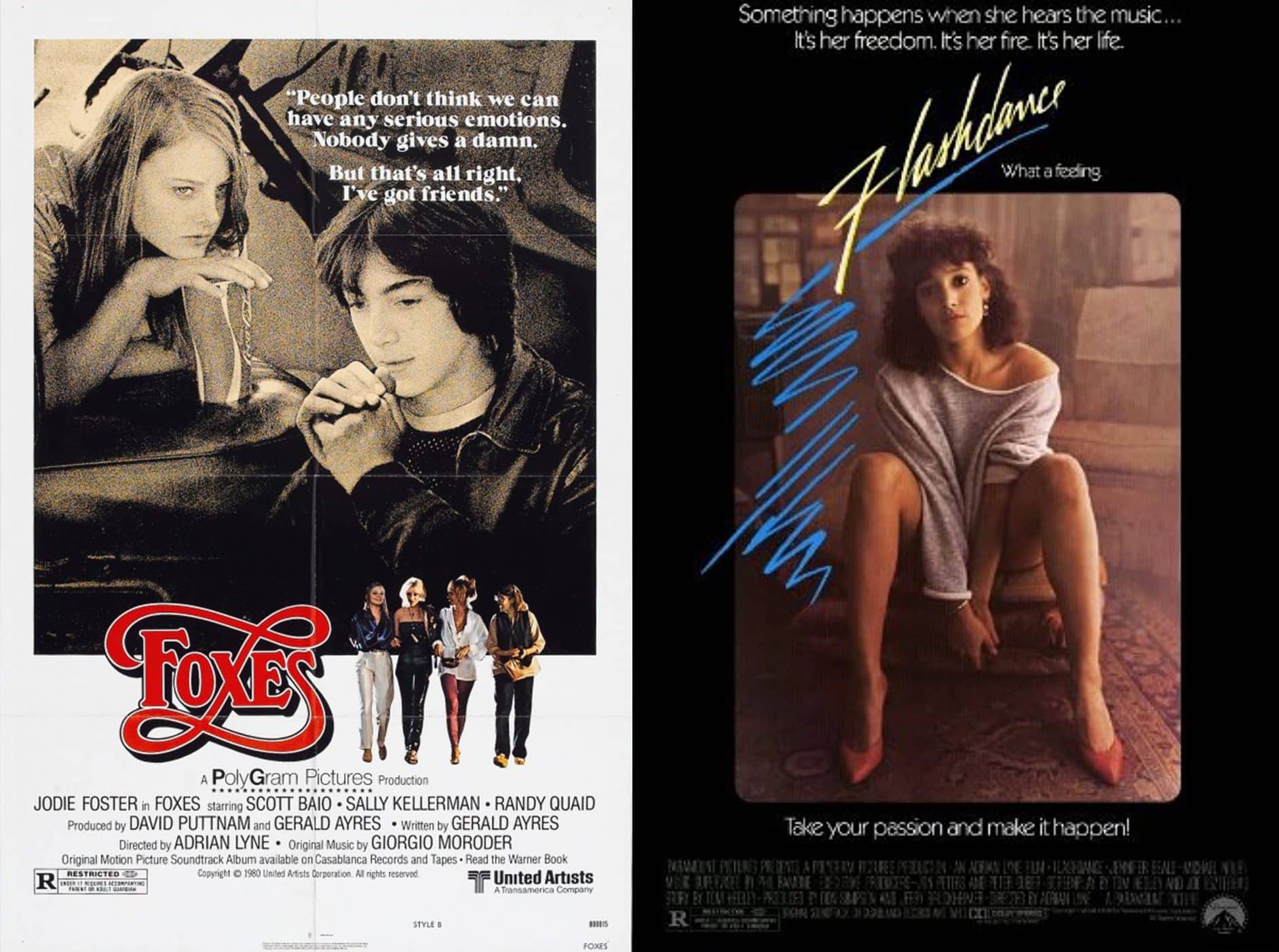 Moore had been vying to work with esteemed director Lyne for several years, but unfortunately to no avail. She had auditioned for the lead roles in two of his movies, 1980’s Foxes and 1983’s Flashdance, but failed to land either movie.

The role Moore missed out on in Foxes went to Jodie Foster; the film was well-reviewed but under-performed commercially. By contrast, Flashdance (in which the lead was taken by Jennifer Beals) didn’t impress critics but proved to be one of the biggest box office hits of 1983.

4. It was nominated for seven Razzie Awards 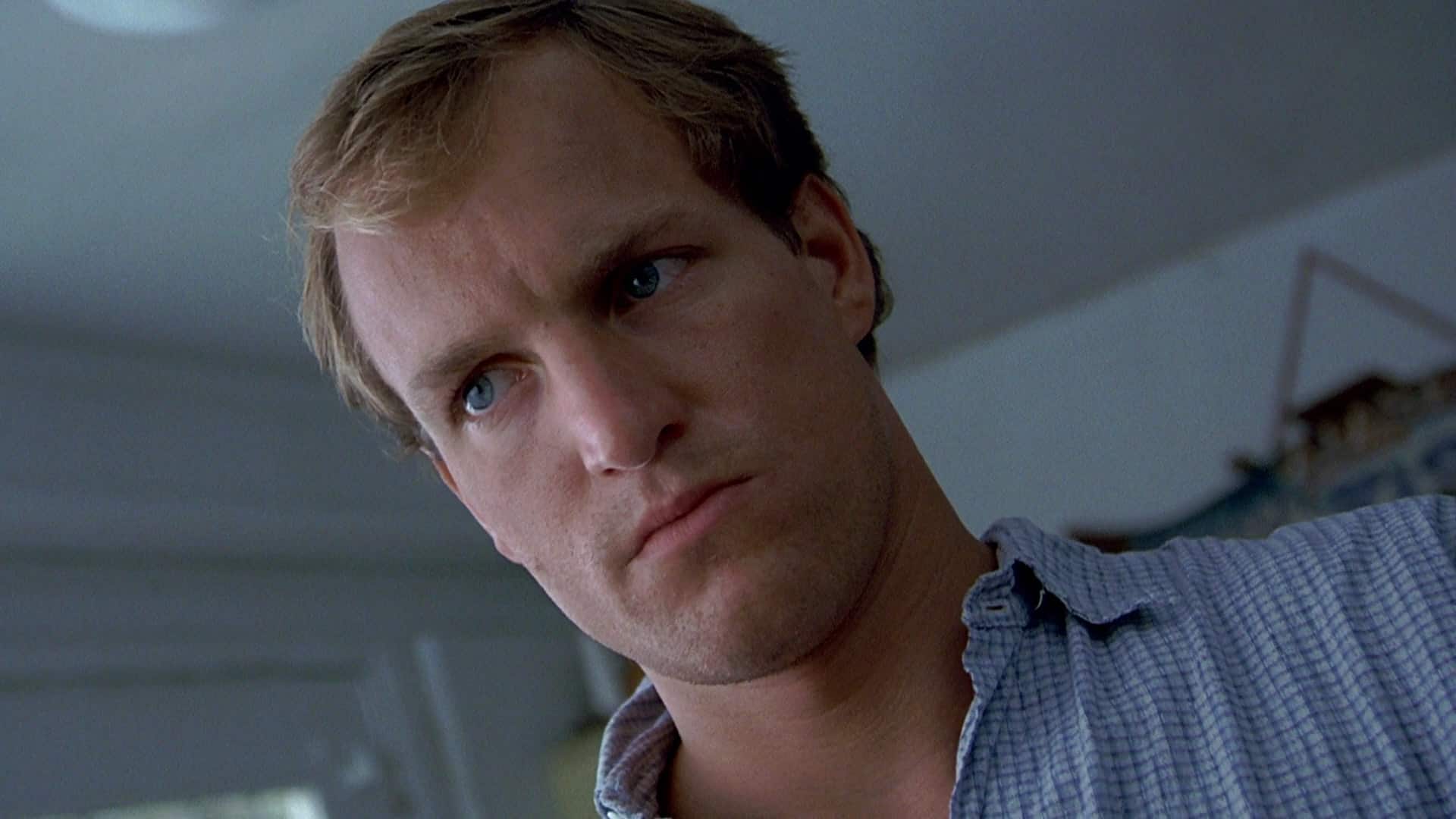 Awards nominations are usually a good thing, but not when it comes to the Golden Raspberry Awards. Indecent Proposal was nominated for seven of the dreaded Razzies, much to the dismay of the cast and crew.

3. The screenwriter wanted Jason Alexander as Diana and David’s lawyer 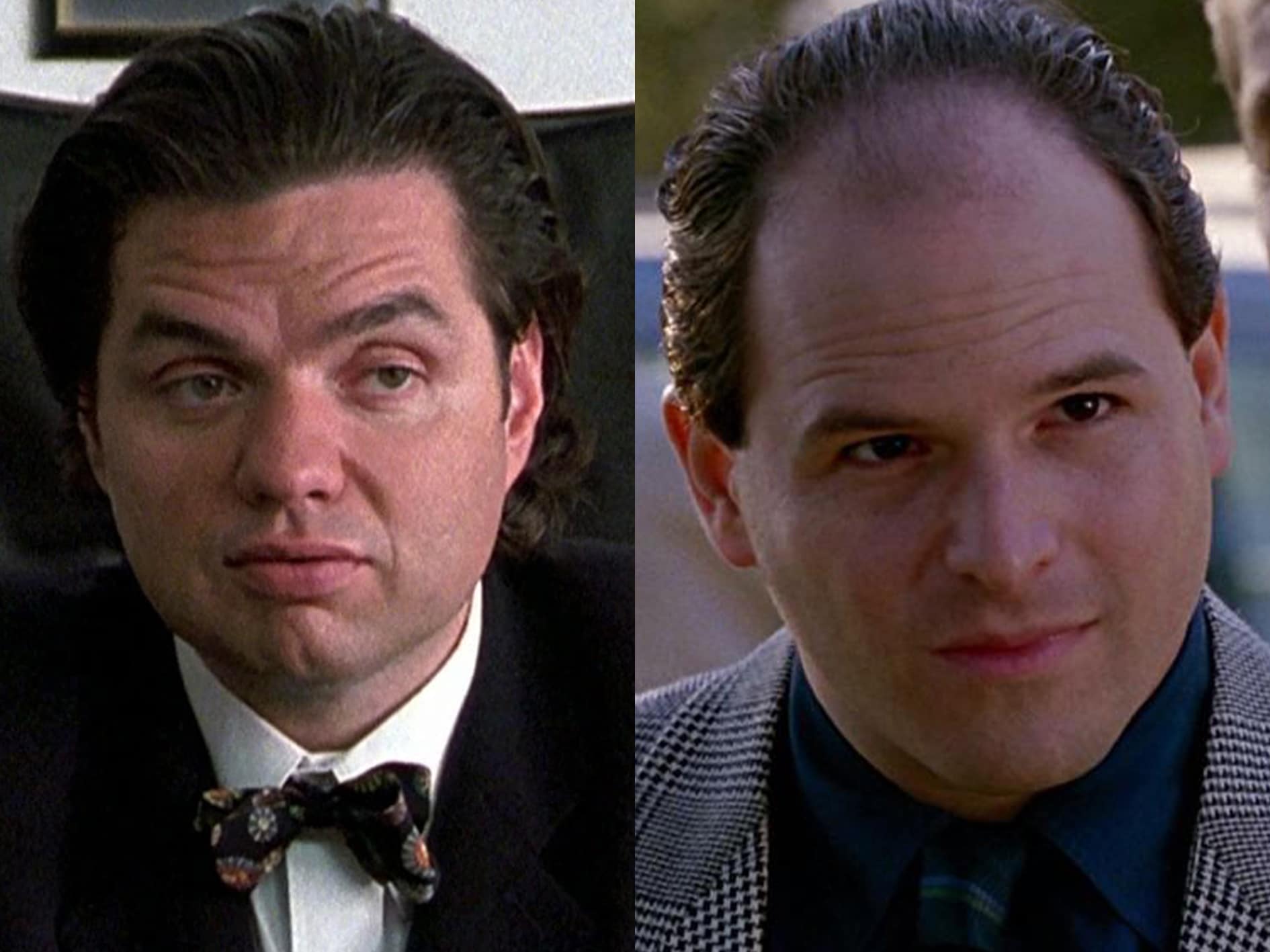 According to screenwriter Amy Holden Jones, she initially wanted the role of the lawyer to go to Jason Alexander. She put forward the suggestion, which was swiftly rebuffed by the director, Lyne. Oliver Platt was cast in the role instead, although the character was only relatively minor.

In the years since, Alexander has become well known for his role as George Constanza in popular sitcom Seinfeld. At the time, his most prominent film role was that of another lawyer in Pretty Woman.

2. It was a commercial success despite being panned by critics 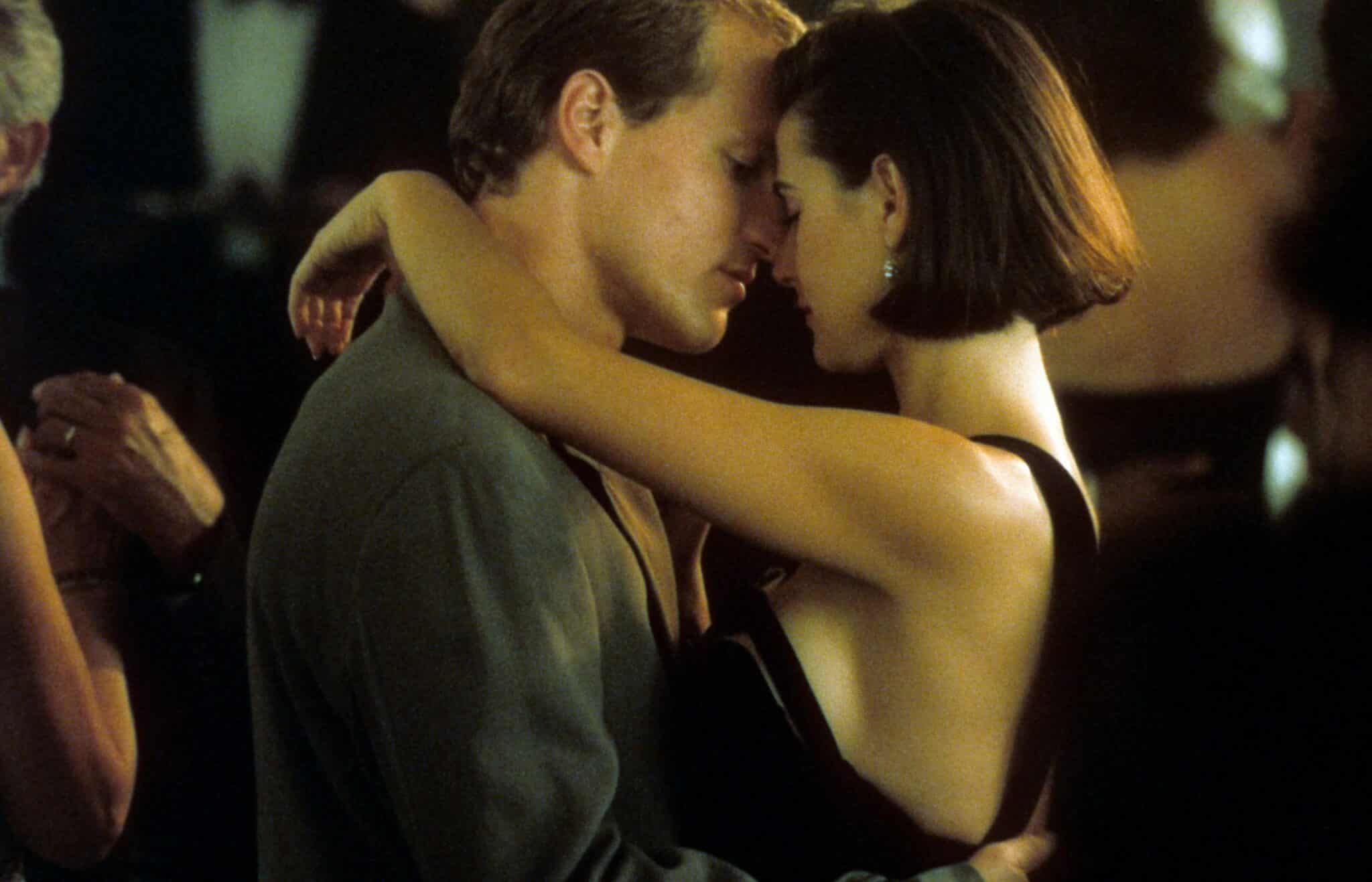 Indecent Proposal was panned by most of the critics that reviewed it, with Rotten Tomatoes today still rating it at just 34%. The site’s consensus read that the film “has difficulty keeping it up beyond its initial titillating premise.”

Some critics were not quite so negative in their appraisal, with Roger Ebert giving it a ‘thumbs up” and writing a positive review. Either way, Indecent Proposal was a big box office success, making over $250 million worldwide from a budget of just $40 million. 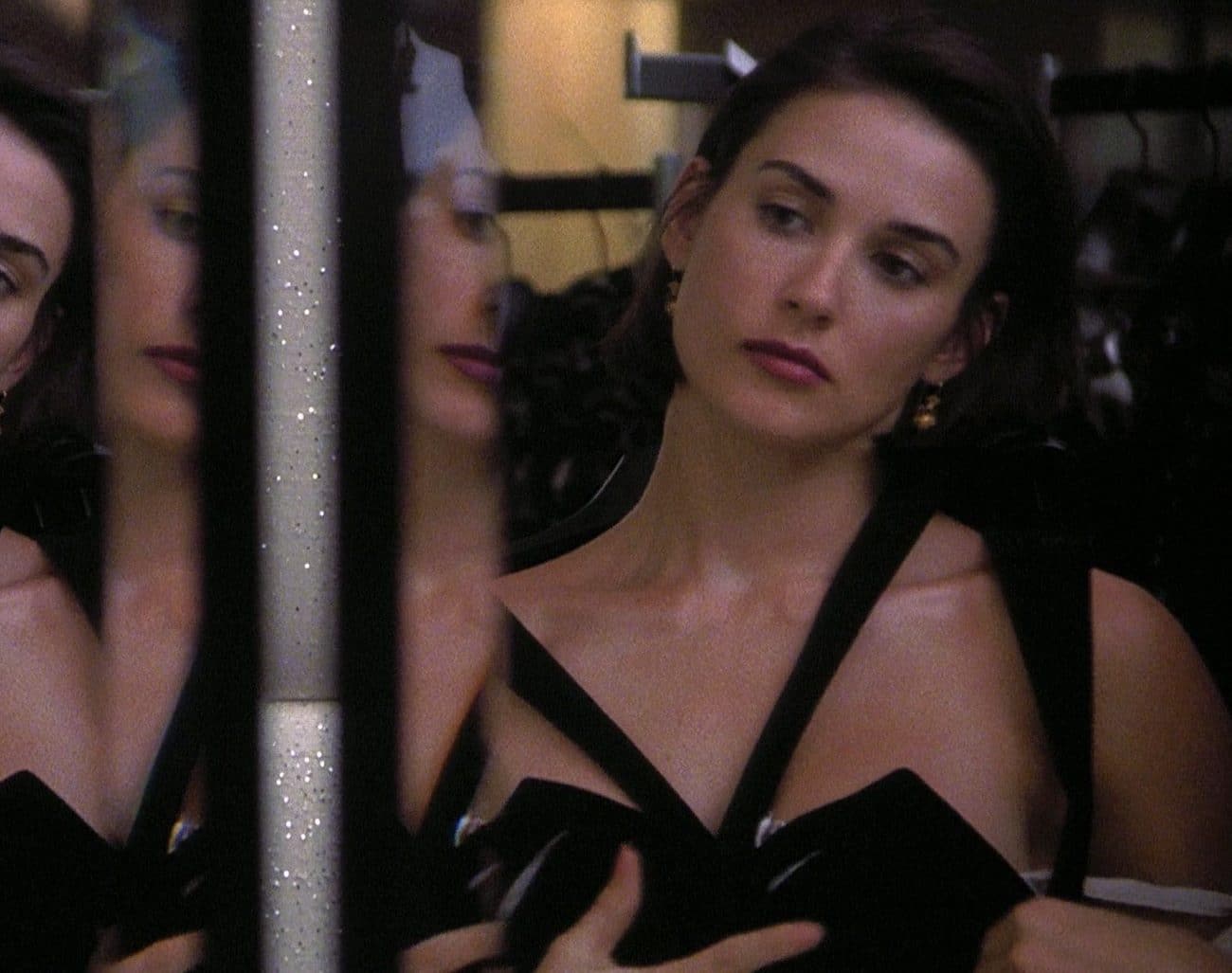 The core premise of Indecent Proposal – one man offering another man $1 million for a night with his wife – was always going to be provocative. The filmmakers probably weren’t surprised, then, that on release they faced a significant backlash from feminists.

As The Los Angeles Times reported at the time, the film was declared an “insult” to women by USC English professor Tania Modleski, feminist author Betty Friedan said it made her “sick,” and Thelma and Louise screenwriter Callie Khouri complained the film conditions “women to hate themselves and not value anything other than their sexual selves.”