You’d be forgiven for thinking that Blockbuster Video was a thing of the past. Since the invention of Netflix and viewer habits moving away from DVDs, it was only a matter of time before the video hiring store close its doors for good.

It’s not all doom and gloom however, for one lone Blockbuster still remains open…the last ever Blockbuster. One that has stood the test of time. 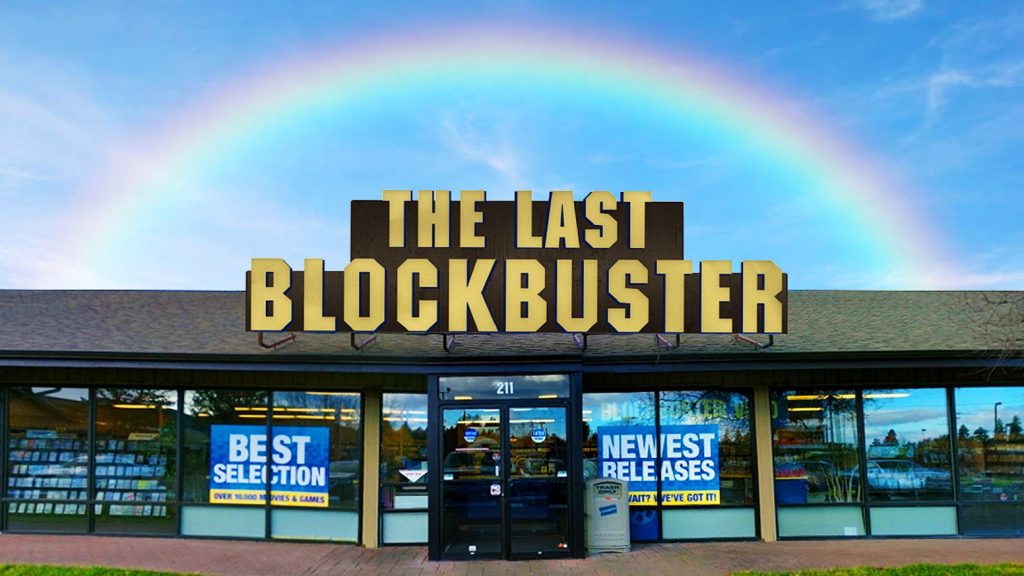 The last ever Blockbuster likes to tweet about how sad and lonely they are, and what it is like being the last one.

Get ready for a treat as you read some of the funniest tweets from the account. They provide an insight into the goings on of the last ever Blockbuster.

1. Only opens if customers wants…

The owners of the last Blockbusters would like people to tell them if they’re coming in.

This gives them a chance to run over and actually open the store.

It can be a lonely existence being the last ever Blockbuster.

It’s not surprising that they get excited when they think they have visitors.

3. A way of enticing people in 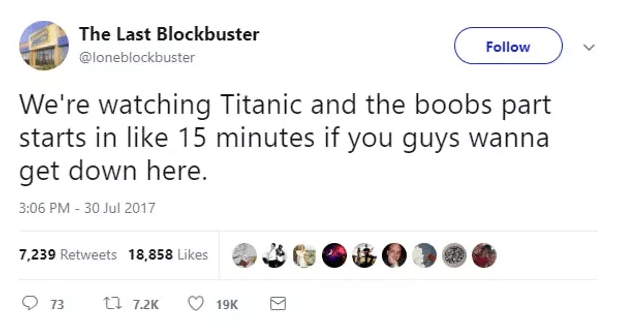 Titanic is arguably one of the best films of all time.

Here, the store is using boobage to try and lure people in.

They might be the last Blockbusters, but sometimes it isn’t nice being reminded of that. 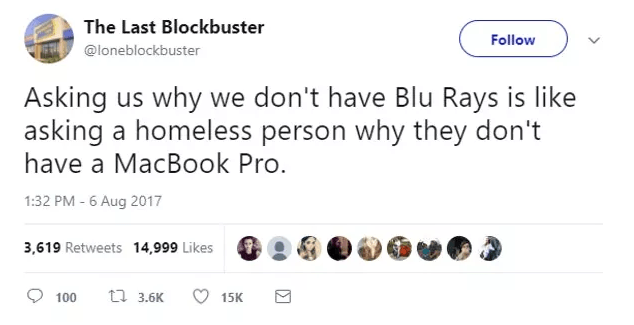 The last Blockbusters doesn’t appreciate being asked for Blu Rays.

They compare it to asking a homeless person why they don’t have a MacBook Pro.

Especially when those loiterers stand and vape outside.

Here, the last Blockbusters is joking that they own a large portion of Netflix, a rival company.

Or at least, they probably would had their electricity not been cut off.

As such, you should not try fitting your VCR through a slot not designed for that purpose. Certainly don’t kick it through.

9. Feeling sorry for themselves 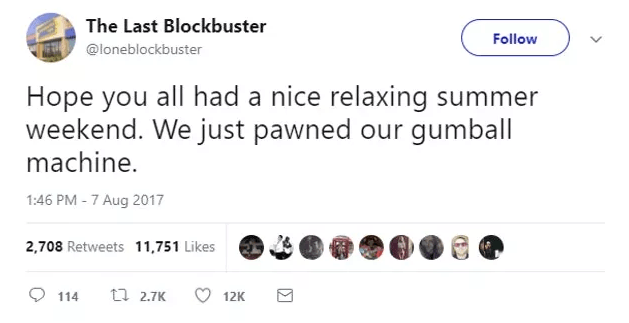 In this tweet, the last Blockbuster is feeling a little sorry for themselves.

Whilst they wish that everyone else has had a pleasant weekend, they had to get rid of their gumball machine. Sad times. 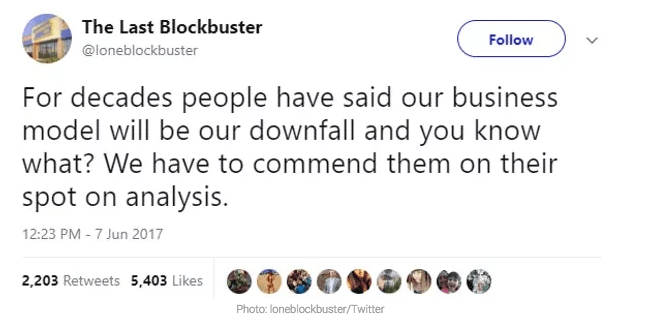 The last Blockbuster can accept hard truths when it hits them in the face.

People said that it wouldn’t work, and they accept that they were right.

11. A short but sweet job advertisement 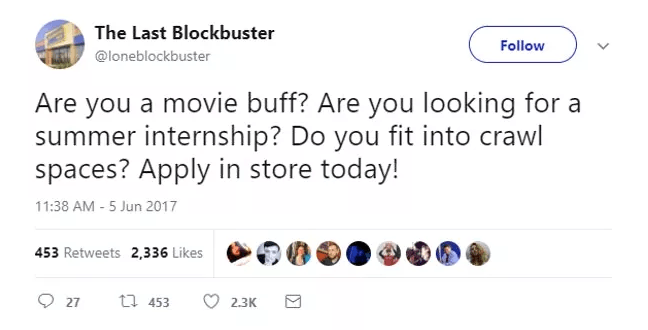 If you wanted to work for the last Blockbuster, you need to be a movie buff.

You also need to be able to fit into crawl spaces, which is slightly worrying.

12. Ragging on the eclipse 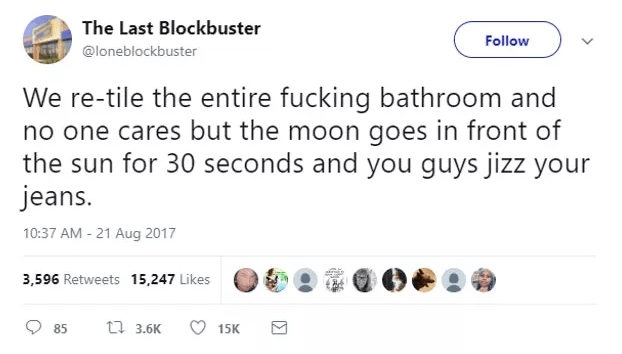 These guys think that people don’t have their priorities right.

Retiling the store bathroom is much more important than an eclipse right?

Have you ever upset your sister…perhaps by throwing a rock at her head or something similar?

Well you can make amends by getting them a Blockbuster gift certificate. 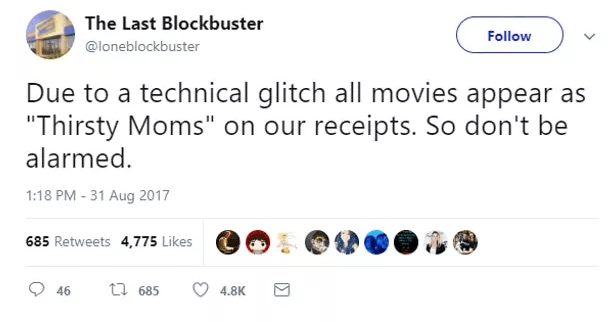 Unfortunately the store had a bit of a technical glitch when it game to the receipts. 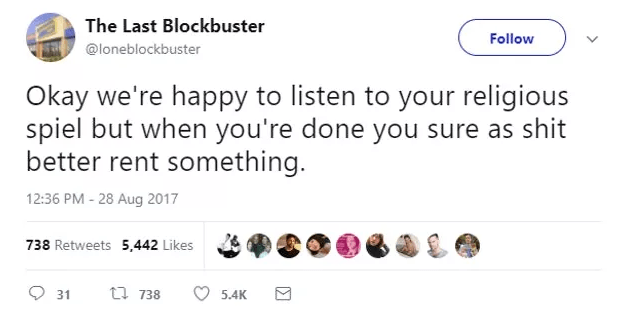 The guys at the last Blockbusters don’t mind if you chat to them about your religion.

They would just appreciate it if you rented something afterward, to make listening worth it. 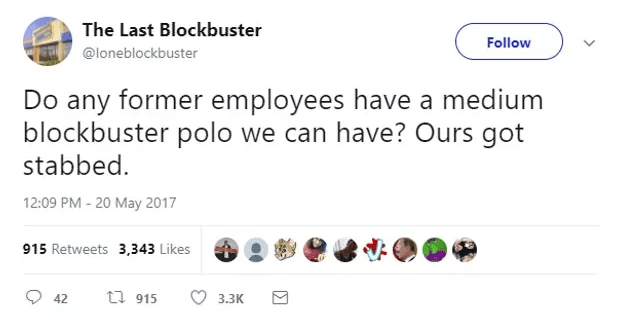 Being the last one in existence, it might be difficult to source new uniform for the staff.

This was apparently the case when one of them were stabbed. 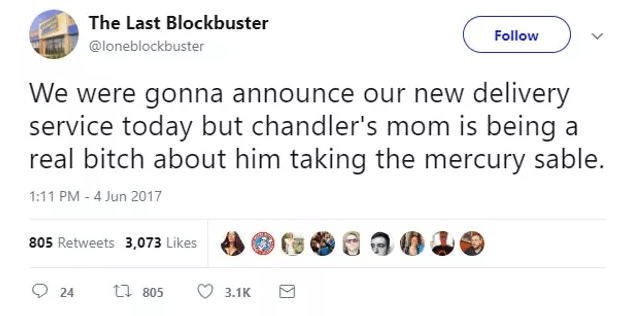 The delivery service that they were going to offer, the can no longer do.

This is because Chandler’s mom doesn’t want him taking the mercury sable.

18. Can anyone watch the store? 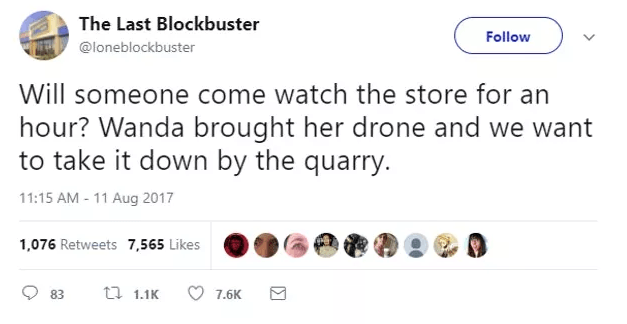 It’s a bit of a struggle trying to get a helping hand if you need to do something.

This tweet is asking if anyone can look after the store whilst they go and fly a drone.

19. When the manager tries to play a prank… 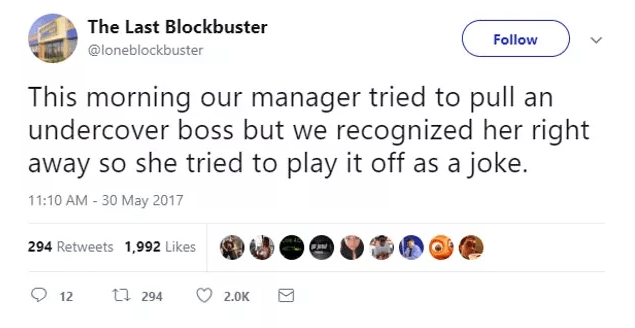 Working in the last and only Blockbusters, it must be pretty easy to recognise who you work with.

This boss’s attempt at ‘undercover boss,’ got found out fairly quickly. 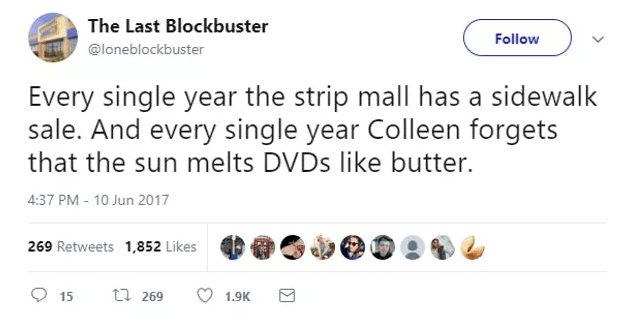 It seems like Colleen didn’t learn the first time when she left the DVDs out on the sidewalk to melt.

Hopefully Colleen will remember next time!

We hope you have enjoyed these funny tweets from the last Blockbuster store. Be sure to share with friends and family if you did!