The Top 10 Worst/Best Men’s Hairstyles of the 80s

“A woman who cuts her hair is about to change her life,” Coco Chanel once said. But the same can absolutely be said for the men of the 80s, as locks grew longer, blow-dries blossomed and quiffs were quite the rage.

It wasn’t as simple as picking the latest look, however. While Brother Beyond’s Nathan blow-dried his fringe into the largest quiff this side of the 1950s, imitators often found the results pretty nightmarish. In other words, one man’s meat was another man’s poison when it came to the hairstyles of this decade.

So we’re leaving no stone unturned in our countdown of what we believe to be simultaneously the best and worst hairstyles of the 80s. We’re taking a look across the eclectic worlds of pop music, TV, film, cartoons, gaming and every other conceivable genre in-between, as we compile this (possibly) definitive compendium of hair-riffic greats on the silver, small and pixilated screens. 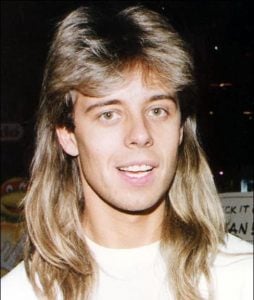 Pat Sharp wasn’t alone in rocking a mullet (think Jason Donovan), but his was arguably the benchmark by which all rivals judged theirs. DJ Sharp’s unique take on what passed as hair coverage certainly polarised opinion back in the day.

And even to this day, the mullet remains the ultimate style that we love to hate. 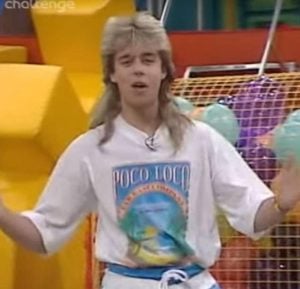 But never once did this deter the children’s ITV ‘Fun House’ presenter in his heroic quest to out-embarrass himself with aplomb. You have no choice other than to salute this level of mullet majesty, especially when competition in this field was so fierce.

Eventually, he chopped the mullet off at the request of his partner Monica, who is now his wife of 34 years. Reflecting to The Guardian on how it felt to lose the mullet, he is said it was “Cold! But it was time to grow up. It’s a cool thing to look back on but I couldn’t have it now. I’d look like Joe Exotic.” 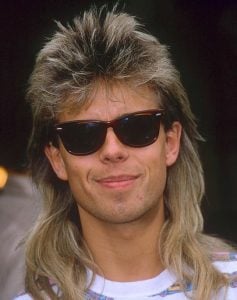 DJ Sharp’s confidence seemed key to his unusual look – and thanks to his full head of hair, Pat Sharp’s crowning glory was in fact the real deal. Adorning this friendly face, Sharp’s mullet completely deserves to be included in any we-love-to-hate-it hairstyle list. 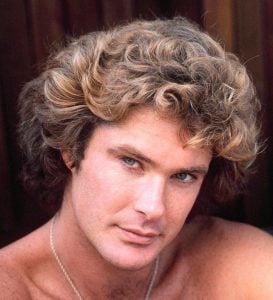 A perm to end all perms, David Hasselhoff’s hair took the 80s by storm. Around this decade, you would’ve spotted the Hoff in Semi-Tough, The Love Boat, Knight Rider and The Young and The Restless. 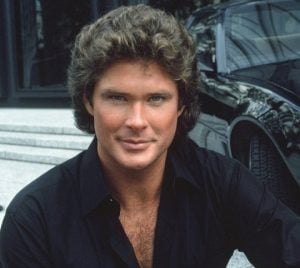 Fortunately for Dave, his chiselled looks allowed him to sport pretty much any haircut – yet it’s impossible to believe that without his strong masculine features he’d have been given such an easy ride. 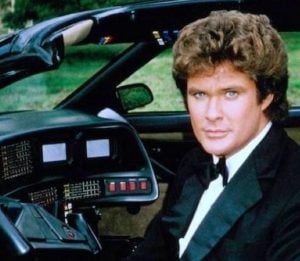 The love it or loathe it perm seemed to have miraculously disappeared without trace a decade on, when ‘The Hoff’ reinvented himself as a Malibu beach lifeguard who had spent his time away from the limelight perfecting slo-motion running through the waves.

His hair, however, remains the stuff of legend. The star owns a 12-foot replica of himself (a prop from The SpongeBob Movie), which lives in his Los Angeles home. As The Hoff revealed in a 2012 interview with The Guardian, this replica’s locks were created with yak hair – “Somewhere, there is a very bald yak,” he quipped. 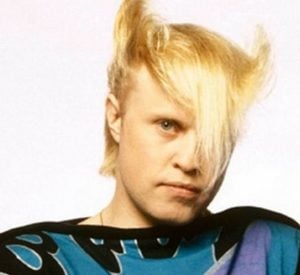 The Liverpudlian synth-pop band A Flock of Seagulls didn’t just sweep the international charts – they also brought about a particularly windswept look. This unusual style helped to single out followers of the band as a little bit different. Which was quite the achievement in its own right, given that almost EVERYONE in the 1980s rocked an acquired taste in the coiffure department. 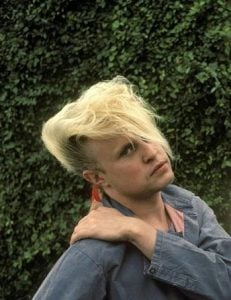 Beyond any form of logical description (other than ‘stupendous’), the forerunner to what we recognise today as the ‘Donald Trump’, the ‘flock’ was, essentially, a back-combed look. It often tapered to a sharp point somewhere near the wearer’s nose. 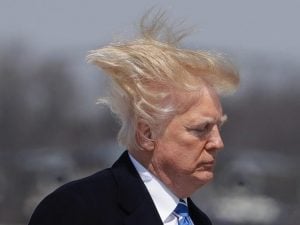 With most of the hair darkened underneath, the curled tip was bleached blonde for maximum impact. 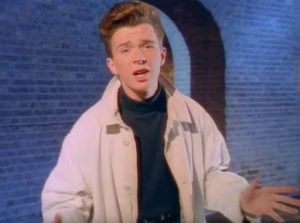 Slick suit, slick dance moves, even slicker voice. But Rick Astley would never agree to a super slick short back and sides – instead, he opted for a glorious quiff.

He chose to defy both stylists’ orders and gravity the moment he reached for the hairdryer and extra firm hold hair wax. 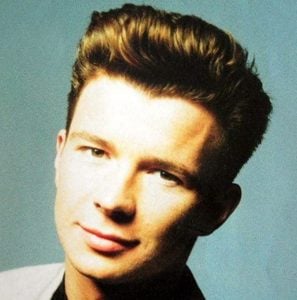 Astley championed the sort of resolute quiff which Vanilla Ice could only dream of, and one which would win any fight with a hurricane. A few years after taking an early retirement from the music industry, Rick returned with a whole new look: cascading long locks that would make Curt Steiger jealous. 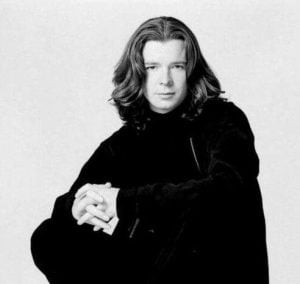 Now 55 years old, Rick Astley’s luscious head of hair doesn’t seem to be going anywhere. “I get it imported from China,” the star joked about his hair to Rolling Stone Magazine in 2016.

“My whole family have got pretty strong hair,” he added. “I’m really lucky in that respect.” 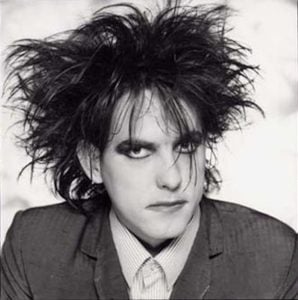 Achieving that ‘just got up’ look all day, every day was clearly the mantra by which The Cure’s instantly recognizable frontman led his (let’s face it, less than) coiffured life. 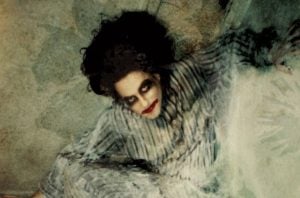 A charismatic indie-rock talisman with a tendency to wear his (dark) heart on his sleeve, Smith completed his aesthetic with wild, untamed locks that defied gravity.

Often copied, yet never bettered, Smith’s barnet was the stuff of 80s legend. 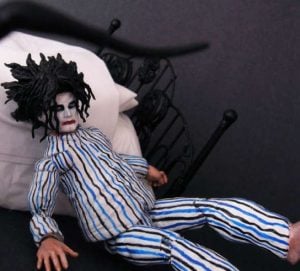 This look has proven timeless: Robert Smith rocks it to this day. In a 2018 interview with Time Out Magazine, he mentioned his hair while musing on his longevity as an artist.

“I’ve only got one life, and I should really be doing stuff that brings me satisfaction,” he pointed out. “Anyway, one day my hair will all fall out and I won’t look gothic any more. So just wait for that.”

5. Is This Love? Well, Probably Not With a Pompadour of That Magnitude, Dave 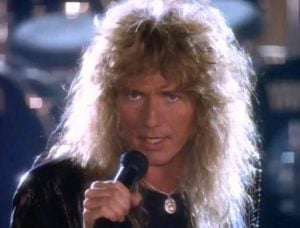 Whitesnake wouldn’t be complete without singer-songwriter Dave Coverdale’s mullet, which rocked out alongside the band onstage from 1983 to 1990. But rockstars across the decade were also sporting adventurous updos, from Poison to Motley Crue, Skid Row, Van Halen, KISS and Aerosmith.

By 2006, Coverdale was looking back at his supersized mane – as well as his old stage persona – with mixed feelings: “[Whitesnake] got louder and louder, and so did I, to the point now where I have to get dressed up like a “girly man” and tease one’s questionable bangs or hair and it’s all becoming a bit… boring.” 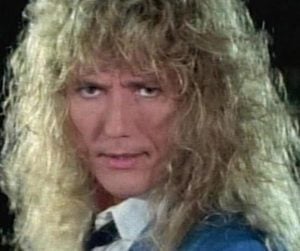 Now aged 69, Coverdale still enjoys a full head of hair. When questioned on his mop in a 2020 radio interview, he said, “Oh, God. I’m so follicly blessed, it’s not even funny.” 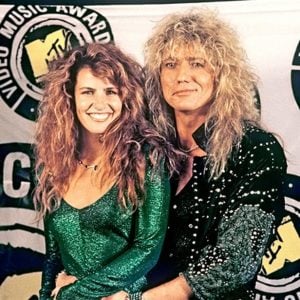 “Last year, my assistant made a video of me proving that my hair wasn’t a wig,” he recalled. “Some guy on Instagram [wrote], ‘C’mon, David, it’s time to lose the wig.’ And, of course, thousands of people jumped all over him, going, ‘No, it isn’t. No, it isn’t.'”

“So I did a video ‘Postcards From The Road’ when I was in Prague, saying, ‘No, this is real. It’s absolutely legitimate.’ And yeah, I’m very follicly blessed — thank God.” 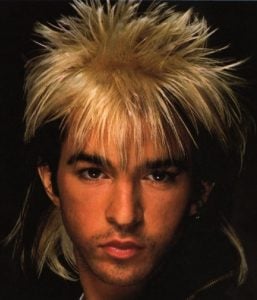 Born Christopher Hamill, Limahl rose to fame as the lead star of Kajagoogoo, and went on to enjoy a successful solo career in the 80s. His trademark? A wildly spiked, two-toned mullet: platinum blond on top and a deep brown underneath.

Limahl’s unusual styling actually predated his rise to musical fame. He first adopted this famous look while starring in a production of Godspell. 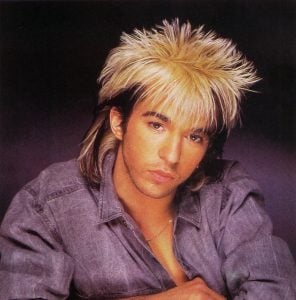 So famous was Limahl’s hair in the 80s, it even inspired a certain X Men character’s design. Illustrator Arthur Adams bestowed Limahl’s unique locks on his character Longshot, a fugitive with superhuman luck, created in 1985. As a result, Longshot was the first Marvel comics character to sport a mullet. 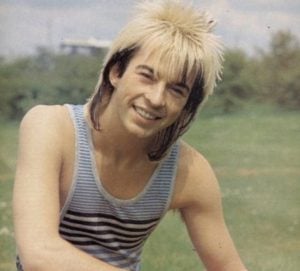 3. He-Man Masters the Universe, But Doesn’t Quite Get to Grips With His Hair 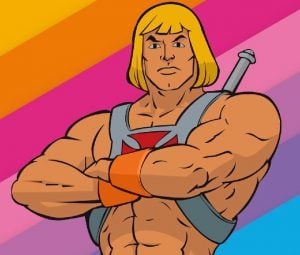 Despite being Master of the Universe, He-Man had one particularly ridiculous mop that drew plenty of ridicule. But though his long bob may have better suited She-Ra than her hunky counterpart, this style wasn’t entirely new to male stars. 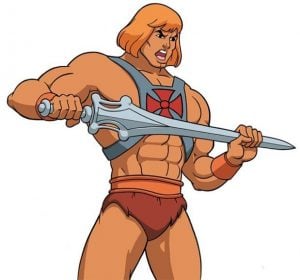 Alternatively named the Page Boy, this haircut would be very familiar to fans of Eight is Enough, the comedy series that ran from 1977 to 1981. And in the world of animation, Mogli from The Jungle Book styled a long bob long before He-Man was even dreamed up. 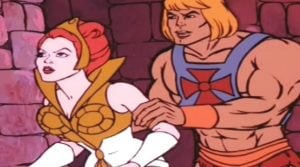 The much older cartoon star Prince Valiant rocked long bobs with aplomb – and his style has truly withstood the test of time, as he’s appeared in comics from 1937 to this day.

2. Ballsy ‘Do’ From Streetfighting Legend, Blanka 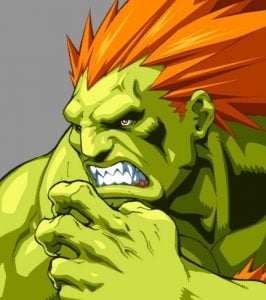 Even video games didn’t escape the sporadic case of tragic hairstyles, and if evidence was ever needed then look no further than Blanka from hugely popular beat ‘em up arcade game, Streetfighter. 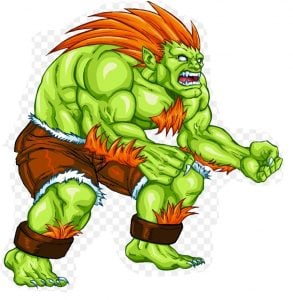 Blanka was originally planned as a human character by creators Capcom, but his design soon evolved into a savage creature. Looking like a cross between a Troll and the Incredible Hulk, this hands on fighter had a shock of flame-red hair, which grew in a peculiar backwards fashion. 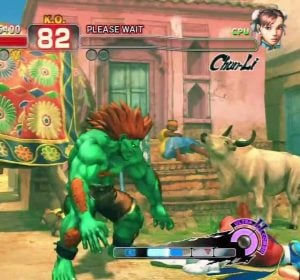 GamesRadar has named him as one of the best Capcom characters of all time, stating in 2013 that Blanka is “the wildest of the crazy characters in the game.”

“Blanka exemplifies the special brand of insanity that made us love Capcom,” they added. “Raised in the wild since childhood, the green man comes from the forests of Brazil and is ready to tear apart whatever fighter stands in front of him.”

But when it comes to spectacular fighters with even more spectacular hair, Capcom had plenty more to offer… 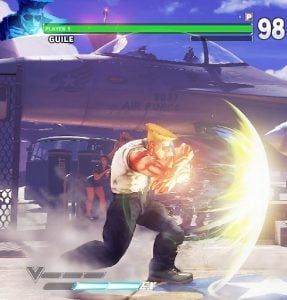 Imagine Dolph Lungren’s ‘do’ in Rocky III, but even more preposterous looking and you’re on the right track. Guile of the Street Fighter franchise had a flattop that was certainly a sight to behold.

According to sourcebooks, Guile styles his locks with special army-order hairspray to keep every strand perfectly in place. His ginger flattop was always paired with military fatigues. 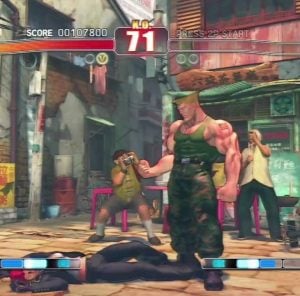 Effectively the ‘mother of all flat-top haircuts’, we could guarantee that were you to rest a spirit level atop it, then everything would line up.

Meanwhile the flattop, created with electric clippers and a whole lot of wax, was enjoying a resurgence in the 80s. It previously won popularity in the late 60s and 70s – but has yet to make another major comeback.