The Most Valuable ‘Sylvanian Families’ Toys

Rare Sylvanian Families, like Beanie Babies and Care Bears, can be worth a lot of money. Some of the most valuable include the Vintage Mansion House, the Grand Hotel With Eight NIB Furniture Set, the Vintage Timbertop Bear and the Super Rare Large Chocolate Rabbit.

Most of us will probably remember Sylvanian Families from the countless TV commercials that seemed to be advertising them at all times of the day. However, they were also a popular toy for many young children in the 80s and 90s, and if you’ve still got some of the figurines or toy sets in your attic then they could be worth a fortune in today’s money, especially if they are rare items or special editions. How much money exactly? Scroll down to find out! 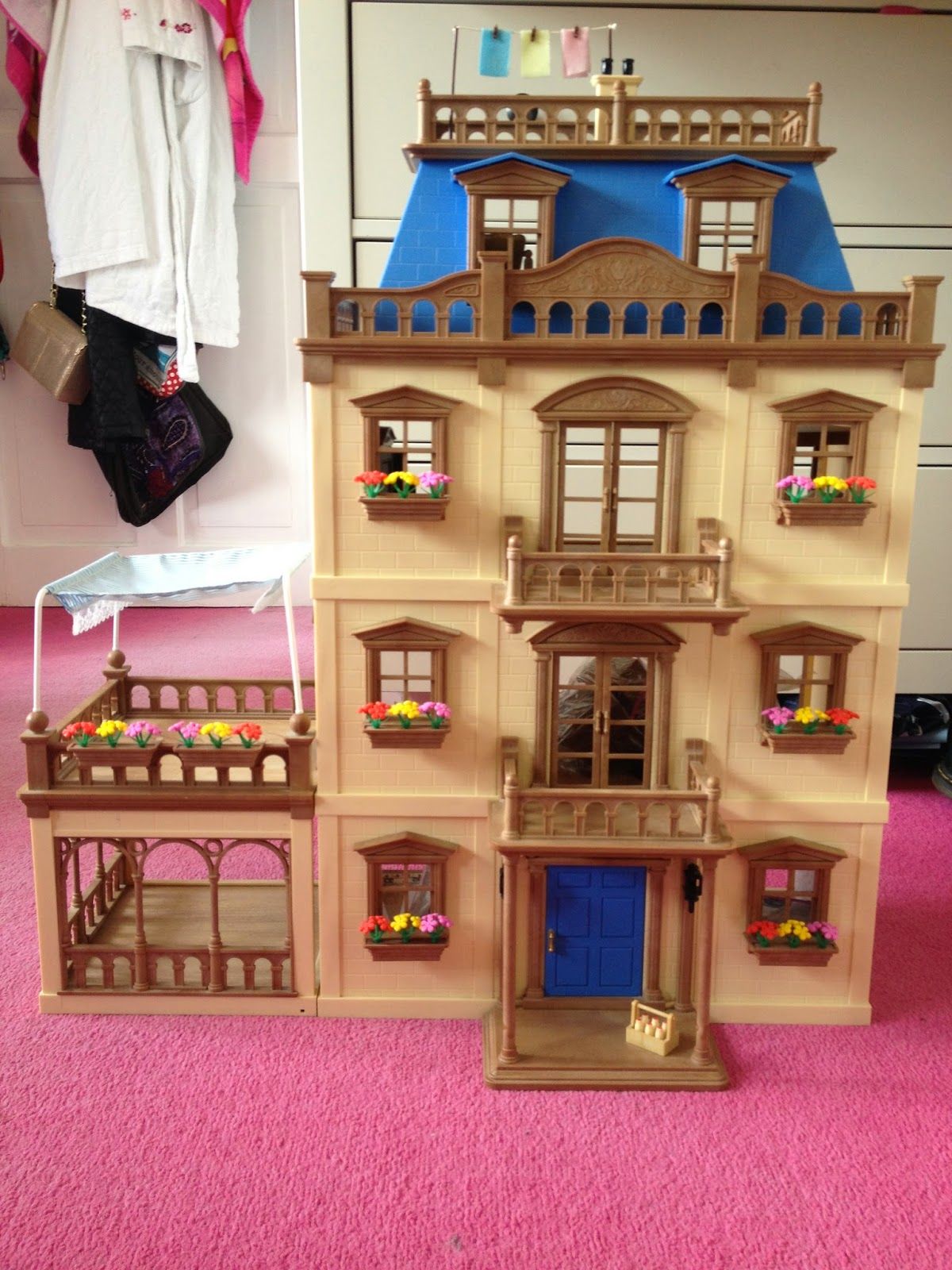 This Vintage Mansion Doll House has been valued at a whopping £125 on eBay, with some sellers claiming that there aren’t many complete mansion sets available at all anymore, with that scarcity pushing up the value online. One seller from Newcastle managed to sell his Sylvanian Families’ house for over £100 despite the fact that it had undergone several repair jobs over the years, which means collectors must really be desperate to get their hands on one of these houses!

The house comes in both a blue and green colourway, and features three storeys plus a balcony, so your Sylvanian teddies can sit outside when it’s sunny! It might be worth checking if you’ve got one of these lying around next time you’re up in the attic! 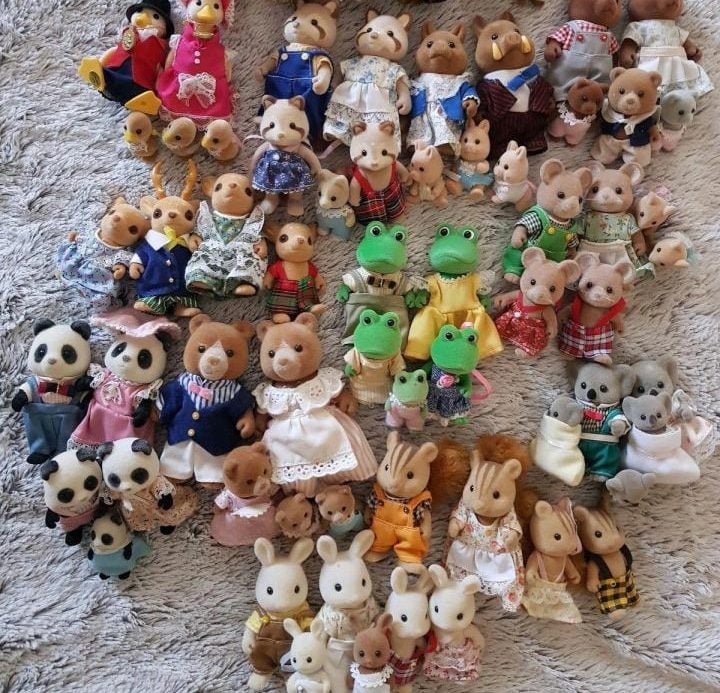 Though most Sylvanian characters are not worth much by themselves, bundle a few together and you can make, well, a bundle! If you’ve managed to acquire a few different families over the years then you can sell them in a group and rake in a nice amount, with some eBay bundles like the one above selling for over £200. Auctions often start at 99p, but eager collectors are always ready to splash their cash on a large group of Sylvanian figurines.

Whilst you’ll have to make sure that they’re in excellent condition, you don’t actually need to specify which sets the characters come from in order to start selling them. You also don’t have to bundle together full sets, though they are obviously more desirable than an assortment of individual figures. 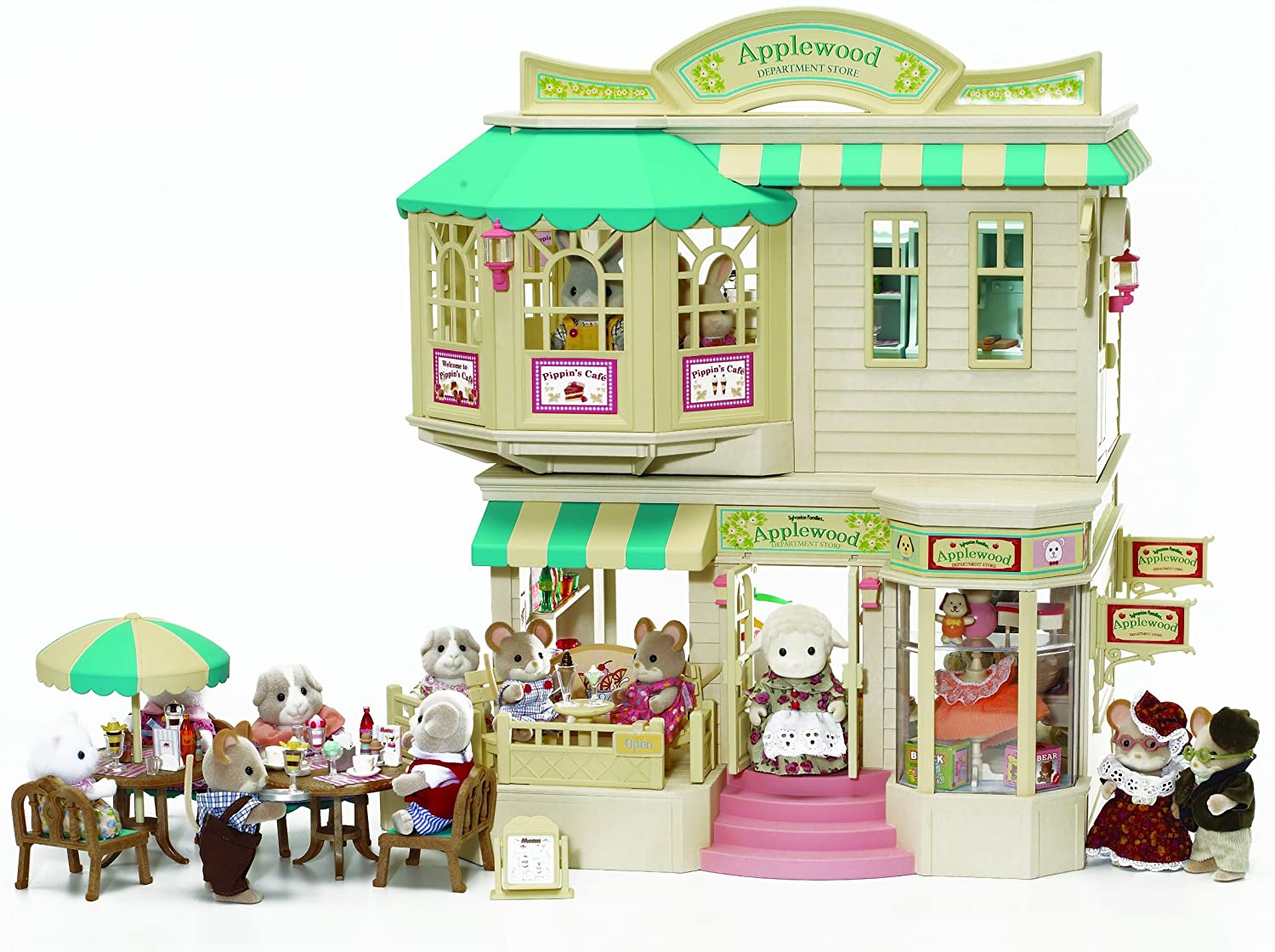 You may well remember either playing with the Applewood Department Store as a child, or at least seeing one of the hundreds of adverts for it on TV. However, did you know that this bit of Sylvanian Families kit could earn you over £250 on eBay, or that one seller even managed to flog theirs for a whopping £259? Apparently, the set above is worth extra money because it formed part of a special Harrods edition and contained black stickers which allowed you to turn it into a mini “Harrods Department Store”.

If you have one of these in the attic somewhere, it’s worth checking whether it contains the Harrods stickers because if so, you could be sitting on a goldmine. However, even if you only have the standard edition of this playset, you could still make a pretty penny. 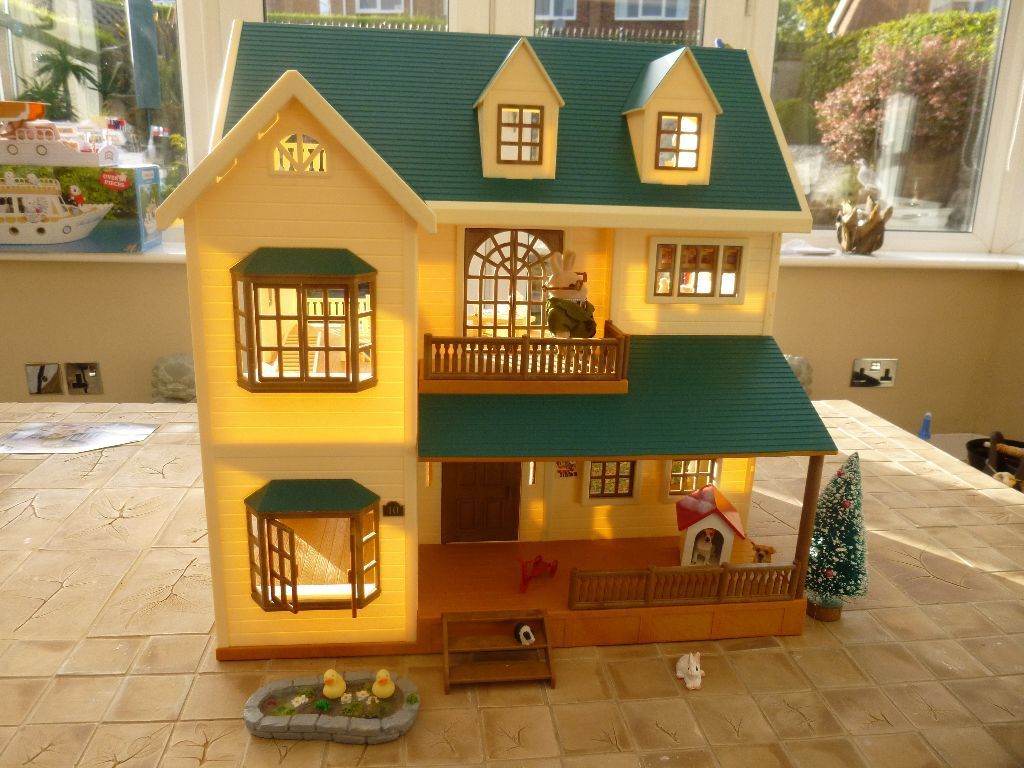 These Sylvanian Families’ “House on the Hill” sets originally retailed at £39.99, so anyone who hasn’t already given theirs to a charity shop will be pleased to hear that it’s now worth a lot more. Following its release in 2002, the House on the Hill became the largest toy home ever made by the toy brand, containing three floors, two balcony areas and even a nursery on the top floor.

One eBay seller recently listed their House on the Hill in ‘hardly used’ condition and ended up fetching £280 at an online auction. However, just be aware that if you do have one at home, you’ll need to present it in the original packaging in order to get the best price. 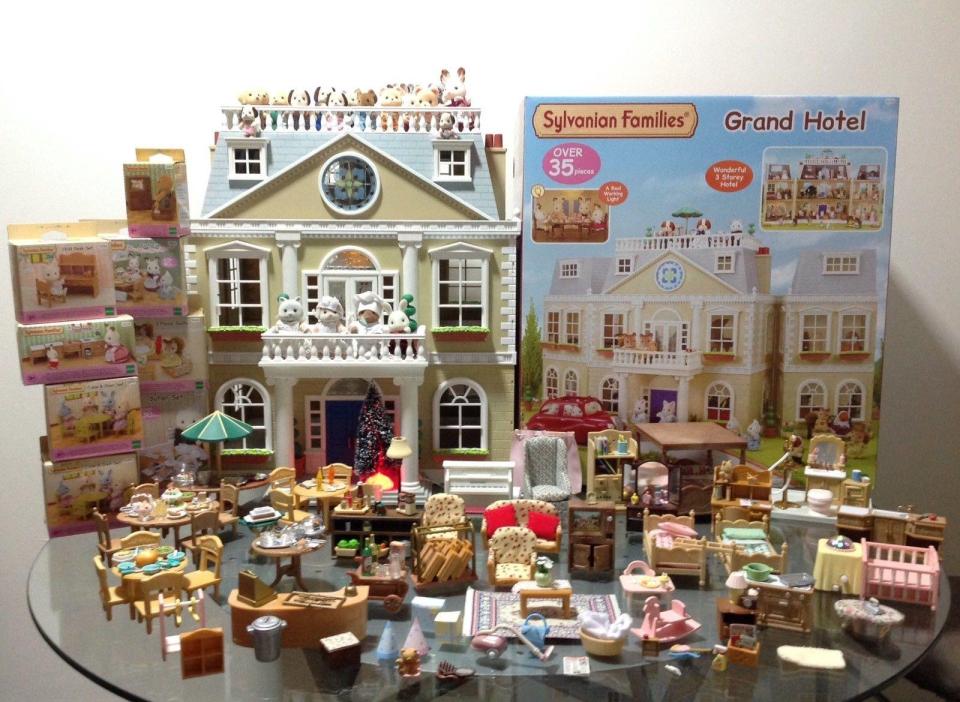 One seller started the bidding for this particular set at a measly £25, and ended up raking in a whopping £325! Collectors went crazy for the Grand Hotel with all of its accompanying furniture, which includes over 26 figures and other accessories. This set is one of the fancier Sylvanian Families toys out there, and features an intricate chandelier and even stained glass windows for any figurines that might want to gaze out over the garden.

Surprisingly, the Grand Hotel is still available to buy in Tesco today but it doesn’t contain any extra accessories, which might explain the high asking price. Again, the set was sold for over £300 thanks to its pristine condition and original packaging, so make sure your Sylvanian Families toy is in good nick before putting it online. 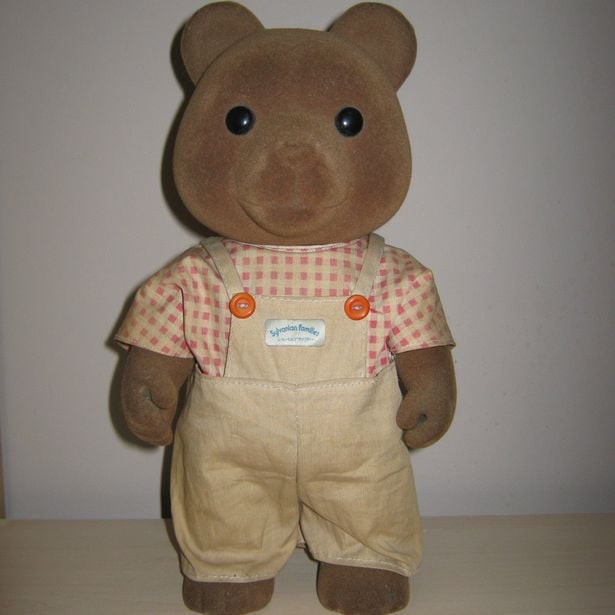 This Vintage Timbertop Bear might not look all that remarkable, but it managed to fetch a whopping £460 on eBay! It was released in the 1980s which makes it one of the older models out there, and collectors are always willing to pay more for toys that are over 30 years old. You might also have noticed that this bear is slightly larger than the average Sylvanian Families figurine; it measures approximately 11 inches so it’ll be hard to miss if you’re having a look around the attic for one.

The collector who managed to sell his toy for £460 did mention in the description that the bear was “in very good condition for its age”, although it did have some wear and tear, plus a slightly yellowed t-shirt. However, this didn’t seem to matter to the nine bidders who started fighting over it! 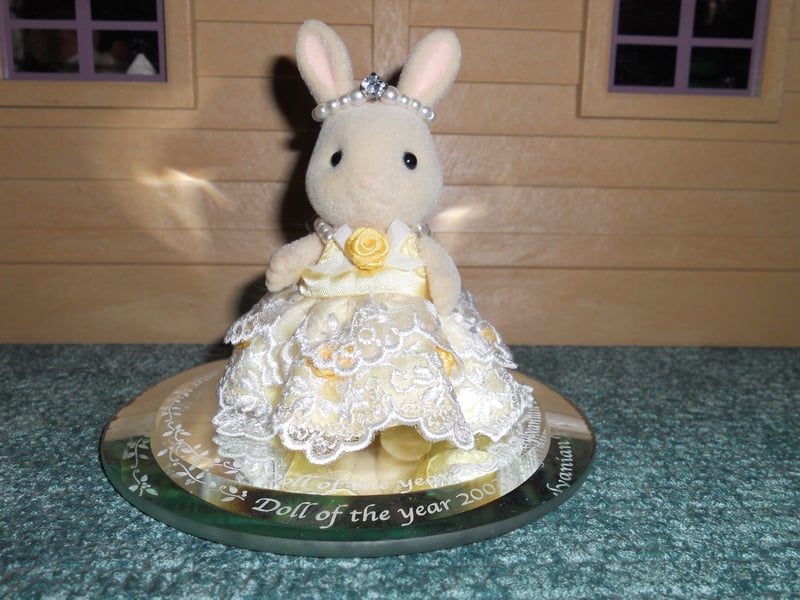 In 2003, Sylvanian Families released the ‘Japanese Doll’, which featured a rabbit wearing a rather fetching pearl tiara and yellow rose dress. This particular model came mounted on a plaque reading ‘Doll of the Year’, so it was definitely aimed at serious collectors rather than children. Only 100 of these figures were ever made, according to one eBay seller from Derby, which means that collectors are always looking to snap them up. For example, the figure pictured above was first listed for £99, but eventually sold for over five times that amount!

However, bear in mind that you’ll need a certificate to prove this is a genuine ‘Japanese Doll’. It’s also worth finding the original packaging and the shiny display plate, otherwise, collectors might not be as interested. 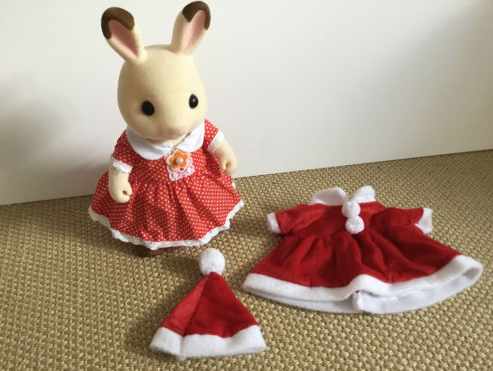 This is another example of a larger figurine that is currently listed on eBay with a starting price of £599. According to the seller, this is a ‘super rare’ rabbit that measures approximately 11 inches and is wearing a red and white spotted dress. Apparently, the rabbit formed part of a rare Sylvanian Families promotional campaign and only a few people managed to get their hands on one.

It comes with extra accessories such as a dress, underwear and even a Christmas hat/gown combination for the festive season. Bidding is still ongoing with this particular item so we won’t know for a while how much the final bid totals. However, we’re sure it’s going to be pretty high if the seller can get away with that kind of starting price and doesn’t even have the original white box packaging. 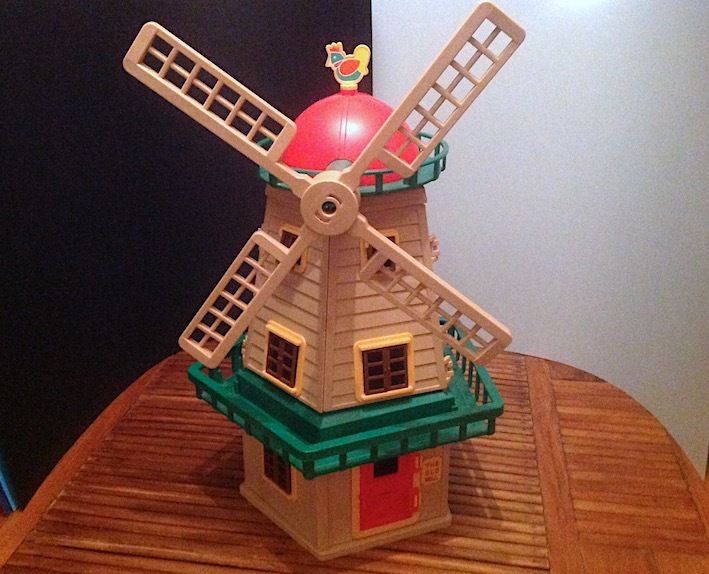 And finally, by far the most valuable Sylvanian Families toy on the list is this Old Mill Windmill, which features red and green detailing plus a rooster sitting on the top. Apparently, it’s a very rare first edition of the windmill toy and comes complete with two pieces of furniture. The seller is asking for so much because they’ve kept the windmill inside its packaging for years, meaning that none of the seals or card popouts have been broken.

Even the outer box itself has been stored carefully so that the colours haven’t faded with time. Again, bidding is still ongoing so we can’t wait to see how much collectors actually pay for this original, untouched ‘Old Mill Windmill’.

Toy’s Dream Project was a collaboration between several prolific Japanese toy companies, to create greetings cards featuring recognisable characters from properties like Transformers and Zoids. However, the promotion wasn’t only limited to cards, as several limited-edition toys were also created and released in Japan as part of this joint effort. Do you see where we’re going with this?

The Brown Mole Family was released as part of this project and was only available to purchase in Japan for a limited time. This scarcity has made it hugely desirable to collectors, with listings that include the characters’ original box and outfits fetching around $500, or £384, on resale websites like eBay. 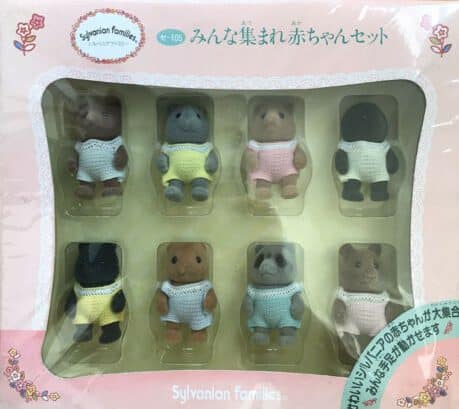 If animals wearing intricate frilly outfits are already cute, then the only way to make them cuter is to make them babies. That’s the philosophy behind the Calico Critters Baby toy sets, which feature precious baby animals and their various accessories, from cribs and soft play areas to baked goods and musical instruments.

The Calico Critters Baby Gathering set was a Japan-exclusive toy set that featured eight of the babies in matching babygrows, and it is coveted by collectors due to how rarely it shows up on auction sites. Though it is hard to find previous listings due to the small number of these sets in circulation, those that have been sold fetched a price of £277, with the original box intact and included. 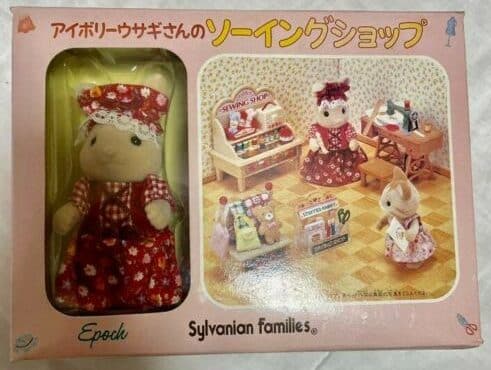 The Sewing Shop with Ivory Rabbit is another retired Japan-exclusive toy set that is now looked for by collectors the world over. It features head seamstress Ivory Rabbit: along with a desk, tiny sewing machine, storage shelves covered in bobbins and other sewing regalia, and a selection of hand-sewn blankets, toys and bags.

This is another toy that does not show up on the resale market often, which obviously leads to prices being on the higher end as far as second-hand Sylvanian Families go. Prices for an Ivory Rabbit with the original box included start at £220, but can go as high as £445 if the box and figure are in like-new condition. 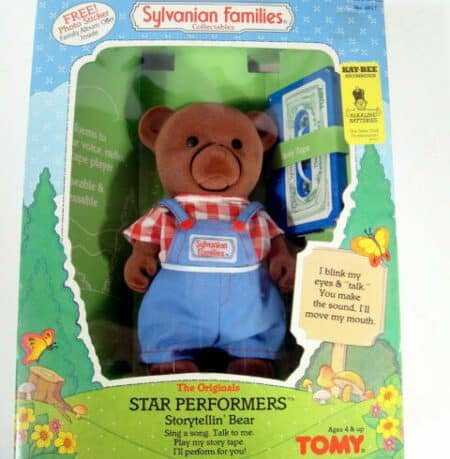 When you think of Sylvanian Families, you probably think of adorable animal figures just a couple of inches tall, dressed in immaculate cottagecore clothes. However, even Sylvanian Families knew they had to branch out in order to remain relevant in such a competitive toy market, leading to more unusual offerings like Sound Parties Storytellin’ Bear.

This brown bear in lumberjack garb is taller than your average Sylvanian Families’ figure, and comes equipped with a sound sensor, allowing it to move in response to your voice. It also comes with a tape that contains a story, which he acts and dances along to when played. Given the novelty of this toy, a fully functional Storytellin’ Bear usually sells for £310 on the resale market. 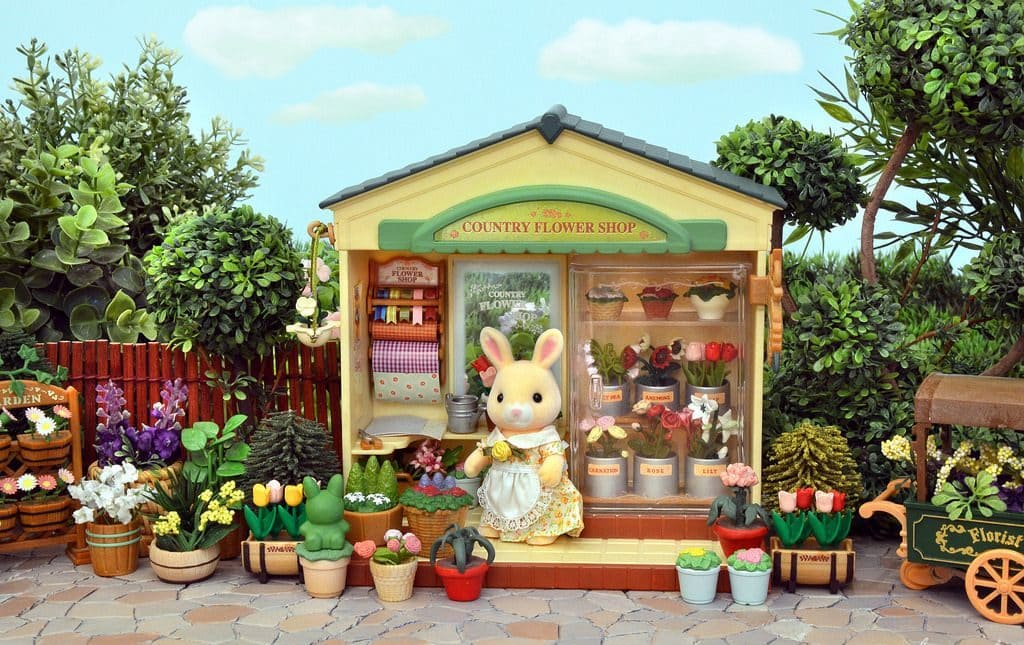 As well as the figurines themselves, Sylvanian Families also sell storefronts and houses separate from any specific characters, allowing kids to mix and match and choose which animals live and work in which places. Lots of these storefronts have fallen out of favour with collectors, but one remains hugely sought after: the Vintage Country Flower Shop.

Though the price varies depending on whether the flower shop comes in its original box and how much wear and tear it has, on average it can be found on resale websites like eBay for £319.