The Real Life Partners Of The Office (US) Cast

The US version of The Office was a bit like marmite for audiences – you either loved it, or you hated it.

But if you were a fan of the mockumentary-style American sitcom, then never fear: we’ve put together a list of the real-life partners of The Office cast.

All of the cast and crew on the show famously got on like a house on fire, and they formed a strong bond during a whopping nine seasons of filming. There were lots of on-camera romances, from Jim and Pam’s heartfelt relationship to Ryan and Kelly’s dysfunctional on-off pairing. Even Dwight and Angela eventually ended up getting married.

Scroll down to find out all about the real-life loves of The Office cast, including some famous faces and even a few Office inter-relationships on the list (and we thought romantic liaisons amongst Dunder Mifflin employees were banned). 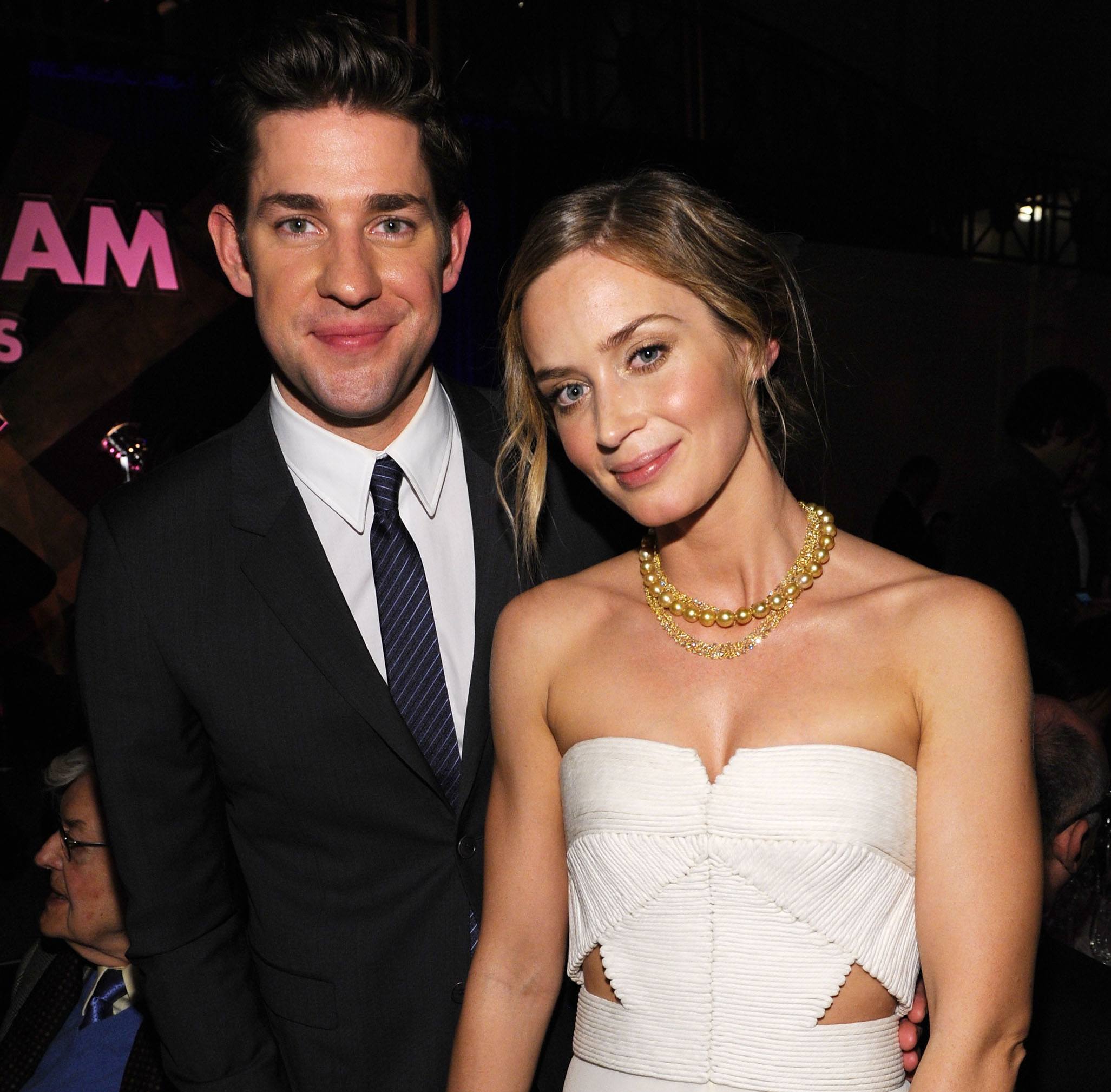 John Krasinski played the lead role of Jim Halpert in The Office, a part which quickly shot him to household name status.

Krasinski starred in every single episode of the hit US comedy as the goofy, mild-mannered salesman, who was hopelessly in love with his co-worker Pam Beesly, played by Jenna Fischer.

But whilst his on-screen relationship with Pam provided the central love interest of the series, away from The Office Krasinski has been happily married to English actress Emily Blunt for almost a decade.

The couple tied the knot in 2010 after dating for two years, and they now share two daughters together: Hazel, born February 2014, and Violet, born July 2016. 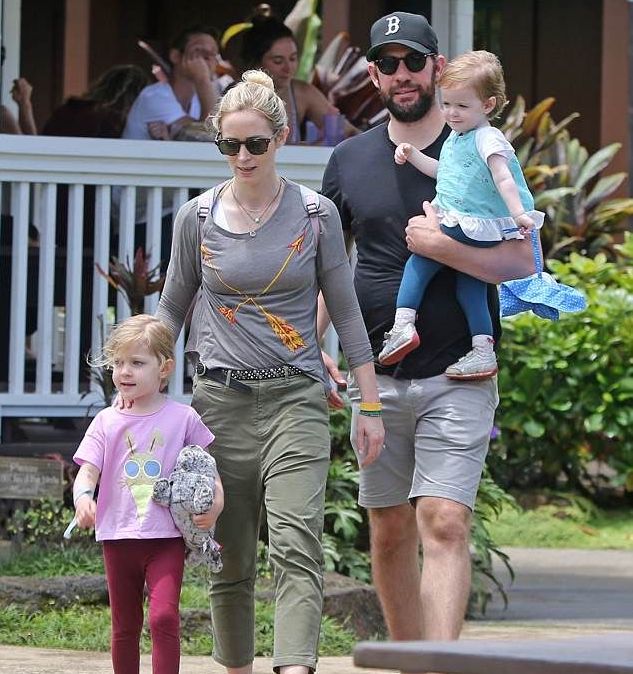 John and Emily are so close that they even starred in John’s 2018 horror film A Quiet Place together.

The actress revealed that despite her friends’ concerns about a potential divorce being on the cards after their working together, she believes the experience was ‘really super-bonding’.

Now 39, Krasinski is currently starring in Amazon’s Jack Ryan series. He and Blunt are currently shooting a sequel to A Quiet Place. 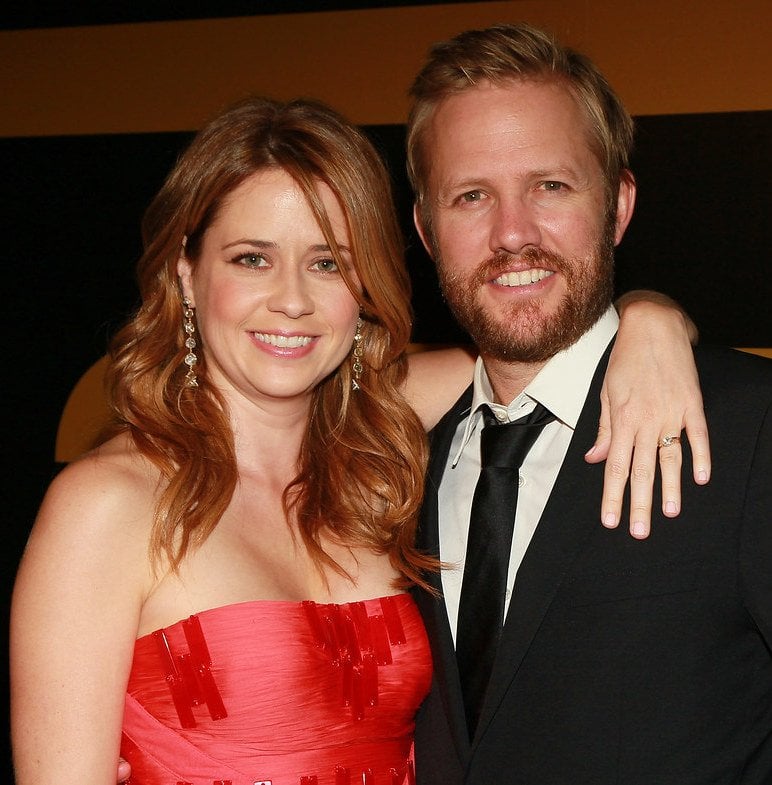 Jenna Fischer famously played receptionist (and later office manager) Pam Beesly on the show, and viewers quickly fell in love with her quiet but steely persona.

At the start of the series she was engaged to the burly warehouse worker Roy, but it was her flirtatious relationship with ‘friend’ Jim Halpert that really sizzled on-screen.

Despite the fact that Fischer has previously emphasised how much she loved working with Krasinski, she’s actually married to Lee Kirk, who has produced Ordinary World (2016) and The Giant Mechanical Man (2012), in which he directed his wife Jenna. 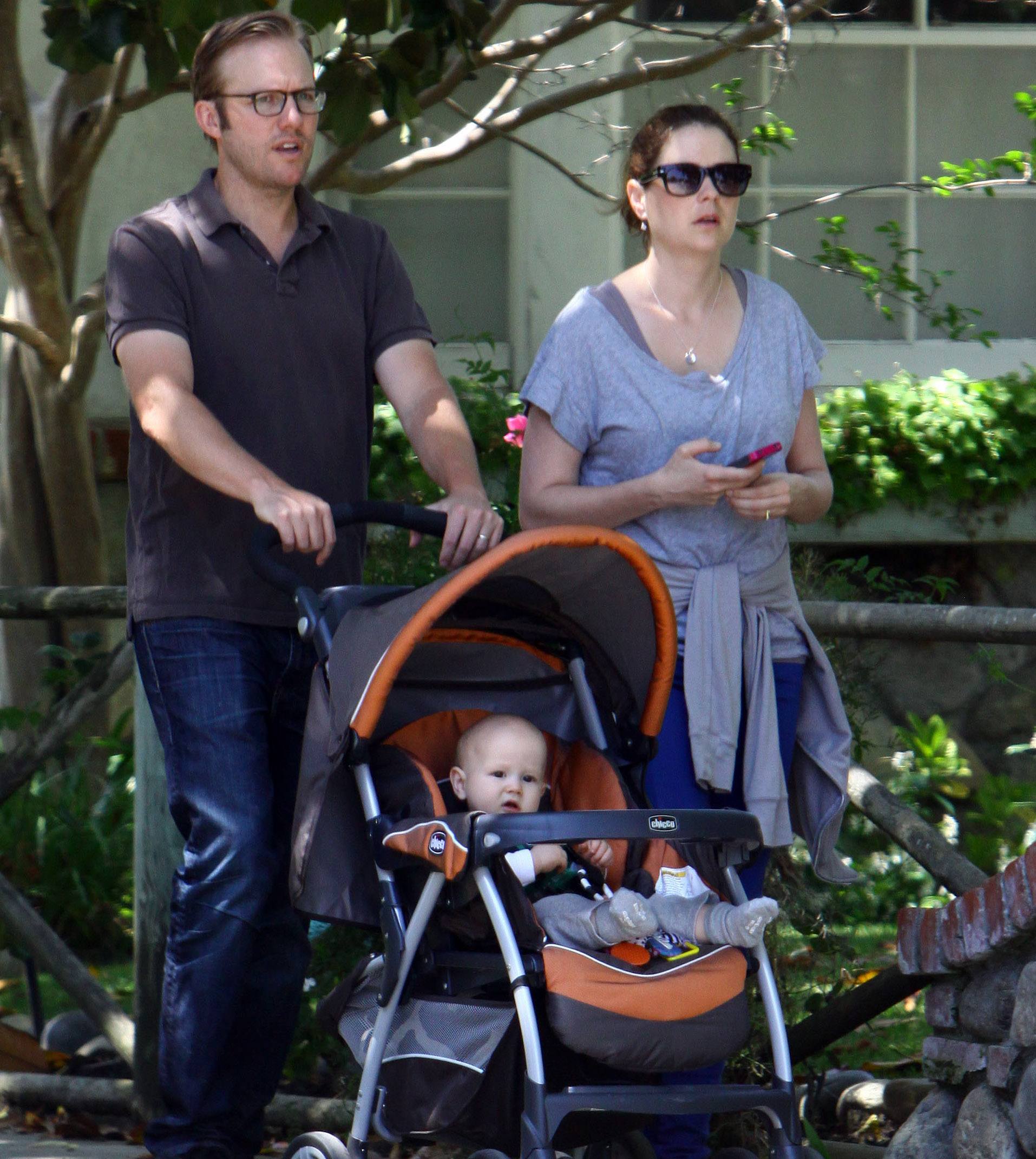 Fischer was previously married to Guardians of the Galaxy director James Gunn from 2000 to 2008, and the ex-spouses maintain a friendly relationship.

Now 45, Fischer most recently starred in the ABC sitcom Splitting Up Together. 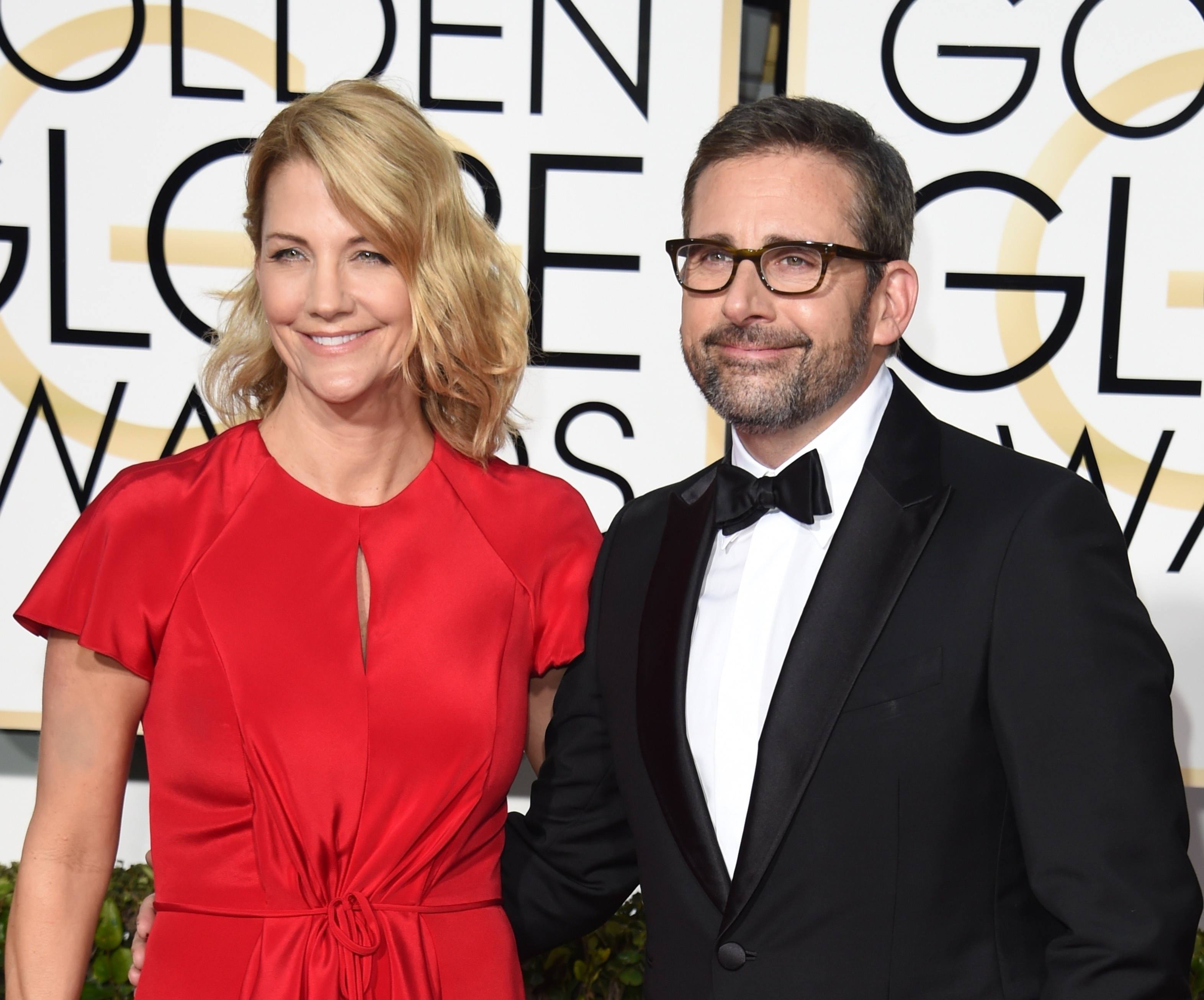 Steve Carell shot to stardom as leading man Michael Scott in The Office. As America’s answer to David Brent, his character was awkward, inappropriate and yet in spite of all his flaws, Michael was lovable too.

Fans of the series were delighted when the branch manager finally found love with HR rep Holly after a series of disastrous relationships.

However, off-screen Carell is happily married to his wife Nancy – the pair have been married since 1995 and have two children together: Elisabeth ‘Annie’ Anne Carell, born 2001, and John Carell, born 2004. 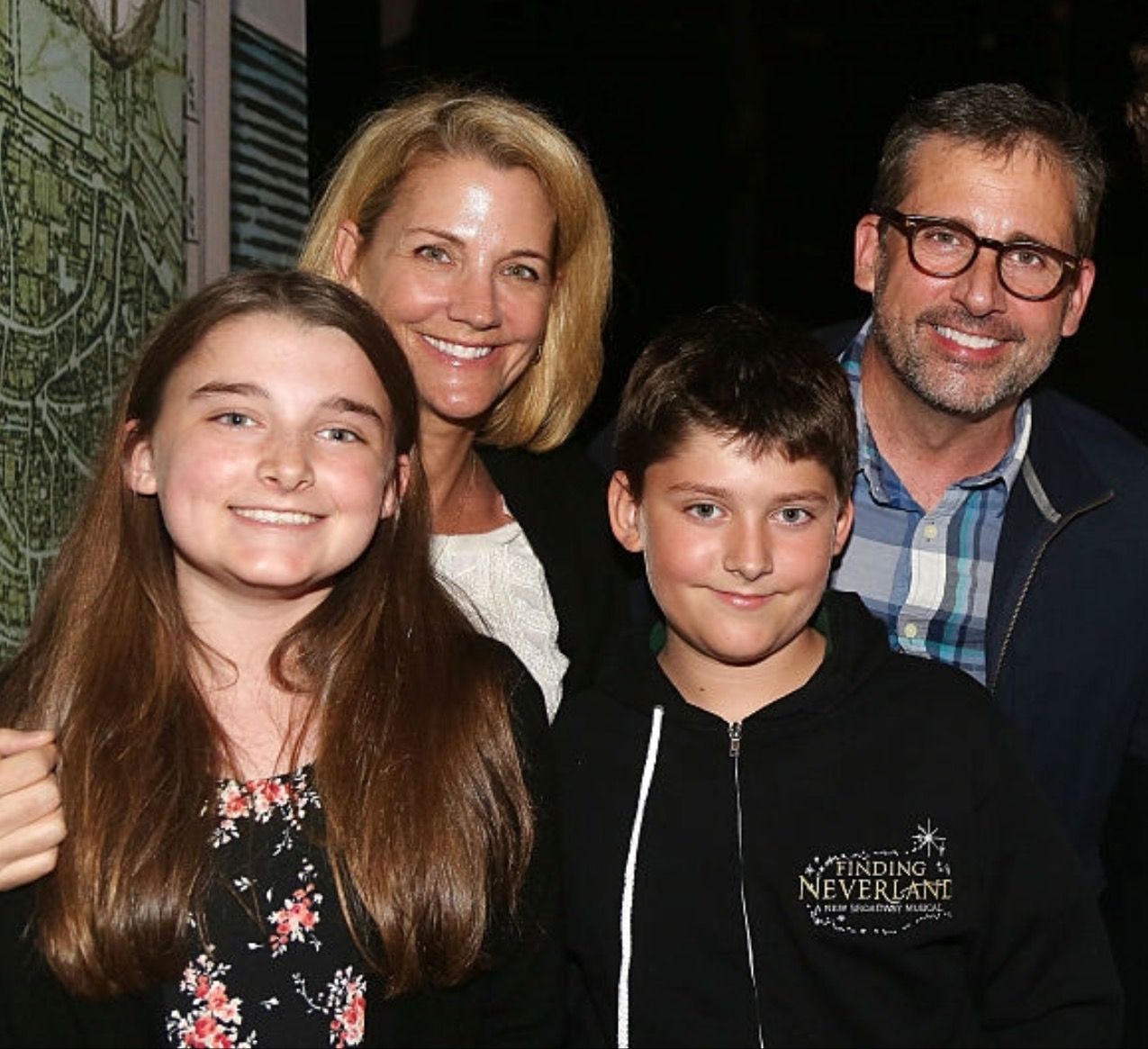 Like co-star Krasinski with his wife, Steve and Nancy have worked together several times in the past – they both starred in The Daily Show and The 40-Year-Old Virgin, and even co-created the comedy series Angie Tribeca together.

Now 57, the Oscar-nominated Carell will next be seen in the Jon Stewart-directed comedy film Irresistible and the Apple comedy-drama The Morning Show. 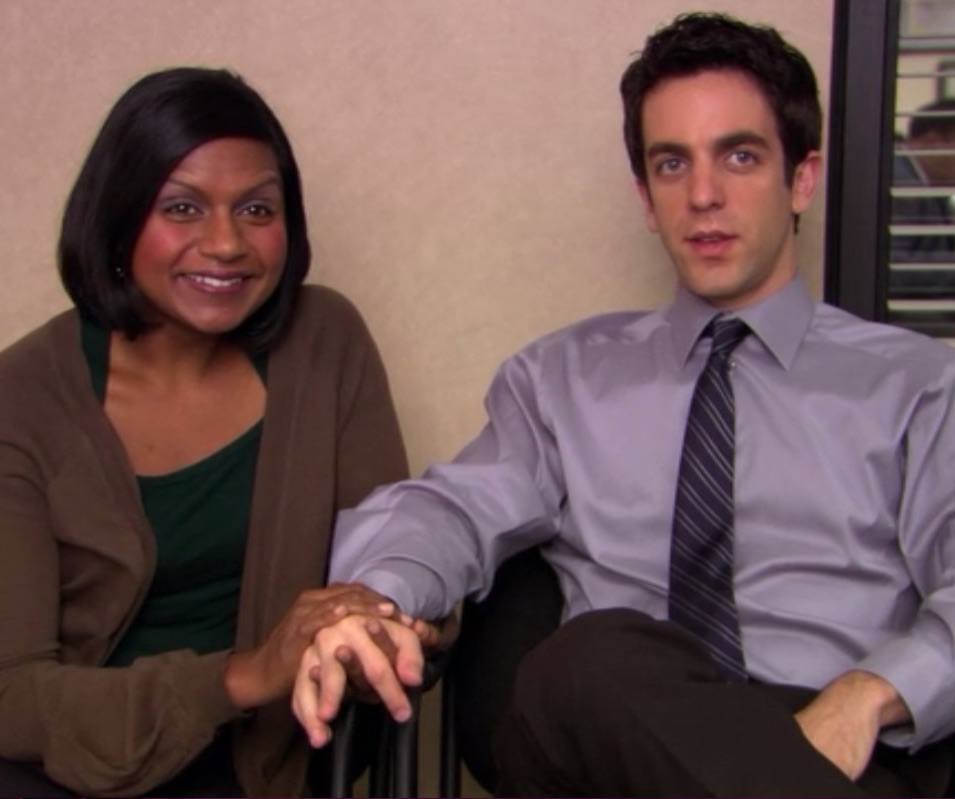 BJ Novak and Mindy Kaling were a true Office couple – they were both writers and actors on the show, and their characters (Ryan and Kelly) even dated on-screen.

In fact, producers were so enamored of B.J. and Mindy’s real-life on-off relationship that they wrote it into The Office for the two performers to act out!

Yep, the hilarious interactions between too-cool-for-school Ryan and babbling HR rep Kelly were actually based on the real-life relationship between the two actors. 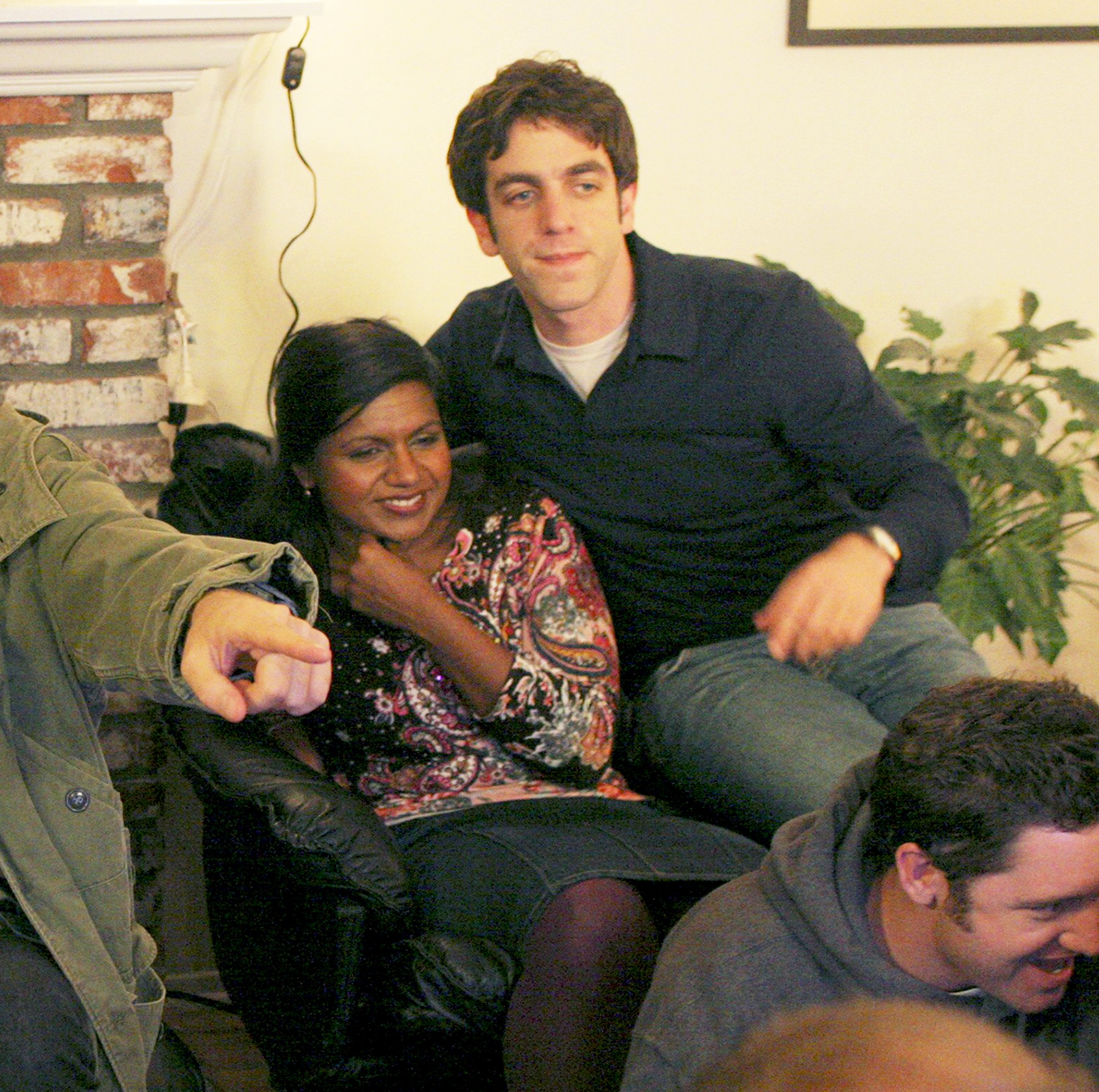 Unfortunately, B.J. and Mindy couldn’t make things work in real life, having last broken up in 2007, but the pair remain friends to this day.

Mindy gave birth to her daughter Katherine in 2017, and though Novak was made godfather (aww!), Kaling has never publicly revealed who the actual biological father is. It’s not currently known whether B.J. is dating anybody. 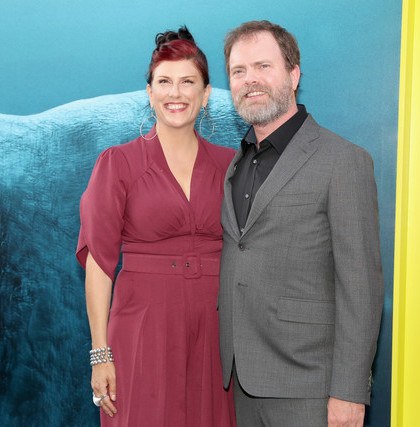 Rainn Wilson played everybody’s favourite office salesman Dwight Schrute. Dwight was a hilarious jobsworth who despised his co-worker Jim and just wanted to do what he was good at: make sales and grow beets on his farm.

In The Office, Dwight had a secret affair with Angela Martin (whom he later ended up marrying).

Away from the small screen, actor Rainn Wilson has been happily married to his wife Holiday Reinhorn since 1995.

The couple met at an acting class in Oregon and now have one son together named Walter, born 2004. 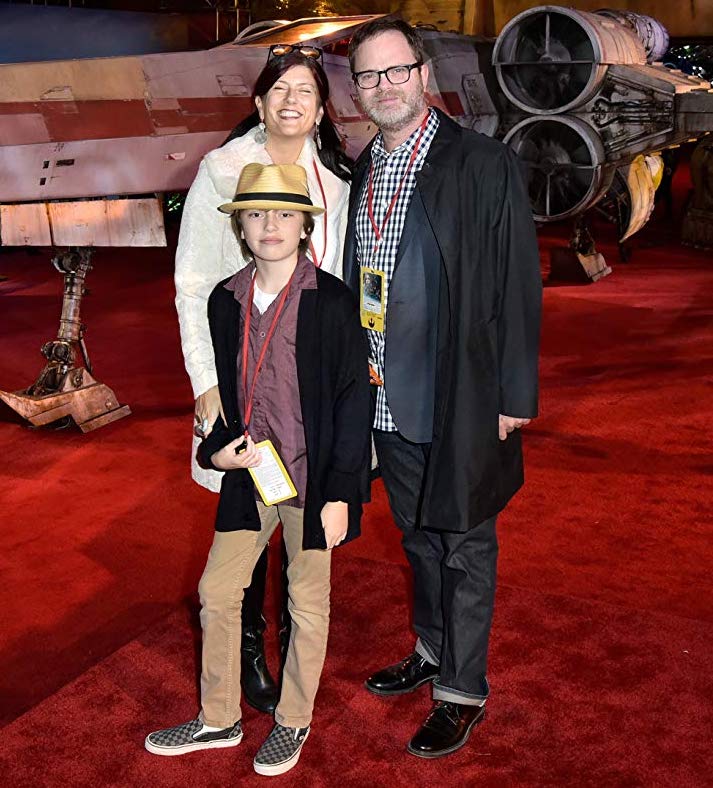 Wilson and Reinhorn now split their time between LA and Oregon; Rainn keeps a number of animals at their house in the latter, including a zonkey and two pot-bellied pigs!

Holiday is a fiction writer who specialises in short stories – she’s worked with her husband on his Soul Pancake Youtube channel which promotes mindful living and mental health awareness amongst young people. 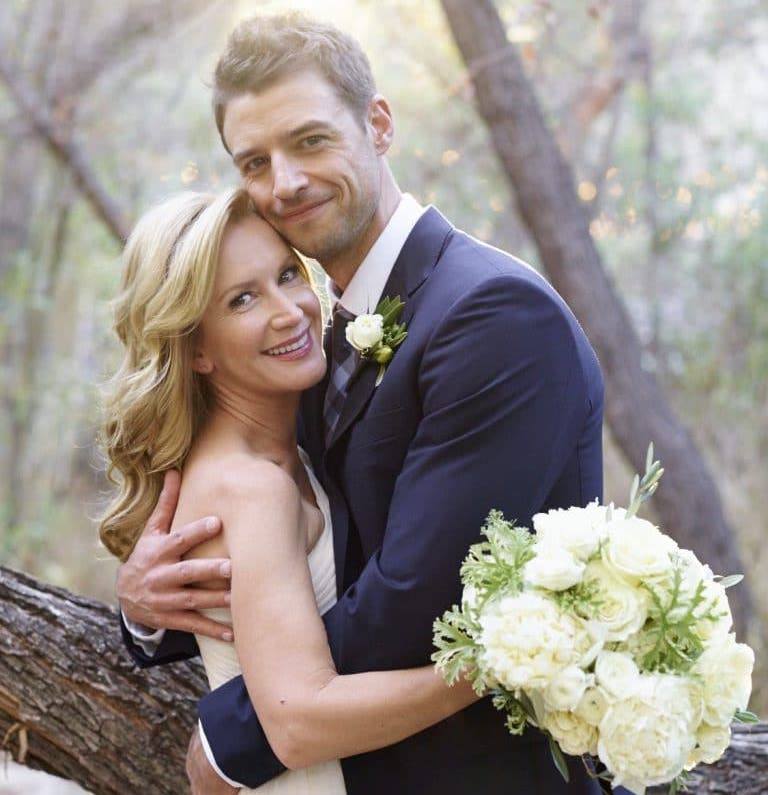 Angela Kinsey played her namesake Angela Martin on The Office for the full eight years the show was on the air.

Angela was known for her strict approach to work and no-fun policy, which often meant she was at odds with a lot of her colleagues.

In real-life Kinsey is a bubbly personality and is very close friends with her Office co-stars Rainn Wilson and Jenna Fischer.

On top of that, she recently married her toy-boy hubby Joshua Snyder, an actor and baker – the pair got hitched in 2016 and have been man and wife for over three years now. 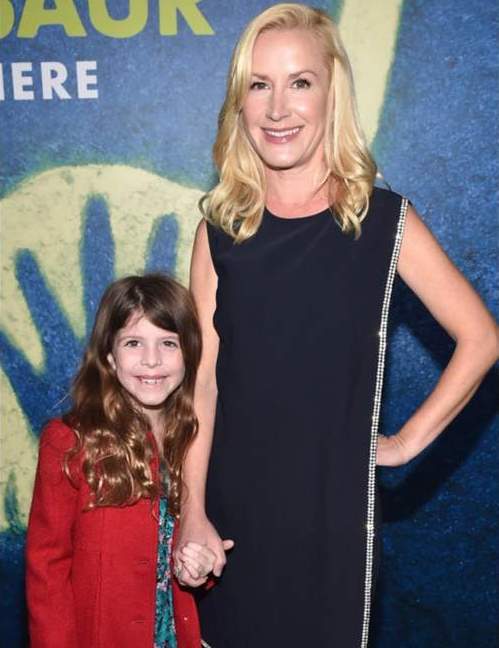 Kinsey was previously married to Warren Lieberstein, the brother of Paul Lieberstein, who played Toby Flenderson in The Office. 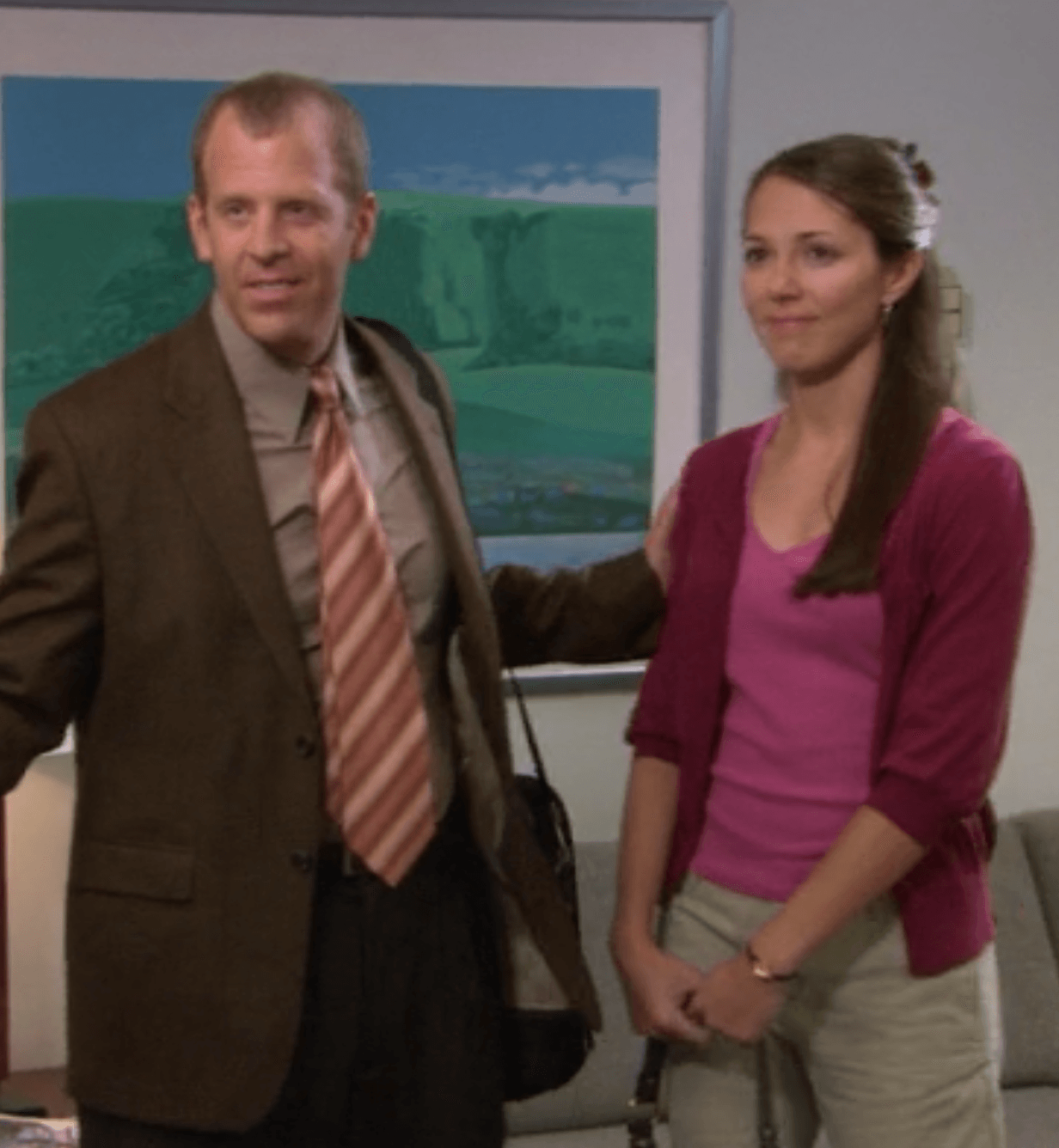 Paul Lieberstein played bumbling HR rep Toby Flenderson at the Scranton branch office, and his love life was never all that successful.

Poor Toby harboured a crush on Pam for years, only to see her get married to their co-worker Jim.

Luckily, actor Paul has been far more lucky in love – he’s been married to Janine Serafin Poreba, a Harvard-educated academic and Lieberstein’s second wife, for over ten years and the couple now reside in the trendy Brentwood area of Los Angeles.

Poreba appeared on a 2007 episode of The Office, Dunder Mifflin Infinity, as Toby’s new girlfriend Amy.

Their marriage was announced in the New York Times after a mixed-faith ceremony was held at Battery Gardens, NYC in 2008. 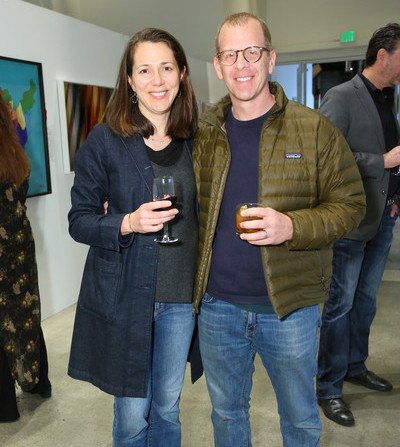 Funnily enough, as well as Paul’s brother Warren being married to Angela Kinsey, sister Susanne Lieberstein is current head of programming at Youtube Premium and is the wife of Greg Daniels, the head writer of The Office.

The NBC show was definitely an all-family affair for the Liebersteins! 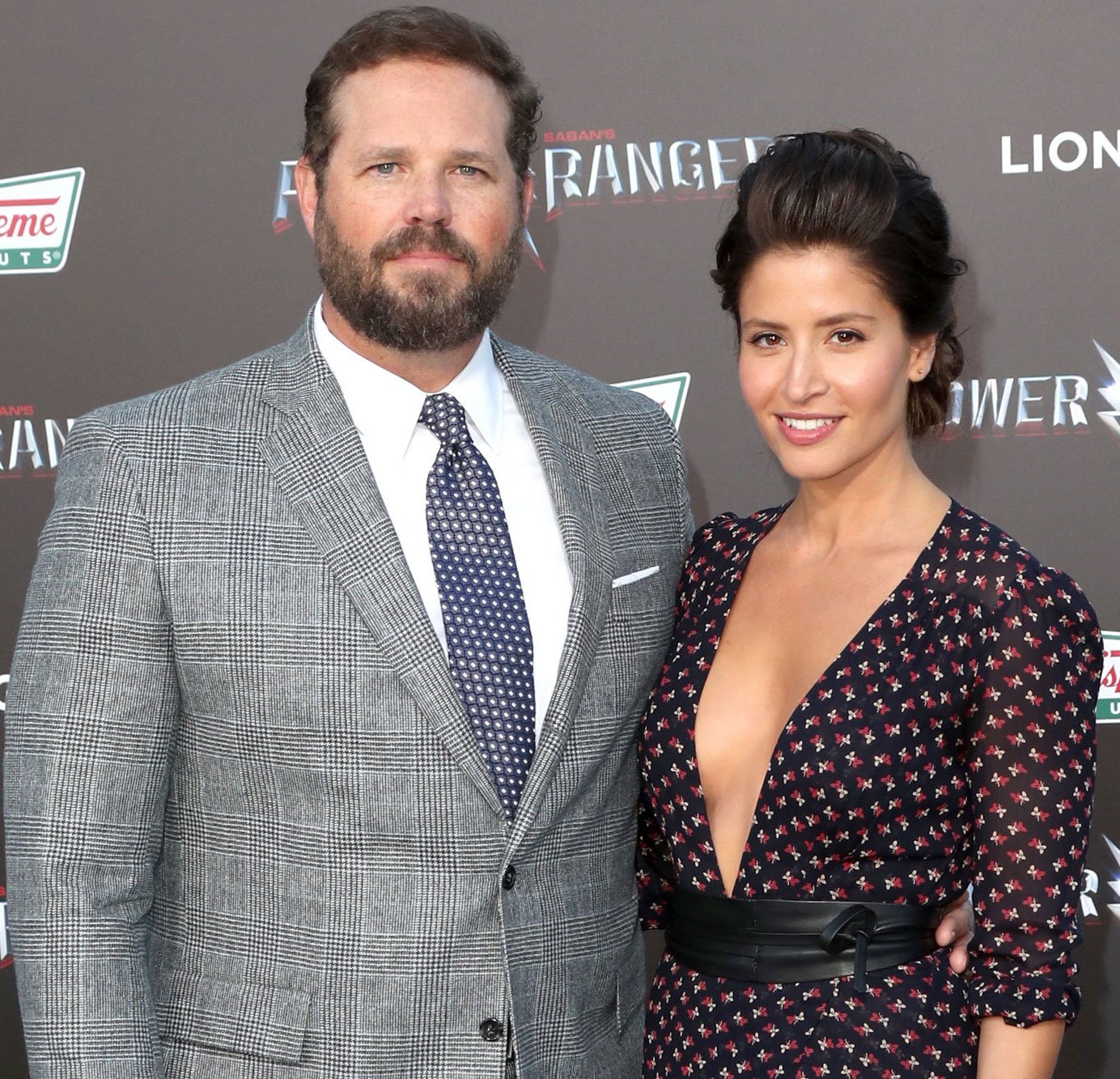 David Denman was a popular supporting character in the early seasons of The Office – for the first three series’ he played Pam’s burly fiancé, Roy Anderson.

Roy was famously indifferent to setting a marriage date with Pam and the couple only seemed to be together for the sake of it.

However, in reality we don’t think that’s the case for Denman and wife Mercedes Mason, a fellow actor who has starred in Fear The Walking Dead and to whom Denman has been married since 2014.

Incidentally, that’s when she married her husband David, whose character Roy also found love on The Office in a special one-off episode which saw Pam and Jim attend his wedding ceremony. 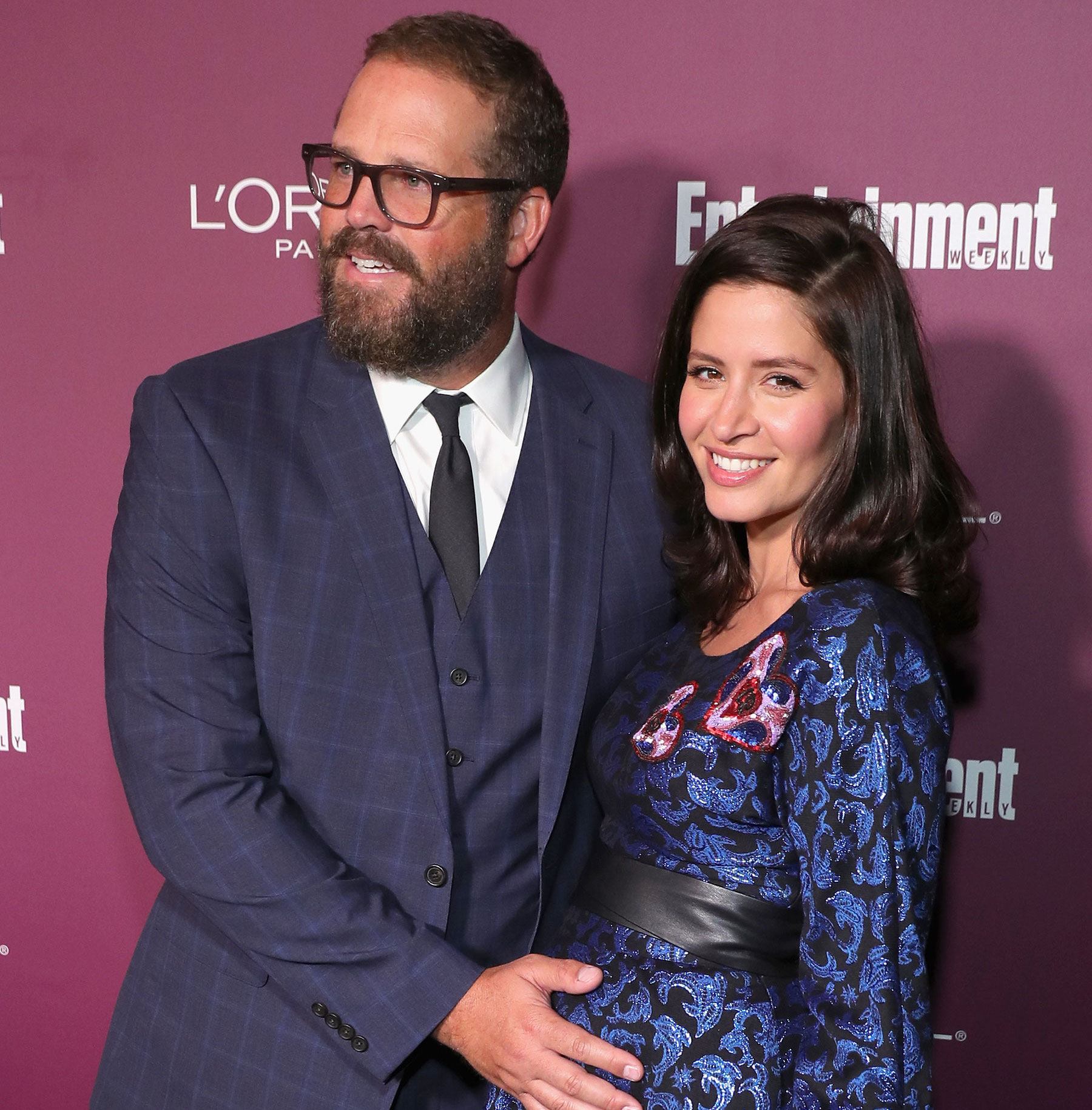 Denman and Mason are going to have a busy time on their hands at the moment because Mercedes gave birth to their son Caius in January 2018. Cute!

2. Will Ferrell and Viveca Paulin 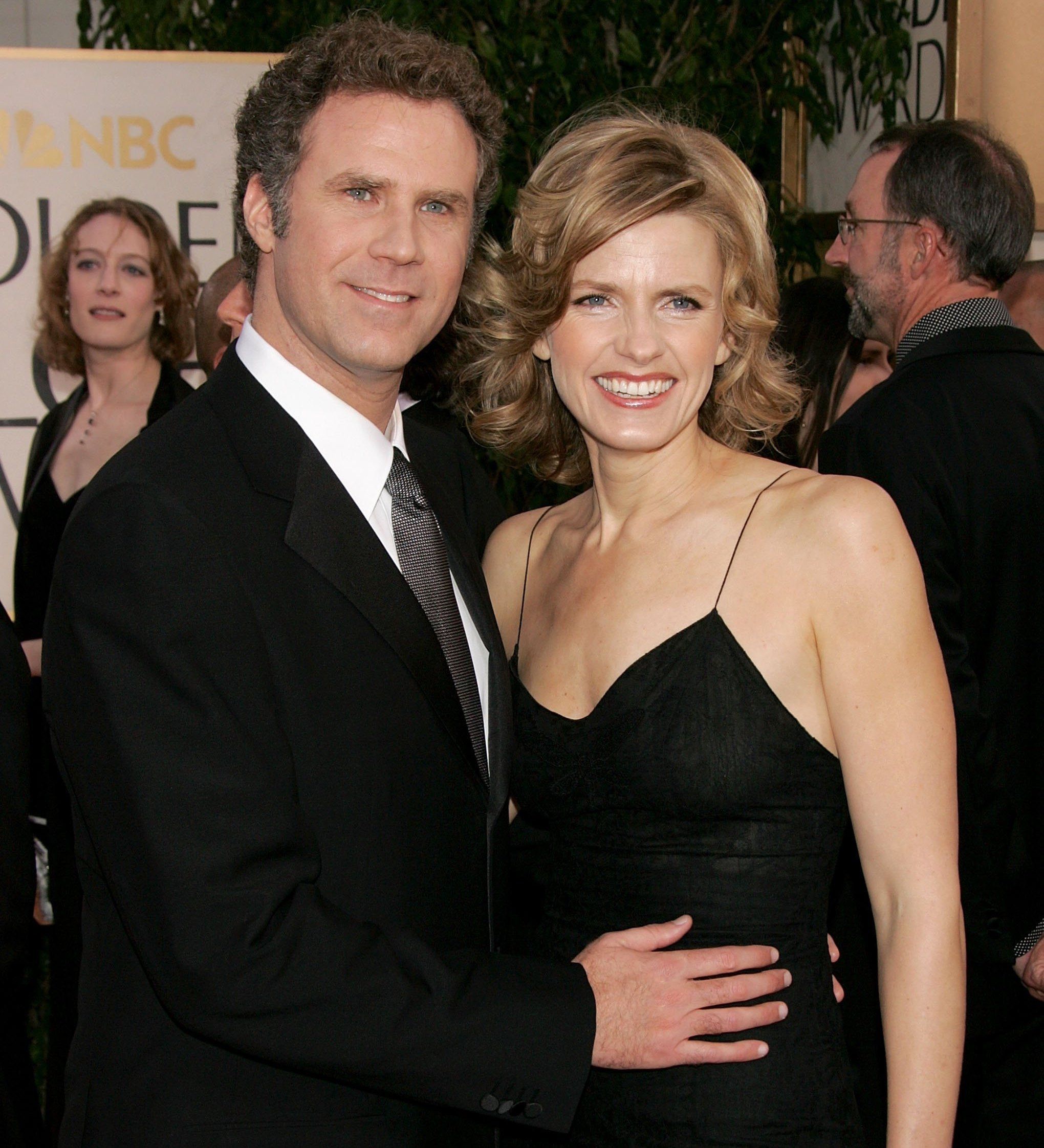 Comedy legend Will Ferrell had a brief spell on the show as Deangelo Vickers, lasting for four episodes shortly after the departure of Michael Scott.

Deangelo was a hilarious character and quickly became a fan favourite despite his brief run – sadly, he just wasn’t the right fit to head up Dunder Mifflin thanks to his blatant sexism and disastrous managing style.

In reality, things have fared a lot better for Ferrell, who has been happily married to his Swedish wife Viveca Paulin since 2000. 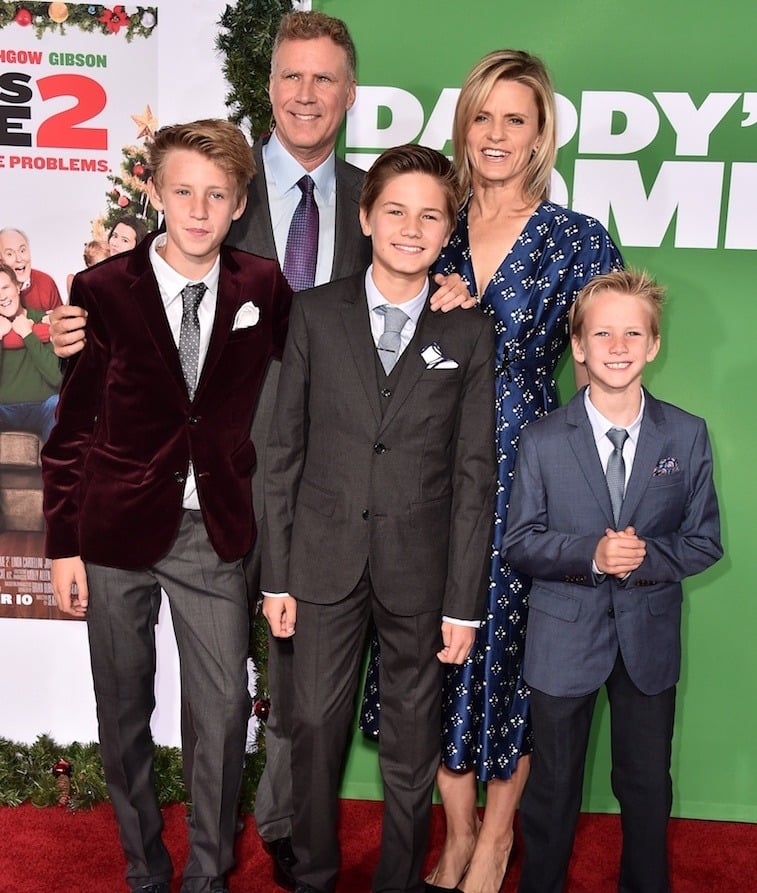 Ferrell can even speak a smattering of Swedish thanks to his wife, which he recently revealed on Jerry Seinfeld‘s Comedians in Cars Getting Coffee.

Ferrell and his family divide their time between New York City and Orange County, California. Now 52, Ferrell was last seen in Daddy’s Home 2 with Mark Wahlberg and heard in The Lego Movie 2 with Chris Pratt. 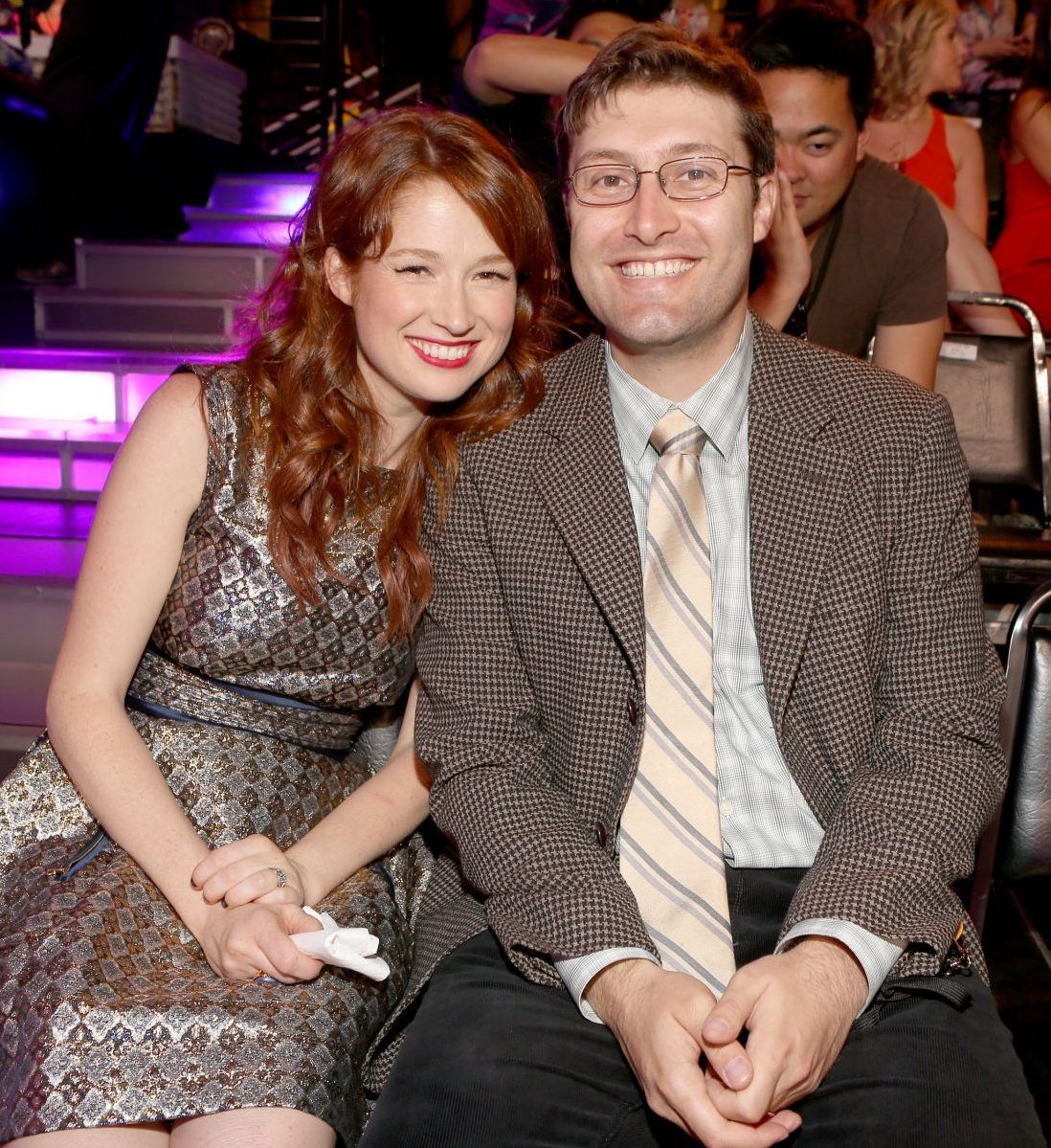 Ellie Kemper has had a runaway career since starring as Erin, the goofy receptionist in The Office, having gone on to star in her very own Netflix show: The Unbreakable Kimmy Schmidt.

But fans of the US mockumentary will always remember her as Erin, Andy’s long-time love interest.

Erin and Andy had a strange relationship on the show – it was often awkward and neither character ever seemed to be in the right place at the right time.

Fortunately, Ellie doesn’t have the same relationship troubles in real life because she’s been happily married to Michael Koman since 2012. 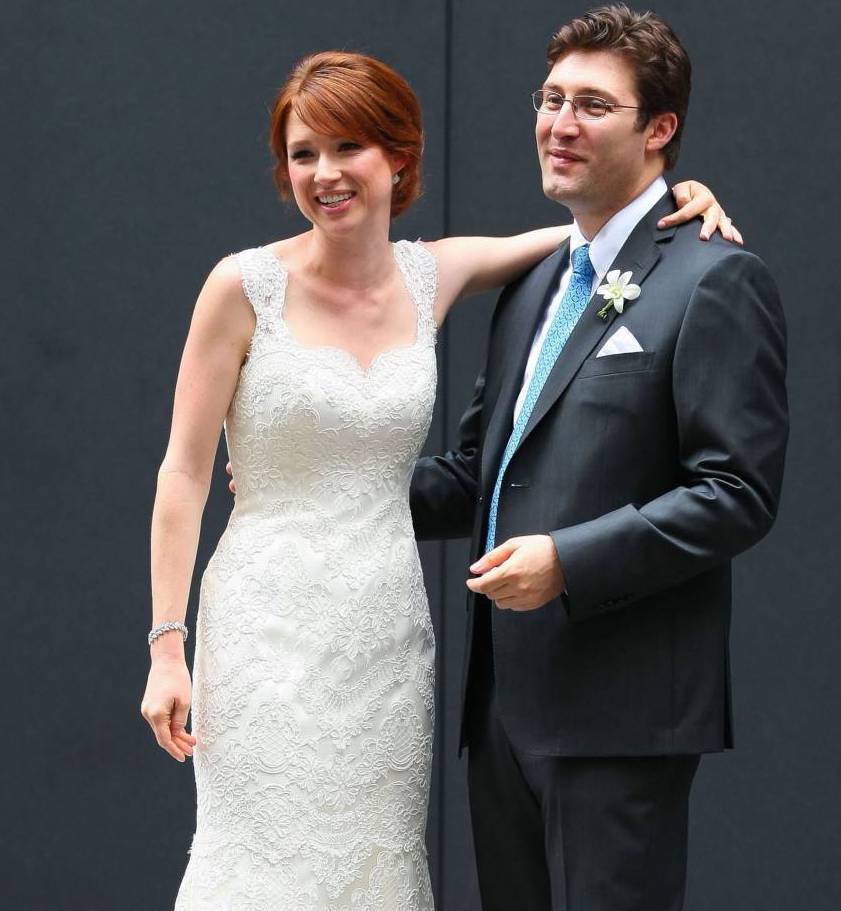 Koman is Jewish whilst Kemper is Catholic, an issue which she joked finally came to a head when they were deciding how to baptise their son, James (born 2016).

They went down the Catholic route in the end, but according to an interview with Stephen Colbert, their son screamed the entire way through the service! A sign from God?