With a library of over 388 games released over just six years, the Nintendo 64 has become one of the most popular and recognised video game consoles of all time. Funnily enough, though, of all Nintendo’s offerings, the N64 sold the fewest games per console.

It relied on plastic ROM cartridges known as Game Paks which, while outmoded today, are held in high esteem and affection by many collectors. Take a look below to discover which Nintendo 64 games reach the highest prices in the current vintage game market. 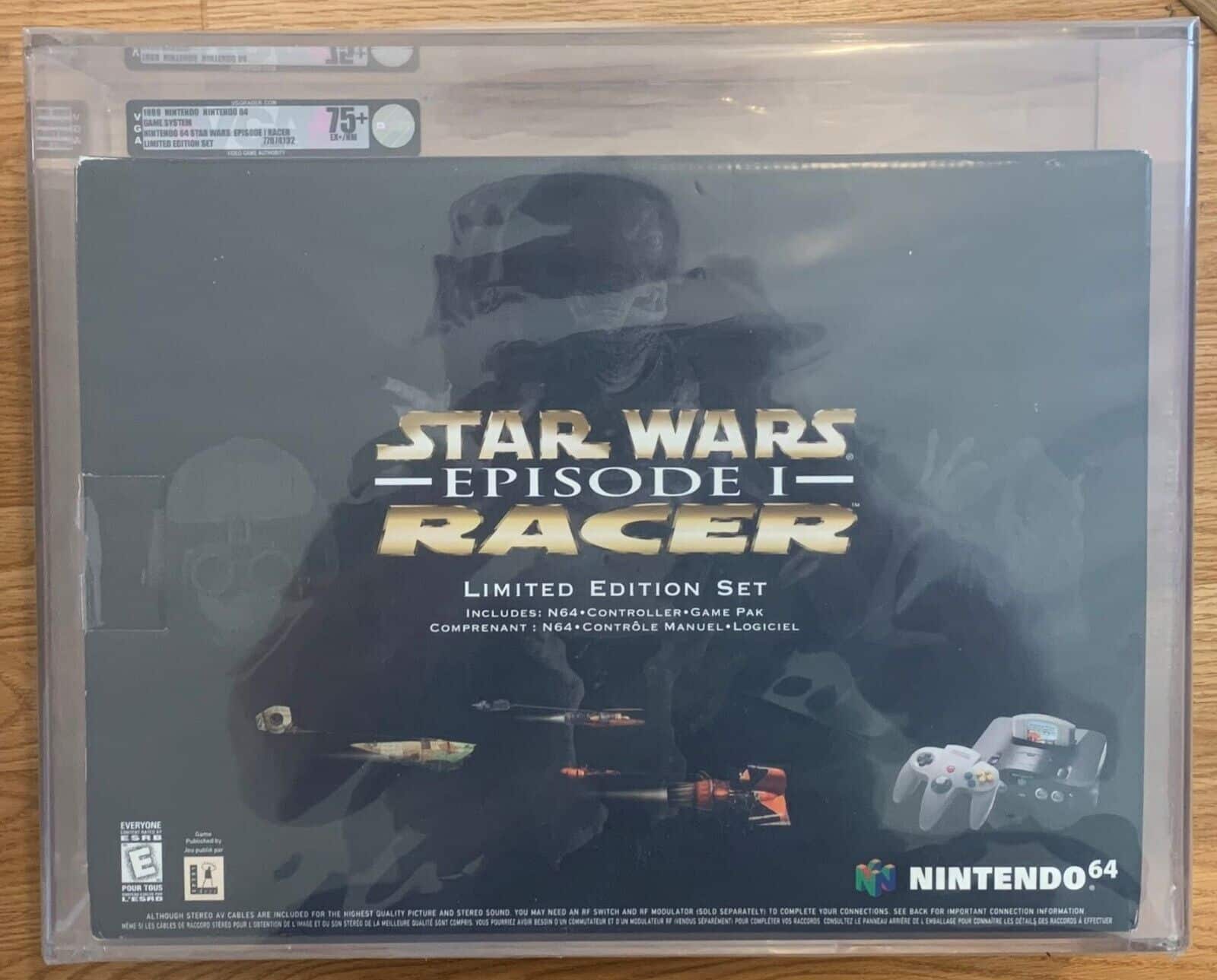 Based on the Tatooine podracing scenes from Star Wars: Episode I: The Phantom Menace, this game includes race courses on various planets and offers single and multiplayer modes. Actors Jake Lloyd and Lewis MacLeod reprised their Star Wars roles to feature in this 1999 game.

One listing for this game on eBay.com came from a seller based in Niagara Falls, New York. “The tape has lifted one of the sides while in the holder,” they noted. “The box has never been opened.” After attracting 41 bids, it sold for $1,650 in September 2022. 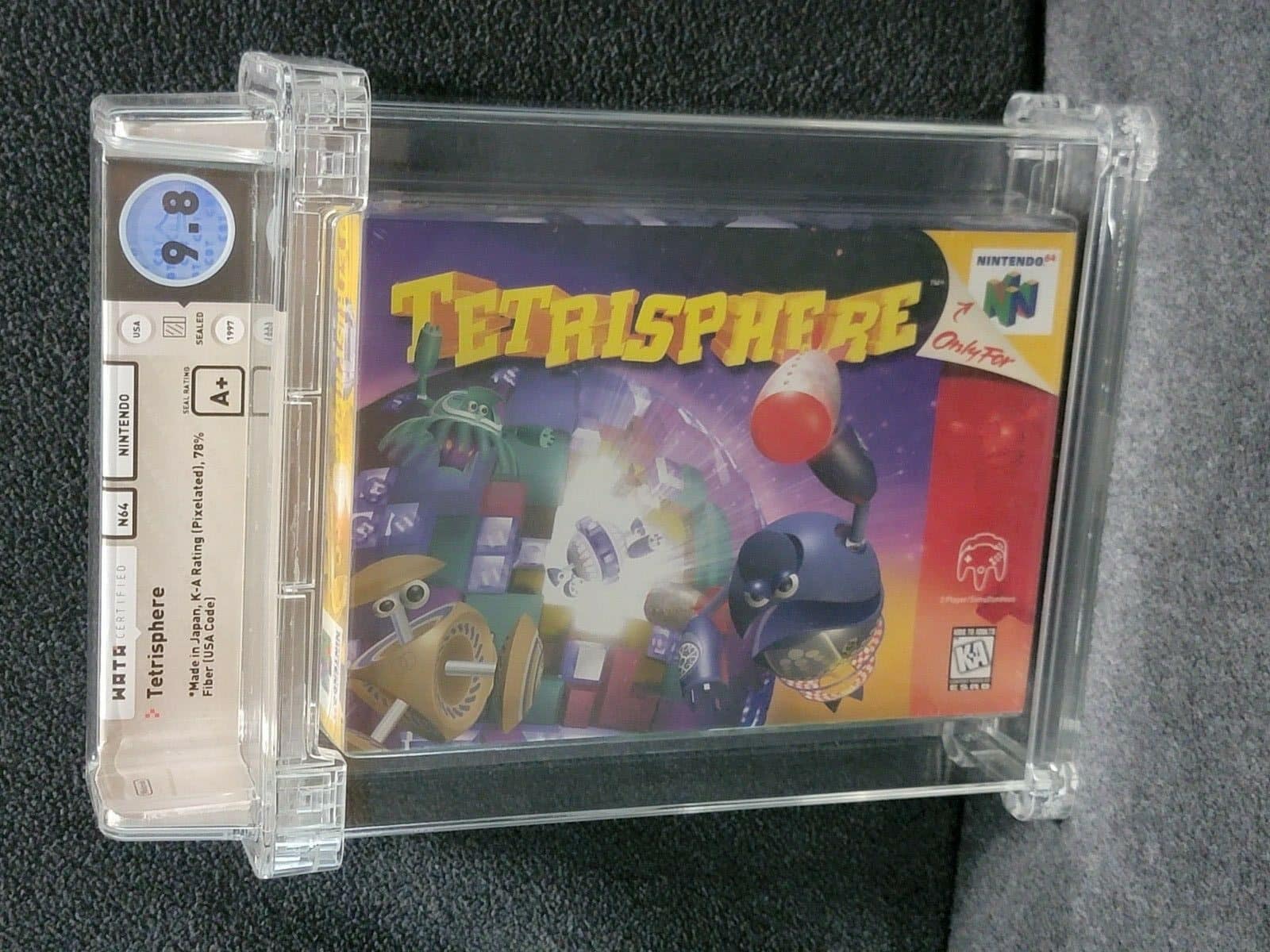 Tetrisphere is the only game on this list to focus solely on puzzle-solving. It was released in 1997 and was originally named Phear. A brand new copy of this popular game sold for $1,700 in August 2022.

The seller, jonebone7, is based in Prince Frederick, Maryland and boasts 5214 reviews. “Classic title from the Tetris franchise in nearly perfect shape with a 9.8 box and A+ seal,” they wrote. “Beautiful copy from a key franchise and perfect for any collector of sealed games!” 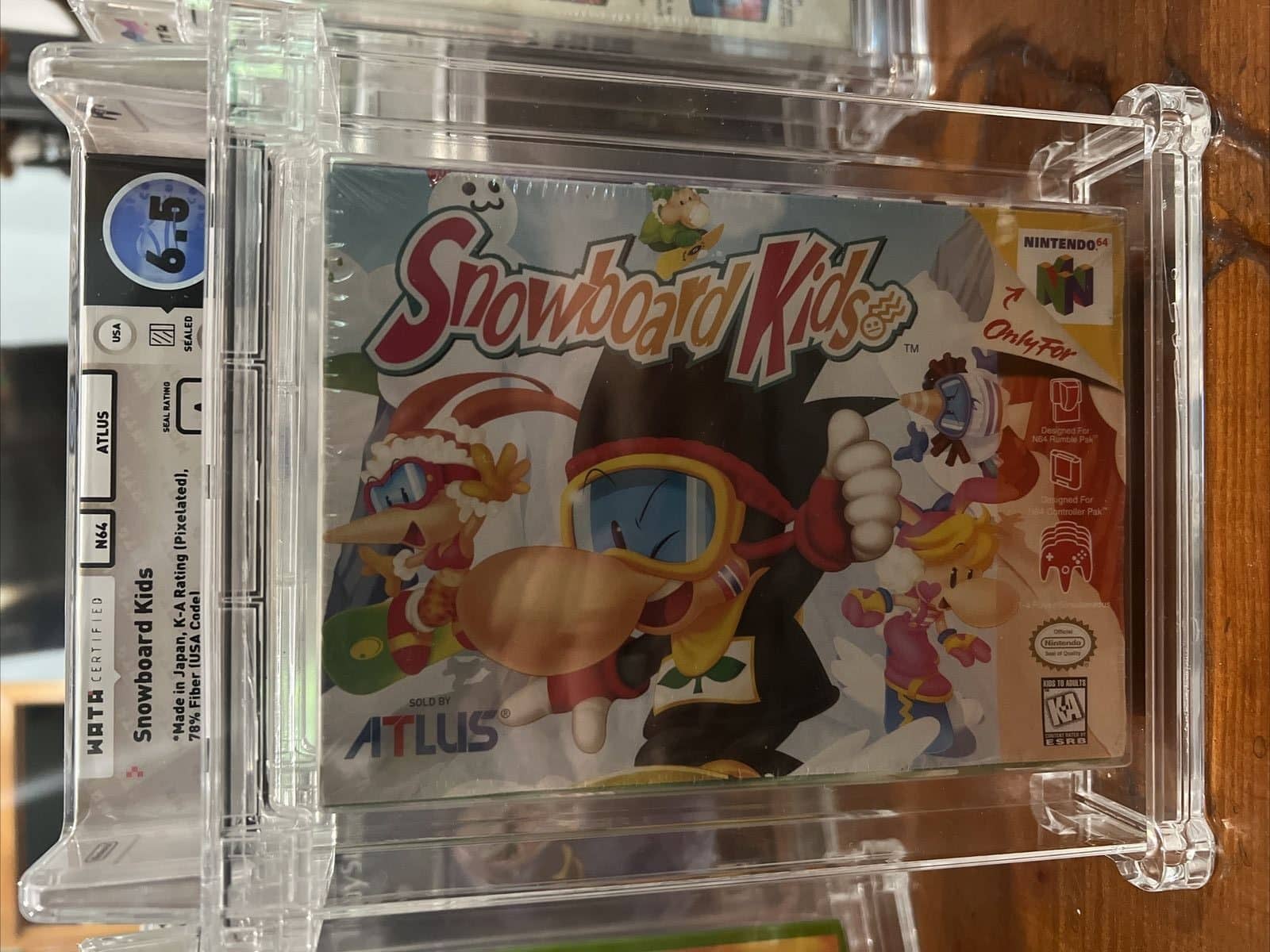 Snowboard Kids came out in 1997 and was designed by Japanese company Racdym. It has been compared to the Mario Kart series for its exciting racing format.

In July 2022, one copy of Snowboard Kids sold for $1,730 on eBay.com. The seller from Woodbury, Connecticut pointed out that only five factory-sealed and WATA-graded copies exist. “Snowboard Kids puts the arcade action and power-ups of Mario Kart 64 in the environments of 1080 Snowboarding or Cool Boarders,” they summarized. 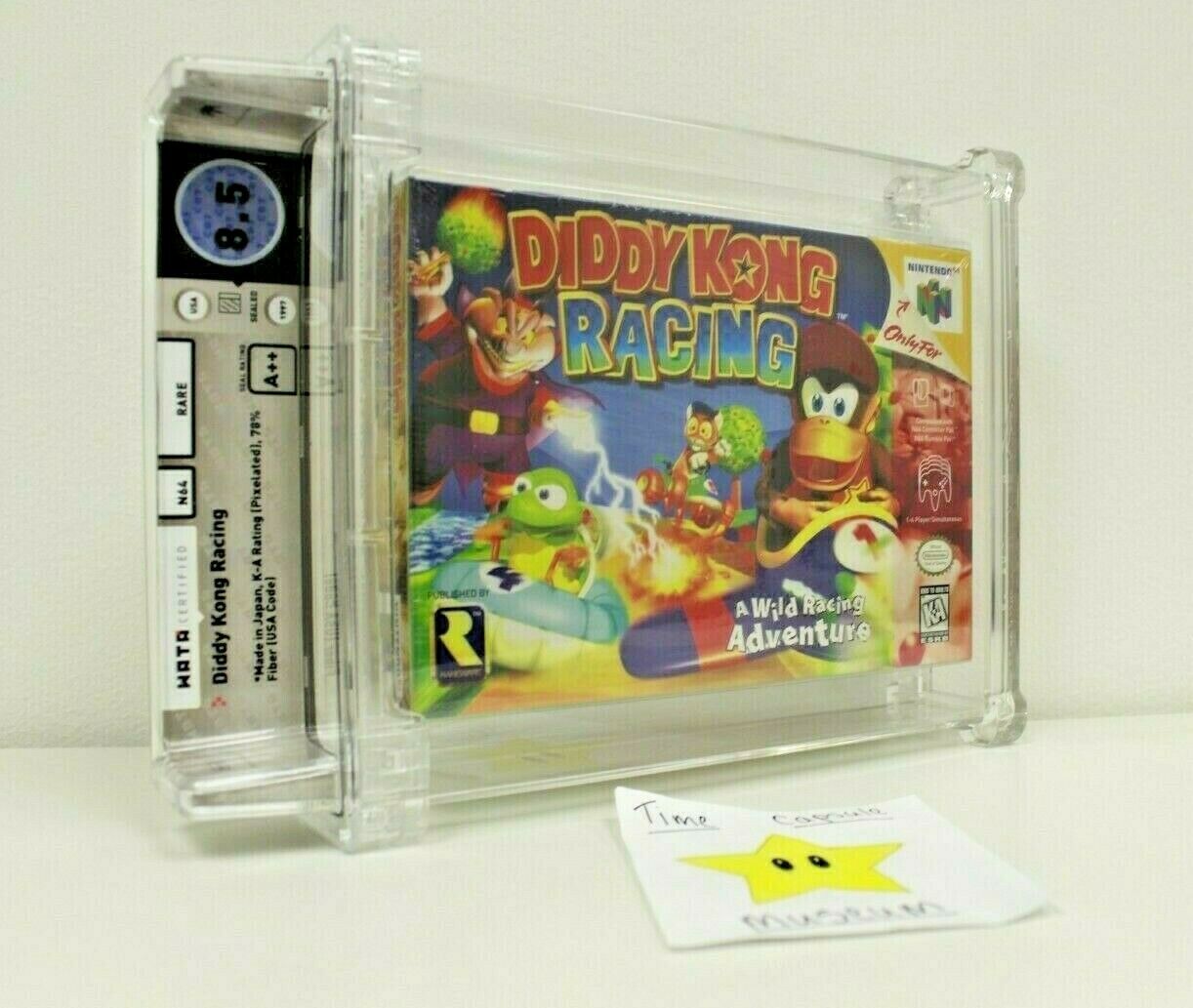 This 1997 multiplayer game shows Diddy Kong and friends battling against the evil magical pig Wizpig, with various races by car, hovercraft and plane. It was created for Nintendo by the British game developer Rare, which also made Banjo-Kazooie and GoldenEye 007.

One owner of this game, based in Severna Park, Maryland, managed to earn $1,800 for it on eBay.com in 2022. The copy was still factory-sealed and in mint condition. 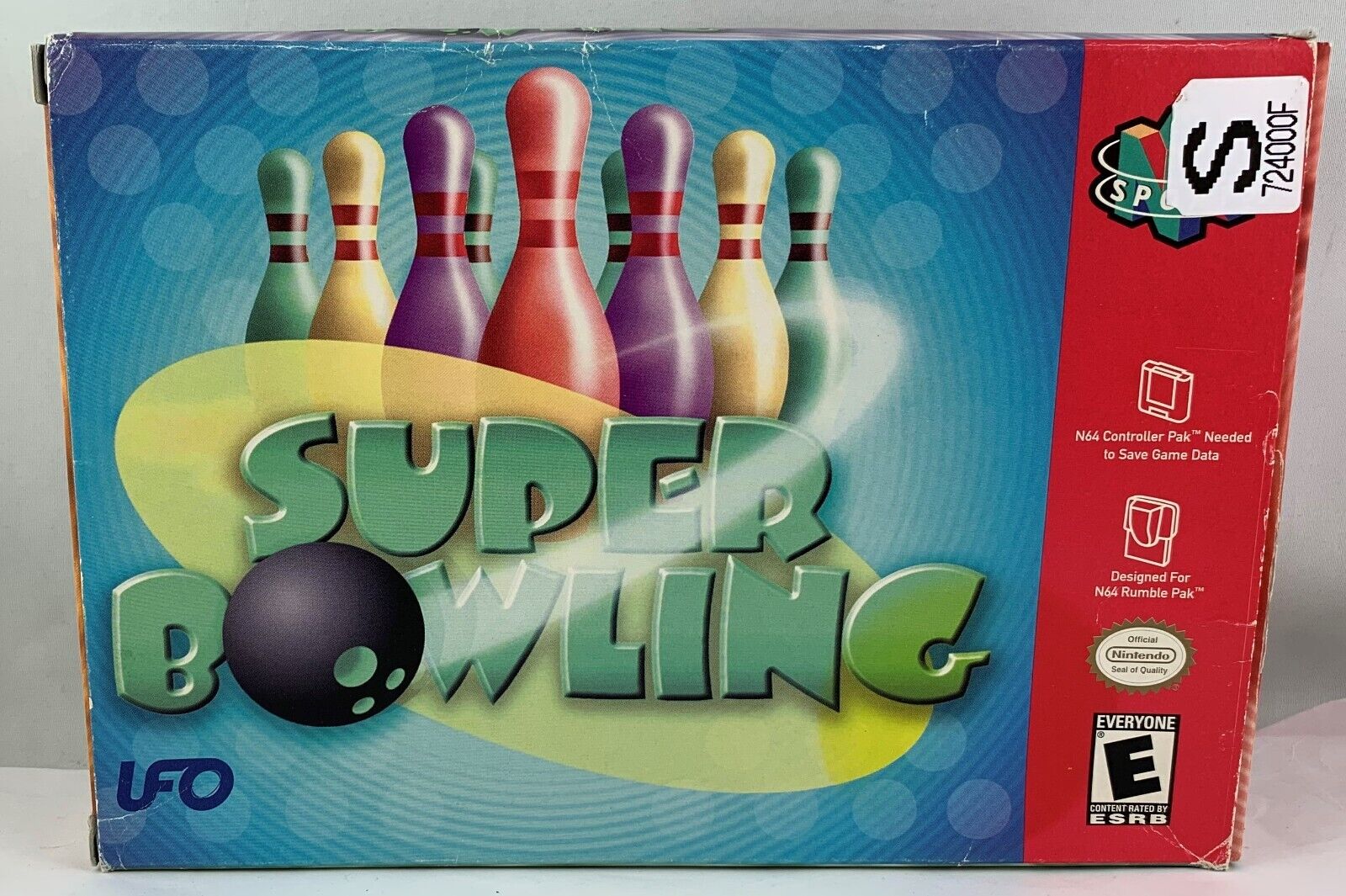 This bowling game allowed players to explore three modes: Golf, Normal and Practice. You could pick between four different opponents. Previously released for Super NES, it came out for Nintendo 64 in 1999. Due to its late timing in the N64 production cycle, surprisingly few copies were created, making this game particularly valuable.

“At least Super Bowl (for Super NES) has a sense of humour — an animated green chicken comments on the action, the on-screen players make funny faces when they throw gutter balls, and there’s a ‘golf ball’ option that lets you alleviate bowling’s inherent lack of excitement by assigning pars for different pin setups,” Entertainment Weekly noted. One copy in good working condition sold for $1,825 on eBay.com in September 2022. 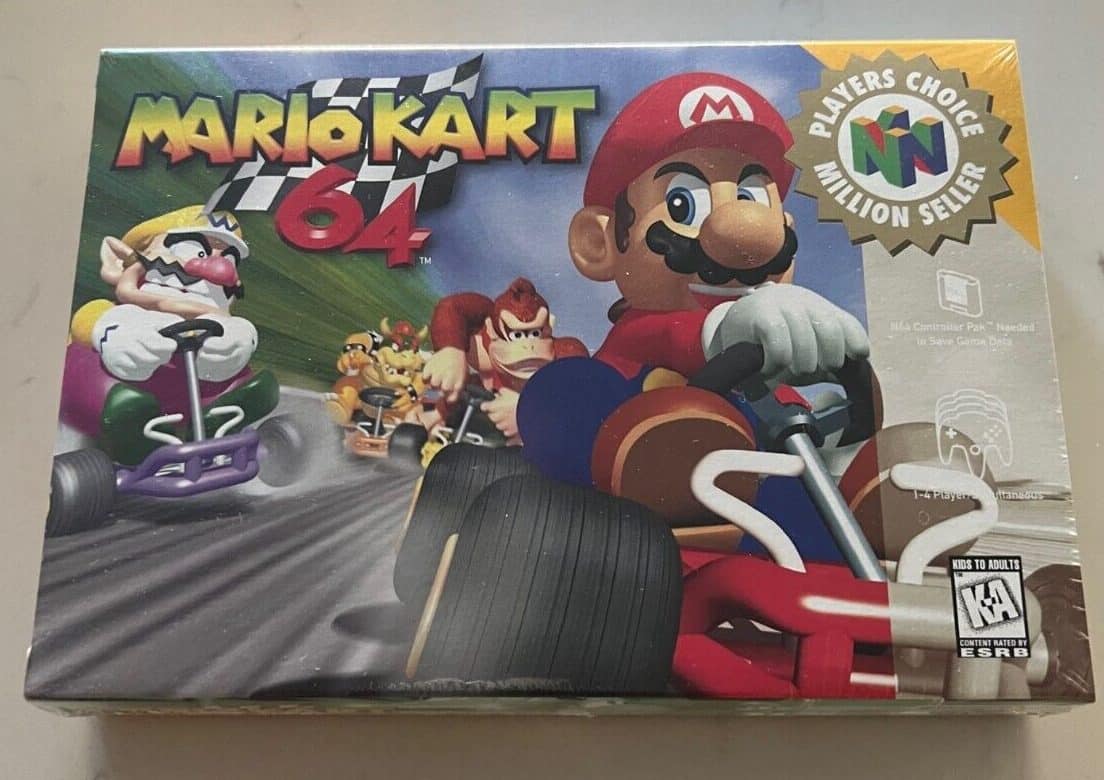 First released in Japan in December 1996, Mario Kart 64 reached stores in North America and Europe in 1997. It succeeded Super Mario Kart and introduced 3D graphics to its racetracks, though the characters and icons were still 2D sprites.

One copy attracted 30 bidders on eBay and sold for $2,134 in August 2022. “I’ve had several buyers ask whether or not these games are legitimately factory sealed,” the seller wrote. “I’m a long-time collector since the mid-1990s and I know how to detect resealed fakes. All the games I have listed are legitimate. I know how horrible is to pay top dollar for what you thought was a legitimately factory-sealed collector’s item only to receive it and find out it was a resealed fake.” 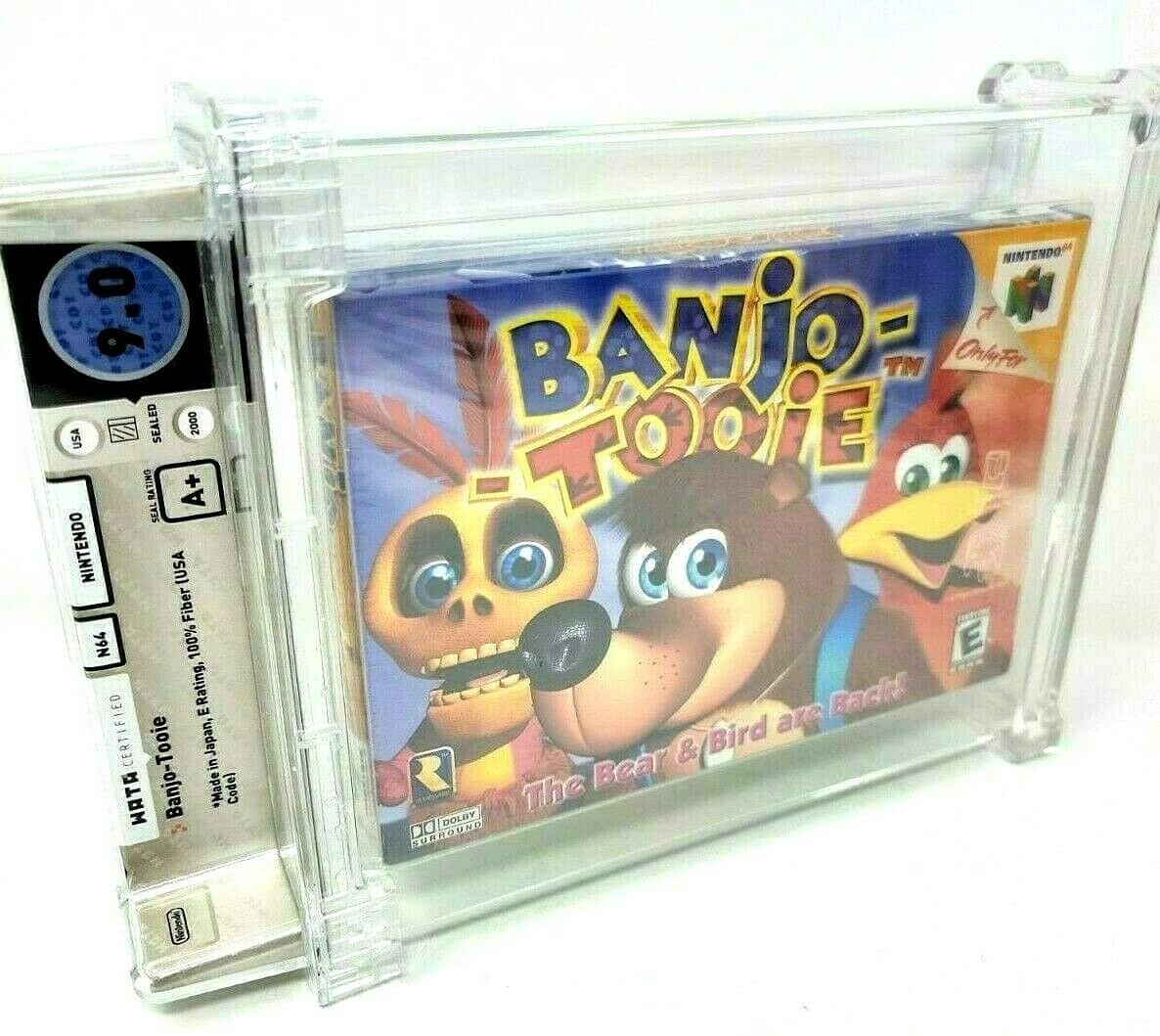 Banjo-Tooie is the sequel to Banjo-Kazooie, and it features extended worlds to explore and additional complex puzzles. It was popular among critics and fans alike when it was released in 2000, and today it can fetch considerable sums on eBay.com. One copy sold for $2,400 in July 2022.

The seller in question included the following product description on eBay: “Control Banjo and his best friend Kazooie through a 3D adventure in this Banjo Tooie Nintendo 64 game. This platform adventure has players traverse nine areas, battling bad guys and bosses throughout their way. Find collectibles to get bonuses that help you along the way.” 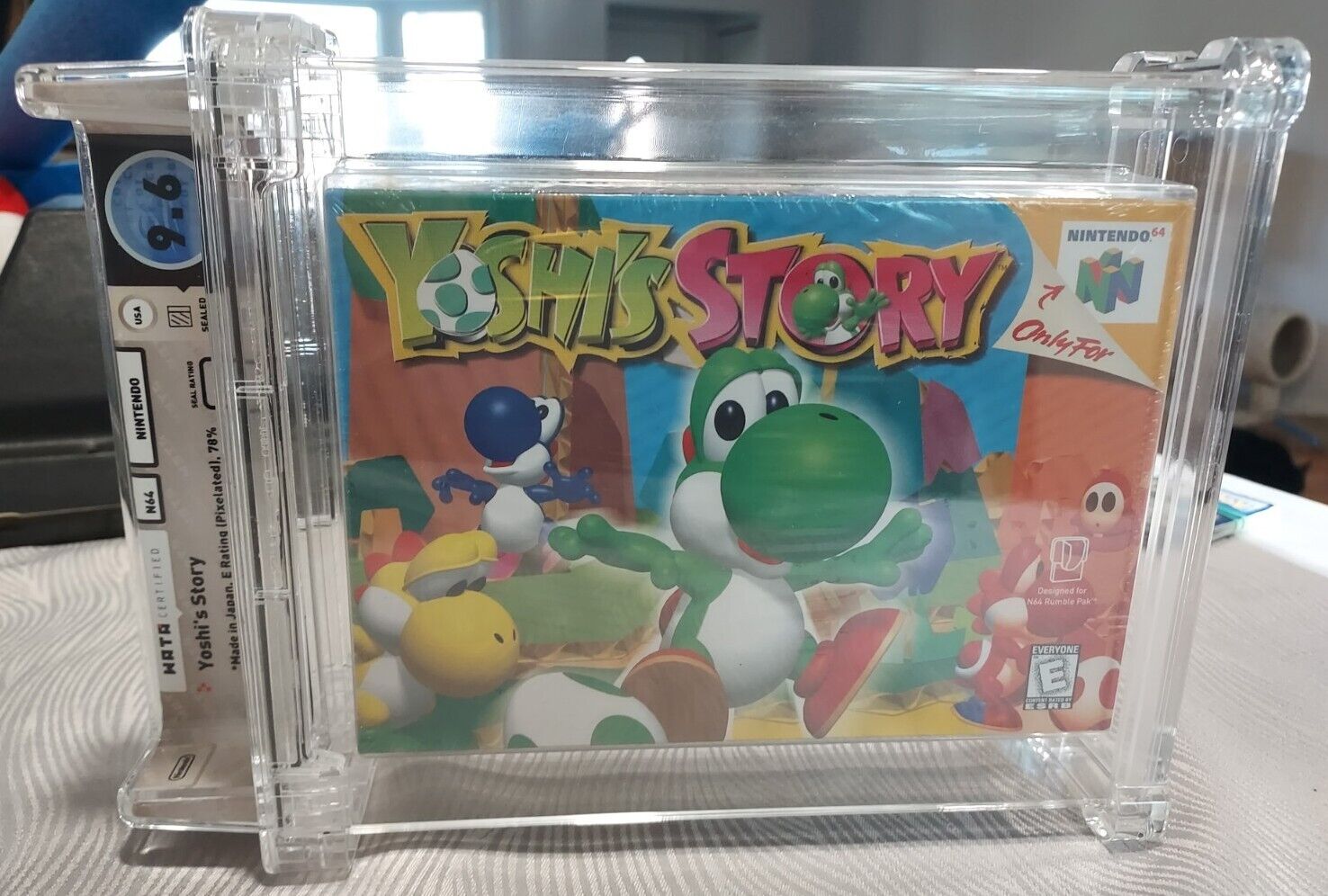 Yoshi’s Story, released in 1997, is a simple side-scrolling platform game – and this straightforward design attracted plenty of criticism. “Fans of the original Yoshi’s Island (one of the best platformers of all time) are going to be shaking their heads at the simplicity of this sequel,” reviewer John Ricciardi wrote. However, it was also praised for its impressive visuals, and it sold over 50,000 copies on its release date in Japan.

A factory-sealed copy of Yoshi’s Story N64 sold for $2,950 in July 2022. With a seller based in Brunswick, Ohio, this choice item attracted 18 bids on eBay.com. 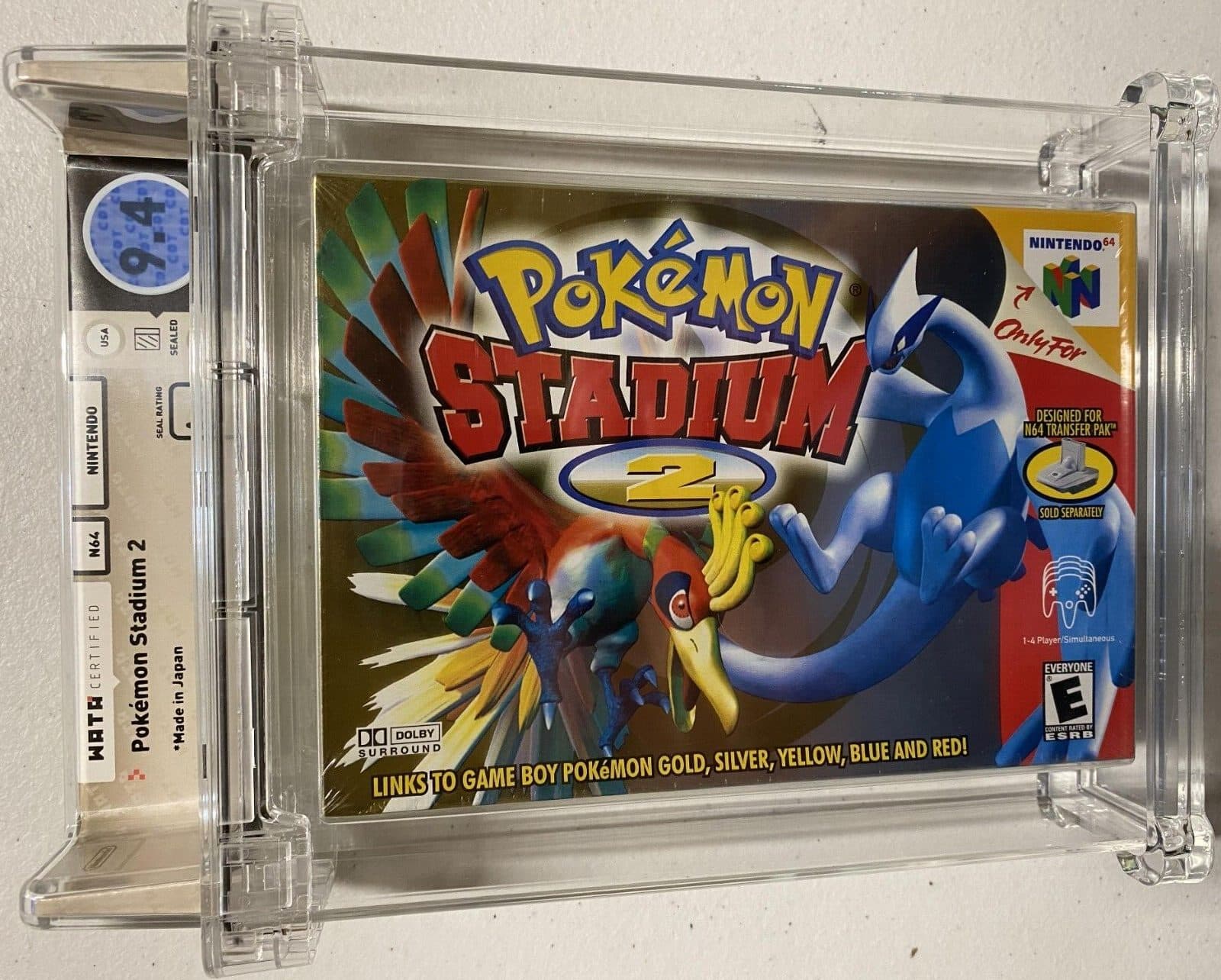 A sequel to the seminal Pokémon Stadium, which allowed trainers to see their precious partners battle it out in 3D for the very first time, Stadium 2 added compatibility with fan-favourite games Gold and Silver. That meant all 251 creatures could go claw-to-claw in new location White City.

In another factory-sealed, mint condition example, a copy of Pokémon Stadium 2 sold for $3,850 in August 2022. Sold in Hildebran, North Carolina, this item left other copies on eBay in the dust, which have sold in the realm of $270 – $1000. 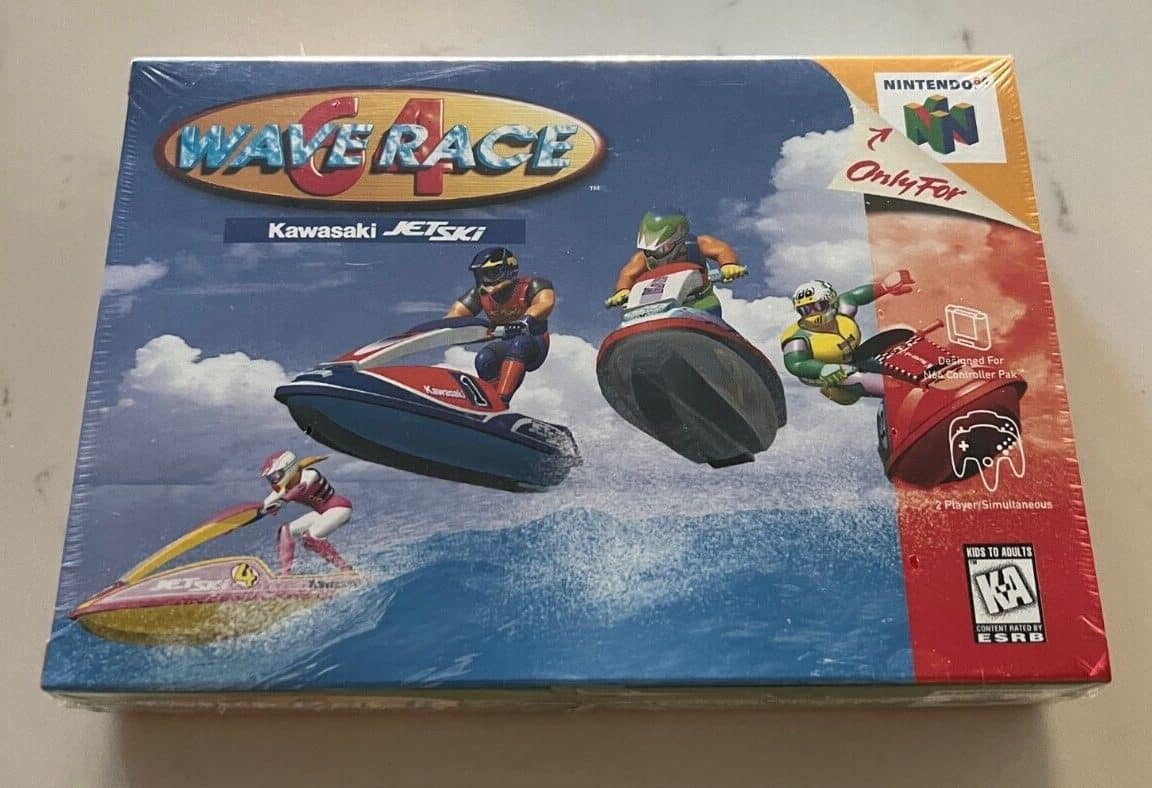 The sequel to Game Boy’s Wave Race, Wave Race 64 sets you on a watercraft to zoom around nautical obstacles. Released in 1996, it was a major commercial success, selling over a million units in the USA in its first year. “Wave Race 64‘s brash, bold presentation gives the game a light, arcade feel,” noted reviewer Jonti Davies.

“Indeed, everything about Wave Race 64 is cheery and positive, from the announcer’s hyperexcited cries of “You’re way out in front!” to the cheesy, Van Halen-sound of the distinctly ’80s theme tune,” Davies added. An American edition of Wave Race earned $4,350 after attracting 43 eBay bids in August 2022. 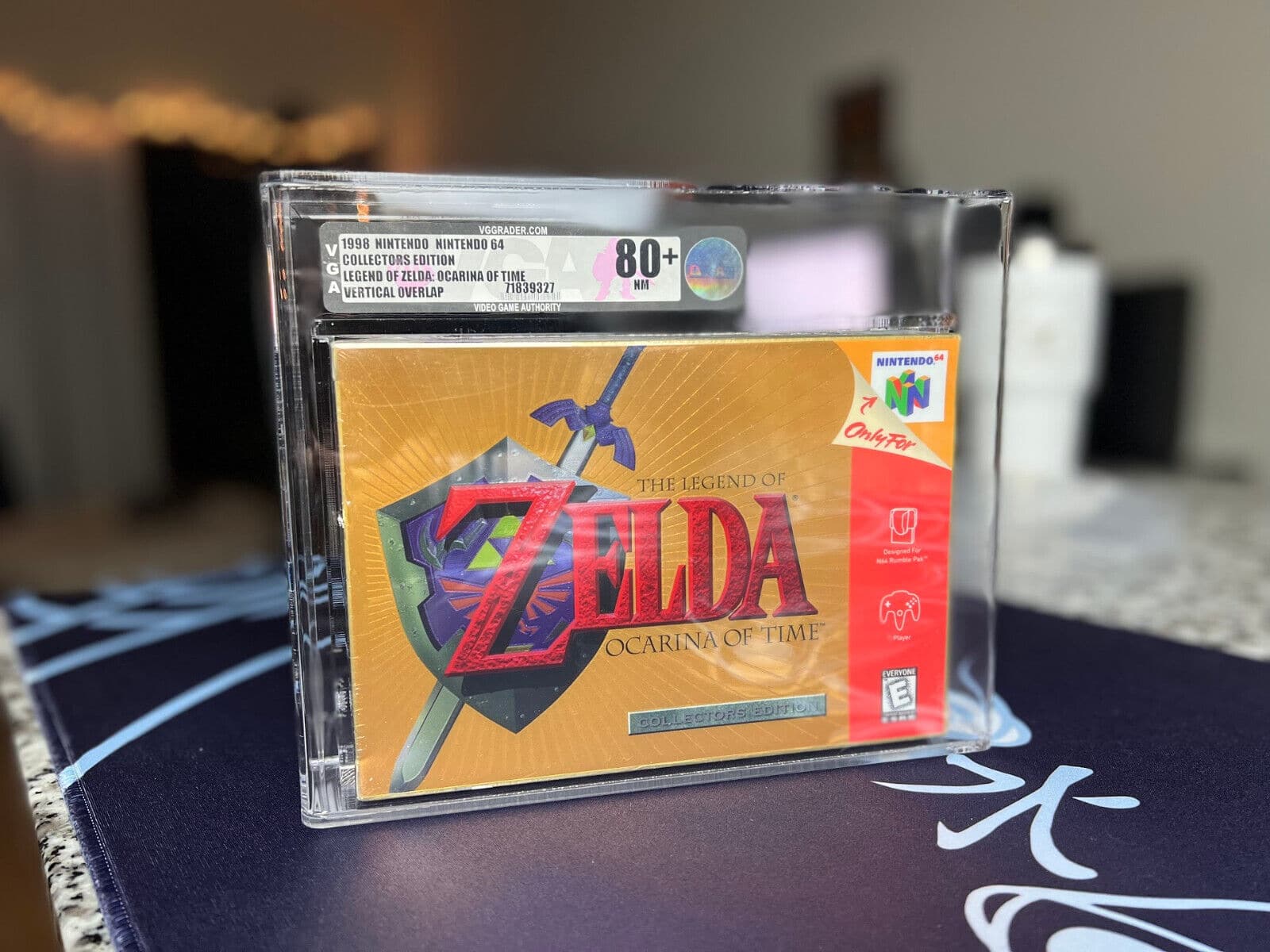 One of Nintendo’s best-known franchises, the Legend of Zelda franchise includes 29 games, published between 1986 and 2021. Ocarina of Time wowed fans with its sweeping landscapes, majestic soundtrack and exciting plot. Upon its release in 1998, it became the best-selling video game of the year.

One copy sold for $5,200 online in July 2022. It attracted a total of 69 bids. “A must-have addition to any N64 collection, this Collector‘s Edition cartridge features a unique gold-colored finish,” the seller, based in Palm Beach Gardens, Florida, noted. 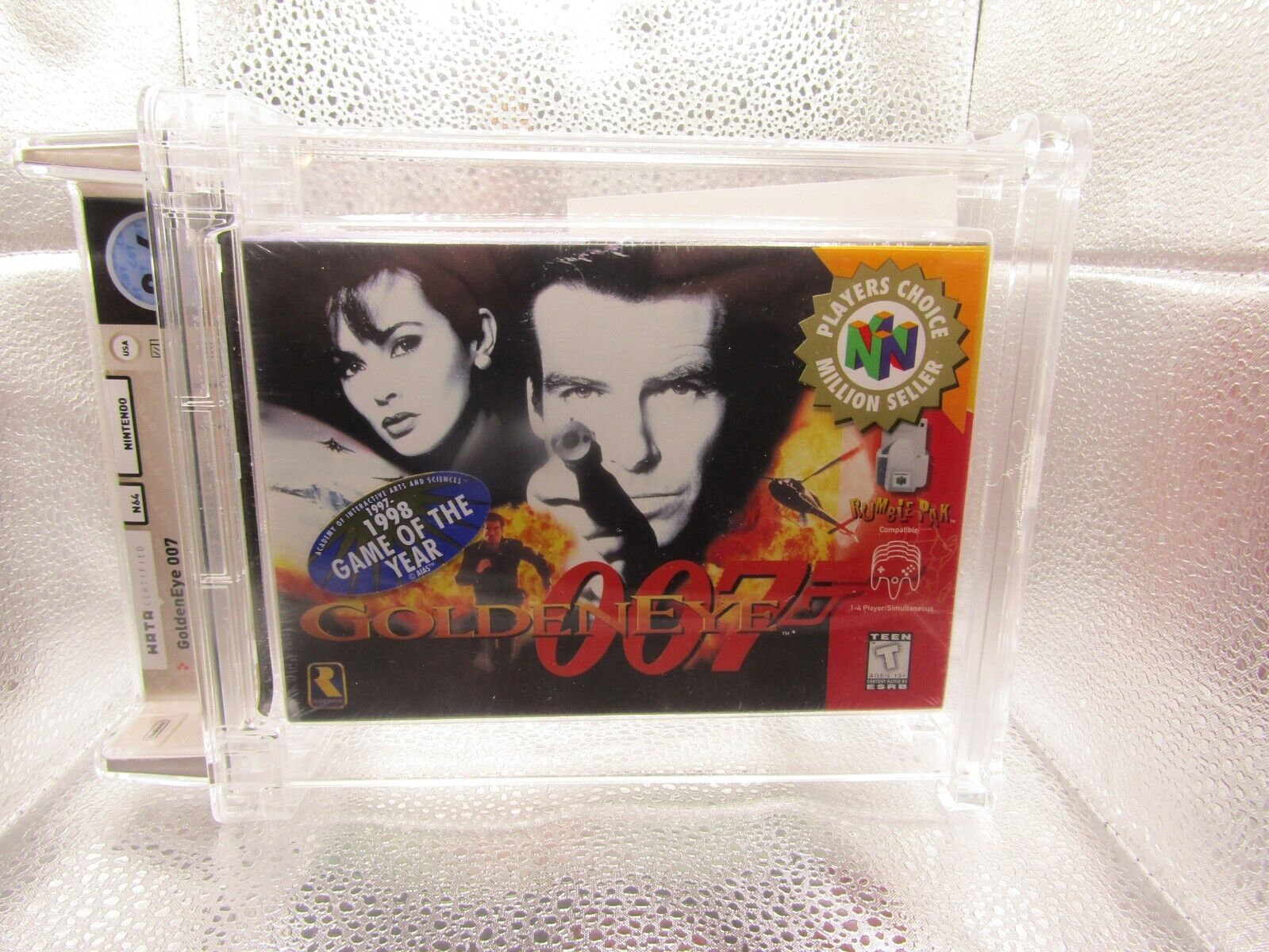 The 1995 Bond movie GoldenEye, starring Pierce Brosnan, was named after a real WW2 mission that Bond’s author Ian Fleming helmed. The movie has spawned various video games over the decades, including a 1995 Tiger Electronics title plus a cancelled Virtual Boy game. But it’s the N64 version that has become a video game legend.

The Academy of Interactive Arts and Sciences, founded in 1992 and still at work today, granted GoldenEye 007 its Game of the Year Award in 1998. One copy – with this Award sticker attached – earned $5,901 on eBay.com in August 2022. 34 bidders expressed their interest in this precious item. 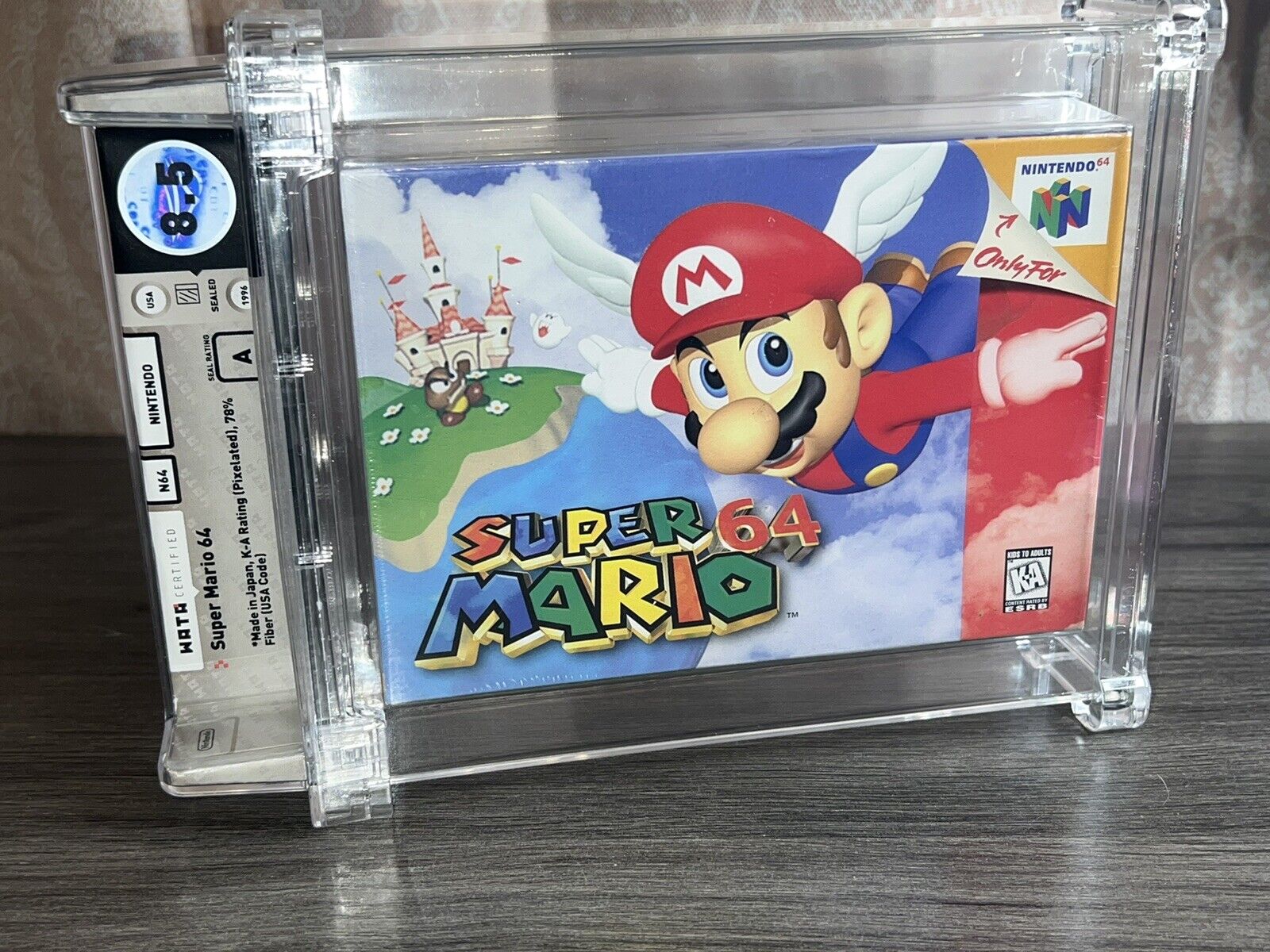 Released in 1996, this platform game is the best-selling Nintendo 64 offering, having sold over 12 million copies worldwide. Mario’s enduring popularity has helped this game sell for $7,100 on eBay.com, attracting an amazing 56 bids in July 2022.

“The well-traveled Mario embarks on his most visually striking adventure to date, one that finds the mustachioed plumber running, jumping, and flying across 3D realms for the first time,” the seller added to the product description. “While the storyline might not surprise veteran players — Princess Peach has been abducted yet again by Mario’s turtle-shelled nemesis, Bowser – the control scheme and play mechanics offer a new take on the best-selling platform series.” 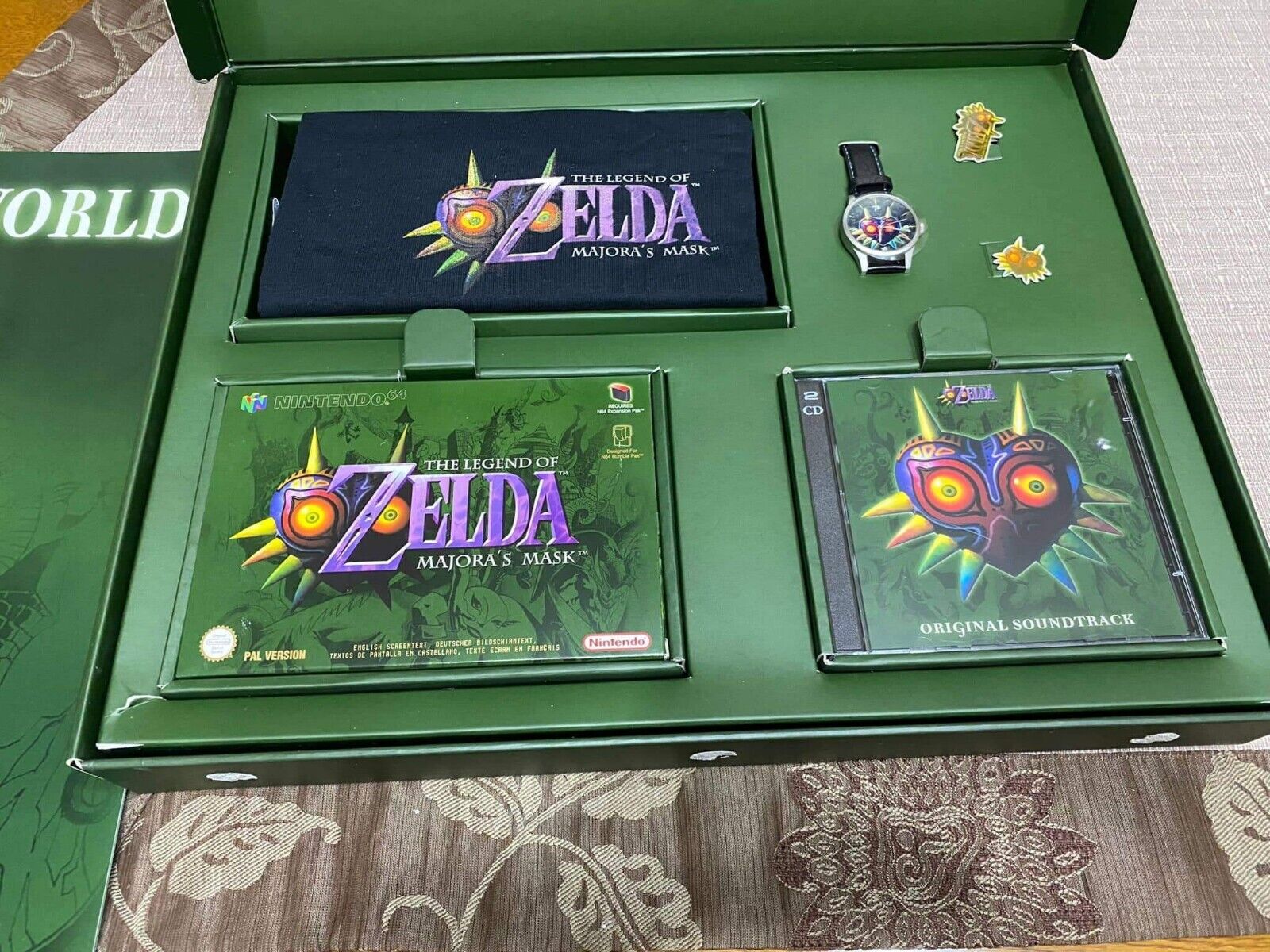 It’s one of the most beloved video games of all time – which explains why original Majora’s Mask copies sell for incredible prices online. Released in 2000, this action-adventure game was developed in under two years and is set two months after The Legend of Zelda: Ocarina of Time (see below).

In July 2022, a copy of this treasured game from Victoria, Australia fetched an impressive sum on eBay.com This set came with a T shirt, soundtrack CD and various pins and stickers. It sold for AU$12,599, which is approximately $8,676 in USD. Tracked shipping alone cost AU $200. “This item had a limited run of 1000,” the seller noted. “Each manufactured box set is individually numbered.” 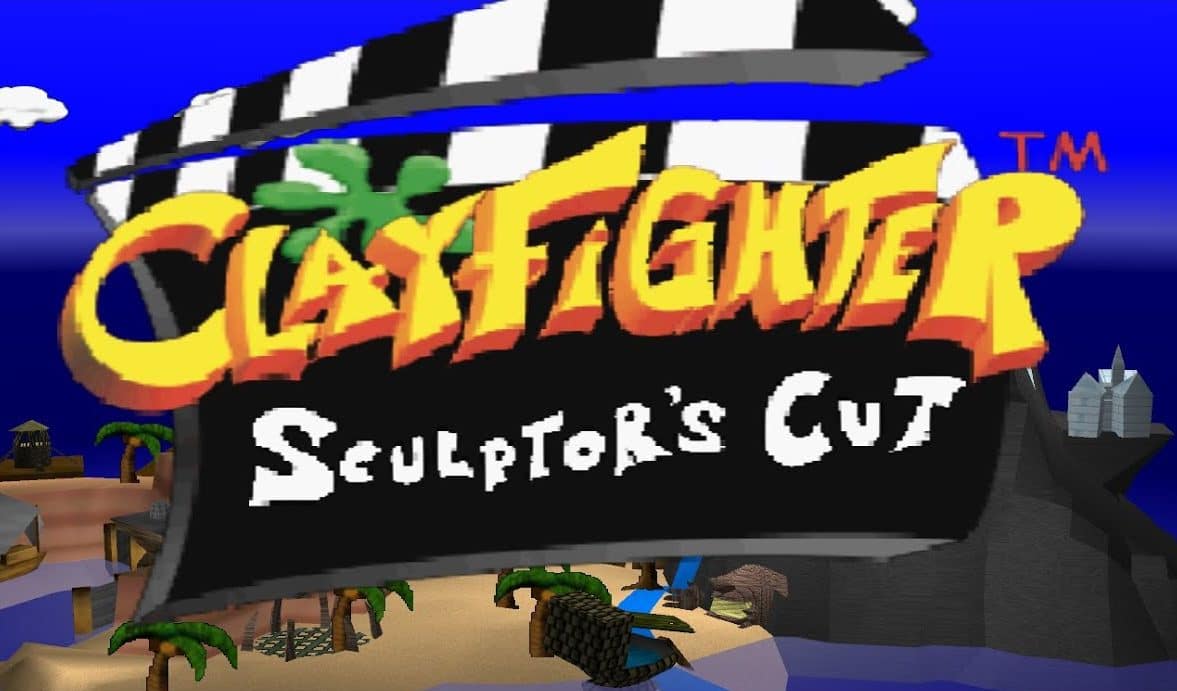 ClayFighter 63⅓ was one of Nintendo’s critical flops in 1997. As a result, when Blockbusters created an exclusive update named ClayFighter: Sculptor’s Cut in 1998, they went for a cautious, very limited distribution. It included four new characters who were missing from the original: High Five, Lady Liberty, Lockjaw Pooch, and Zappa Yow Yow Boyz.

Only released in North America, this Blockbusters special is arguably the most valuable Nintendo 64 game worldwide. According to Pricecharting.com, the game sold for a jaw-dropping $13,999.99 in May 2022.