What do you get when you cross one of cinema’s blockbuster franchises with a favourite toy of generations of children? Lego Star Wars of course! Originally just a range of popular crossover toys, the Lego Star Wars brand has become a franchise in its own right, with several video games and even a TV series.

Despite the brand’s ubiquity, there are some rare and very valuable Lego Star Wars sets out there on the resale market. Whether they’re huge buildable locations or teeny, tiny mini-figures, here are the Lego Star Wars toys fetching up to $5,700 at auction. 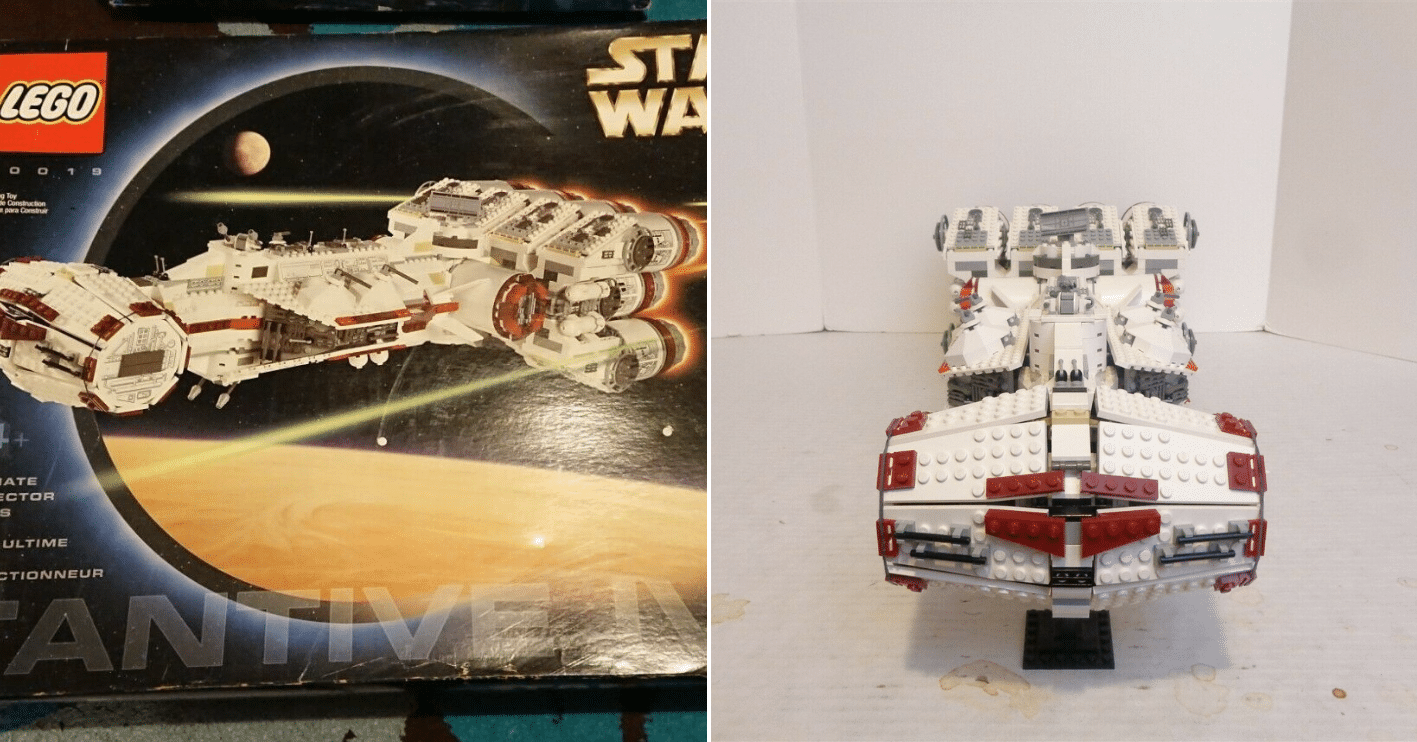 Princess Leia’s Corellian Corvette, the Tantive IV, might not be the Millennium Falcon, but it’s still a beloved vehicle amongst fans, as well as a prized possession amongst collectors. In 2001, the first Blockade Runner Lego build set was released as part of the Ultimate Collector Series, and included Leia’s favourite transport. 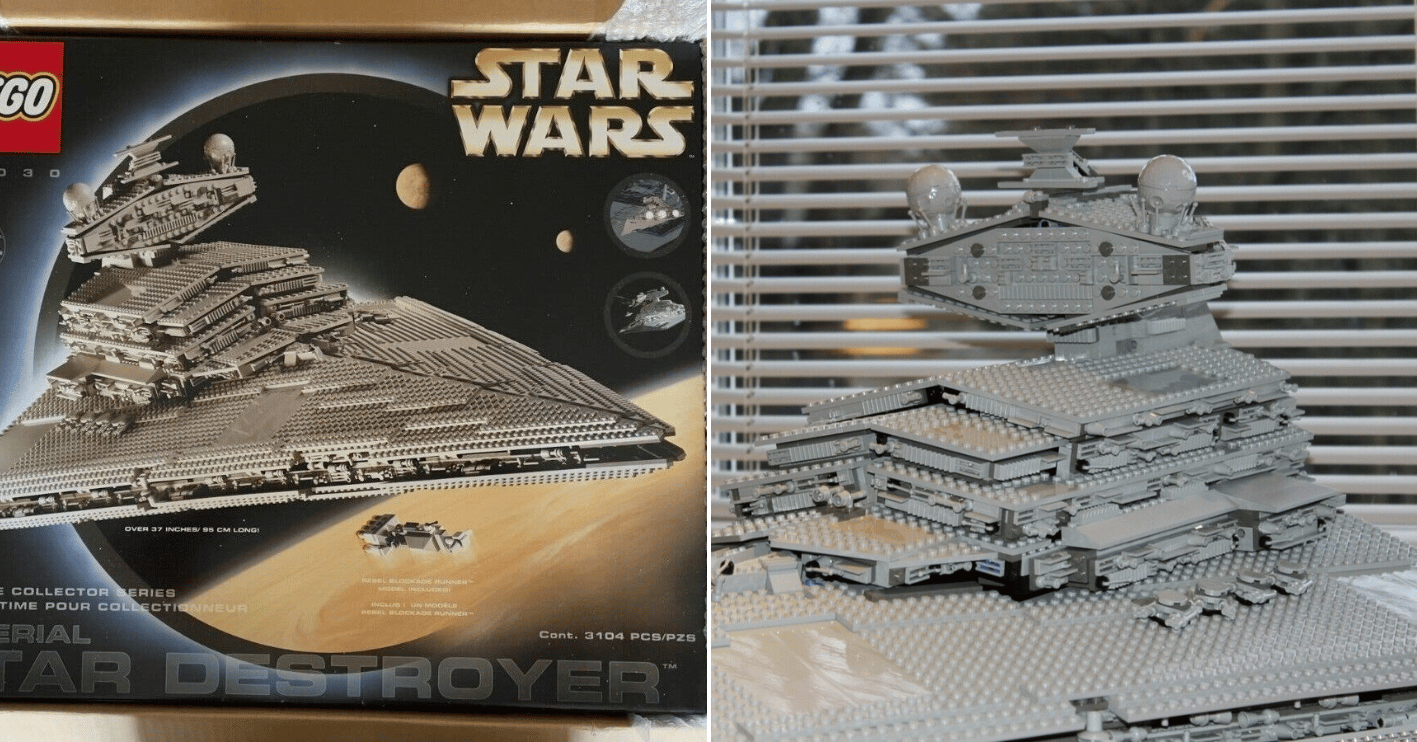 Several Lego sets depict the Imperial Star Destroyer, but the most valuable of them all is the 2002 Ultimate Collector Series version. Though it retailed for just $306, in the 20 years since its value on the resale market has ballooned by 462%, and is still increasing by 8.5% year on year.

That means that if you want to purchase one of the original Lego Star Destroyers today, then you can expect to pay $1,727. Top tip: later incarnations of this toy included blue-grey pieces in addition to true grey ones, which makes it easier to spot when a later edition is being passed off as an original. 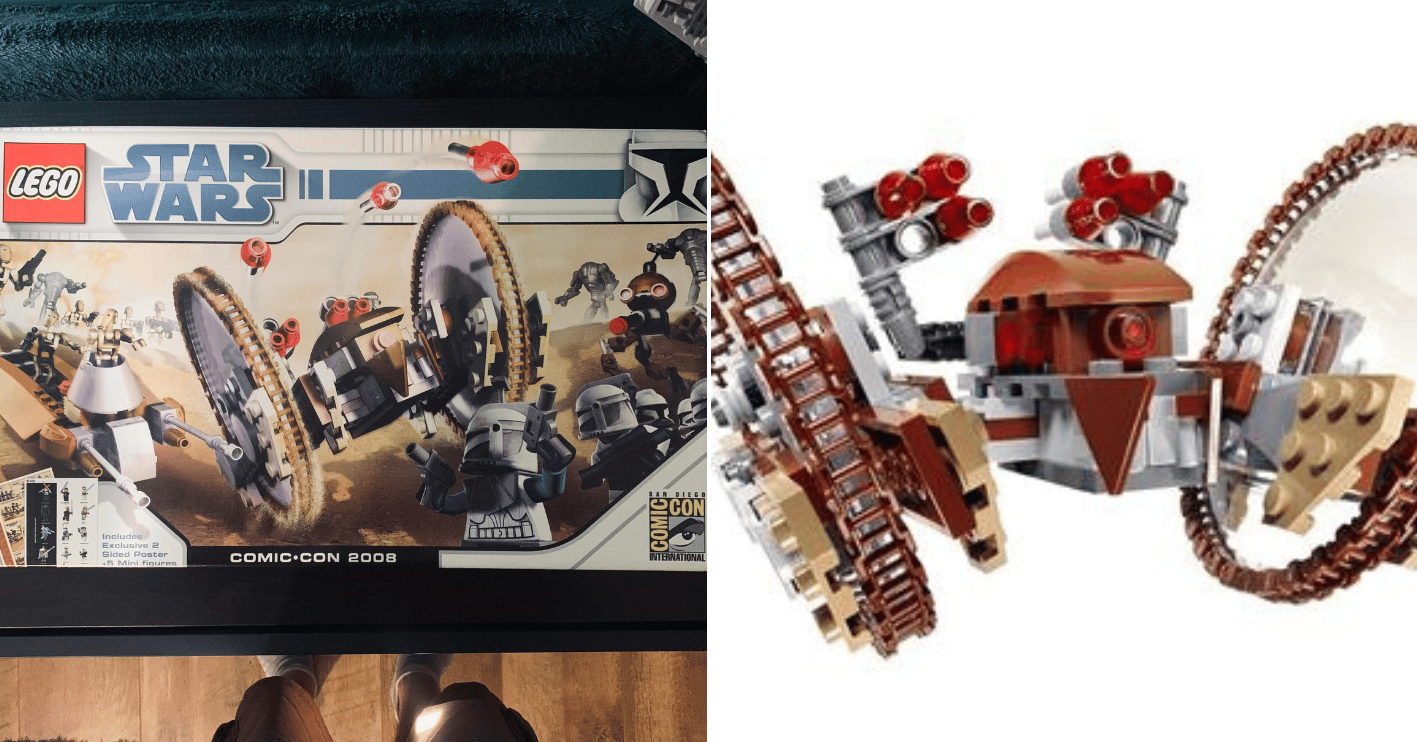 This 2008 San Diego Comic-Con exclusive build kit is one of the most recent Lego sets to be worth the big bucks on the resale market. The set was exclusively made available to purchase amongst raffle winners at the 2008 convention, resulting in just 1,200 copies being made.

The 2008 Comic-Con Clone Wars set never officially hit shelves, but its retail value was estimated to be around $73. That makes its current value, which sits around $1,904, a pretty significant step up. Its value is estimated to grow another 19% in the next 12 months too, so it’s worth buying now if you can get your hands on one. 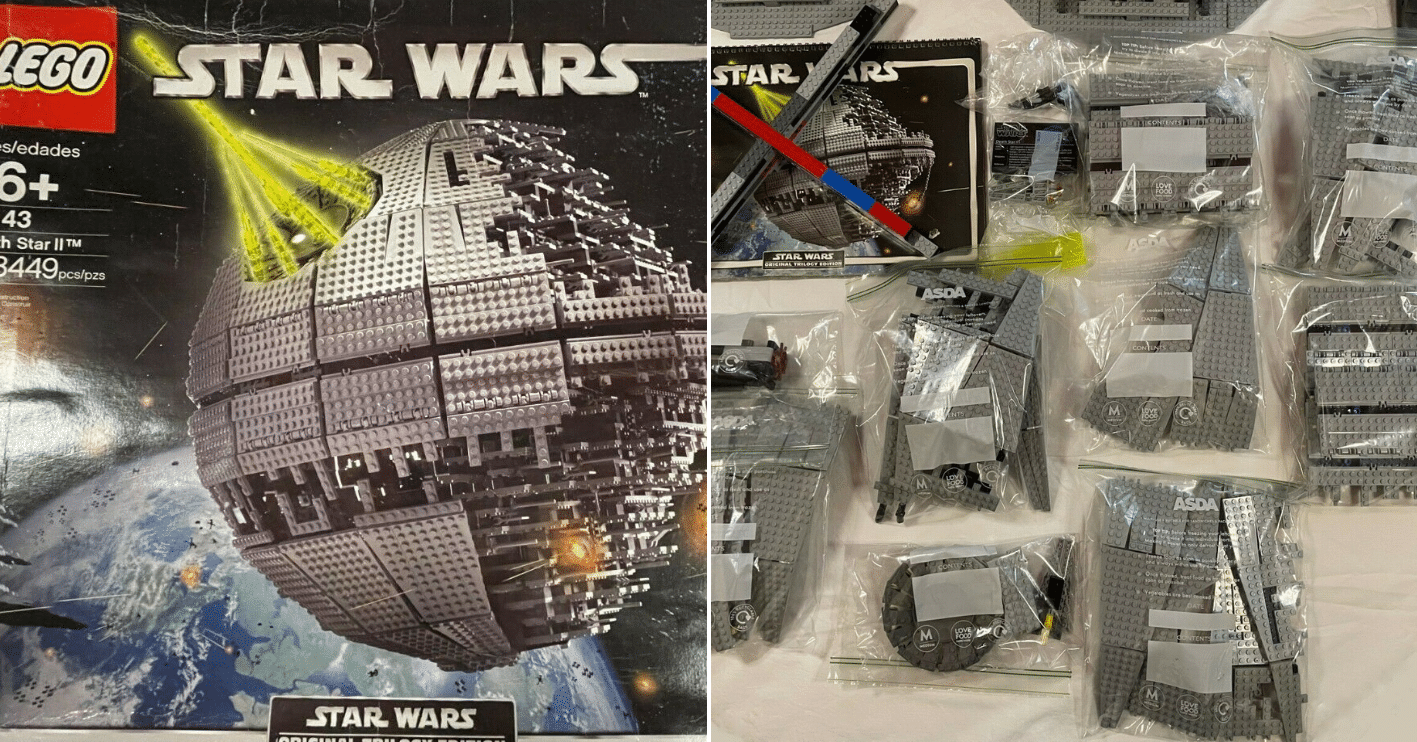 From the release of the original trilogy up to today, the Death Star has remained one of the most iconic images from the franchise, so it’s no surprise that rare Lego Death Stars have a tendency to sell for high prices on the resale market.

The 2005 Lego Death Star II is moderately complicated with just over 3,000 pieces, and it originally retailed for $306, making it a prestige Lego toy even when it was first available to buy. Nowadays it is worth $1,707, having shot up in value by over 460% in 17 years. 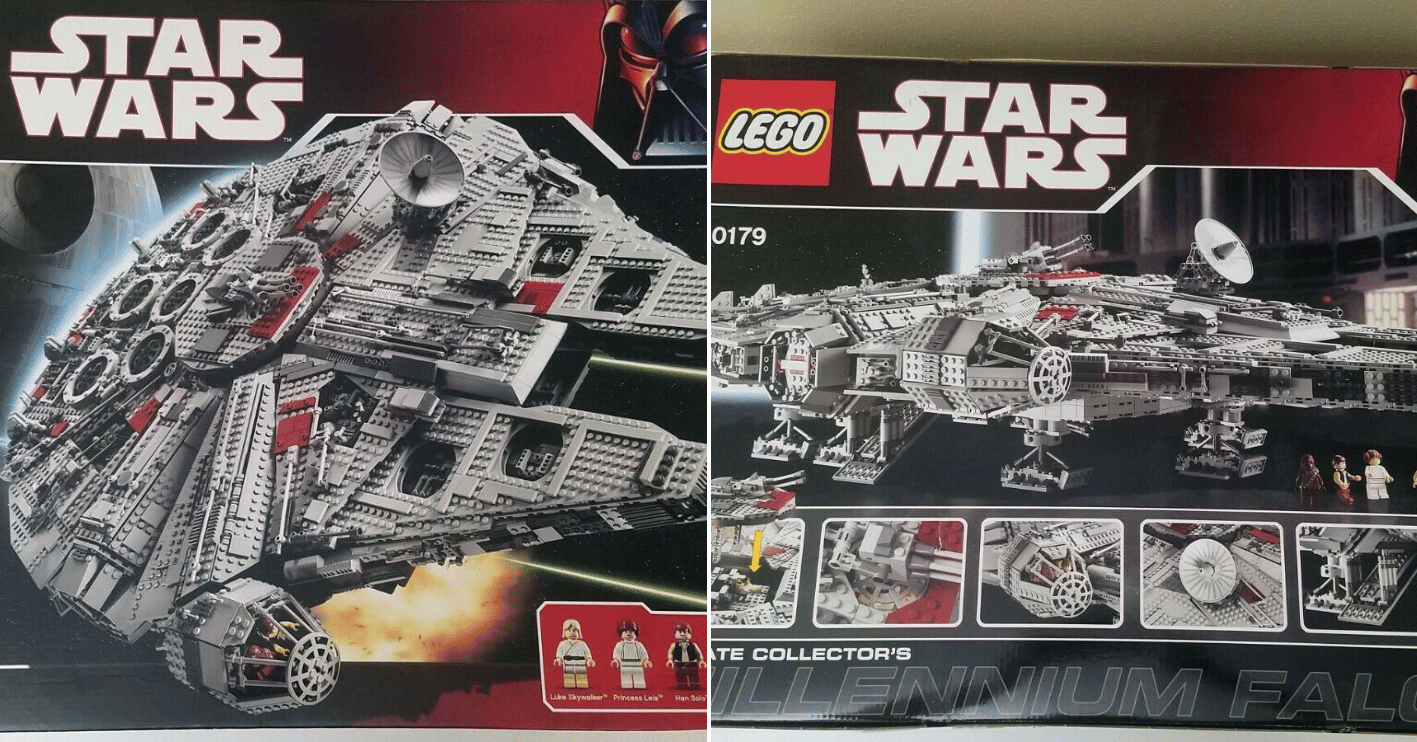 Star Wars is full of timeless iconography, but none light up the nostalgia centres of the brain quite like the Millennium Falcon. When it was released in 2007, the Ultimate Collector’s Series Millennium Falcon retailed for $420.

In the 15 years since, the Lego Millennium Falcon’s value on the resale market has risen to a whopping $2,555.22, with a percentage increase of 12.8 year on year. The good news is that, with over 5,000 pieces, the set is bound to keep you entertained for a while! 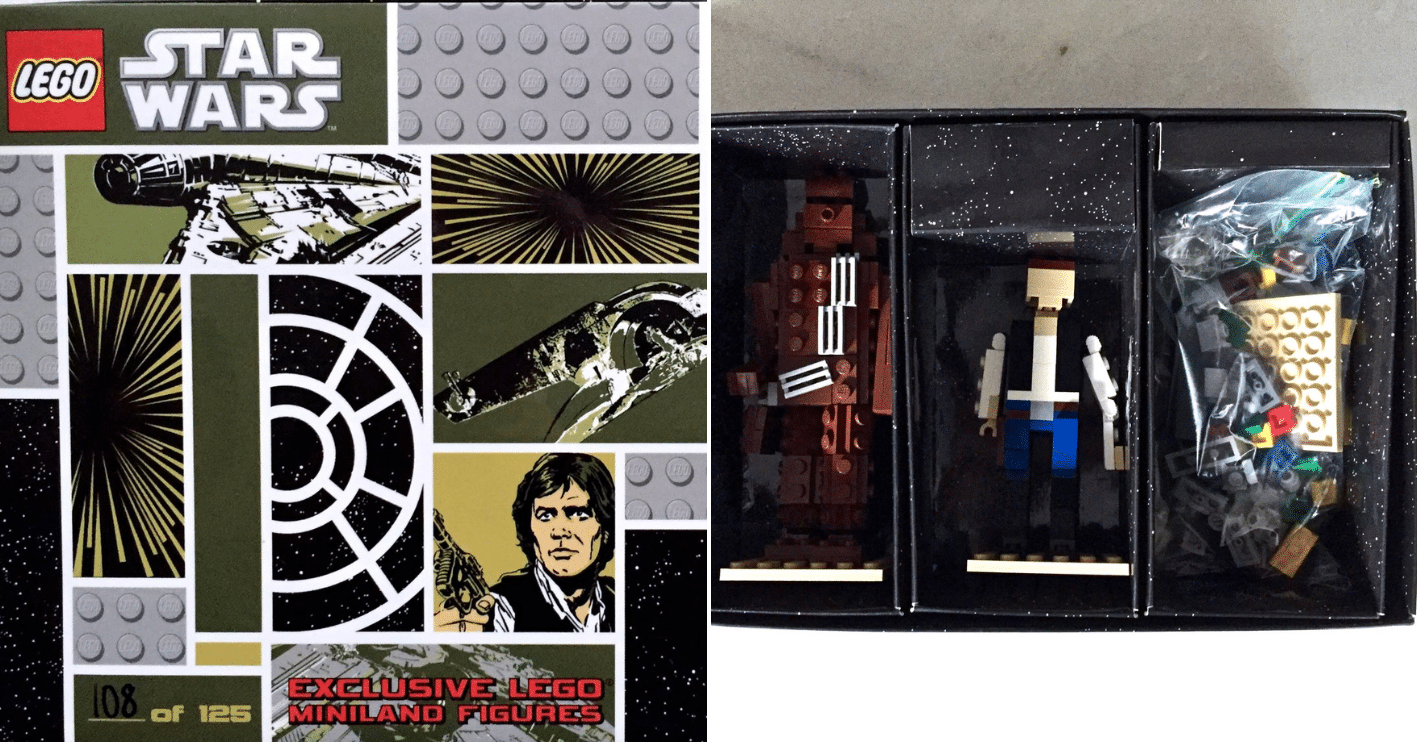 Despite being less detailed than your average Star Wars Lego character pieces, these three featureless Miniland figurines are hugely desirable on the resale market, almost always fetching over $2,500 at auction and only increasing in value year on year.

The reason these gangly-limbed Lego figures are so popular is that they are now retired, and were never even available to buy. Instead of hitting shelves, these exclusive figures were distributed at the 2011 annual International Toy Fair Collectors’ Party in New York. 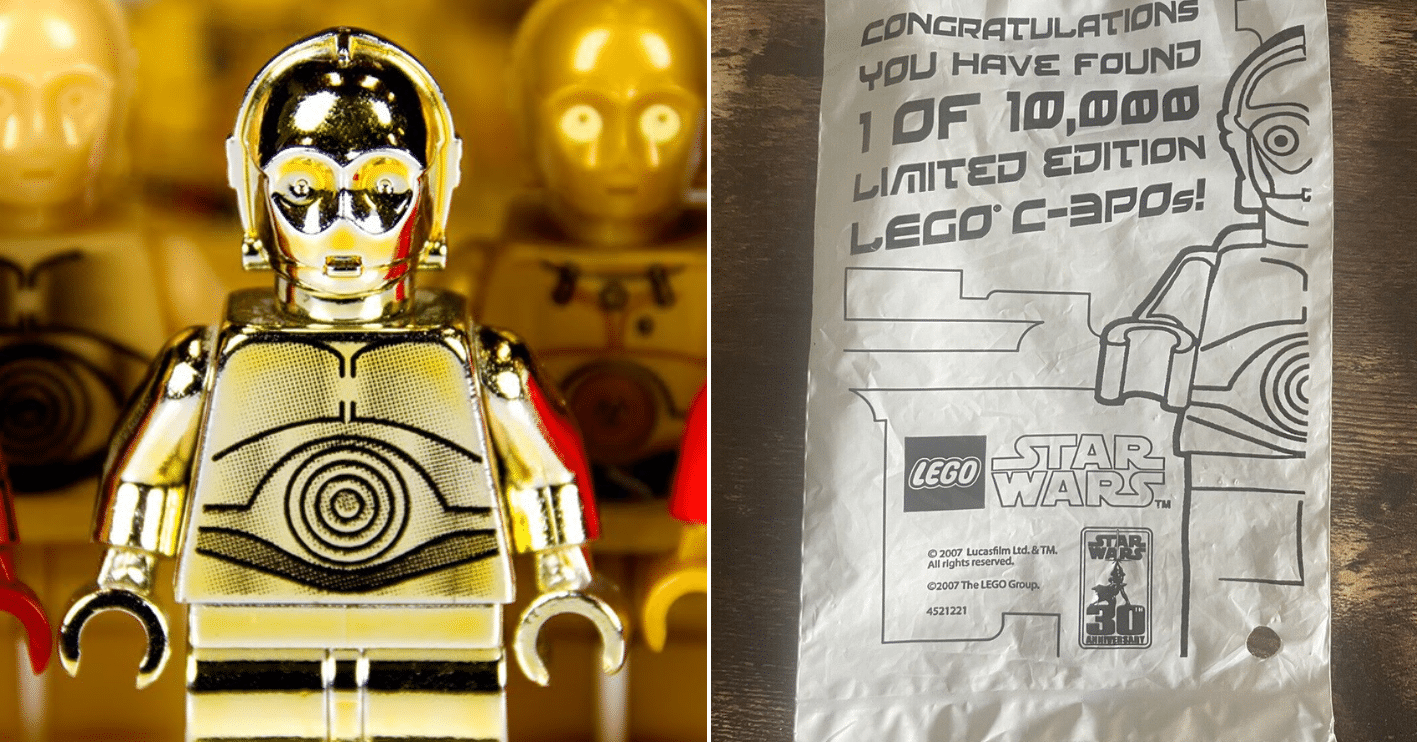 Since the release of the original Star Wars trilogy in the 1980s, several Lego C-3POs have been released. However, even though older figurines tend to be more valuable, it is the 2007 Gold Chrome Plated C-3PO that is worth the most secondhand.

This shiny figurine often fetches around $2,700 at auction, and its value has been increasing by a steady annual 12% for the past few years. So why is this particular C-3PO so coveted? Well, not only was it released in 2007 to mark the 30th anniversary of Star Wars, but only 10,000 of these figurines were made in total. 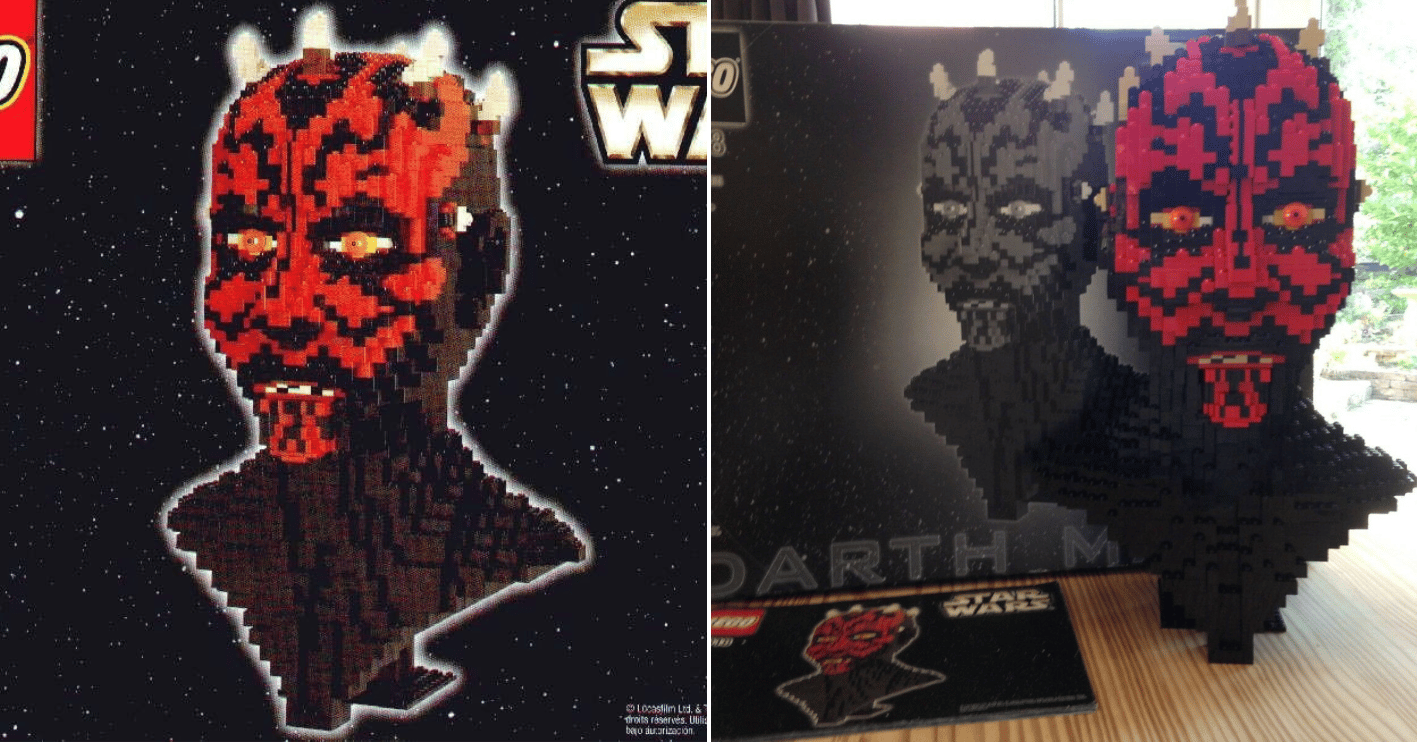 Darth Maul was the first villain that the Star Wars prequel series introduced, and is by far its most beloved even today. It might help explain why this 2001, 1,868-piece 3D Lego Darth Maul head came to be worth $2,884 at auction, despite being retailed in 2001 for just $144.

Since then, the value of this playset has increased by over 1,887%. The desirability of this buildable Darth Maul can be put down to the fact that it was released as part of the Ultimate Collector Series, and was retired after spending not much time on the shelves. 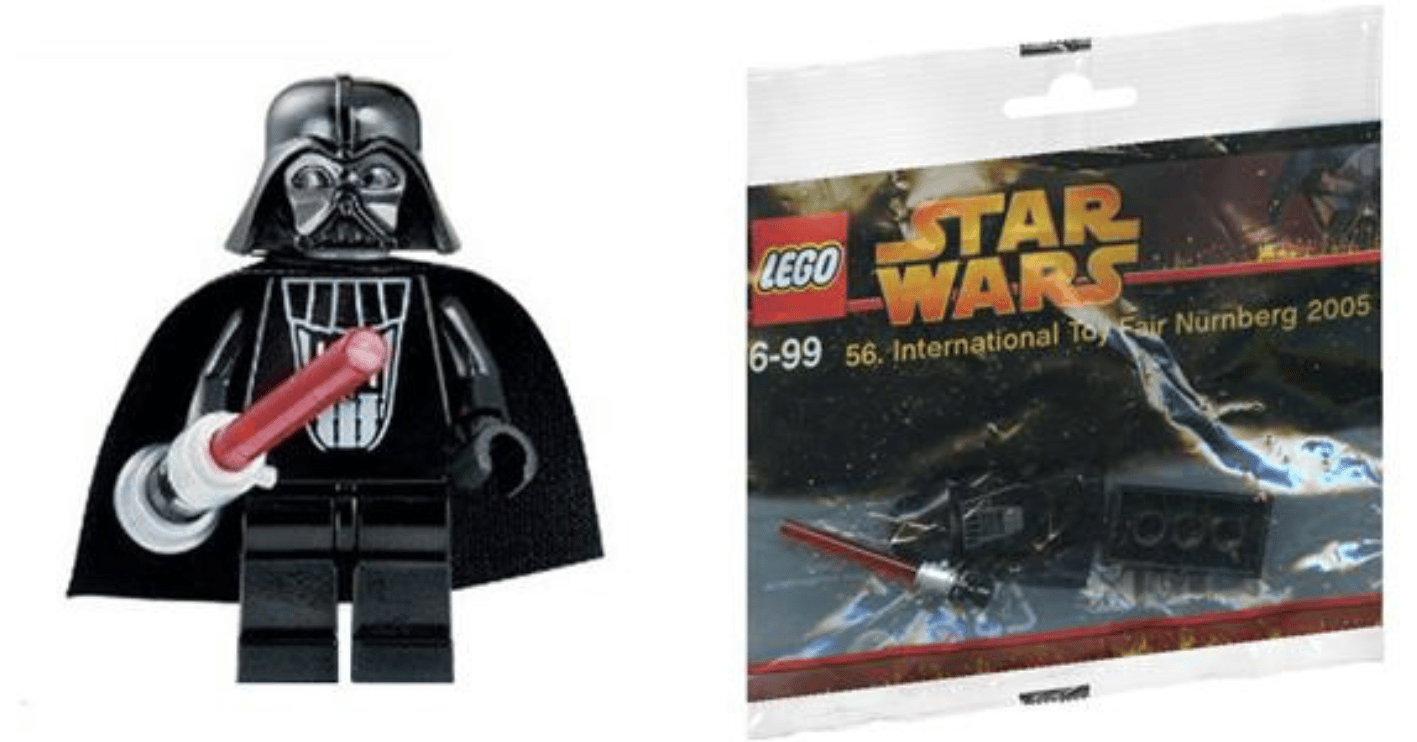 If you’re looking to determine the value of a collectable toy, the biggest indication of value is age, followed by condition, followed by whether the toy was released as part of a limited edition run or special commemorative event. This is especially important to keep in mind when determining the value of the 2005 Toy Fair Darth Vader.

Despite being a fairly recent release of a major and not particularly rare character, the 2005 Darth Vader was given to VIP attendees of the Nürnberg Toy Fair in 2005. This explains why the figurine is now worth roughly $2,902 on the resale market, and is increasing in value by 23% year on year. 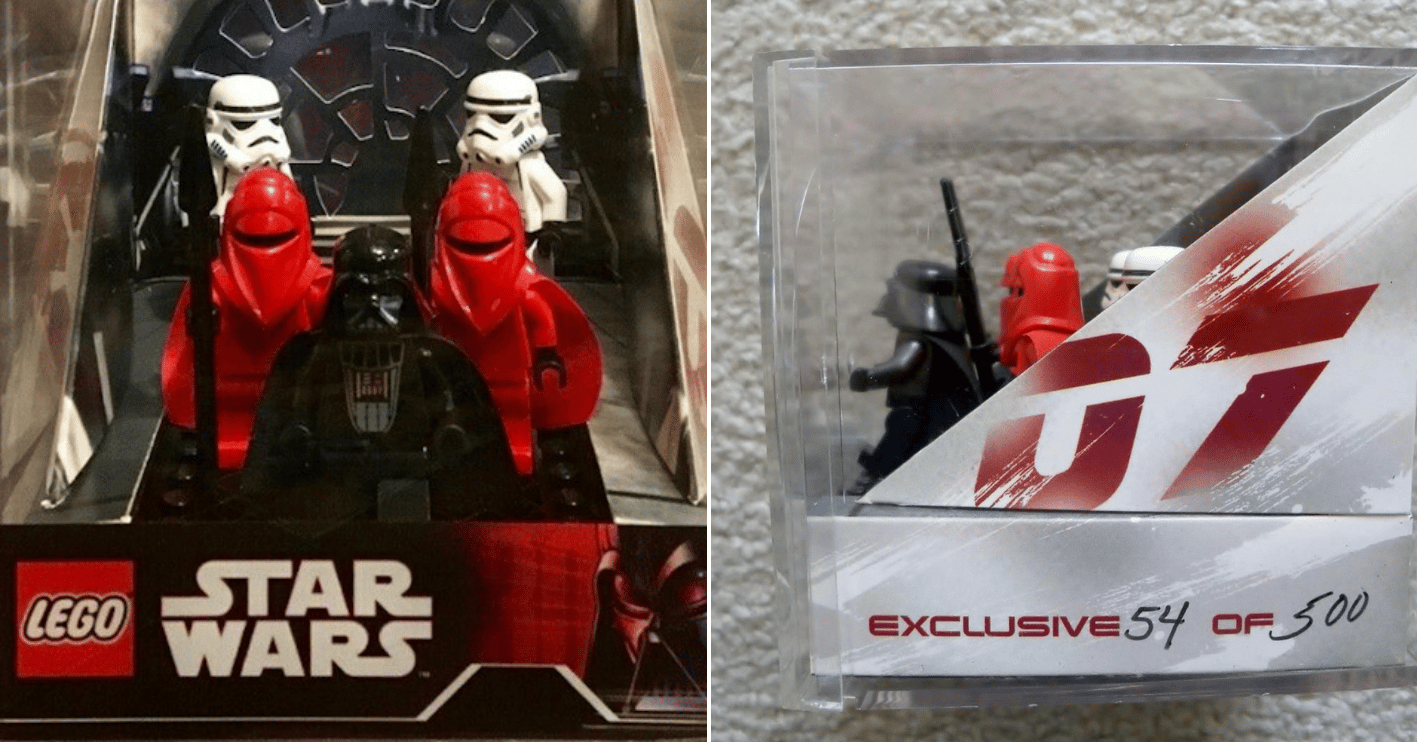 Only 500 of these were ever made, with 100 sets a day being made available to winners if they chose to redeem them. Though those same sets had a retail value of $47, their value now stands at $3,087 when kept in new or like-new condition. 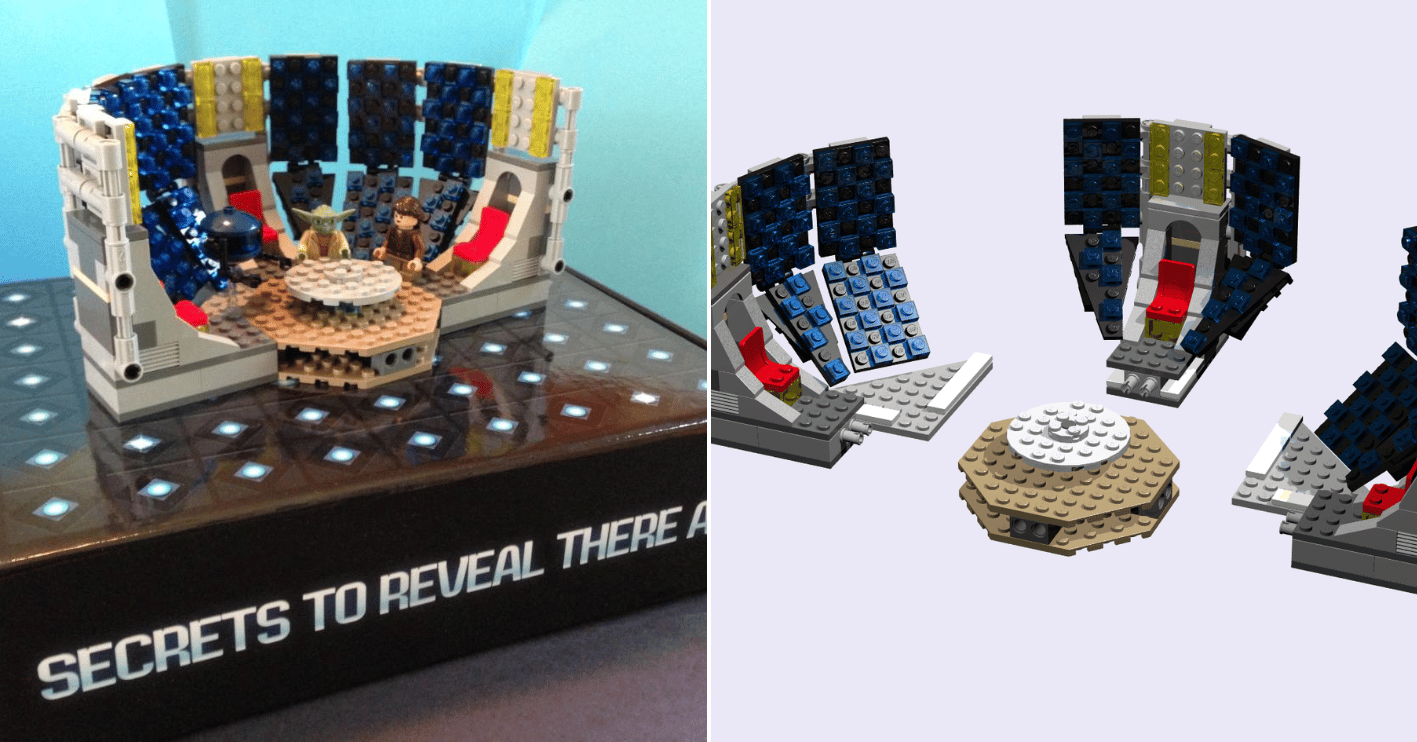 Lego Star Wars spin-off series The Yoda Chronicles ran for just one season between 2013 and 2014, but it added a pretty significant rare toy to the collectors’ market: the 2013 Yoda Chronicles Holochron Chamber. This 408-piece playset was purely promotional, given away to journalists at a New York red carpet event to promote the new show.

As a result, very few exist in circulation at all, and the savvy journalists who decided to keep and sell theirs can now get a pretty payout to the tune of $3,363. The value of this playset is set to increase by another 22% next year, so it’s worth getting in on the ground floor of the toy if you can. 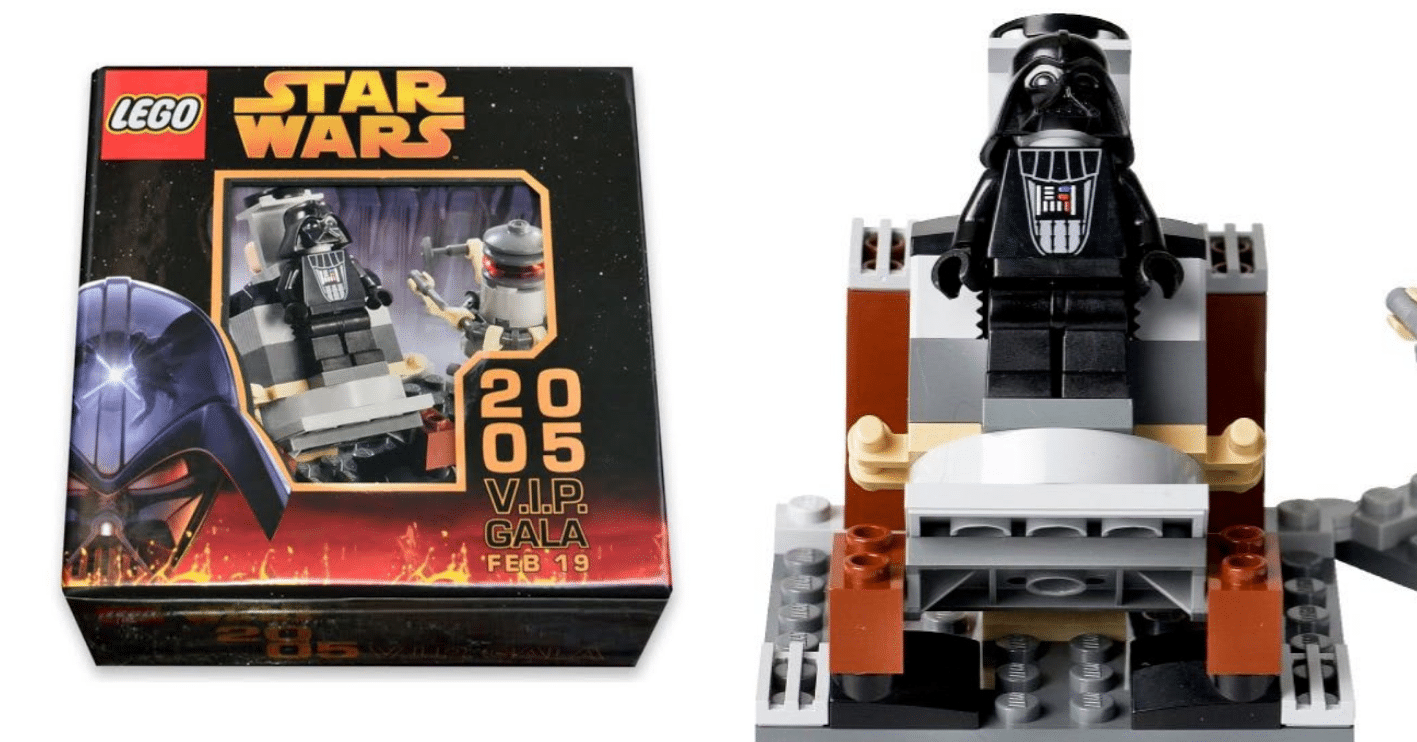 One of the most valuable toys to hit the American Toy Fair in recent years is the 2005 Star Wars V.I.P Gala Set, which was released to promote the Lego Star Wars Episode III Revenge of the Sith collection and features mini-figures of Darth Vader and Anakin Skywalker.

This set was released at the 2005 Toy Fair, and was snapped up by eager Star Wars collectors and Lego enthusiasts alike. Today, its value has increased up to a whopping $3,539 and is set to increase by another 12% in the next 12 months. 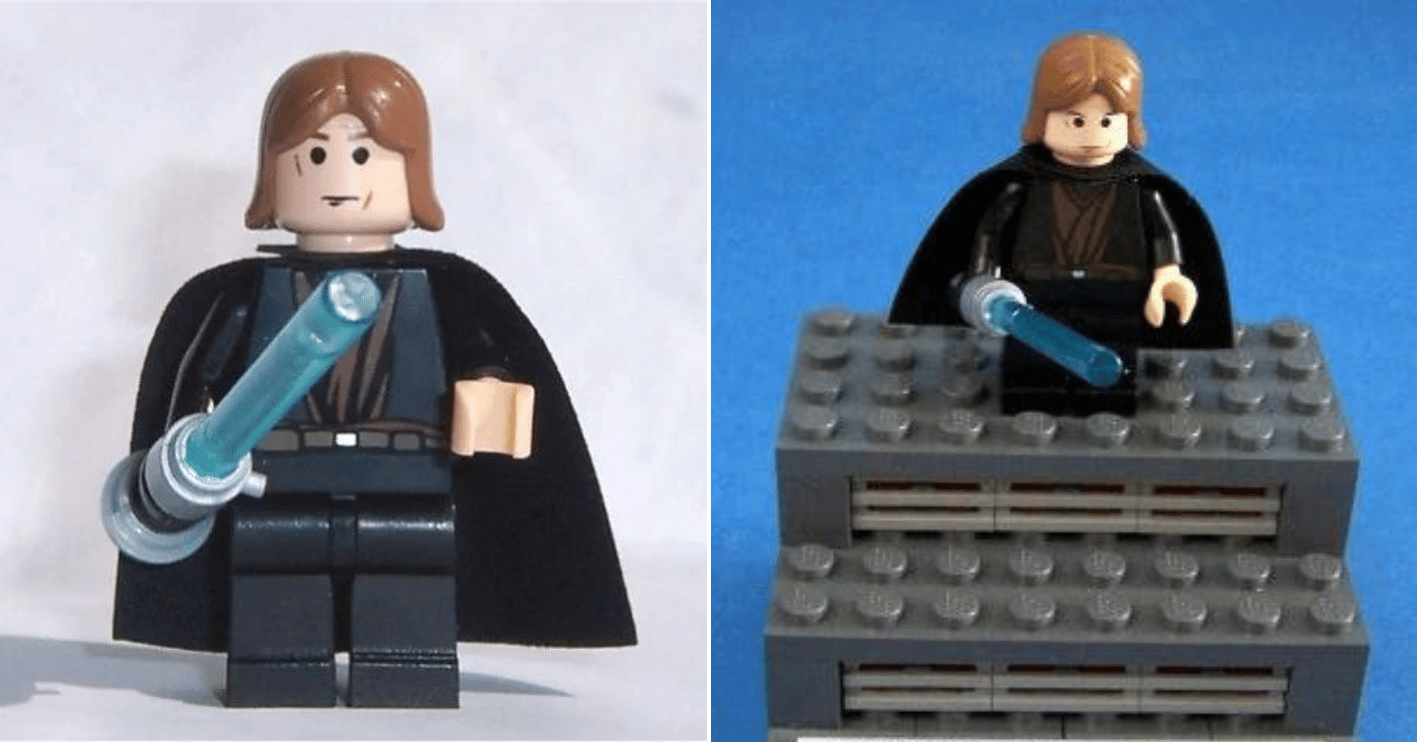 The 2005 Anakin Skywalker mini-figure – another promotional release given to VIPs at the 2005 Toy Fair – came with a light-up lightsaber and decorative stand, and now retails for around $4,522 on the secondhand market.

The 2005 Anakin Skywalker has a slower value growth rate than many of the other Lego figures on this list, but that’s mostly down to how high its value already is. Its year-on-year growth prediction rate sits at around 10%, so it still has the potential to net a collector a pretty penny further down the line. 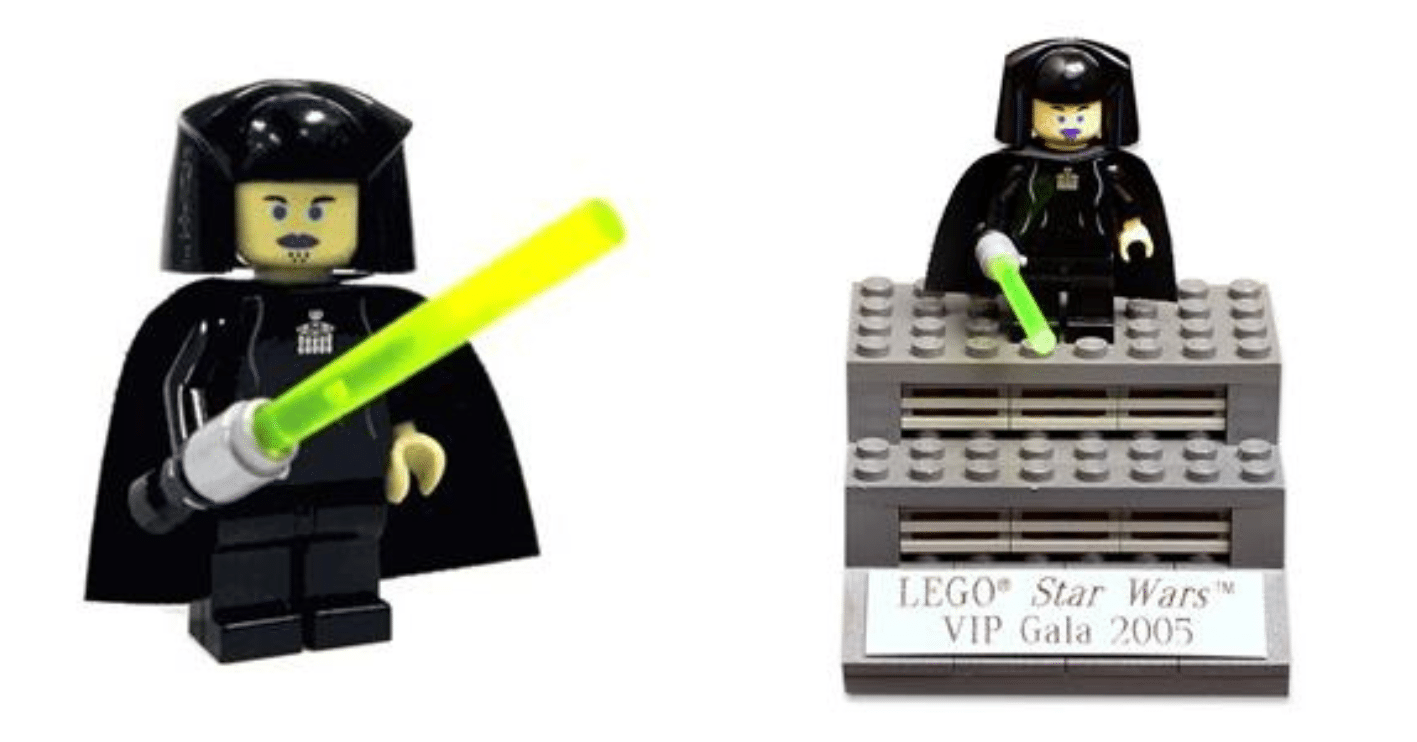 One of the strangest laws of rare toys is that ironically, the less popular a character is, the more demand there is for its merchandise on the resale market (with unpopular characters having less of their merchandise bought the first time around, and the scarcity then inflating the value of the remaining units later).

This explains why, out of all of the 2005 Toy Fair mini-figures, the Luminara Unduli is the most valuable. Though not a character that anyone outside of Star Wars super fandom would know, this figure is worth roughly $5,124 at auction, with value increasing by 21% year on year. 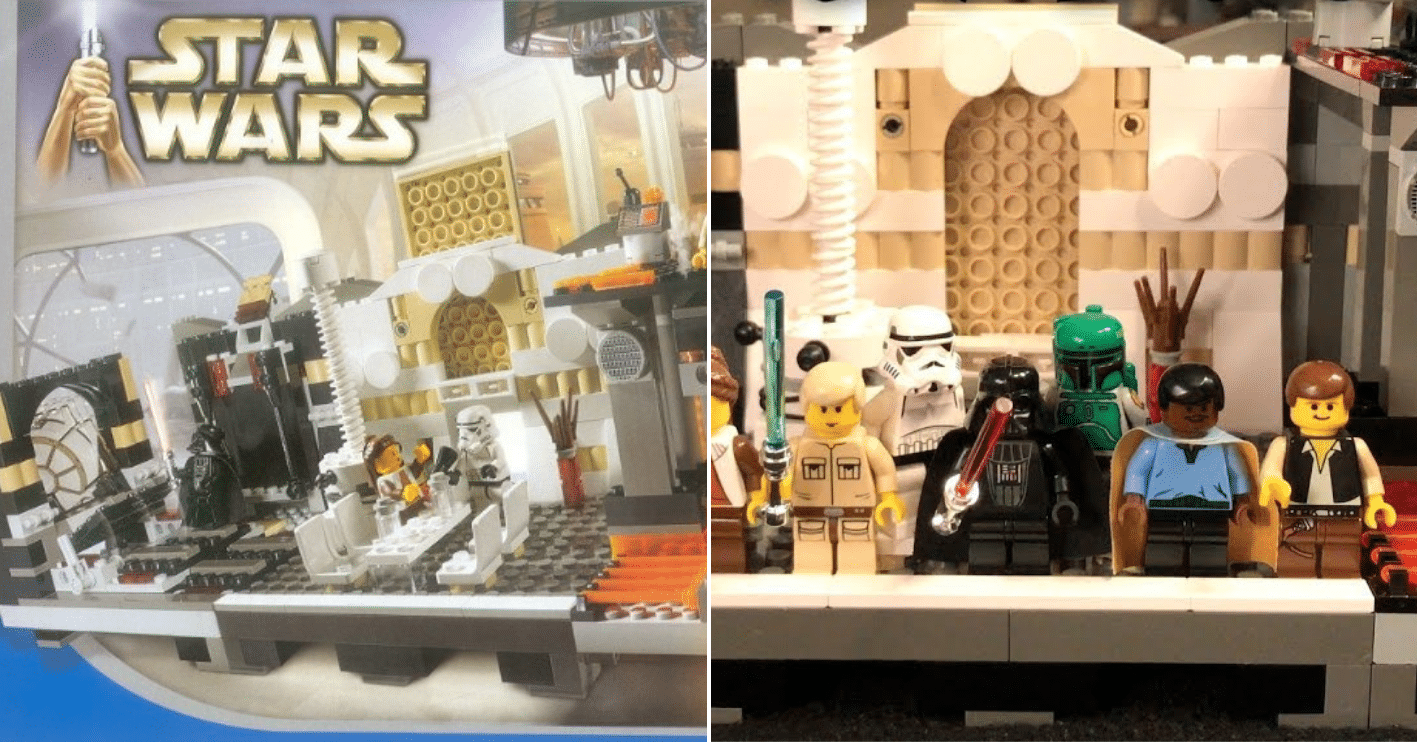 Though it is true that single figurines are often more valuable than playsets, as of 2022 the most valuable Star Wars Lego in the world is the 10123 Cloud City build. This 698-piece playset depicts the gas mining colony overseen by Lando Calrissian, as featured in The Empire Strikes Back.