Disney might be famous today for its obsessive perfectionism and brand management, but the corporation has also had the occasional awkward period in its long evolution. No one time in Disney’s history, however, saw as many baffling decisions made as in the reinvention of the 80s and 90s.

Under the stewardship of Michael Eisner, among the teen nightclubs, accidental crime hotspots and space-age Michael Jackson adventures, in 1995 there came into being a Disney World attraction so terrifying that it would scar both kids and park executives alike.

Extra TERRORestrial: Alien Encounter was closed in 2003, following a number of complaints about the attraction’s scariness; the 2002 arrest of preshow actor Jeffrey Jones; and the huge success of Lilo & Stitch, with a ride based on the latter ultimately replacing Alien Encounter in 2004. This is the story of how Disney opened – and, in less than a decade, closed – the most frightening ride in its history. 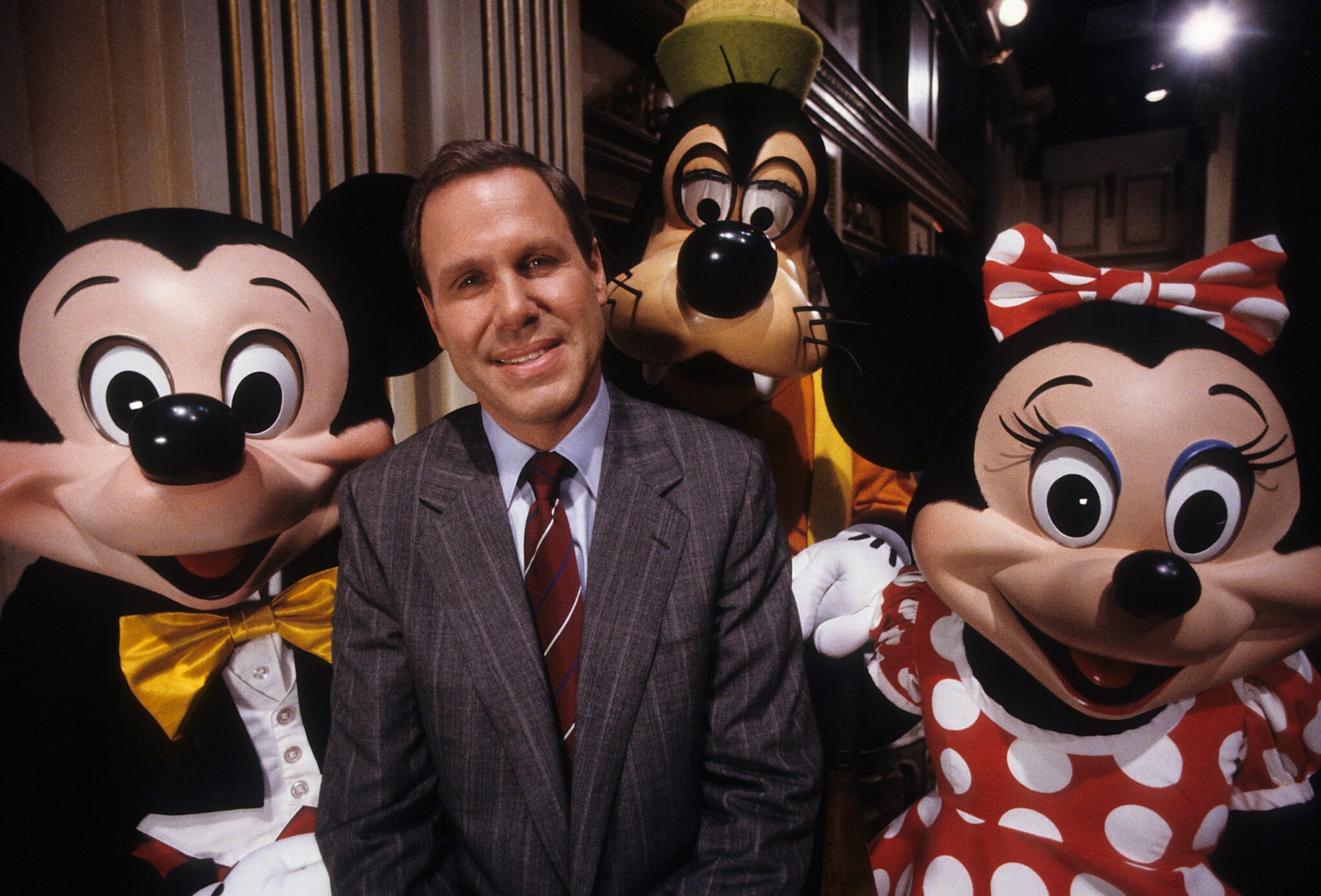 Disney has been wildly successful in its time, pioneering many game-changing customer-engagement techniques, from queue-theming and scent marketing to digital tickets and FastPass. The corporation even had a hand in the invention of Doritos, which were initially sold as a theme park snack by a vendor in Disneyland.

In 1984, Michael Eisner was voted into the position of Disney CEO by shareholders, after several years of working as the COO of Paramount Pictures. He inherited a company that was still struggling to find its direction and identity after the death of Roy Disney in 1971, and the spectacular failure of movies like The Black Cauldron and Pete’s Dragon.

Eisner ushered in the Disney Renaissance by overseeing movies like Who Framed Roger Rabbit, The Little Mermaid and Beauty and the Beast, but he also made it his mission to revitalise the neglected and outdated theme parks. In particular, Eisner wanted to make the parks more exciting to young teens, after his son Breck complained that there was nothing for him to do during a walkaround of the various attractions.

When exit surveys confirmed that teen guests felt uncatered for, Eisner reached out to George Lucas, and the pair collaborated on several projects to make the parks more dynamic – namely the Indiana Jones Stunt Spectacular and Star Tours. However, Eisner still felt the Magic Kingdom was lacking scares, and set his sights on acquiring the rights to the sci-fi horror movie franchise Alien.

In Magic Kingdom, no one can hear you scream… 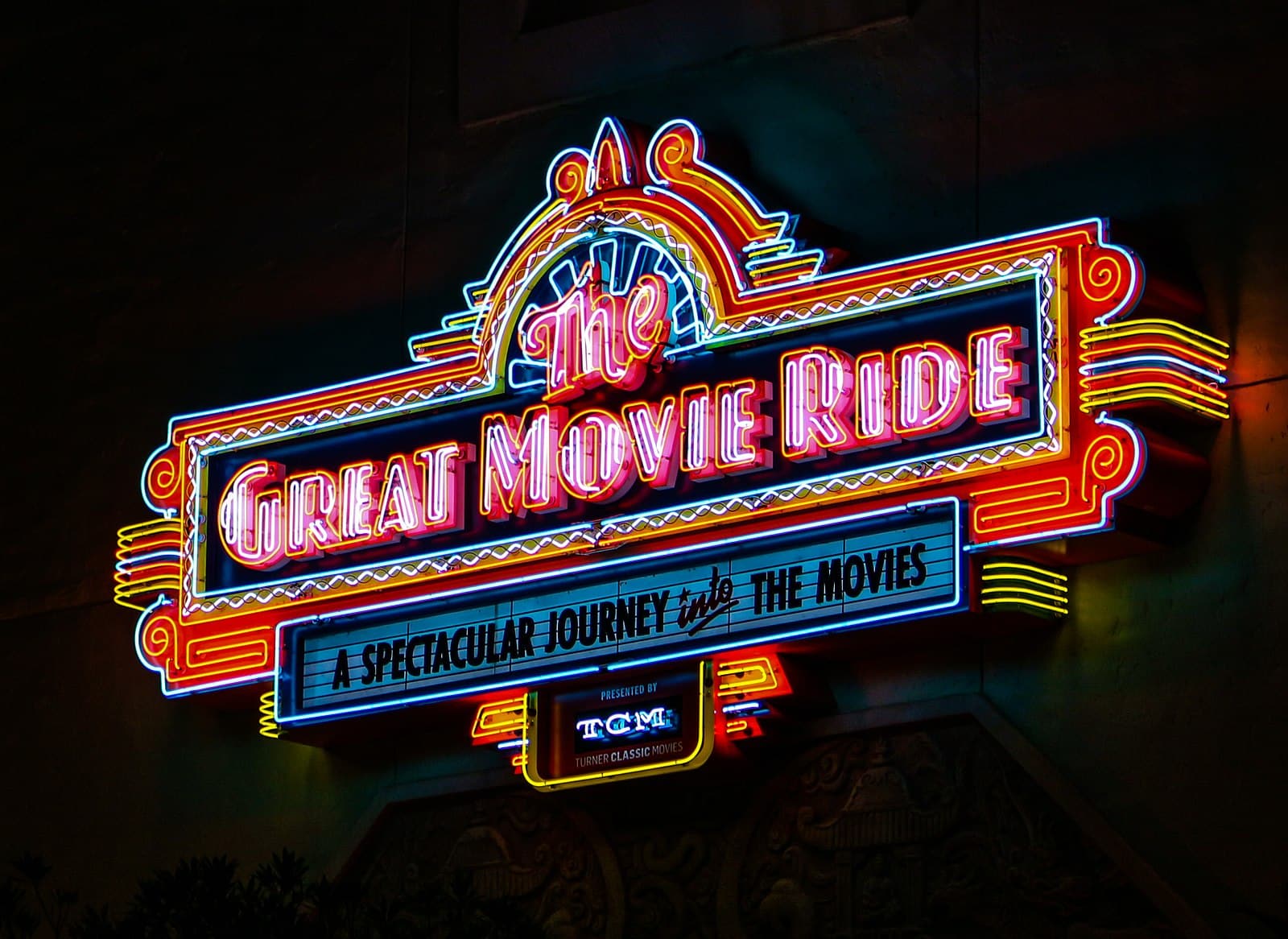 For the younger Imagineers who had entered the company hungry to prove themselves, this was a win-win. Tomorrowland’s Mission to Mars ride was run-down and uninspired, and the round theatre was the perfect place to build a horrifying Alien-themed show.

However, there were many Imagineers still active in the 80s who remembered what it was like to work under Walt Disney, and who were steadfast in their belief that the property did not belong in the wholesome Magic Kingdom.

These elder Imagineers were so concerned about Eisner’s vision for the park that they reached out to George Lucas directly and asked him to use his considerable pull to change Eisner’s mind. It worked, and the Nostromo version of the ride was scrapped. (Michael Eisner did eventually acquire the rights to the Alien franchise, and included a Xenomorph scene in the Great Movie Ride, which opened at Disney’s Hollywood Studios in 1989.) 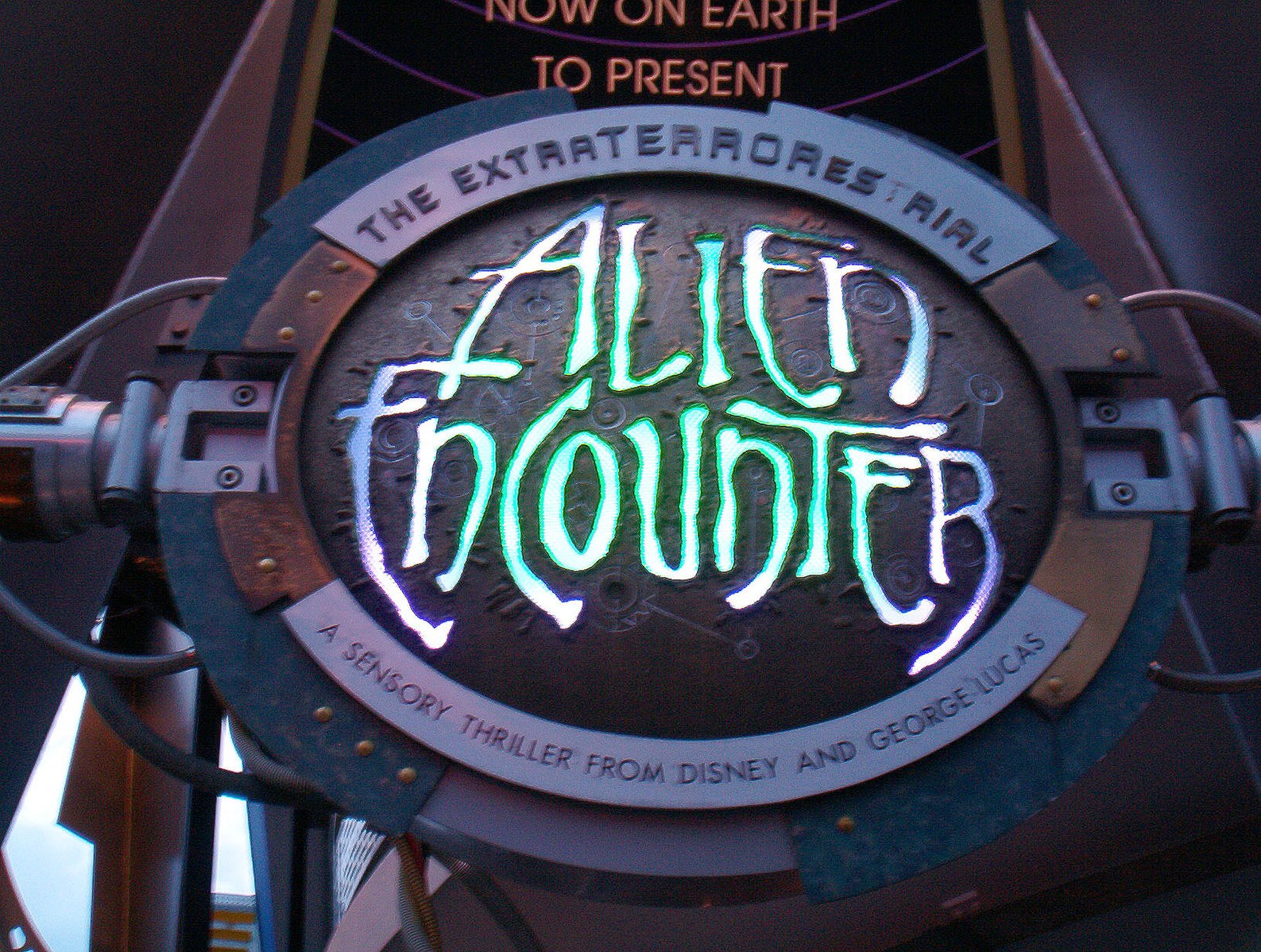 After months of development, including a false start in which the titular alien was planned to be a kind-hearted creature that freed the audience in favour of devouring the evil scientists who transported him, Extra TERRORestrial: Alien Encounter finally opened in 1995.

Emphasis was placed on making sure families understood what they were getting themselves into, so numerous warnings were placed around the ride’s entrance. These signs explained that the show featured “loud noises” and “total darkness”, and was possibly “too intense for children and some adults”.

To really hammer the point home, a sinister pre-show featuring Tim Curry and Ferris Bueller’s Day Off villain Jeffrey Jones was concocted, in order to scare away nervous patrons before they took their seats. 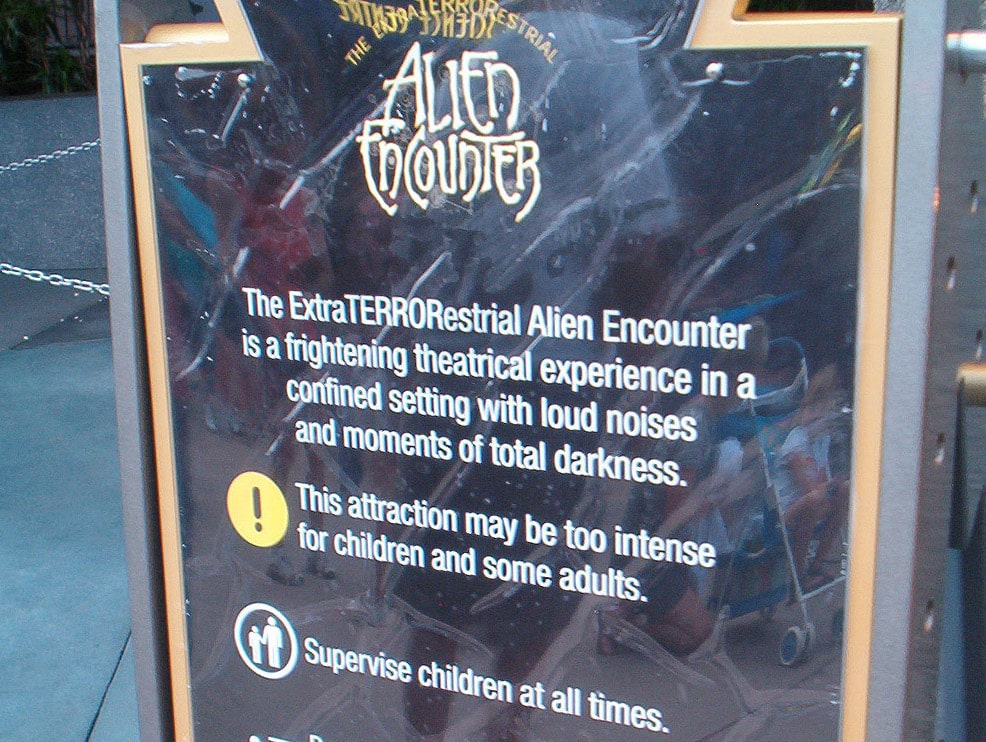 In the pre-show, the sadistic S.I.R. animatronic (voiced by Curry), demonstrated X-S Tech’s new teleportation technology by frying an innocent baby alien called Skippy. Hilariously, audiences were so taken with Skippy that he became a fan-favourite character, in the league of Orange Bird and Buzzy.

The ride itself used binaural audio and mists of warm water to simulate a ferocious alien being transported into the chamber and menacing guests, spraying them with spittle or blood as it pads and flies around, before finally being recaptured in the teleportation chamber.

Though the ride immediately garnered a cult following that endures today, the threat of closure was apparent from Alien Encounter’s opening day, and the ride lasted less than a decade of operation in its original form.

Complaints plagued the ride, with many parents reportedly outraged that the experience was allowed to operate in Magic Kingdom, saying that the numerous warnings weren’t enough as they would never expect such a high-intensity attraction to be so close to other, more family-friendly fare. 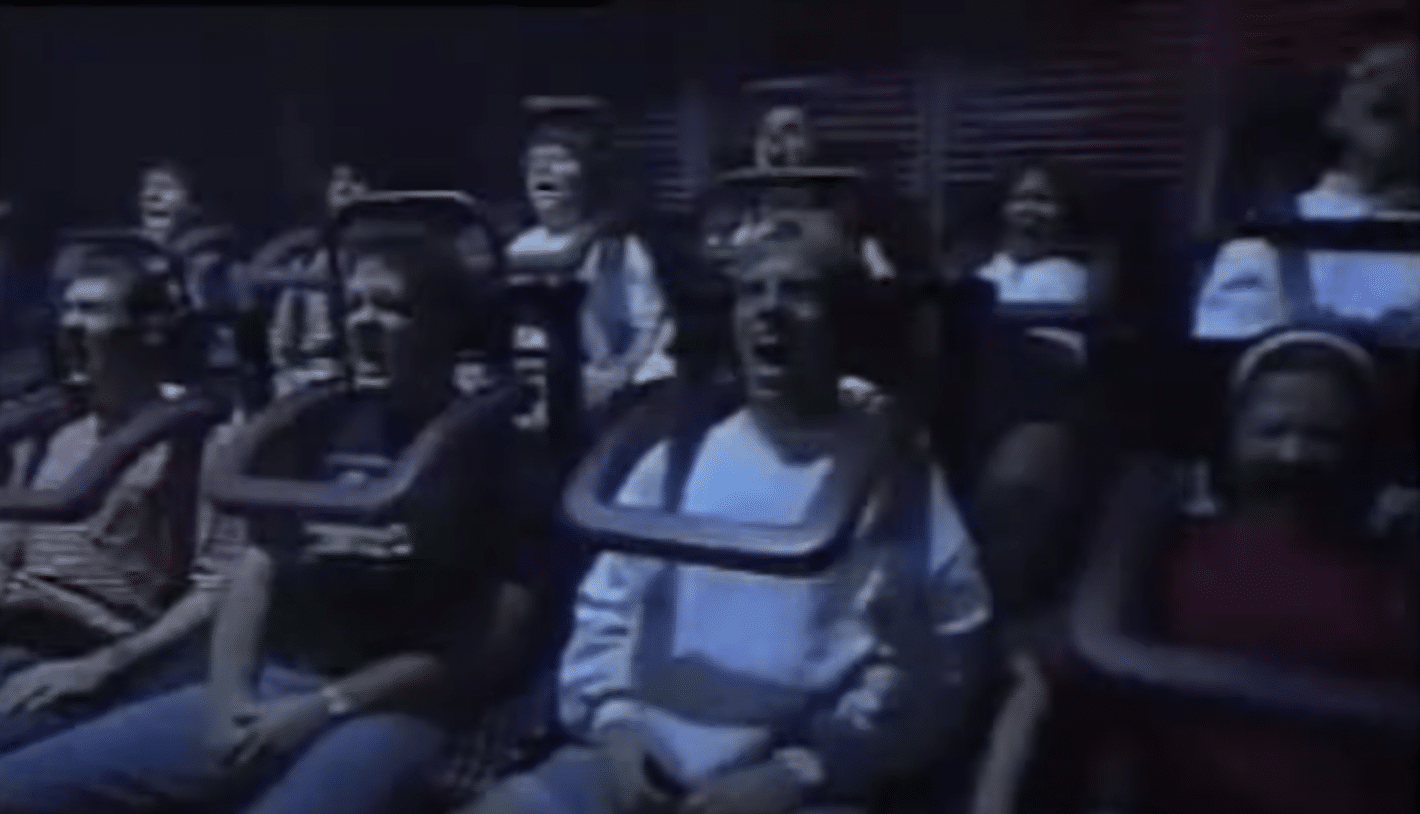 Two other factors compounded to make the closure of Extra TERRORestrial: Alien Encounter almost inevitable. The first was the 2002 release of Lilo & Stitch, in which Disney introduced an instantly beloved alien character, thus priming Alien Encounter to morph into a more convenient IP tie-in.

The second was the arrest of Jeffrey Jones, who in 2002 was arrested for possession of child pornography and accused by a 17-year-old boy of solicitation to pose for nude photographs. Given that Jones featured extensively throughout the Alien Encounter preshow, some have speculated that the ride was closed down in part in order to avoid any bad press from the conviction.

From boo to blue 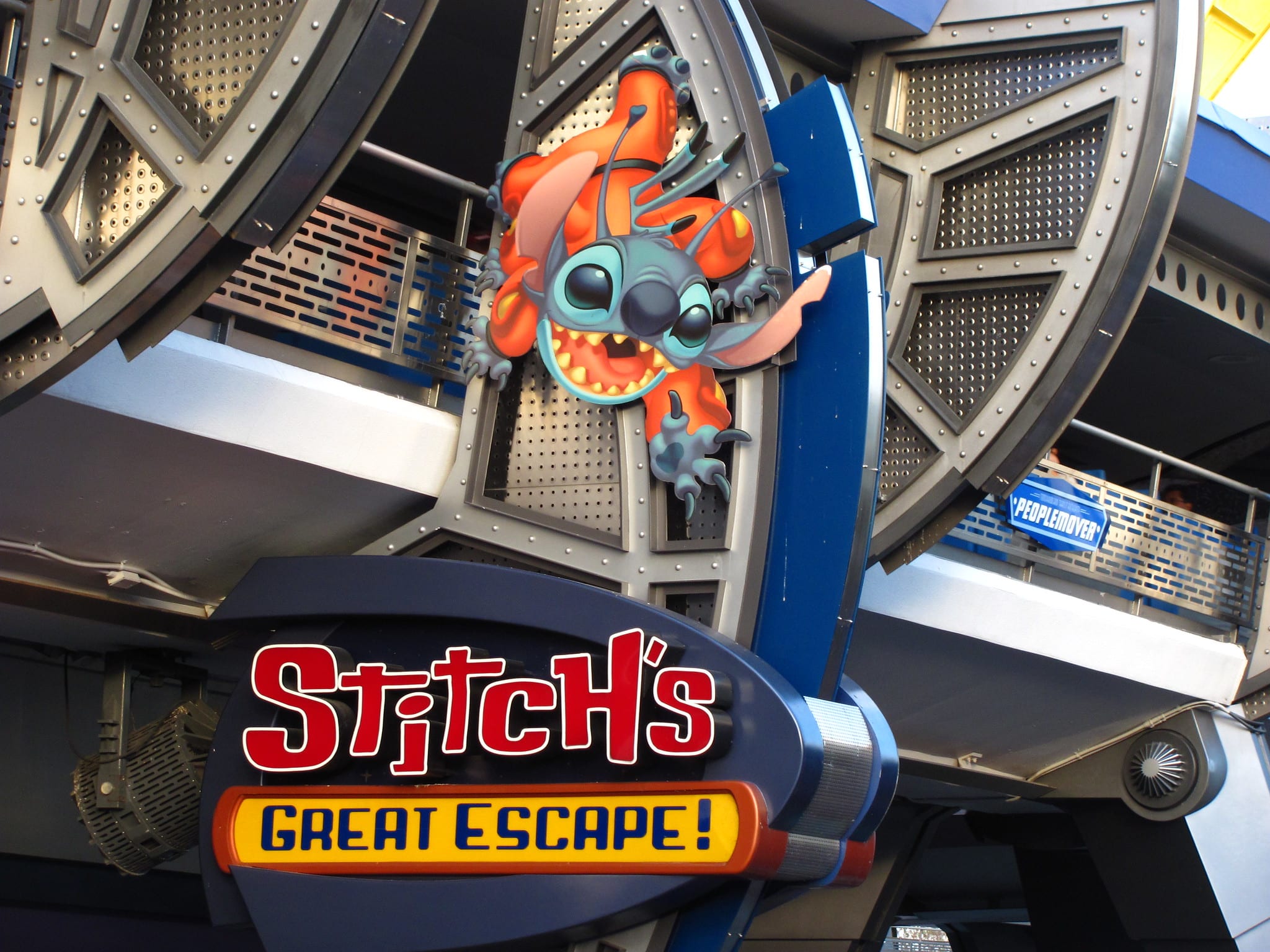 After less than a year of redevelopment, in November 2004 the former Extra TERRORestrial: Alien Encounter building was reopened as Stitch’s Great Escape. The attraction aimed to make the alien breakout theme more appropriate for young children, as well as capitalise on the success of Lilo & Stitch. Unfortunately, in addition to angering Extra TERRORestrial fans who mourned the loss of a boundary-pushing experience, Stitch’s Great Escape also failed to win over families.

Stitch’s Great Escape closed on January 6th, 2018, after being moved into seasonal operation on October 1st, 2016. The official closure announcement came on July 16th, 2020. The ride likely closed due to lack of interest, with fans naming it “the worst attraction in the Magic Kingdom”, and citing the chilli dog-scented burp as making them nauseous.

As for what will replace Stitch’s Great Escape, rumours have abounded about a Wreck-It Ralph attraction taking over the footprint in Tomorrowland, and in March of 2020, Disney filed permits for interior demolition of the show stage. This backs up theories that the Wreck-It Ralph show would make use of the in-the-round theatre layout, but would add game controllers to each seat in order to create an immersive gaming experience.