The 50ps That Are Worth Much More Than 50p

Everyone has something that they like to collect. For some people, it’s action figures from their favourite movie. Philatelists are people who like to collect stamps. Magpies like to collect things that are shiny. And then there are those who enjoy collecting coins. We’re not talking about putting the odd penny in a jar and saving them for a rainy day, we’re talking about rare coins, ones that you don’t come across every day. ***

And perhaps the coin with the widest variety of design is the 50 pence piece, one of the largest coins to put designs on.

The coin was introduced back in 1969 and has featured four designs of the profile of Queen Elizabeth II. It is a seven-sided coin formed as an equilateral-curve heptagon, or Reuleaux polygon, meaning that the diameter is constant across any bisection.The coins are legal tender are up to the sum of £10.This means you are allowed to refuse payment of sums greater than this amount in 50p coins, but we doubt many people would turn them away.

As of March 2014, there were estimated to be 948 million 50p coins in circulation. But some of these 948 million are much rarer than others. Certain designs are only have a very limited mint, which means they are fewer and far between. This means that certain coin collectors will dig deep and pay much more than the face value of the coin to have it in their collection.

We’re going to count down the top twenty 50p pieces on the scarcity index. You never know…that spare change in your pocket might be worth a bit more than you realise. *** 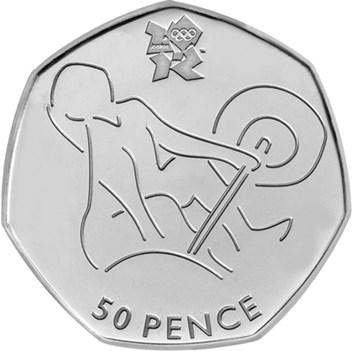 The outline of a weightlifter starting a lift.

This 50p coin comes in at number 20 on the scarcity index.

The coin was designed by Rob Shakespeare.

One of these is currently listing on ebay at £3.55 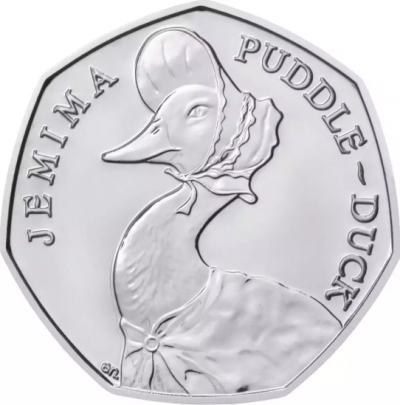 This 50 pence shows the image of the Beatrix Potter character, Jemima Puddle-duck.

The coins were launched in 2016 to commemorate 150 years since the author’s birth, who lived and worked in the Lake District. 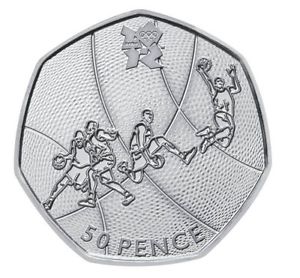 This coin features Basketball players against the textured background of a large basketball.

It was designed by Sarah Payne. 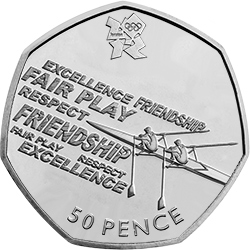 Many in the top 20 feature designs that were released to commemorate the 2012 Olympic Games.

This coin features a rowing boat accompanied by a number of words associated with the Olympic movement.

The coin was designed by Davey Podmore. 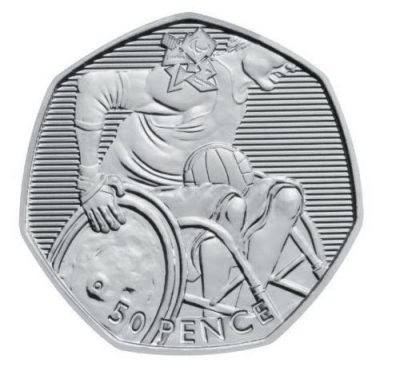 A wheelchair rugby player in action.

This 50 pence was designed by Natasha Ratcliffe. 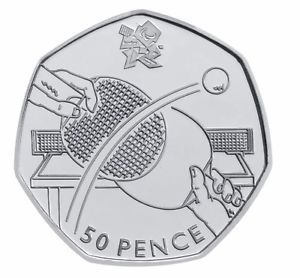 Two table tennis bats against the background of a table and net.

This 50 pence coin was designed by Alan Linsdell.

You can grab yourself the coin on ebay for £4.55 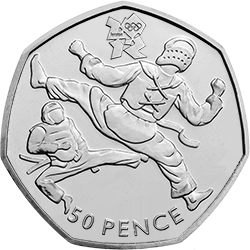 This coin was designed by David Gibbons. 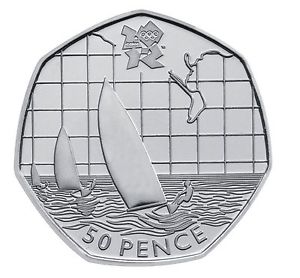 Three sailing boats accompanied by a map of the coast of Weymouth.

This coin was designed by Bruce Rushin.

Weymouth is a lovely part of the world.

These are currently selling on ebay at £5.25. 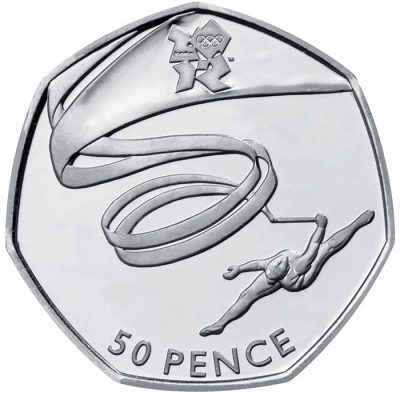 A gymnast with a ribbon.

This coin was designed by Jonathan Olliffe. 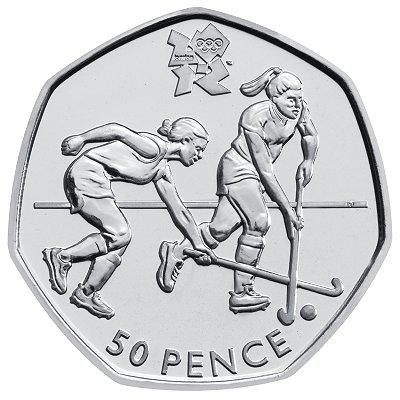 This coin was designed by Robert Evans. 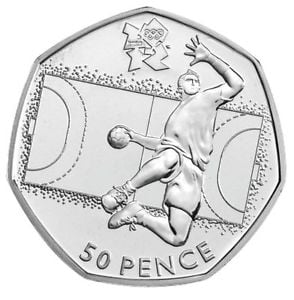 A handball player throwing a ball against the background of a handball court.

This coin was designed by Natasha Ratcliffe. 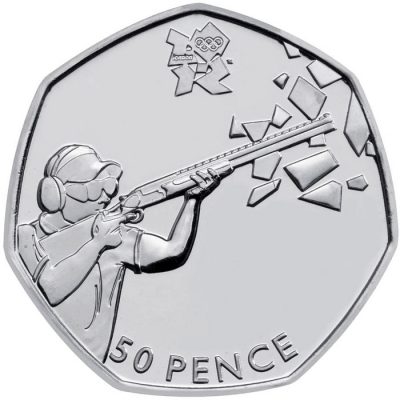 A figure shooting, with the London 2012 logo above.

This coin was designed by Pravin Dewdhory. 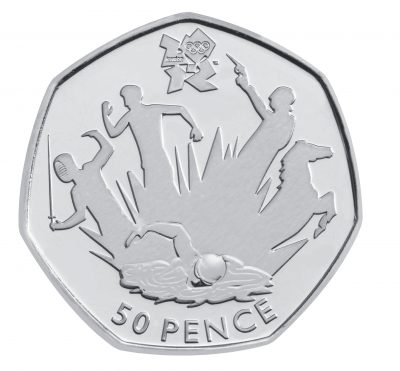 A montage of the five sports which form the modern pentathlon.

These are swimming, fencing, shooting, running and riding.

This was designed by Daniel Brittain. 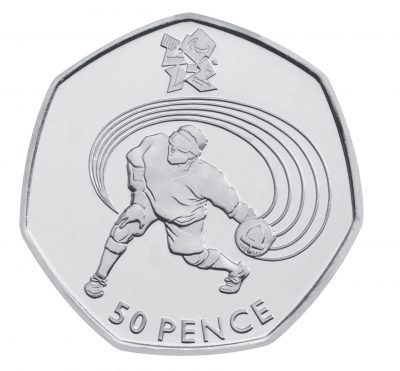 A goalball player throwing a ball.

This coin was designed by Jonathan Wren. 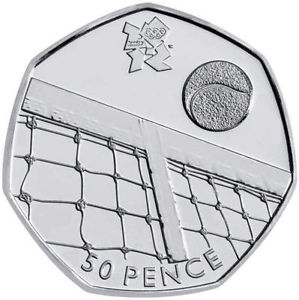 A tennis net and a tennis ball.

This was designed by Tracy Baines. 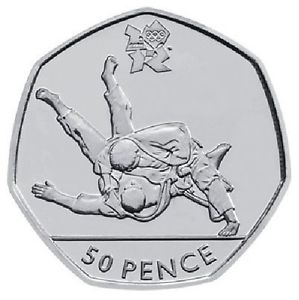 This coin was designed by David Cornell. 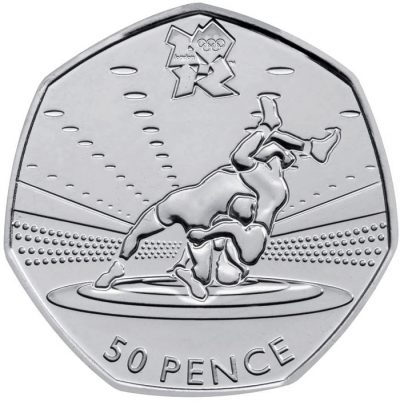 Two figures wrestling in a stadium.

This coin was designed by Roderick Enriquez. 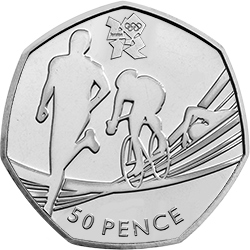 And now we get to the top three.

It was designed by Sarah Harvey. 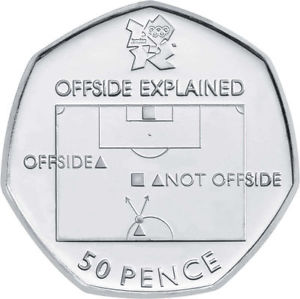 In number two spot is the 2012 50 pence piece, featuring a diagrammatic explanation of the offside rule in football.

The offside rule is usually a problem explaining to anyone who doesn’t watch football.

Luckily, all you need to do it whip this 50 pence out to show them. 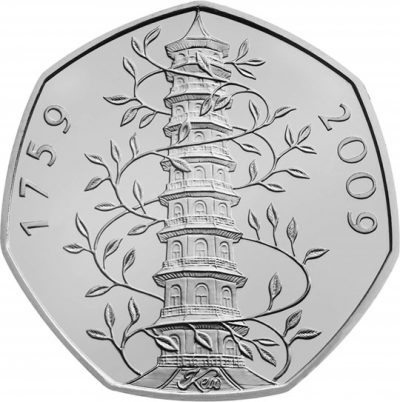 This is the piece-de-resistance of all 50 pence coin collectors.

It comes in as the rarest 50 pence that you can find.

It actually means you only have 0.02% chance of finding one amongst all the rest of them.

It was minted in 2009 to celebrate the 250th Anniversary of the Royal Botanic Gardens at Kew.

Because of its rarity, you can expect that it will fetch quite a lot more than just 50p, with some prices on ebay creeping into the hundreds.

So, do you have any of these rare coins and want to make a bit of money quick? It might just be worth sticking them on ebay and making that 50p stretch a bit further than it otherwise would.

Note that prices fluctuate quite a lot on ebay and the differ rise dramatically.

It’s also worth noting that there are a lot of fakes out there, so unless you are buying from a trusted seller, you might be buying a dud.

If you’re wanting to sell one, then it is definitely best to do your research beforehand.

You don’t want to put a ridiculous price on it and no one buy it, perhaps go for an average between the highest and lowest.