The 15 Craziest Oscars Moments Ever

It’s the biggest event of the year in every film fan’s calendar, the exclamation point at the end of awards season that establishes once and for all the best films of the previous 12 months. For some more casual film fans, however, the Academy Awards is entertaining for a different reason.

Tightly-controlled though the ceremony is, the Oscars is – like all live television – rarely without its share of gaffes. Sometimes, these gaffes might be so huge that they turn a lightly funny if dry show into spectacular car crash television. Here are 11 Oscars moments from history that showed the Academy Awards ceremony at its craziest.

15. A producer is included in the In Memoriam segment, despite still being alive 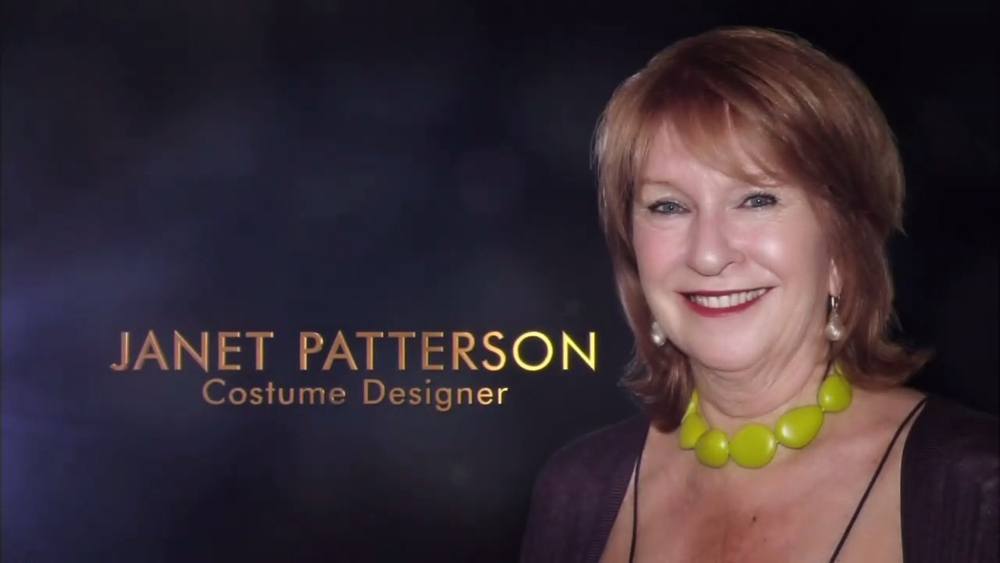 Anybody who’s ever watched the Oscars knows that invariably the most emotional moment of the night is the In Memoriam segment. The 2017 Oscars In Memoriam section proved emotional one for Jan Chapman for a very different reason, however.

As names and photos of the recently deceased flashed across the screen, Oscar-nominated producer Chapman saw her own image appear. Though the montage was honouring costume designer Janet Patterson, it was the still-living Chapman’s picture that mistakenly accompanied Patterson’s name.

14. South Park’s creators trip on acid on the red carpet 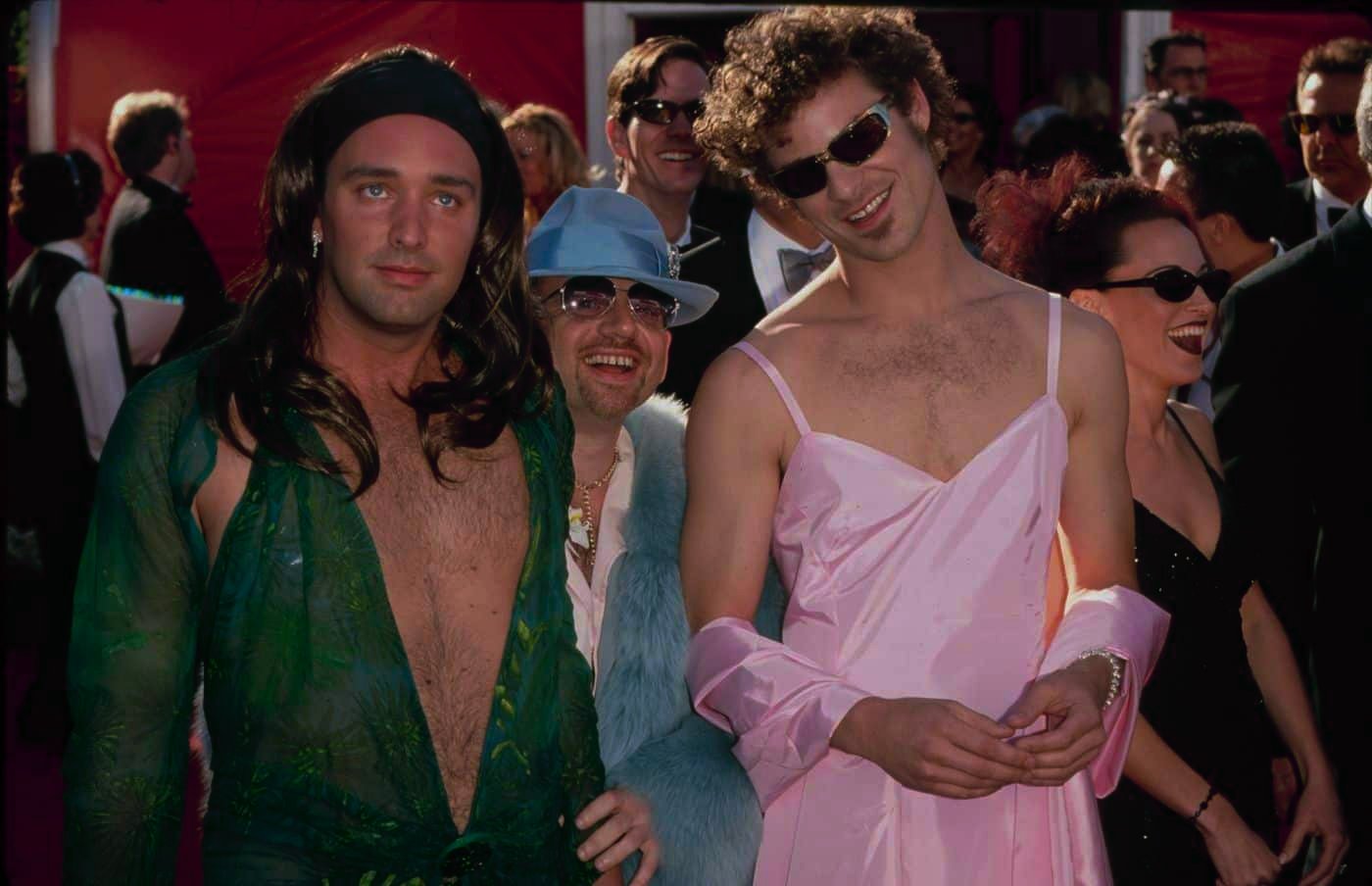 Naturally, Parker and Stone came dressed as Jennifer Lopez and Gwyneth Paltrow, respectively. It was an idea that probably seemed good at the time, especially considering Parker and Stone had dropped acid prior to arriving at the ceremony. 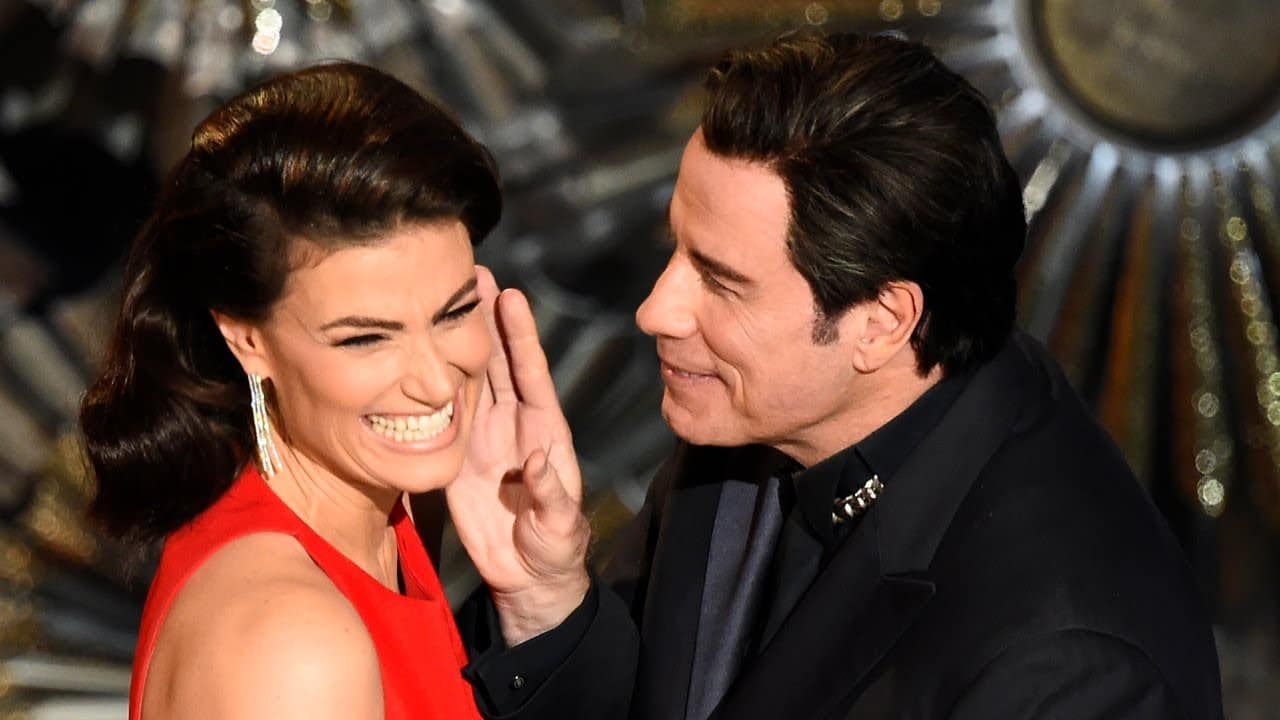 With Grease and Saturday Night Fever star John Travolta being such an old Hollywood pro, it made perfect sense to have him present a song at the 2014 Oscars. What nobody predicted was just how difficult the name ‘Idina Menzel’ – Oscar-nominated for Frozen’s Let It Go – would prove for the Pulp Fiction star.

Travolta, doing a fine job up to that point at just reading the damn words on the autocue, stumbled at the final hurdle and brought ‘Adele Dazeem’ onto the stage instead. At the Oscars the following year, Menzel responded by introducing Travolta onto the stage as ‘Glom Gazingo’.

12. Sacha Baron Cohen throws ‘the ashes of Kim Jong-il’ all over Ryan Seacrest 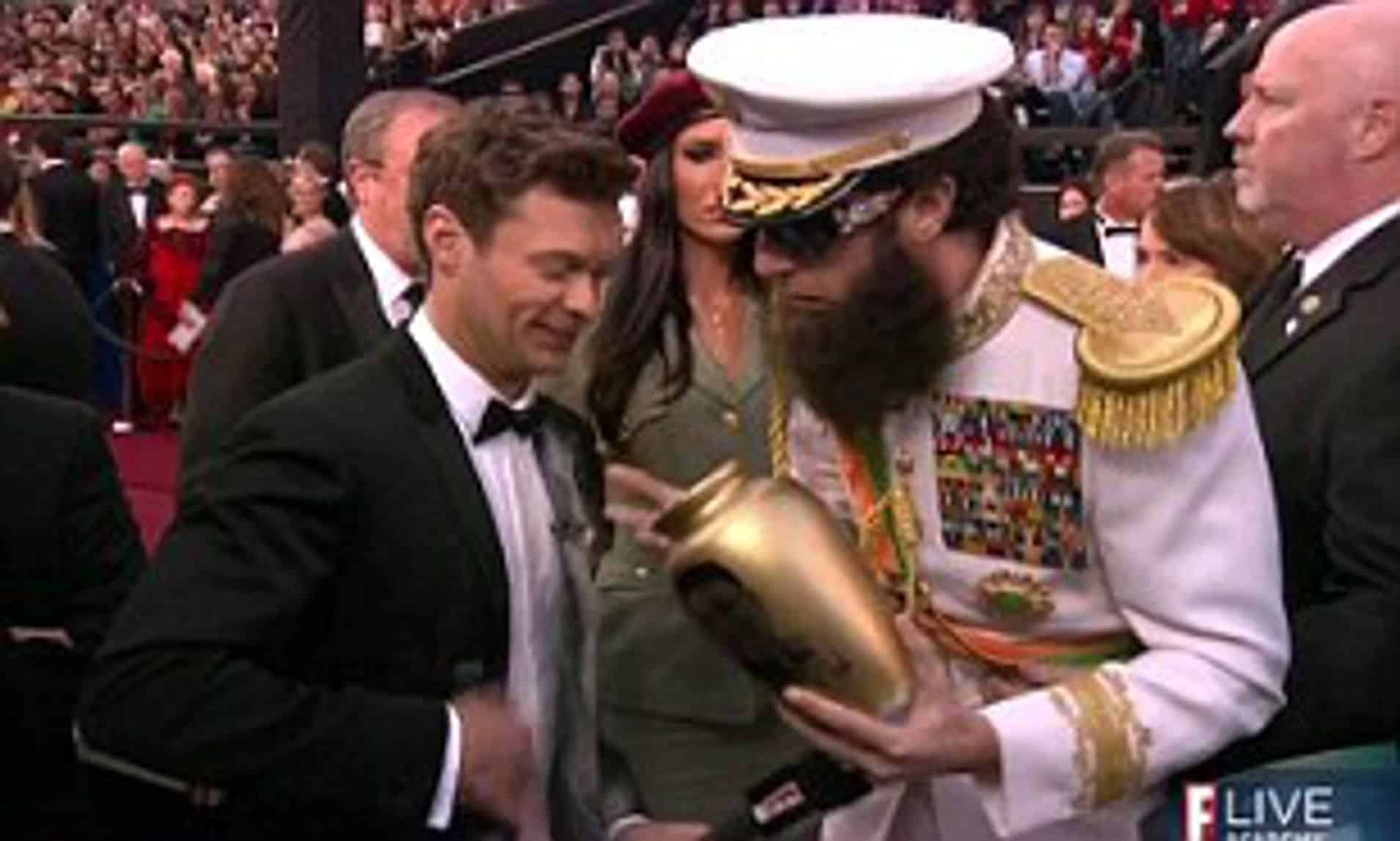 Sacha Baron Cohen doesn’t do awards shows, though the characters he plays do show up from time to time. Having done the MTV Awards as Bruno and Borat, and the Golden Globes as Ali G, in 2012 it was Admiral General Aladeen’s turn at the Oscars.

Aladeen, the star of Baron Cohen’s 2012 comedy The Dictator, was greeted on the red carpet by Ryan Seacrest. Initially, all seemed to go according to plan. Any plans Ryan Seacrest had gone out the window, however, when ‘Aladeen’ accidentally spilled an urn containing the ashes of Kim Jong-il all over the bemused E! reporter. 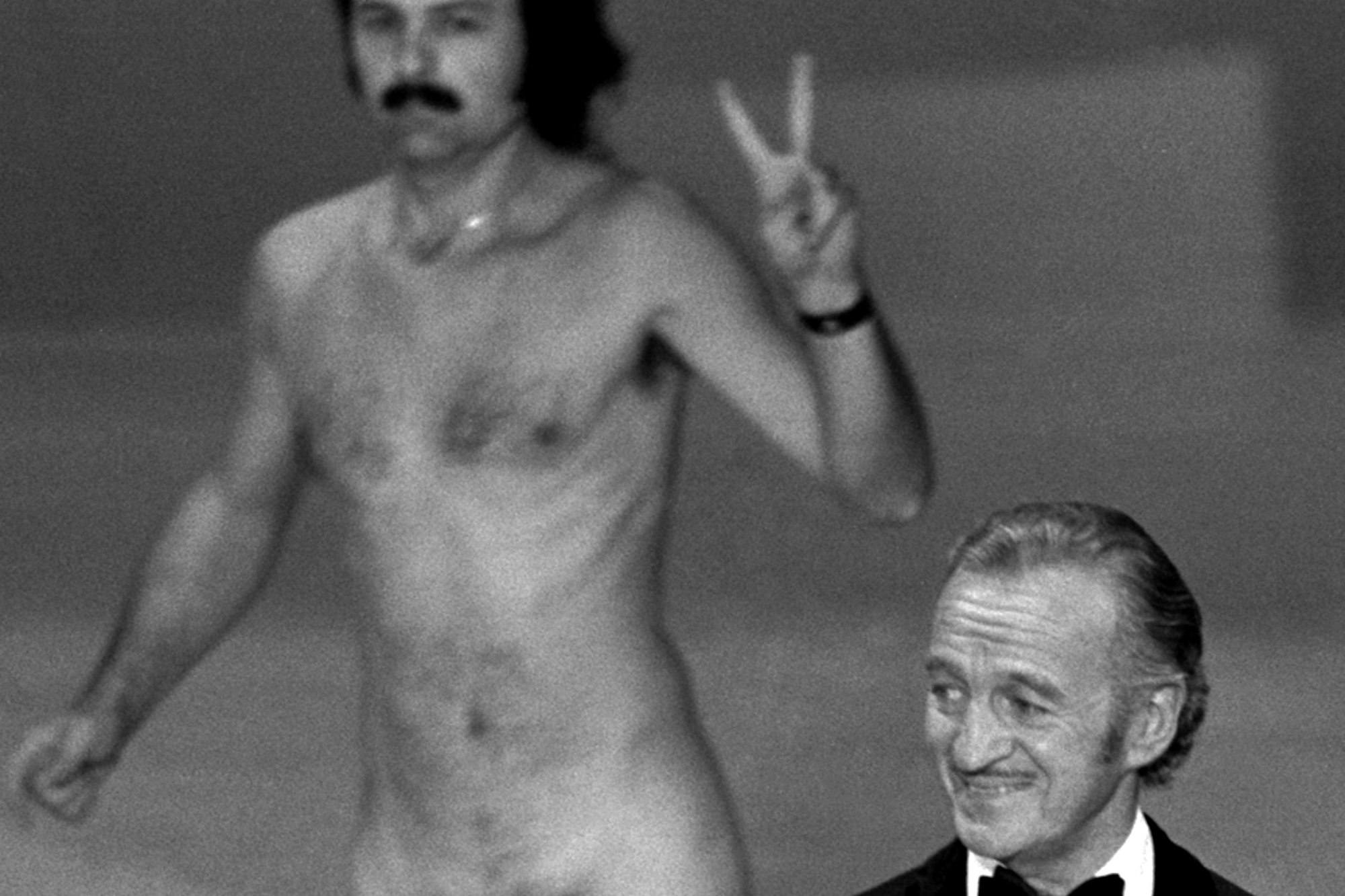 The 1974 Oscars, a year in which The Sting and The Exorcist won big, were fairly uneventful. That is, except for one small thing that happened during David Niven’s monologue introducing Elizabeth Taylor.

As Niven sang Taylor’s praises, a naked man ran behind the actor across the stage: ‘professional streaker’ Robert Opel. Barely fazed, Niven quipped: “Fascinating to think that probably the only laugh that man will ever get in his life is by stripping off and showing his shortcomings.”

10. Jennifer Lawrence falls on the way to collect her award 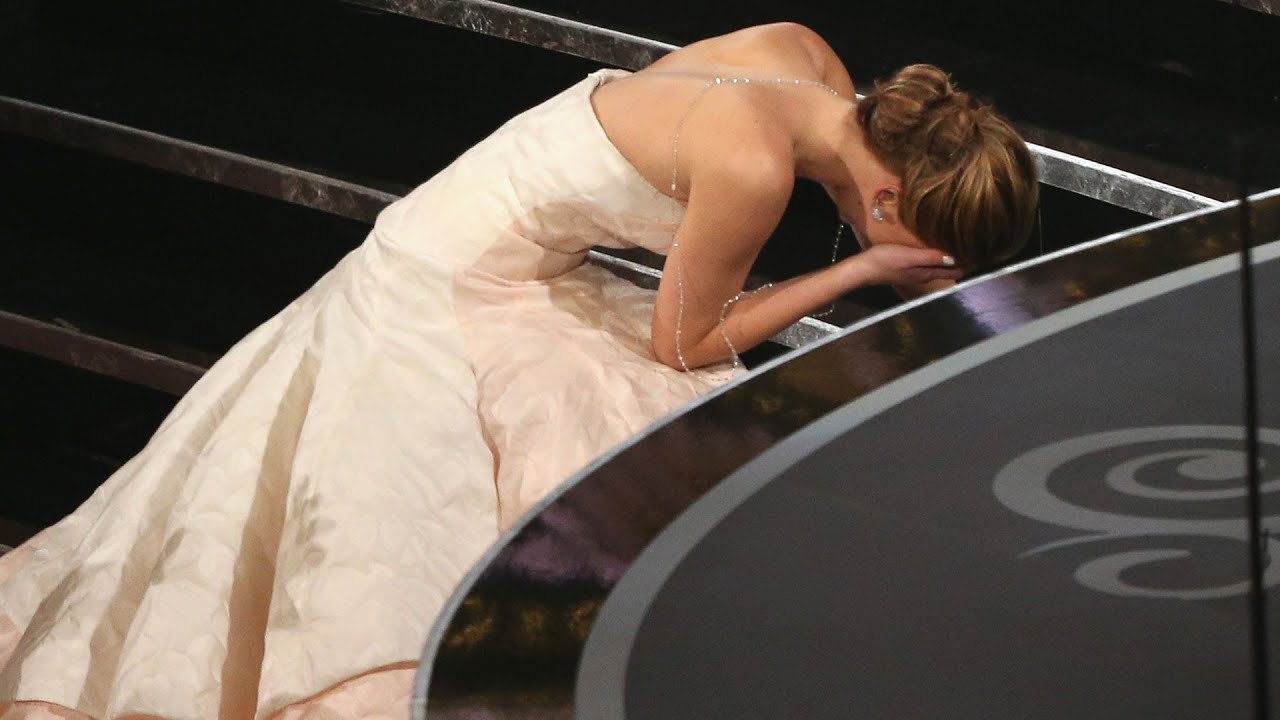 Jennifer Lawrence is no stranger to an awkward Oscars moment – see the video below of her being hit on by a 75-year-old Jack Nicholson for evidence. Not even that tops what happened to Lawrence during the actual 2013 ceremony, however. As she went to pick up her Oscar, for Best Actress for Silver Linings Playbook, Lawrence did what everyone dreads will happen to them in front of a live audience and promptly fell over.

Tripping over her dress, Lawrence was helped to the stage by presenter Jean Dujardin. She received a standing ovation, which she speculated was “just because you feel bad that I fell”.

9. Elinor Burkett does a Kanye 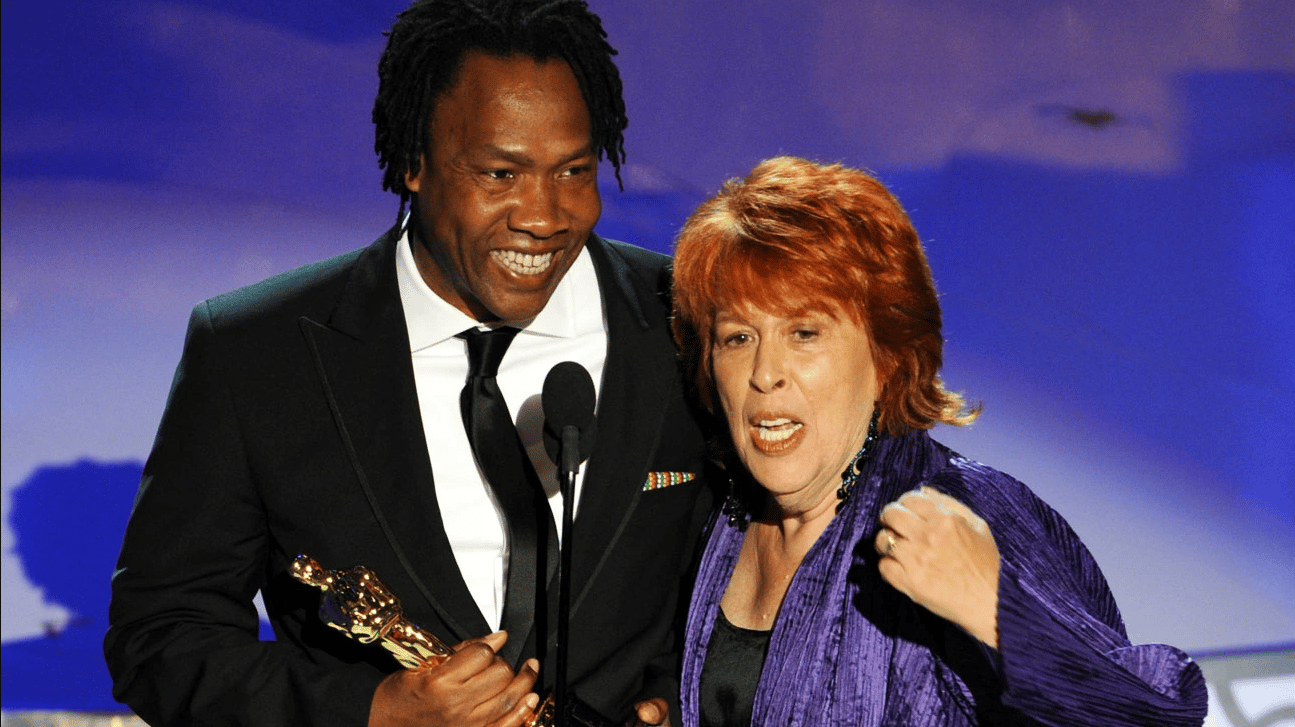 In 2010, the Oscars got a Kanye-interrupting-Taylor-Swift-style awkward moment all of its own. It all started so well: director Roger Ross Williams, nominated for Music by Prudence, was announced as the winner of the Best Documentary Short award.

As Williams was the first African-American to win an Oscar for any of the Short awards, his speech could have been a momentous one – if his co-producer Elinor Burkett hadn’t interrupted him. Only a few seconds into his speech, Williams was cut off by Burkett, who proceeded to make a very different speech than the one Williams had planned. 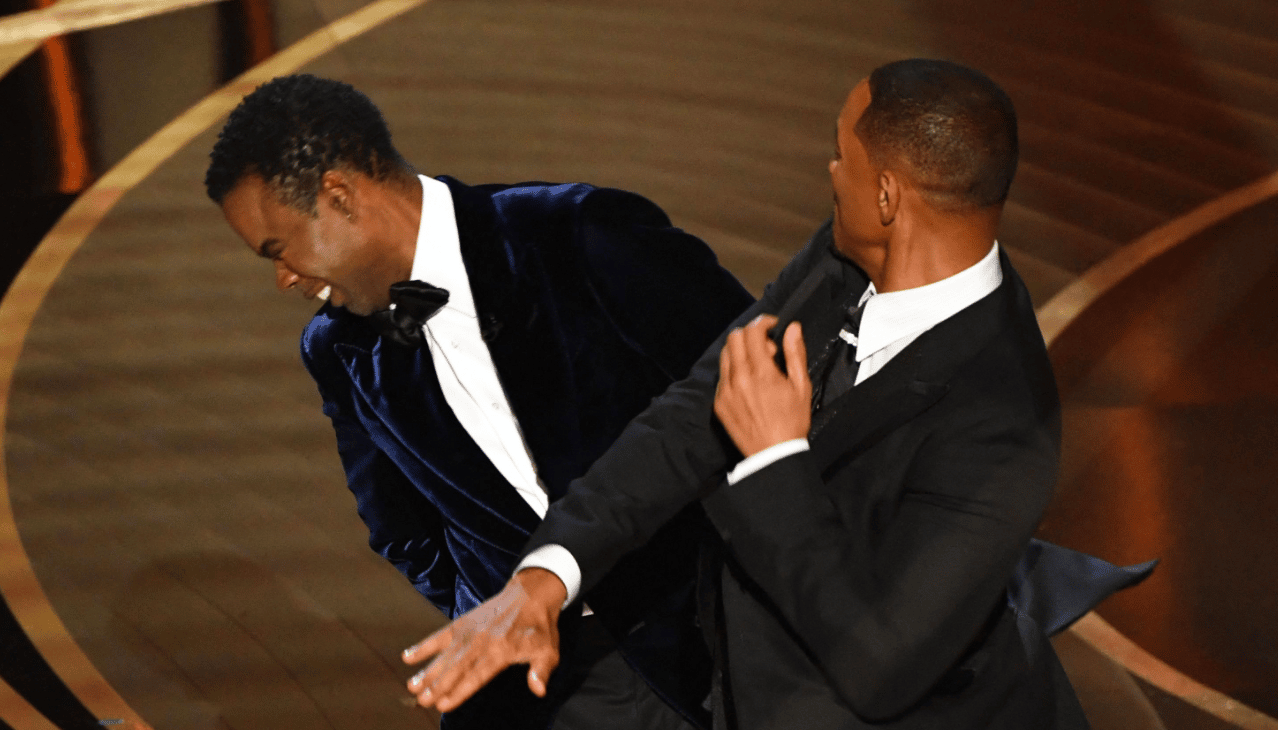 Now this is a story all about how the Oscars got flipped-turned upside down, and I’d like to take a minute, just sit right there – I’ll tell you how Chris Rock felt the hot vengeance of Will Smith’s open palm.

Yes, it’s hard to believe that such an illustrious and often stodgy event as the Academy Awards could feature actual violence, but that’s exactly what transpired at the 2022 Oscars. After Rock mocked Jada Pinkett-Smith’s alopecia, joking that she must have been working on a GI Jane sequel, Will Smith marched on to the stage, struck Madagascar star Rock square across the jaw, and twice loudly yelled “keep my wife’s name out of your f***ing mouth.”

Audiences in attendance and watching around the world were stunned, with many believing the incident to be a skit. However, given the well-publicised turbulence in Smith’s marriage, and a previous joke by Rock that compared his wife’s one-time Oscars boycott to being unable to “get into Rihanna’s panties – I wasn’t invited,” the slap appears to have been genuine.

To make matters even more bizarre, a tearful Smith later won Best Actor for King Richard. Having been calmed down off-stage by Denzel Washington, Smith noted in his acceptance speech that “I want to apologise to the Academy. I want to apologise to all my fellow nominees,” but pointedly did not include an apology to Chris Rock, who declined to press charges. Smith would later apologise to Rock on Instagram, but the damage was done.

7. Marlon Brando sends a Native American activist to collect his Oscar for him 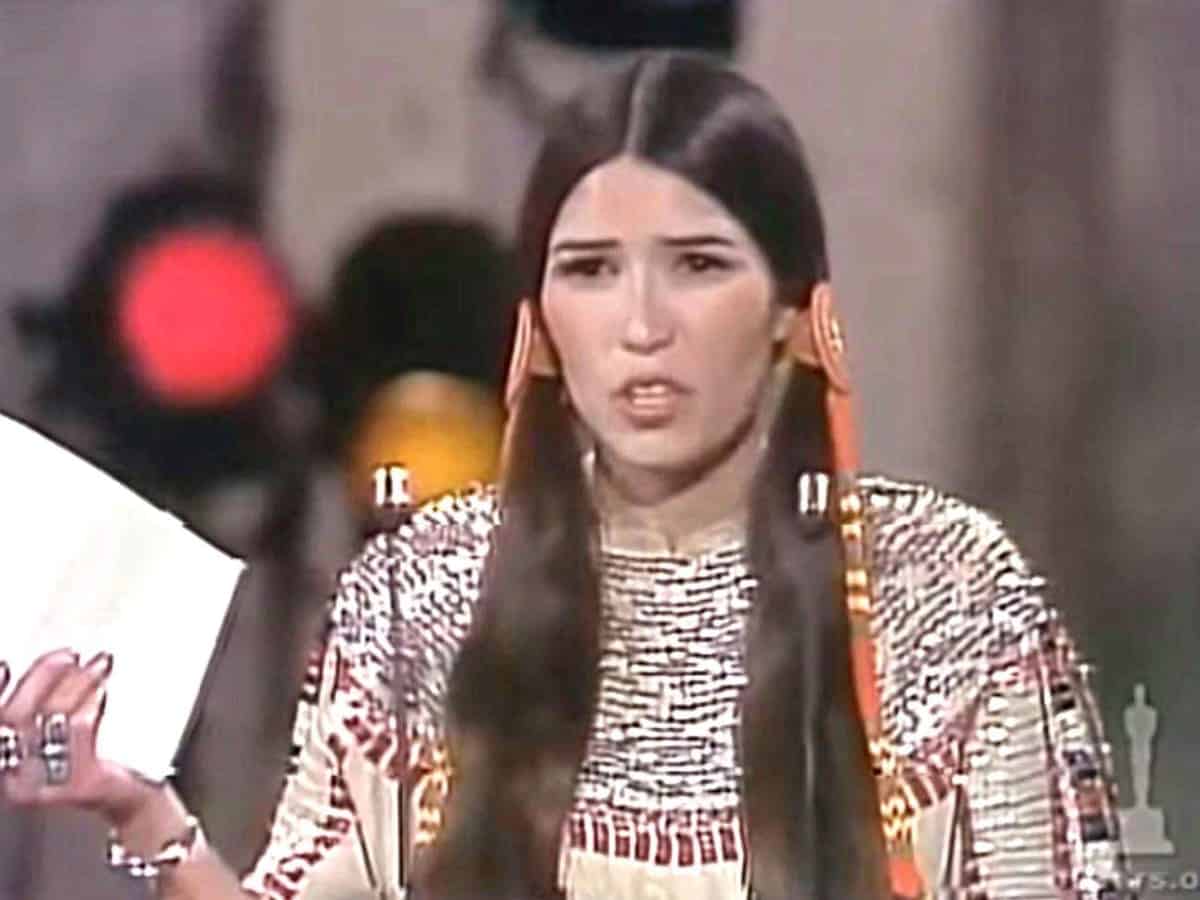 From the beginning, Marlon Brando never had any intention of doing what was expected of him as a movie star. So it went in 1973, when Brando was nominated for and a shoo-in to win the Best Actor Oscar at that year’s awards ceremony.

What Brando was inevitably announced as the victor, it wasn’t the big man himself who showed up, but a Native American activist known as Sacheen Littlefeather. Littlefeather took to the stage, declined to accept Brando’s Oscar – his second – and was met with a mixture of boos and applause.

6. Bjork lays an egg on the red carpet 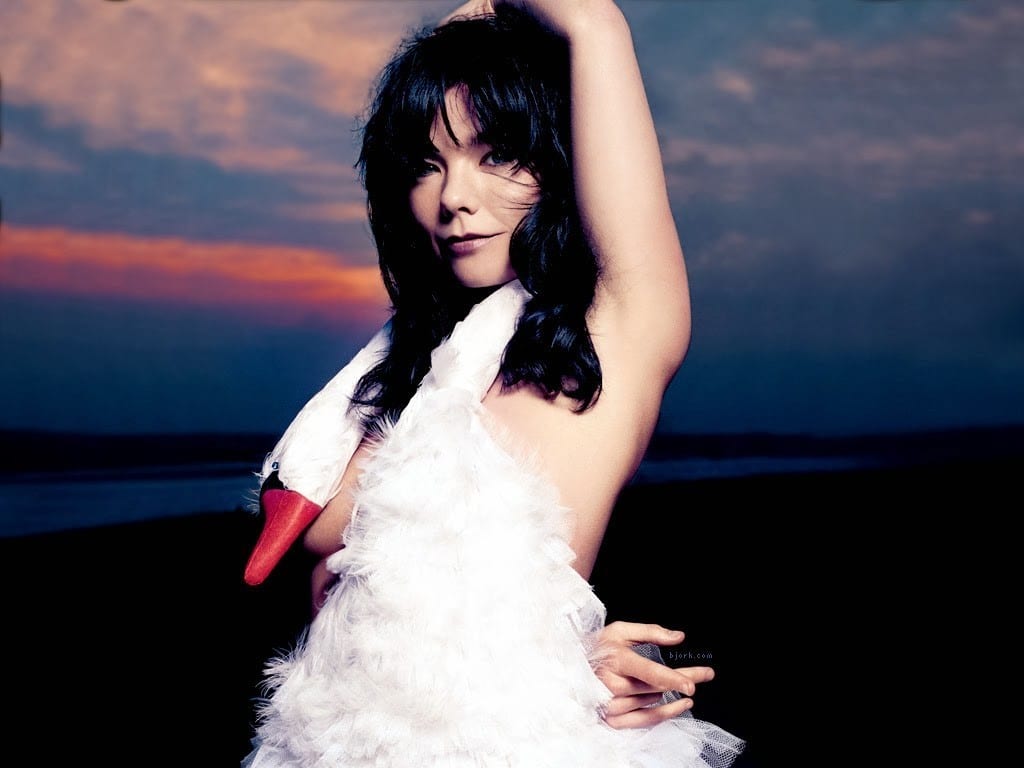 Fashion fails are ten-a-penny on the Oscars red carpet, with at least one sartorial disaster to feast your eyes on each year. It’s perhaps offbeat Icelandic musician Bjork who takes the prize in that department, however.

In 2001, Bjork was nominated for Best Original Song, for Dancer in the Dark’s I’ve Seen It All. For the occasion, Bjork appeared on the red carpet wearing a dress made to look like a swan. To cap the look off, the singer brought an ‘egg’ with her to drop on the carpet.

5. La La Land is announced as Best Picture by mistake 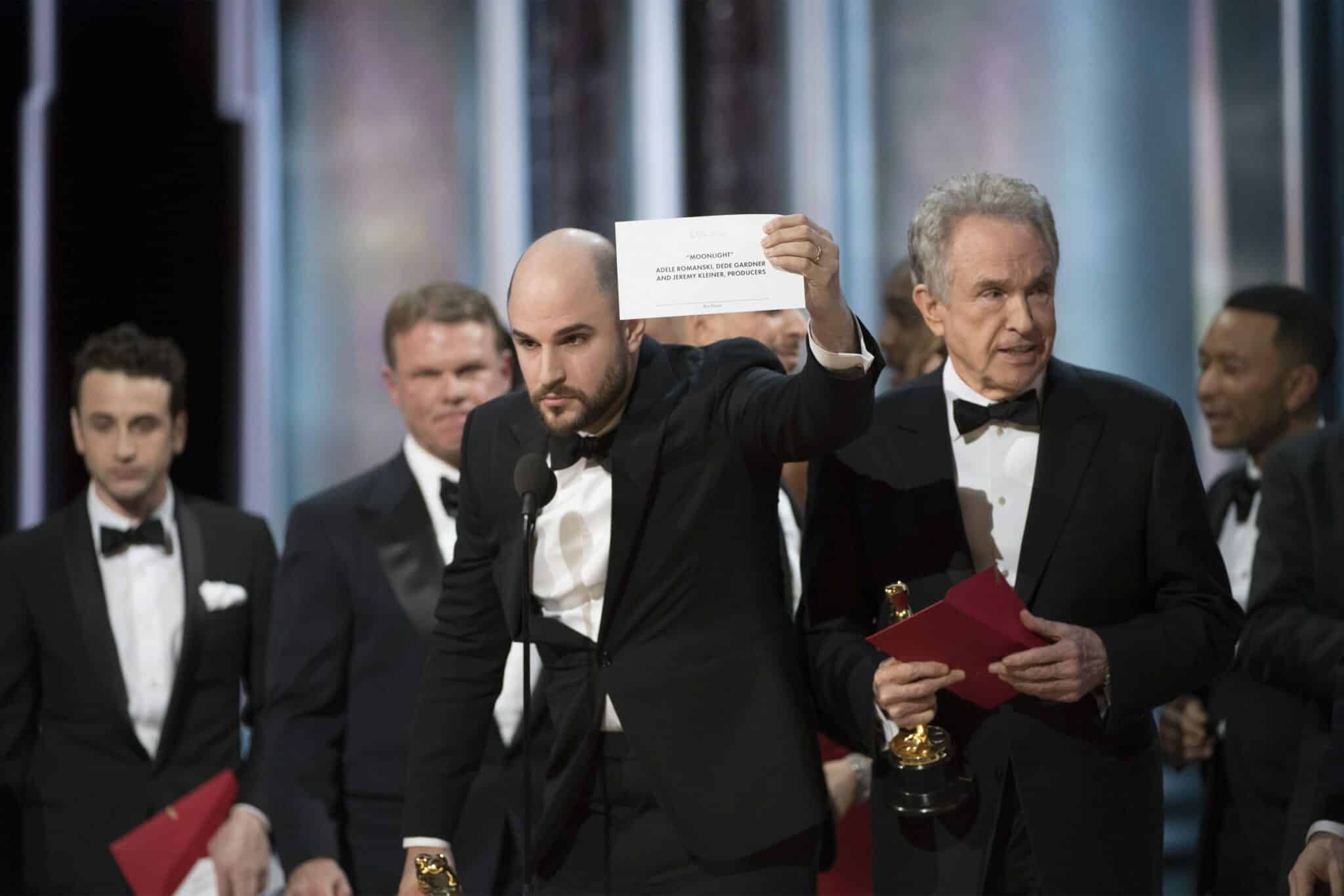 It’s the one that the Academy are still reeling from: the moment the unthinkable happened, and the wrong Best Picture was read out live on air. It was all the result of a mix-up – presenters Faye Dunaway and Warren Beatty being handed the wrong envelope, with ‘La La Land’ printed on the card instead of the real winner, Moonlight.

Cue La La Land’s cast and crew bounding onto the stage in apparent victory, and then chaos as Academy producers scrambled to inform the La La Land team of the mistake. Beatty and the show’s host, Jimmy Kimmel, could only make awkward attempts at damage control as the La La Land team was exchanged with Moonlight’s. 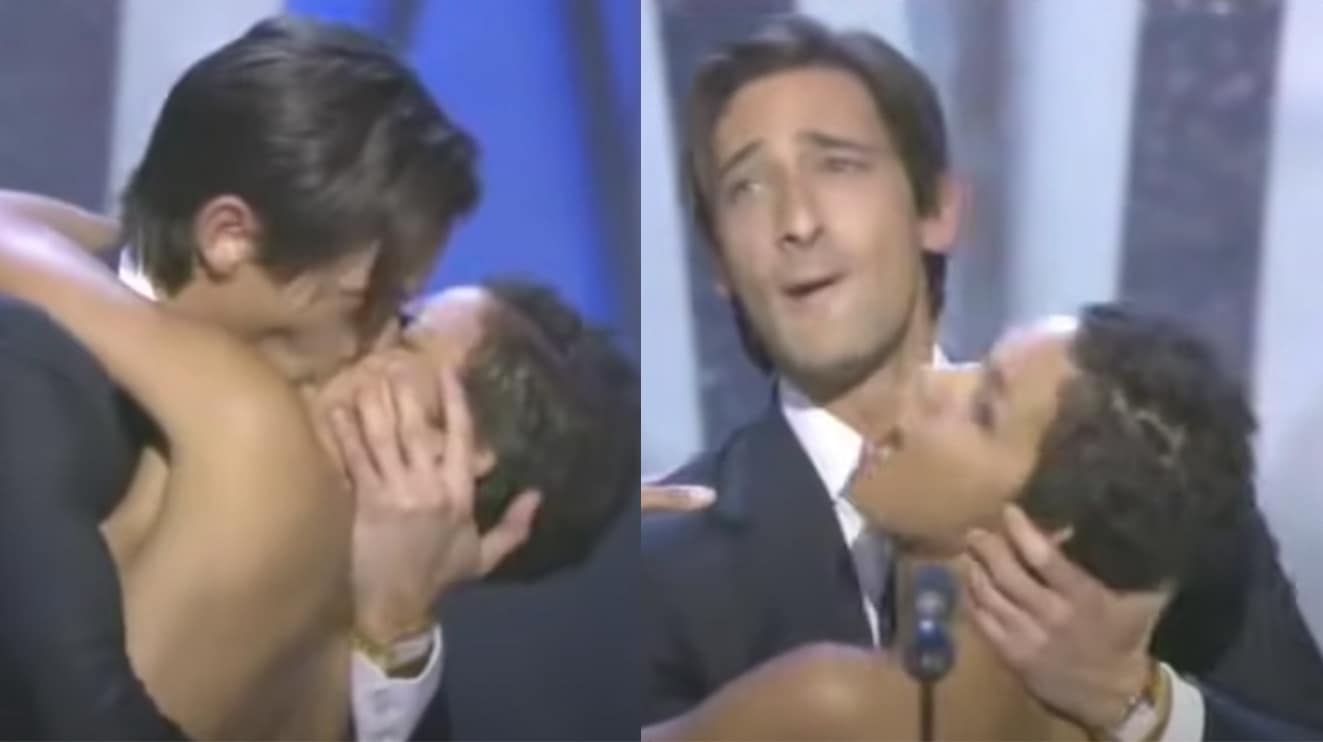 There are probably few moments in an actor’s life more euphoric than winning an Oscar, so it’s no surprise that some people get carried away. Though it is common for a winner to kiss their date, whether that means a peck on the cheek for their mother or a congratulatory smooch from their spouse, when Adrien Brody won the Academy Award for Best Actor, he went one step further.

As soon as Brody made it to the podium, he swept Halle Berry, who had just announced the winner, into an impromptu embrace. The kiss lasted so long that by the time he let Berry go, the prompter was allegedly already flashing for him to finish up his speech. Berry later said of the incident: “That was not planned. I knew nothing about it. I was like, ‘What the f–k is happening right now?’” 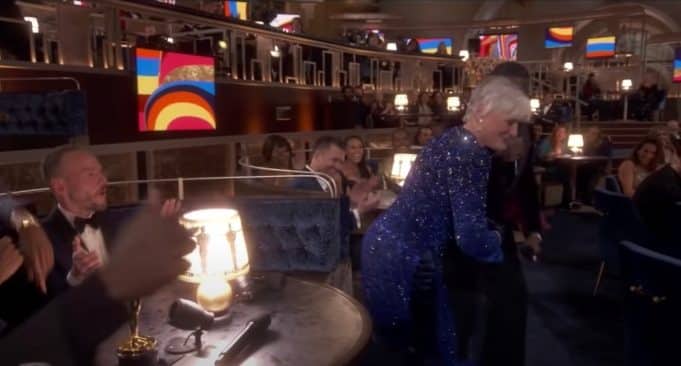 Glenn Close has had several legendary media moments throughout her decades-long, storied career, but her latest came in 2021 when she surprised everybody with her insider knowledge of late 80s funk music. During a break in the Oscars proceedings, a game of “name that song” was struck up, and actor Lil Rel Howery turned the mic on Close.

Though no-one expected the Fatal Attraction star to know the Experience Unlimited track Da Butt, Close easily rattled off the history of the song, from its inclusion on the Spike Lee movie School Daze’s soundtrack to its Lee-directed music video. However, she surprised the watching crowd even more by getting up and expertly demonstrating the iconic butt dance that accompanied the song. 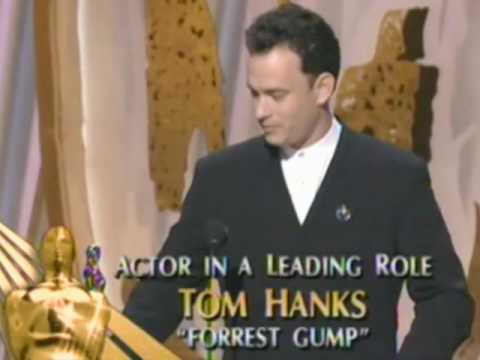 1994’s Philadelphia was a groundbreaking movie that explored the human cost of the AIDS crisis. However, nobody expected Tom Hanks’ acceptance speech following his Best Actor win for the film to go down in history in a similar way. Hanks’ touching speech eulogised AIDS victims like John Gilkerson, Hanks’ classmate and AIDS victim who died shortly before the broadcast, with the beautiful phrase: “The streets of heaven are too crowded with angels.”

Hanks also thanked his high school drama teacher Mr Rawley Farnsworth, calling him one of the “finest gay Americans” he had ever met. The tribute sent waves through the media, with many assuming Hanks had accidentally outed his teacher, but Hanks later confirmed that he had asked permission to mention his sexuality. As a result of the speech, Farnsworth became a prominent gay rights activist, even serving as the Grand Marshal in an Atlanta parade for children with H.I.V. 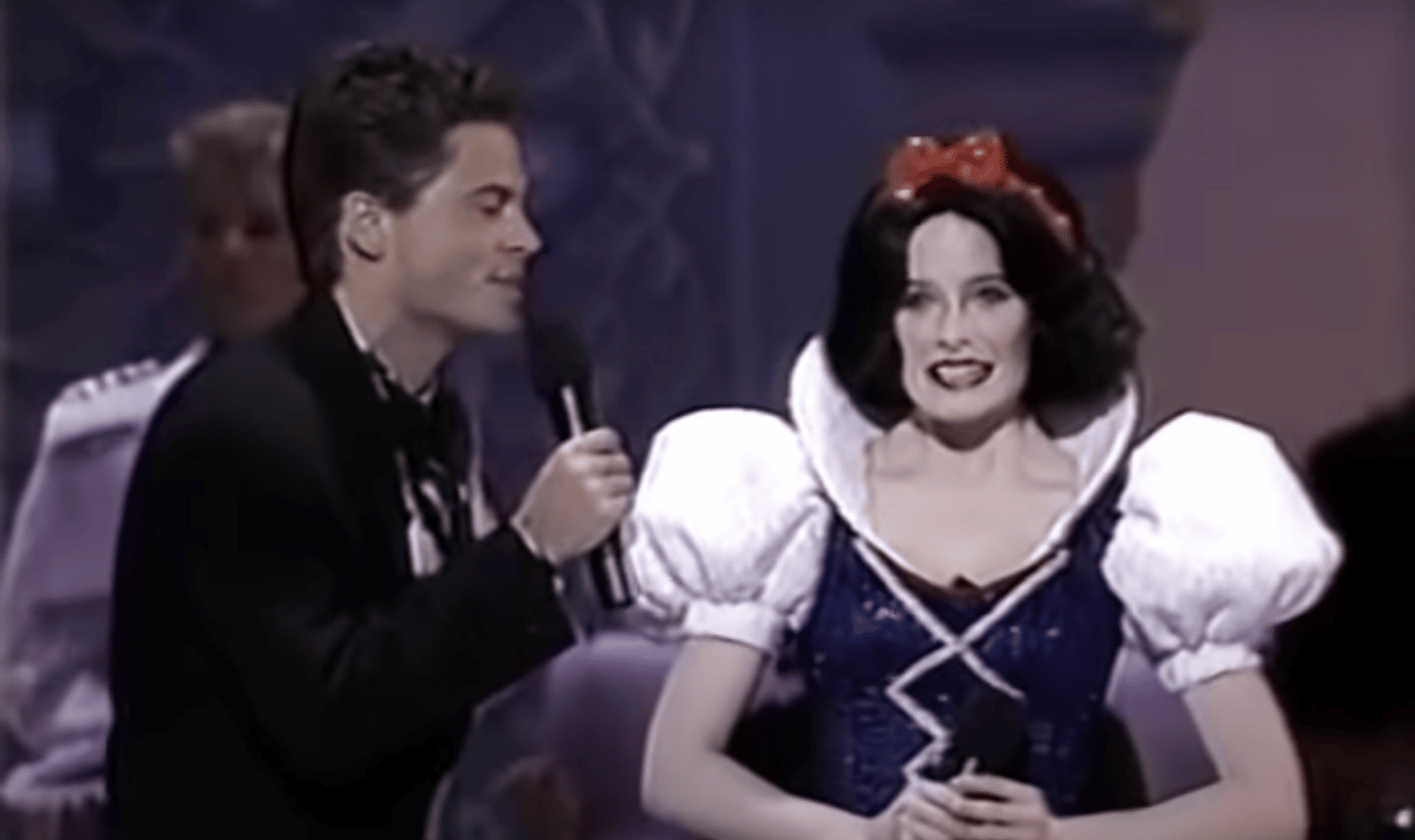 Every Oscars ceremony has moments that have the potential to become dated further down the line, but few moments have aged so poorly as the opening number of the 1989 Academy Awards. The brainchild of Grease creator Allan Carr, the bombastic number opened with a trilling actress dressed as Snow White shaking hands with the celebrity crowd, and ended with a parody of Proud Mary in which Rob Lowe desperately attempted to stay on pitch.

The number destroyed the careers of everyone involved, with Carr being shunned by Hollywood for the last decade of his life, the poor Snow White actress being forced to sign a 13-year long gag order, and Rob Lowe’s career not really recovering until Parks and Recreation. Only Vincent Price managed to maintain his dignity while people dressed as tables did a samba kickline behind him, and that was because he wasn’t required to say a word.