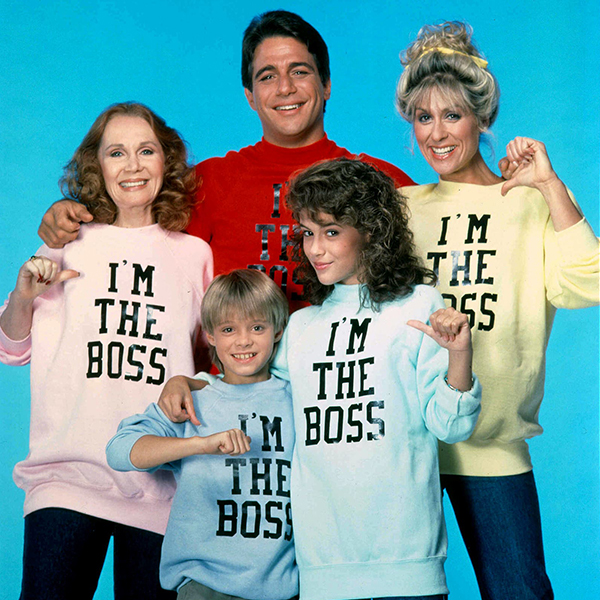 By the early 80s, the standard nuclear family structure and traditional gender roles (men go to work, women stay home) were no longer so readily accepted as the norm. This was addressed by Who’s the Boss?, a sitcom which brought together two single-parent families in a household where the standard gender roles are reversed.

Tony Micelli (Tony Danza, a sitcom veteran thanks to Taxi) is a retired baseball player who takes a job as a live-in housekeeper for advertising executive Angela Bower (Judith Light). Tony moves into Angela’s luxurious home with his daughter Samantha (Alyssa Milano), which they share with Angela’s son Jonathan (Danny Pintauro), with regular visits from Angela’s free-spirited mother Mona (Katherine Helmond). An unconventional family unit forms, and along with it a ‘will-they-won’t-they’ romantic tension between Tony and Angela.

Premiering in 1984, Who’s the Boss? became one of the most popular sitcoms of the time. From its second season to its fifth, it was in the top ten most watched TV shows in America. As well as keeping its adult stars in the public eye, the show also made a teen idol out of Alyssa Milano. Famously, Disney animators used the young actress as the basis for Ariel in 1989’s The Little Mermaid.

Who’s the Boss? ended in 1992 after 196 episodes. By this time it had formed the basis for British sitcom The Upper Hand, which ran from 1990 to 1996. Further Who’s the Boss? remakes have since been produced in Mexico, Germany and India, amongst others.

30 Hotties From Back In The Day