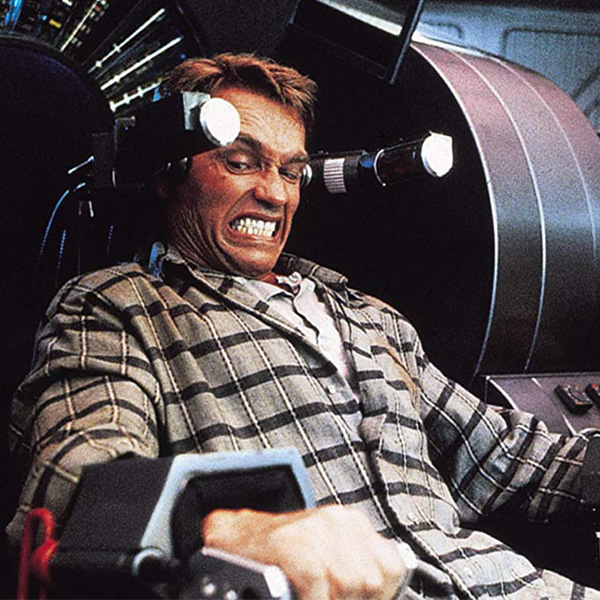 1987's RoboCop proved that Dutch director Paul Verhoeven had the chops to take on Hollywood spectacle, and when he teamed up with action icon Arnold Schwarzenegger for 1990's Total Recall, the result was the filmmaker's first true blockbuster.

In the late 21st century, Doug Quaid (Schwarzenegger) is a construction worker in a happy marriage with doting wife Lori (Sharon Stone), but dissatisfied with his lot in life, and haunted by recurring dreams of Mars, which has now been colonised. Quaid visits Rekall, a company who sell artificial memories, and orders the memory of a vacation on Mars; but something goes wrong, as it turns out Quaid already has a false memory implant - which encompasses his entire identity.

Dumbfounded, Quaid discovers he’s really Hauser, a Martian spy who defected to the planet's underground resistance. Suddenly under attack from mercenaries lead by the villainous Richter (Michael Ironside), Quaid follows the advice of a video of his former self, which tells him, "Get your a** to Mars!"

Loosely adapted from We Can Remember It for You Wholesale, a short story by Blade Runner creator Philip K. Dick, Total Recall had been in development for many years before it finally reached screens. Other directors attached early on included David Cronenberg, whilst Patrick Swayze and William Hurt were considered for the lead, before the project was retooled into something more befitting action superstar Schwarzenegger.

Total Recall was one of the most expensive films ever made at the time, with a budget in the region of $60 million. It also boasted a ground-breaking CGI sequence showing human skeletons through a digital X-ray scanner; this scene would help the film land the Best Visual Effects Oscar.

Total Recall was also notable for introducing director Paul Verhoeven to actress Sharon Stone; the two would reunite on 1992's Basic Instinct, which made Stone one of the most sought-after actresses of the 90s.

Grossing a mighty $261 million, Total Recall became Schwarzengger's biggest hit to date (although Terminator 2 would eclipse that record the following year). A sequel script was written based on another Philip K. Dick story, The Minority Report; this would eventually be reworked into Steven Spielberg's 2002 film with Tom Cruise. There was also a short-lived TV spin-off, and a Total Recall remake starring Colin Farrell in 2012.

20 Things You Might Not Have Realised About Total Recall