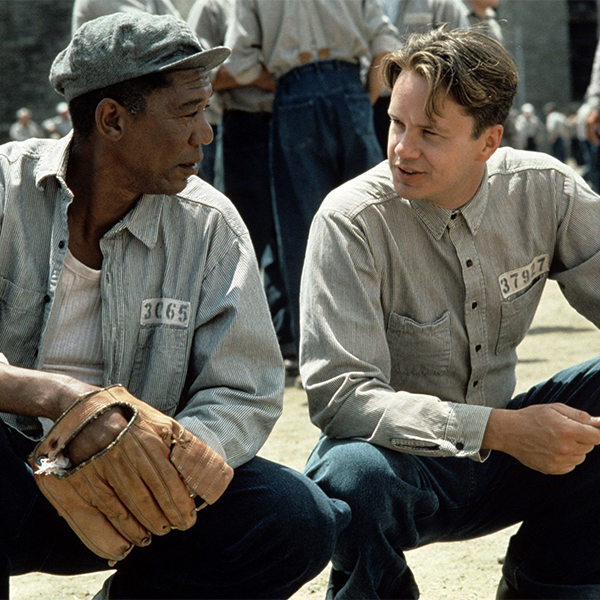 Director Frank Darabont made his directorial debut with this 1994 adaptation of Stephen King's novella Rita Hayworth and the Shawshank Redemption. Though largely overlooked on release, the film's reputation grew with time, and it wasn't long before many were declaring it one of the greatest films ever made.

In 1947, Maine banker Andy Dufresne (Tim Robbins) is found guilty of murdering his wife and her lover, and is sentenced to life imprisonment at Shawshank State Penitentiary. Here. he befriends fellow lifer Red (Morgan Freeman), and struggles to adapt to his new home - all the while quietly plotting his escape.

Released in September 1994, The Shawshank Redemption wound up flying largely under the radar, overshadowed by the critical and commercial success of Forrest Gump and Pulp Fiction. With initial box office takings of $16 million, the film was declared a flop; but after garnering a number of Oscar nominations (although no wins), it was re-released to greater success. However, it was on home video and TV that The Shawshank Redemption really found its audience.

Along with 1986's Stand by Me, The Shawshank Redemption is one of the most acclaimed Stephen King adaptations, and both films helped the wider audience and critical community recognise that King was a lot more than just a pulp horror novelist.

Whilst Tim Robbins drew much acclaim for his performance, most would agree that the film really belongs to Morgan Freeman, thanks both to his performance and the evocative narration he provides. Although Freeman gets second billing, his performance landed him a Best Actor Oscar nomination, and helped propel him on to a successful leading man career in the years ahead: such hits as Seven, Kiss the Girls and Along Came a Spider followed.

Despite the massive praise his first film garnered, Frank Darabont hasn’t had the most prolific directing career. Of the three further films he’s directed, two of those – 1999’s The Green Mile, and 2007’s The Mist – were also Stephen King adaptations. Darabont went on to enjoy greater success on television, as the initial showrunner on smash hit horror series The Walking Dead.

20 Facts You Never Knew About The Shawshank Redemption