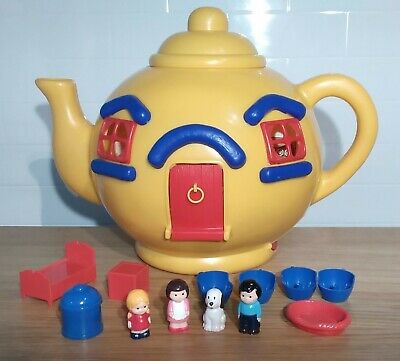 Often erroneously referred to as a Fisher-Price product, the Big Yellow Teapot House was in fact the creation of British toy manufacturer Bluebird; launching in 1980, the Teapot was the company's first product.

Resembling a traditional teapot, the toy can be opened up to reveal a living space with wallpaper and furniture. In the other half of the teapot is a bedroom and an access point for a car.

Populating the teapot are several miniature figures, including a dog and two blonde-haired children. These are stored in the top of the teapot, which can be lifted up.

Bluebird and the Teapot were conceived by Sir Torquil Patrick Alexander Norman, a 6'7" nobleman who was also a pilot and investment banker.

The Teapot was one of the first 'container houses', eschewing the typical dollhouse architecture in favour of a more whimsical design. It would later be joined in the company's 'Big' range by the Big Red Fun Bus and Big Jumbo Fun Plane.

As a result of these initial products, Bluebird was a roaring success, turning over £1.25 million in its first year and coming within £18,000 of breaking even. However, the company's revenue quickly began to thin.

It was saved by a worldwide phenomenon: Polly Pocket, introduced in 1989. Bluebird would be acquired by toy giant Mattel in 1998. Sir Torquil Patrick Alexander Norman has since become a collector of classic planes.

15 Toys From Your Childhood That You Will NEVER Forget