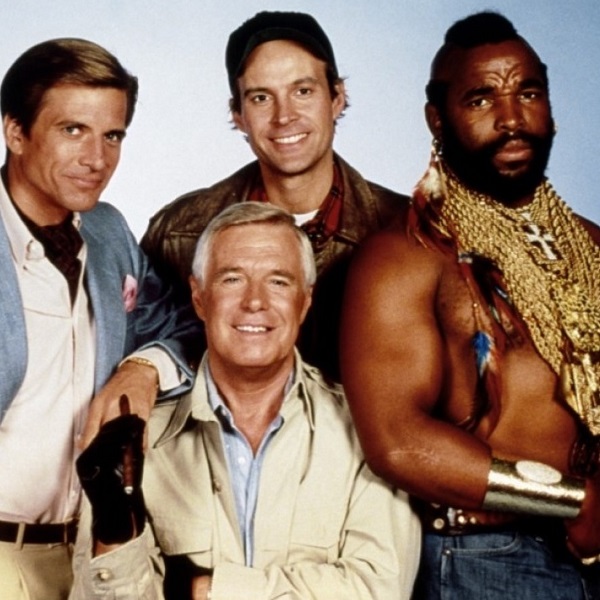 The 80s is remembered for its wealth of militant tough guys, exemplified on the big screen in the films of Arnold Schwarzenegger and Sylvester Stallone. However, if you asked any kid at the time who their biggest heroes were, in all likelihood the answer would be The A-Team.

Our four heroes are John 'Hannibal' Smith (George Peppard), Templeton 'Faceman' Peck (Dirk Benedict), Bosco 'B.A.' Barracus (Mr. T), and 'Howling Mad' Murdock (Dwight Schultz). Formerly a US Army Commando unit during the Vietnam war, they were falsely imprisoned for - as the opening voiceover told us - "a crime they didn't commit." After escaping, they became soldiers for hire in LA, always ready to come to the aid of those in need.

For children of the 80s, The A-Team defined what it was to be a man of action. Our heroes carried the heaviest firepower and drove the coolest vehicles: there wasn't a kid around at the time who didn't want to ride in their signature black GMC van with the red stripe, although riding shotgun in Face's white Corvette would come a close second on that childhood wish list.

The A-Team were fast talkers too, never short of a wisecrack. It just wasn't a proper episode without Hannibal declaring "I love it when a plan comes together," or the notoriously aviophobic B.A. objecting, "I ain't gettin' on no plane!" However, although Mr. T is closely associated with the line "I pity the fool," he never actually said these words as B.A. Baracus; this line came from his earlier role as Clubber Lang in the film Rocky III.

Still, while The A-Team packed the most explosive, high-octane entertainment kids at the time had ever seen, it was a slightly odd spectacle given that almost no one ever got shot, or badly hurt at all. Despite this, The A-Team was still highly controversial, many critics complaining it glamorised violence.

The A-Team ran for 98 episodes, from 1983 to 1987. 23 years later a big screen take on The A-Team arrived with Liam Neeson, Bradley Cooper, Quinton 'Rampage' Jackson and Sharlto Copley taking over as everyone's favourite soldiers of fortune. A small screen reboot was announced in 2015, but has yet to materialise.

20 Things You Probably Didn’t Know About The A-Team