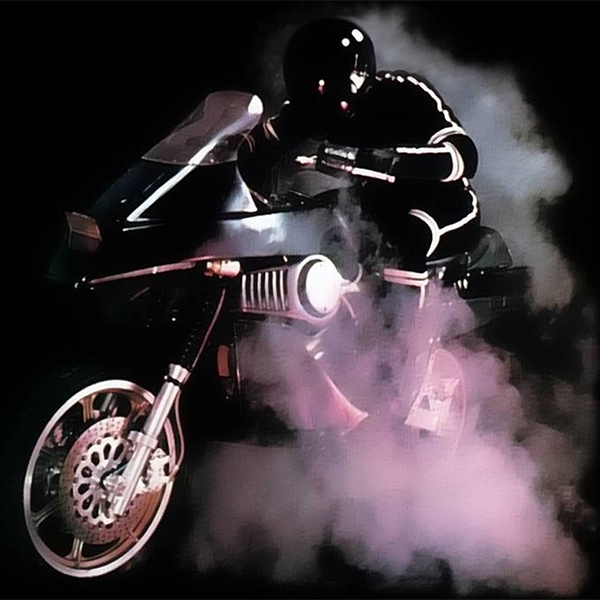 Knight Rider and Airwolf proved that 80s TV audiences loved a bit of super-charged vehicular action with a secret agent twist - so why shouldn't that work on two wheels? 1985 action series Street Hawk set out to give us just that, and though it sadly proved short-lived, it still made a big impact on viewers at the time.

Rex Smith took the lead as Jesse Mach, a cop and expert motorcyclist who  leads a double life as crimefighter Street Hawk, part of a top secret government project utilising a high-tech motorcycle. Under a sleek black biker suit and helmet, Jesse battles local criminals, as well as evading his own police colleagues who consider Street Hawk a vigilante menace.

With its shadowy, neon-lit title sequence, synthesizer-based soundtrack from electronica pioneers Tangerine Dream, and of course its abundance of extravagant bike chases (utilising specially customised Honda models), Street Hawk was compelling viewing, particularly for excitable younger viewers. It may be surprising, then, that only 13 episodes were ever made; but, not unlike Knight Rider, Airwolf and others of its ilk such as Automan, fans most vividly remember Street Hawk for its central vehicle and action sequences, rather than anything plot or character-related.

Rex Smith didn’t get much time to make a big impression, but he was an engaging lead, and was joined by some notable guest stars: the pilot featured Christopher Lloyd, whilst the second episode boasts an early appearance by George Clooney.

Remember Rex Smith From Street Hawk? Here’s What He Looks Like Now!

12 Street Hawk Facts That Every Fan Should Know