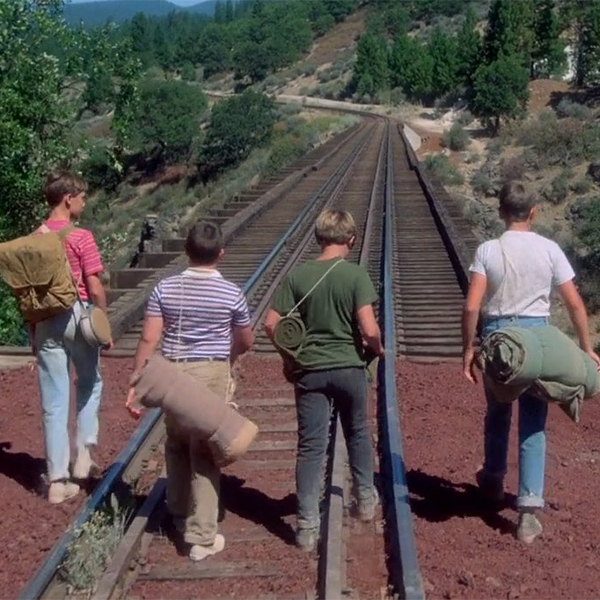 Thanks to such films as E.T. and The Goonies, the 80s was a great decade for films about kids. 1986's Stand by Me is another film of that ilk, but very different in tone and content; rated R, with coarse language and often distressing subject matter, it's really not for kids, even if the central characters are all aged 12. Even so, it's one of the best, most moving films about childhood ever made.

Set in Oregon in the summer of 1959, Stand by Me centres on young friends Gordie (Wil Wheaton), Chris (River Phoenix), Teddy (Corey Feldman) and Vern (Jerry O'Connell). Hearing tell that a local teen was hit by a train and killed some miles out of town, the boys decide to venture out there in search of the body in hopes of becoming local heroes. However, the journey that ensues proves to be one of great self-discovery for all four of them.

Stand by Me proved to be a major breakthrough movie for many of those involved. For one, it was adapted from Stephen King's novella The Body, helping the wider audience realise there was more to the author than the horror novels with which he was most closely associated.

In addition, it was a major turning point for director Rob Reiner, then still best known as a sitcom actor and director of 1981's This is Spinal Tap. The success of Stand By Me proved his versatility, paving the way for such later hits as The Princess Bride, When Harry Met Sally..., A Few Good Men and Misery. The last of these is another King adaptation, and Reiner named his production company - Castle Rock Entertainment - after King's fictional Oregon town, where Stand by Me is also set.

Above all, though, Stand by Me is renowned for boasting four of the best child actor performances ever from its central cast, all of whom went on to successful careers (elder actors Kiefer Sutherland and John Cusack also make an impression). There’s a particular poignancy to the masterful performance of River Phoenix, who died a mere seven years after Stand by Me was made.

20 Things You May Not Have Realised About Stand By Me

Stand By Me: 20 Things You Never Knew About The Stephen King Classic