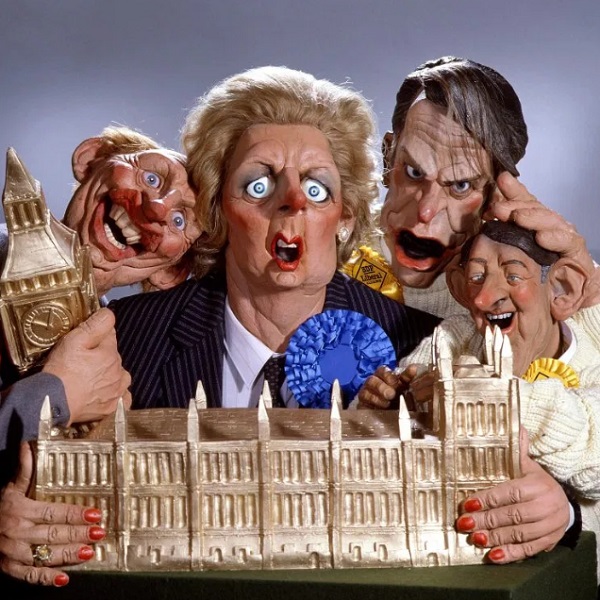 The 80s were turbulent years politically - and the best way for entertainers to react to political turmoil is with satire. Spitting Image delivered this in the form of an adult-oriented puppet show, which became one of the most distinctive British TV comedies ever.

Spitting Image creators Roger Law and Peter Fluck were newspaper cartoonists who hit upon the idea of making live action caricatures with latex puppets. Once ITV launched the series in 1984 it became a sensation, thanks to its bold send-ups of the Royal Family, world leaders Ronald Reagan and Margaret Thatcher, and other politicians of the day including opposition figures like Neil Kinnock.

Not that Spitting Image only went after political figures, as actors, sportspeople and other celebrities were all fair game. Interestingly, many of those targeted were happy to be sent up: rock group Genesis used their Spitting Image puppets in the music video for their 1986 single Land of Confusion. Nor was this the only musical impact of Spitting Image, as the series also produced a satirical pop chart hit, The Chicken Song, in 1986.

While the puppets were the stars, a wealth of British comedians provided the voices including Harry Enfield, Rory Bremner, Steve Coogan, Alistair McGowan and Chris Barrie. The series ran until 1996, when decreasing ratings saw ITV pull the plug.

After a number of aborted revival plans, a new take on Spitting Image is now confirmed to be in the works for UK streaming service Britbox.