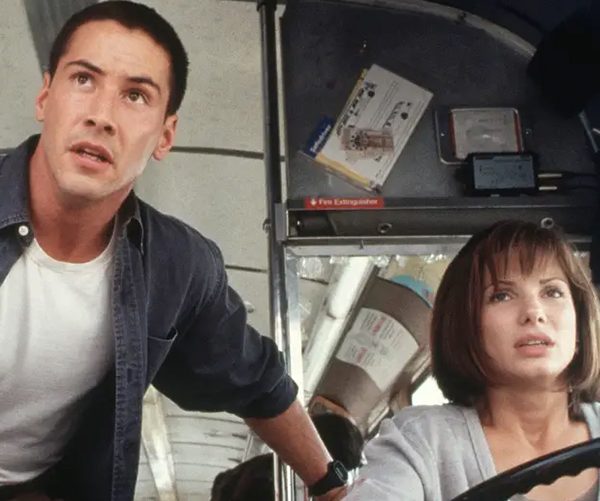 1988's Die Hard changed the game for the action genre, leaving every studio in Hollywood scrambling to produce similarly intense thrillers set primarily on a single day in a single location. Many of these movies never managed to be anything more than pale imitations of Die Hard -  but one which stood apart and became a classic in its own right was 1994's Speed.

Keanu Reeves is Jack Traven, an LAPD SWAT officer who, alongside his partner Harry (Jeff Daniels), foils the plot of deranged would-be elevator bomber Howard Payne (Dennis Hopper). Believing Payne to have been killed in the failed plot, Jack is later shaken when he receives a call from the very much alive Payne, warning him there's a bomb on a bus that will detonate if the vehicle drops below 50 miles per hour.

Written by Graham Yost, Speed was initially offered to Die Hard director John McTiernan, who passed as he felt it was too similar to his earlier project - and instead recommended Jan de Bont, Die Hard's cinematographer, who would make his directorial debut on the film. De Bont developed the script with Yost, hiring an uncredited Joss Whedon (soon to find fame with TV's Buffy the Vampire Slayer) for extensive rewrites.

Speed was Keanu Reeves' second action role following 1991's Point Break, although he was only cast when first choice actor Stephen Baldwin turned it down. It was on this film that Reeves got more hands-on with action, doing a number of his own stunts, most notably the jump from the Jaguar to the bus. This helped develop Reeves' reputation as a serious action man, which would be cemented by 1999's The Matrix and, later, the John Wick movies.

The role of Annie went through a number of reworkings, originally offered to Halle Berry and Ellen DeGeneres before Sandra Bullock was cast. This role went a long way to establishing Bullock as a major female star, and soon she'd rival Julia Roberts for the crown of top leading lady of the 90s.

With box office taking of over $350 million and great reviews, Speed was a huge hit. Alas, the same can't be said for 1997 sequel Speed 2: Cruise Control, a notorious misfire which Reeves was wise enough to pass on.