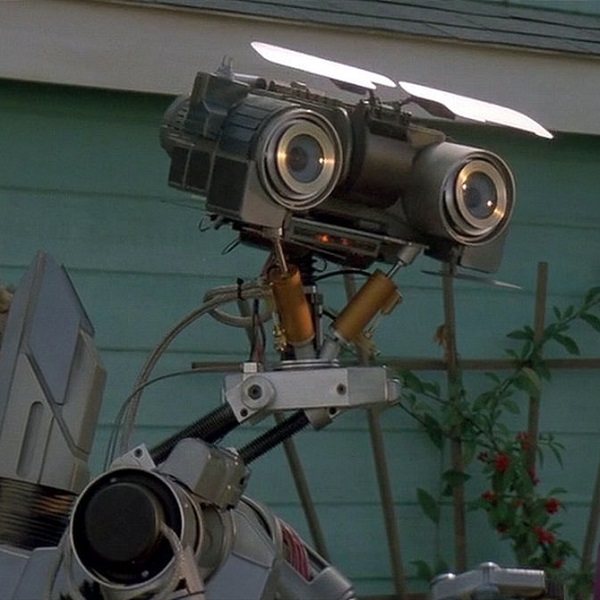 What if a robot suddenly came to life and developed a mind of its own? This was the question asked by 1986 sci-fi comedy Short Circuit, which provided us with one of 80s cinema's cutest robots outside of the Star Wars saga: Number 5, aka Johnny 5.

As his name suggests, Number 5 is on of a quintet of military robots built by weapons manufacturer NOVA, which malfunctions and disappears after being struck by lightning. Robot designer Newton Crosby (Steve Guttenberg) and his assistant Ben Jabituya (Fisher Stevens) head out in pursuit of Number 5, but not before the lost robot meets animal-loving Stephanie (Ally Sheedy), who teaches the robot about the beauty of the world, and comes to the astonishing realisation that Number 5 is alive.

Sheedy and Guttenberg bring human star power to the movie, but the show is stolen by Number 5, a state of the art animatronic creation for the time, voiced by actor Tim Blaney. Though popularly remembered as Johnny 5, the robot only renames himself in the film's final moments; the character’s association with that name comes from the sequel, plus the fact that the Short Circuit theme song by El Debarge is entitled Who’s Johnny.

Though Short Circuit was only a modest box office hit (takings of $40 million), Tim Blaney and Fisher Stevens would return for 1988 follow-up Short Circuit 2. Both films are controversial today due to Stevens’ performance, as the white actor portrayed an Indian character under heavy make-up.