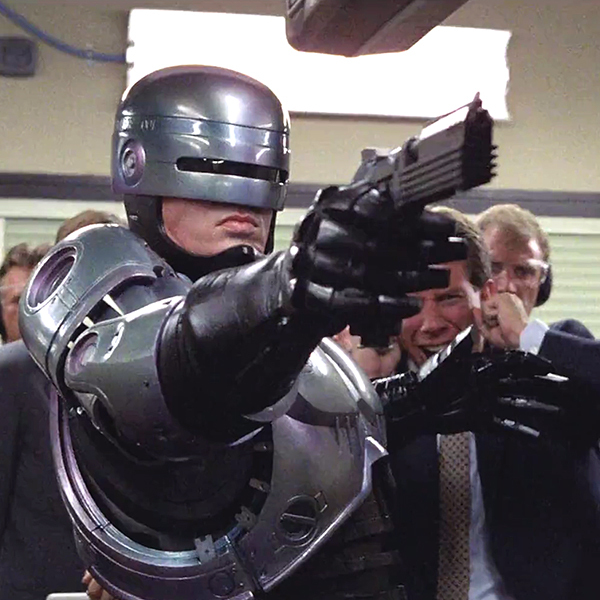 One might think that a movie about a murdered cop brought back to life as a cyborg would be all kinds of stupid. However, as cartoonish as its core concept might be, 1987's RoboCop is probably the smartest action movie of the decade, and - like all the best sci-fi - it may be set in the future, but it's really a reflection on the times in which it was made.

At an unspecified future date, the city of Detroit is largely controlled by corporation OCP, which owns the police. In the face of rising crime, OCP executive Bob Morton (Miguel Ferrer) pitches a bold new project: RoboCop, a cyborg police officer. However, to build him they first need a human cop, and they find their subject in Alex Murphy (Peter Weller), a principled officer gunned down in the line of duty.

Saved at the point of death, Murphy is rebuilt as a heavily armoured super-cop, with his memory erased and new directives programmed into his mind. Once put out on the beat, RoboCop makes a sensation - but soon, flashes of the dead man's memory start returning, particularly once he comes face-to-face with the criminals who 'killed' him.

RoboCop established Dutch director Paul Verhoeven as a force to be reckoned with in Hollywood. The level of violence and bloodshed on display is surprising even now, and Verhoeven's name would soon be synonymous with the extreme with his later films Total Recall, Basic Instinct, Showgirls and Starship Troopers.

But despite all the bullet-ridden carnage, what really hits hardest in RoboCop is its satirical sense of humour. OCP and its sleazy executives are a bald-faced attack on the profit-fixated yuppie culture that was so predominant in the 80s; Ronny Cox and Miguel Ferrer both relish in playing such venomous characters, although Kurtwood Smith largely steals the show as the deranged criminal Clarence Boddicker.

Though not a huge hit on release (earning $53.4 million in cinemas), RoboCop became a popular sensation, spawning two sequels, a live-action TV show and - controversially - a children's animated series. In 2014 a RoboCop remake hit cinemas, but this hasn't stopped plans for a direct sequel to the original, RoboCop Returns, which is currently in development.