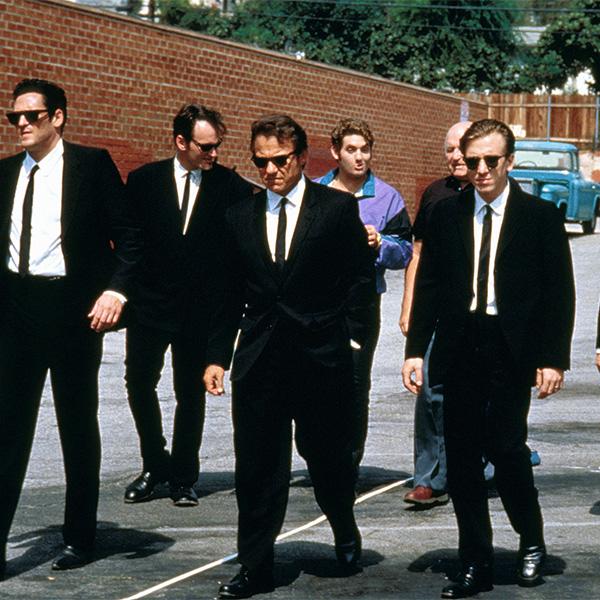 While the 80s had been a tremendous time for high-octane blockbuster movies, there was a pointed decline in the more individual, personal, director-driven cinema that had largely defined the 70s. However, when Quentin Tarantino showed up with 1992's Reservoir Dogs, it signalled a clear change in the wind for American independent film in the new decade.

As the film begins we're introduced to a group of men, all clad in black suits and white shirts, in an innocuous conversation which goes from the meaning of Madonna's song Like a Virgin, to the merits of tipping waitresses. Next thing we know we've jumped ahead to some point thereafter, as the man we know only as Mr White (Harvey Keitel) frantically drives to a warehouse rendezvous point carrying a badly wounded Mr Orange (Tim Roth). These men, none of whom know one another's real names, are professional thieves - but the job they just went on went badly wrong, and Mr Pink (Steve Buscemi) thinks there has to be a rat in the team.

With its simple but stylish visuals, retro pop soundtrack, nonlinear story structure and machine-gun dialogue littered with vulgarity and pop culture references, Reservoir Dogs immediately carved out an identity with which writer-director Tarantino is still associated today - one which countless admirers did their best to emulate in the years that followed.

Reservoir Dogs also proved a major calling card for its cast. It marked a significant comeback for Harvey Keitel, who hadn't had a major leading role for some time (starring in the notorious Bad Lieutenant the same year also helped), as well as propelling Steve Buscemi, Tim Roth and Michael Madsen into the limelight. The jury was out on Tarantino himself, who took the role of Mr Brown, delivering the opening Madonna monologue; his acting didn't inspire such enthusiastic notices as his writing and directing.

Reservoir Dogs also inspired huge controversy over its harsh and realistically-presented scenes of violence, in particular a notorious torture scene involving Madsen's Mr Blonde. The film was briefly banned in Britain due to its bloodshed, and questions about his use of violence have plagued Tarantino his entire career.

20 Films So Shocking They Made Audiences Flee The Cinema