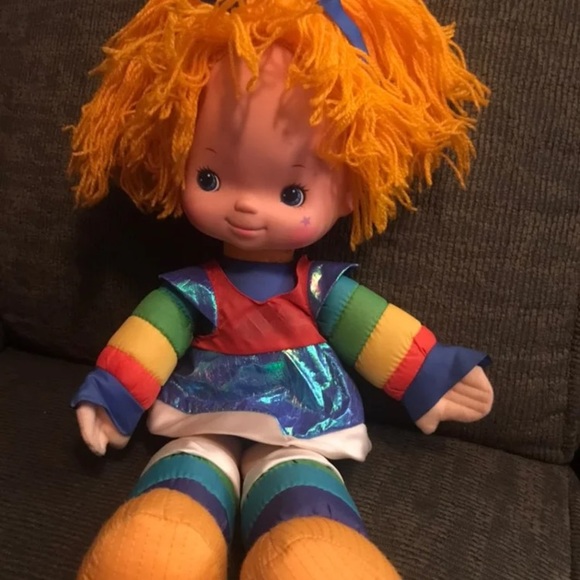 Rainbow Brite is a magical girl who has the power to control all the colours in the universe. Originally designed by Hallmark Cards, the character was introduced in 1983 as part of the company's efforts to reach a younger demographic.

In a similar vein to the Transformers media franchise, Hallmark took advantage of the deregulation of children's media in the 80s to promote swathes of merchandise - notably by partnering with Mattel and commissioning animators to create a syndicated TV series.

The Rainbow Brite TV series debuted in 1984, featuring the voice talent of Bettina Bush as the titular character. Bush, who had also voiced Megan in the My Little Pony animated series, would go on to star in 1988's Journey to Spirit Island. The TV series ran for only a single season of 13 episodes; however, it aired over the course of two years, concluding in 1986.

The series was accompanied by a 1985 feature film titled Rainbow Brite and the Star Stealer, which was received poorly by critics but grossed $4.9 million at the worldwide box office.

The Rainbow Brite doll line consisted of 111 different items, many of which were quite expensive for the time. As a result, Mattel produced smaller dolls as a more affordable alternative.

Rainbow Brite TV commercials frequently featured Over the Rainbow from the Wizard of Oz, famous for its bright technicolor, and starred child actors like Tracey Gold and Heather O'Rourke, who bore a resemblance to the character.

Rainbow Brite was temporarily retired in 1987, though the character has returned for stints in the 90s and further decade. A three-part miniseries was created in 2014, starring Emily Osment in the title role and Brat Pack alum Molly Ringwald as the villainous Dark Princess.

20 Retro Gifts To Buy Your Mum For Mother’s Day

8 Bags That Will Take You Back To Your School Days

10 Of The Very Rarest Toys From Our Childhood

The World Of Rainbow Brite, But Can You Name All 7 Colour Kids And Their Sprites?

12 DELICIOUS Food & Drink Items That Will Take You Back To The 80s!

10 Amazing Things Every 80s Girl Wishes She Had Kept!

10 Things You Would Find In an 80s Girl’s Bedroom