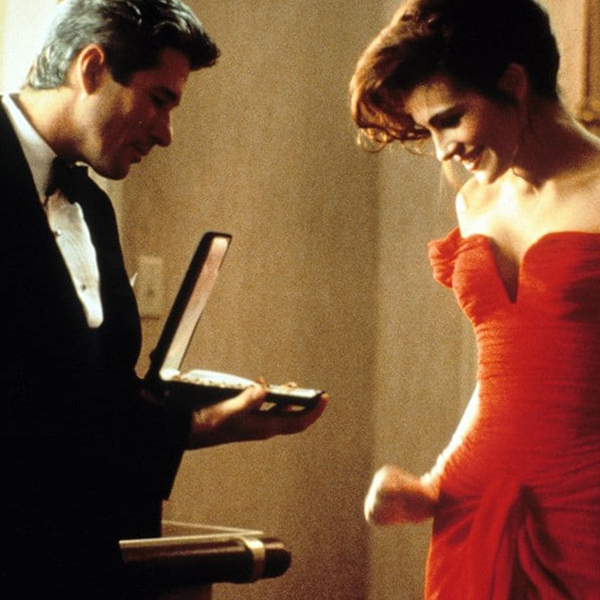 First hitting screens in March 1990, this film from director Garry Marshall became the first romantic comedy hit of the decade, sparked a career resurgence for leading man Richard Gere, and - perhaps most significantly - catapulted Julia Roberts to instant superstardom. Strange, then, that Pretty Woman began life as a very different film which might have been a whole lot less upbeat and optimistic.

Roberts is Vivian Ward, a low-rent Hollywood prostitute who crosses paths with Gere's wealthy businessman Edward Lewis. Recently dumped by his girlfriend and requiring female company for an upcoming business trip, Edward offers Vivian $3,000 plus a makeover and new wardrobe to be his date for the following week. She agrees, and enthusiastically embraces Edward's lavish lifestyle - but as the two get to know one another, it becomes clear their relationship is far from strictly business.

Pretty Woman has long been a controversial film in some quarters, over claims that it normalises or worse yet glamorises prostitution. It might not be too surprising, then, that in its original form the film was not the happily-ever-after Cinderella story audiences know and love today; writer J. F. Lawton's original script was a drama entitled $3,000, a far darker, more realistic take on sex work and corporate greed. However, substantial rewrites saw it turned into a softer, crowd-pleasing romance.

Julia Roberts was still a virtual unknown when cast as Vivian Ward; the many actresses to have turned the role down included Meg Ryan, Daryl Hannah, Michelle Pfeiffer and Molly Ringwald. The role proved to be a true life-changer for Roberts, making her one of the most talked about actresses around and landing her the Best Actress in a Musical or Comedy award at the Golden Globes, as well as an Oscar nomination.

Earning a massive $463.4 million off the back of a $15 million budget, Pretty Woman was a huge hit, and wound up the third highest-earning movie of 1990. It also helped rock group Roxette score a hit single with their theme song It Must Have Been Love. Nine years later, Roberts, Gere and director Garry Marshall would reunite on another rom-com, the less successful Runaway Bride.

Pretty Woman: 21 Facts You Never Knew About The Film