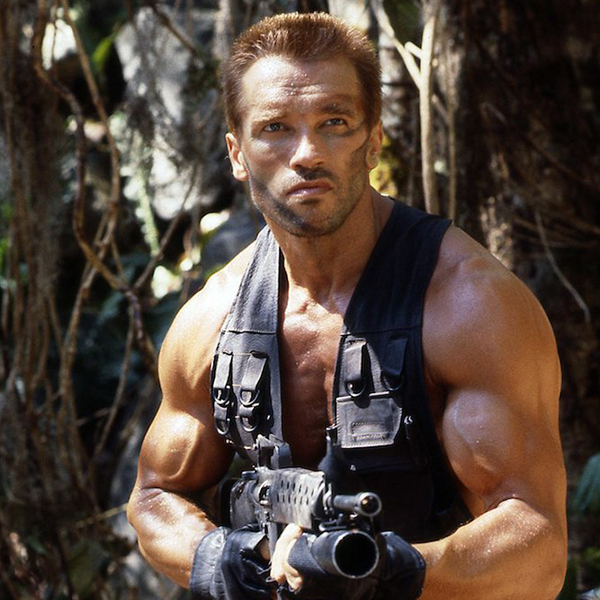 By 1987, Arnold Schwarzenegger was already established as the biggest action star on the planet - but he'd rarely been pitted against an adversary that seemed to pose him a genuine threat. This changed with Predator, the sci-fi action thriller that became one of the Austrian Oak's most enduring hits.

Dutch (Schwarzenegger) is the Major in command of an elite commando team. Hired by old buddy Dillon (Carl Weathers), a solider-turned-CIA agent, the team fly out into the Central American jungle on a rescue mission. However, when events take a sinister turn in the jungle, the team realise there's something out there hunting them - and, as Sonny Landham's Billy puts it, "it ain't no man."

Predator was the first major movie from director John McTiernan, who - thanks to both this and his follow-up film, 1988's Die Hard - would become one of the biggest Hollywood action filmmakers of the decade that followed. Sadly, his later collaboration with Schwarzenegger - 1993's Last Action Hero - didn't turn out quite so well.

With Schwarzenegger heading up a cast of muscular he-men, Predator is one of the most testosterone-heavy films of the 80s. Infamously, it very nearly co-starred another action star, Jean-Claude Van Damme, who was initially cast as a very different-looking alien hunter. However, as Van Damme was far shorter than most of the cast (and was said to be difficult on set), it was decided the 7'4" Kevin Peter Hall would make a more imposing adversary. The Predator was also redesigned by Stan Winston, giving us the dreadlocked, crab-faced monster we know today.

Reviews were lukewarm on release, but today Predator is held up as one of the best action movies ever. Sequel Predator 2 followed in 1990, before 2004's sci-fi action crossover Alien vs. Predator and its 2007 sequel Aliens vs. Predator: Requiem. Since then, the series has been rebooted twice with 2010's Predators and 2018's The Predator.

Stick Around For These 10 Facts You Never Knew About Predator