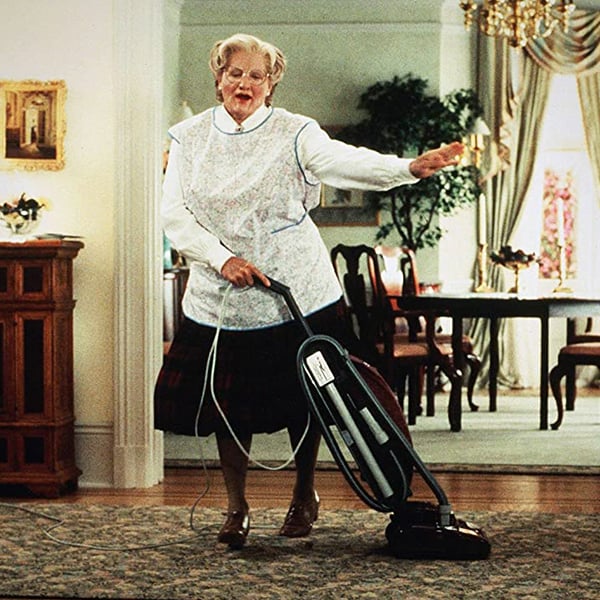 Starring Robin Williams as an estranged father incognito as a Scottish nanny, Mrs Doubtfire is a comedy-drama that ran rampant at the box office in spite of an unremarkable critical reception.

Daniel Hillard (Williams) is a voice actor whose relationship with his wife Miranda (Sally Field) breaks down after he quits his job and wrecks the house. After she files for divorce and obtains full custody of the children due to Daniel's joblessness, he's forced to devise a more ingenious method of seeing his children. Donning the disguise of Mrs Doubtfire, Daniel faces the challenge of running a family home and contending with Miranda's new boyfriend, Stuart (Pierce Brosnan).

Aided by an effervescent performance from Williams, who in the 90s was nearing the peak of his fame, the film took $441.3 million at the box office on a budget of $25 million; criticism mostly focussed on the film's sentimentality, though praise was offered for its depiction of a divorced family (notably, Daniel and Miranda remain divorced at the end of the film). This focus on how a family can continue to function in spite of divorce is a central theme of the novel on which the film was based: Alias Madame Doubtfire by Anne Fine, released in 1987.

Much of the budget was spent on Williams' makeup, which took four hours to apply. The efforts of the team were rewarded, however, with an Oscar for Best Makeup.

A sequel was in development for several years, though Williams was never happy with scripts presented to him. Finally, in 2014, a sequel starring the actor was announced. However, tragically, Williams committed suicide a few months later, and plans for the film were permanently shelved.