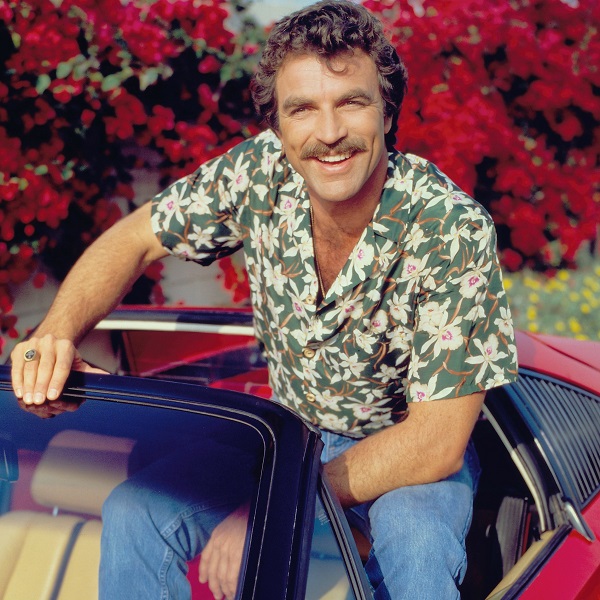 One thing 80s TV excelled at was presenting us with beautiful people whose lifestyles we could all feel thoroughly envious of. This was most definitely the case with Magnum, P.I., the smash hit series detailing the ongoing investigations of Hawaii-based private investigator Thomas Sullivan Magnum the third.

Magnum (Tom Selleck) is a former Navy SEAL and Vietnam veteran who now works as a P.I. out of Robin's Nest, an idyllic beachfront guest house owned by the perpetually unseen Robin Masters (whose few 'appearances' in the show were voiced by film legend Orson Welles). Here, Magnum lives the dream, driving Ferraris, romancing beautiful women, and generally taking it easy. Of course, the nature of his work means that trouble is never far away; and if he doesn't have bad guys to deal with, Magnum also has to face the wrath of Higgins (John Hillerman), the uptight manager of the Robin's Nest estate and a stickler for the rules, which leaves him constantly at loggerheads with our more rebellious hero.

These days Magnum, P.I. is probably best remembered for prompting a legendary movie casting near-miss. Tom Selleck's contractual obligation to do the show forced him to say no to Steven Spielberg and George Lucas, who had offered him the lead role of Indiana Jones in Raiders of the Lost Ark. This, of course, resulted in Harrison Ford being cast in that role instead, and Indiana Jones became a big screen phenomenon with four films made to date (and a fifth in the pipeline). As such the temptation is there to regard Selleck as one of the unluckiest actors ever, but he has insisted that signing on for Magnum, P.I. was "the best thing that ever happened to me."

The show was, after all, a huge success in its own right, making a superstar and sex symbol out of Selleck, and prompting plenty of 80s men to attempt the bushy moustache/Hawaiian shirt combination (including but not limited to Jim Hopper in season three of Stranger Things). Magnum, P.I wound up running for 162 episodes, from December 1980 to May 1988. During that time, Selleck and John Hillerman both won Emmy awards for their work, and there were crossover episodes with two other hit shows of the era: Simon & Simon and Murder, She Wrote. (A crossover with The Equalizer was also discussed, but never happened, alas.)

2018 saw the launch of a Magnum, P.I. reboot series, with Jay Hernandez taking over from Selleck in the title role.