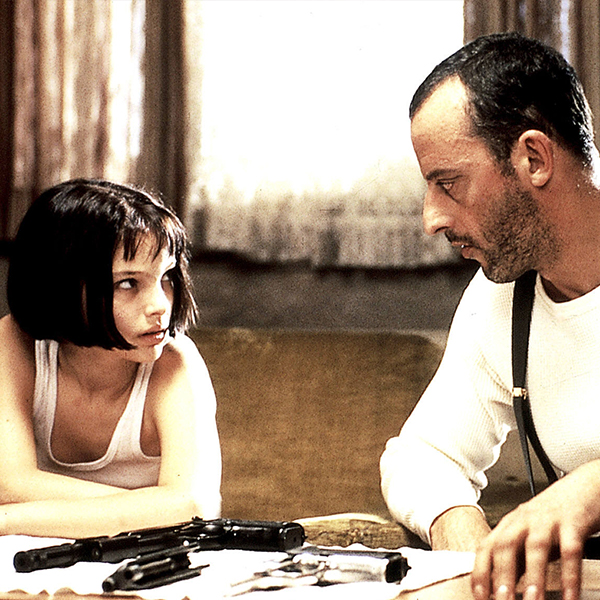 French director Luc Besson made a stir in his home country and beyond with his early films Subway, The Big Blue and La Femme Nikita; but it was with his first English language movie, 1994's Leon (originally released in the US as The Professional), that the filmmaker really made his mark worldwide.

Leon (Jean Reno) is a simple-minded Italian living in a rundown New York apartment building. At a glance he seems a harmless loner, but in truth he's the deadliest hitman - or, as he calls it, 'cleaner' - in the business, employed by kindly local mob boss Tony (Danny Aiello). As a professional killer, Leon's only rule is no women, no kids - but that rule is broken by the corrupt and deranged DEA Agent Stansfield (Gary Oldman), who murders the family in the apartment next door to Leon over a drug deal gone wrong.

The only survivor is troubled twelve-year-old Mathilda (Natalie Portman), who Leon reluctantly takes in. On discovering Leon's profession, the precocious orphan begs him to teach her how to 'clean' herself, to get revenge against Stansfield. Against his better judgement, he begins to train her; and in the process, a close bond develops between the two.

In its blend of French character-driven drama and quirky humour, plus large-scale Hollywood action set-pieces, Leon wasn't quite like anything audiences had seen before. Whilst Reno makes for a charismatic if unconventional hero, the show is largely stolen by Gary Oldman, whose gloriously unhinged turn as Stansfield elevated the British actor to the upper echelons of the great bad guy actors: Oldman would take further villainous roles in Air Force One and Besson's next film, The Fifth Element.

Natalie Portman also made a significant impression in her breakthrough turn as Mathilda - although the film was, and remains controversial for its portrayal of this pre-teen character, and the implication of a romantic attraction between her and Reno's Leon. Certain scenes which emphasised this troubling aspect of the film were removed from the international release.

Outside of 1997's The Fifth Element, Besson never really enjoyed the same success as a director, and has worked more extensively as writer and producer since, notably on the Transporter and Taken franchises. A Leon sequel following an adult Mathilda was on the cards, but due to legal issues Besson reworked the script into 2011 thriller Colombiana, starring Zoe Saldana.

20 Sharp-Shooting Facts You Never Knew About Leon: The Professional