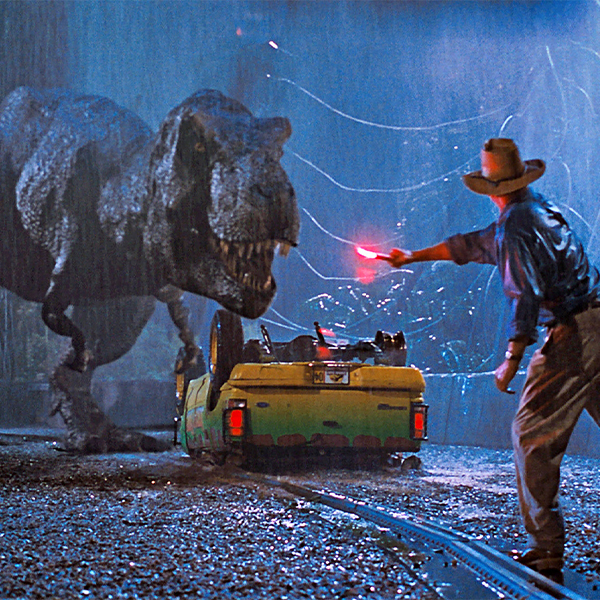 Director Steven Spielberg had twice held the record for the highest-grossing box office hit of all time: first with his 1975 breakthrough Jaws, then with 1982's E.T. the Extra-Terrestrial. However, in 1993 Spielberg did it again, breaking his own E.T. record with the staggering $914 million earned on the initial release of Jurassic Park.

The film's appeal was simple: Spielberg does dinosaurs, via the most advanced special effects work anyone had ever seen at the time. Jurassic Park is set on the (fictitious) South American island of Isla Nublar, on which eccentric billionaire John Hammond (Richard Attenborough) has built the most unique tourist attraction in the world: a safari park populated by genetically engineered dinosaurs.

Hammond brings in paleontologist Dr. Alan Grant (Sam Neill), paleobotanist Dr. Ellie Sattler (Laura Dern) and chaos theorist Dr. Ian Malcolm (Jeff Goldblum) to visit the as-yet unopened park and hopefully give their endorsement; but of course, they couldn't revive the deadliest predators the world has ever seen without consequences. As Malcolm unforgettably puts it, life finds a way.

Jurassic Park is an adaptation of Michael Crichton's 1990 novel of the same name. Before Spielberg secured the rights, plenty of other big-name directors were interested including James Cameron, Tim Burton, Joe Dante and Richard Donner. Spielberg wound up making the film back-to-back with his career-changing Oscar winner Schindler's List, making 1993 arguably the most significant year of the iconic director's career.

After initially considering bringing the dinosaurs to life via old-fashioned puppets and stop-motion animation, Spielberg ultimately hired monster maker Stan Winston to build animatronic dinosaurs for close-ups, whilst for more challenging longer shots the team at Industrial Light & Magic used cutting edge computer-generated imagery, technology that was still relatively under-utilised in Hollywood at the time. The result was the most remarkable visual spectacle ever put to film, and decades later it’s still every bit as impressive.

17 Famous Movie Scenes Before And After CGI