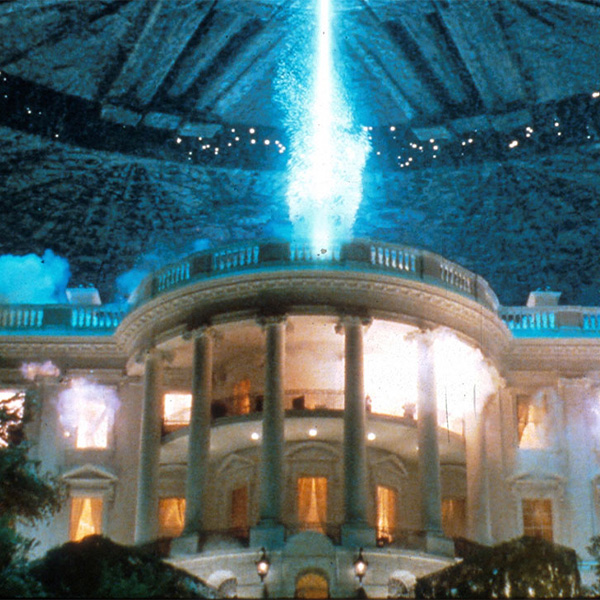 After Jurassic Park destroyed all box office records, no one thought another special effects-based blockbuster could ever hold a candle to its success. However, 1996's Independence Day made a good stab at it, and while director Roland Emmerich's alien invasion epic didn't ultimately dethrone Spielberg's dinosaur spectacular at the box office, it was a pretty close call.

On the 2nd of July, the world is stunned by the sudden arrival of a gargantuan spacecraft in Earth's orbit, from which 36 smaller but still massive saucer-shaped ships emerge, taking position all over the world. Soon enough these ships open fire, leaving much of the Earth a flaming ruin. In the days that follow, the survivors - among them Air Force Captain Steven Hiller (Will Smith), scientist David Levinson (Jeff Goldblum), and the US President himself (Bill Pullman) - band together to stage a final fight for the planet.

Writer-director Roland Emmerich and co-writer-producer Dean Devlin came up with Independence Day whilst promoting their previous film, 1994's Stargate; a question from a reporter prompted Emmerich to ask how it would feel to see giant spaceships hovering above every major city on Earth. From this initial image, Emmerich and Devlin rapidly knocked out a script taking inspiration from classic 50s B-movies about flying saucers.

Studio 20th Century Fox put pressure on the filmmakers to work fast, as they were keen to get their film in cinemas before another similar project: Tim Burton's Mars Attacks!, which ultimately hit cinemas in December 1996 and made a far smaller impact at the box office.

While the reviews were mixed, audience response was enormous: no one had seen such massive destructive spectacles in a movie before, making Independence Day a huge box office draw. It became the biggest hit of 1996, and at the time the second biggest hit ever - behind Jurassic Park.

Roland Emmerich would go on to direct more giant blockbusters based around mass destruction - Godzilla, The Day After Tomorrow, 2012 - but the real superstar launched by Independence Day was Will Smith, whose acting career progressed by leaps and bounds afterwards. However, Smith chose not to return for belated 2016 sequel Independence Day: Resurgence, a far less successful film which Emmerich has since admitted he regrets making.