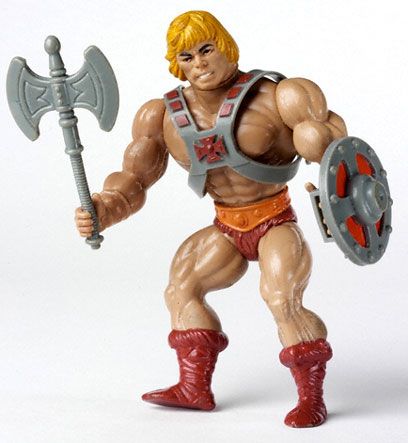 He-Man has been the star of several animated TV series, comic books, and a feature film. Originally, however, He-Man was the muscular protagonist of the Masters of the Universe toy line.

Developed by Mattel, early concept art for He-Man dates from 1976, when the company demurred to produce a series of Star Wars action figures. This was because George Lucas demanded a $750,000 up-front licensing fee. After Star Wars performed strongly at the box office, the race was on to produce a rival strand of toys.

According to Roger Sweet, one of the lead designers at Mattel, He-Man was created in late 1980.

"The only way I was going to have a chance to sell this was to make three 3D models - big ones," said Sweet. I glued a Big Jim figure into a battle action pose and I added a lot of clay to his body. I then had plaster casts made.

"These three prototypes," Sweet continues, "which I presented in late 1980, brought He-Man into existence. I simply explained that this was a powerful figure that could be taken anywhere and dropped into any context because he had a generic name: He-Man!"

In the early 80s, Mattel was embroiled in a legal storm after the 1982 Conan the Barbarian film sued the company for breaching copyright. The team behind the film had ostensibly approached Mattel to consider licensing the Conan character, played by Arnold Schwarzenegger. Ultimately, Mattel won the lawsuit, pointing instead to the fantasy paintings of Frank Frazetta as inspiration.

For a time, the Masters of the Universe toyline eclipsed even Barbie in sales, but fell afoul of corporate mismanagement. Superlative sales of $400 million in 1986 fell to a meagre $7 million in 1987: the market had become too saturated, and shelves were full of unsold stock. Furthermore, the critically panned Masters of the Universe film, starring Dolph Lundgren, bombed at the box office.

Since 2008's launch of the Masters of the Universe Classics toy line, the franchise has drifted out of popular culture. However, a rebooted live action film, starring Noah Centineo, will premiere in 2020.

Mekaneck To Stinkor: How Many Of These Obscure He-Man Toys Do You Remember?

10 Of The Very Rarest Toys From Our Childhood

20 Muscle-Bound Facts About Masters Of The Universe

15 Discontinued Snacks We Need Back in our Lives

17 Halloween Costumes Inspired By The 80s – Who Will You Go As?