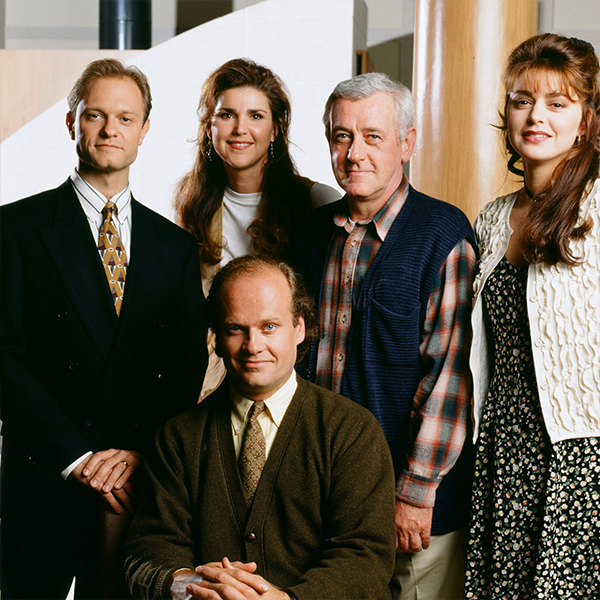 Cheers was the longest-running, arguably best-loved sitcom of the 1980s, so when it came to an end in 1993, no one wanted to see the series die out completely. Subsequently a spin-off series was conceived, centred on Kelsey Grammer’s supporting character, the psychiatrist Dr Frasier Crane. To the surprise of many, this offshoot took on a life of its own, enjoying success comparable to that of its predecessor.

Where Cheers had been set in Boston, Frasier (whose first season premiered in September 1993) follows Grammer’s title character as he returns to his home town of Seattle. Here he finds professional success as a radio advice show host helping listeners with their problems.

Of course, Frasier’s own life has no shortage of problems, as he shares his apartment with his retired cop father Martin (the late John Mahoney) and Martin's live-in nurse Daphne (Jane Leeves). Frequently stopping by are Frasier’s brother Niles (David Hyde Pierce), also a psychiatrist, and who is not-so secretly smitten with Daphne; and Frasier’s no-nonsense radio producer Ros (Peri Gilpin).

Frasier stood apart from most sitcoms that came before it (Cheers included) in that it adopted a somewhat intellectual tone; although at the same time, intellectualism was frequently the object of humour, as the high brow leanings of Frasier and Niles clash with the simpler, working class sensibilities of Martin, Daphne and Ros.

The show was a hit with audiences and critics, and became a staple at awards shows, scooping a record 37 Emmy wins across its 11-year run. Frasier ended in 2004 after 256 episodes, although there has recently been talk of a possible revival.