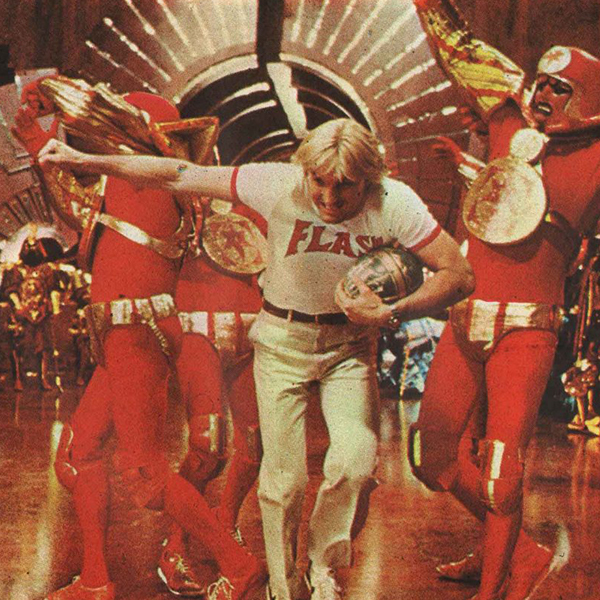 Based on a comic strip, 1980's Flash Gordon is an English-Dutch-American space opera film about a football star drawn into an interplanetary conflict. Starring Sam J Jones as the titular New York Jets quarterback, the film has become a cult classic in the decades since its release.

When Flash Gordon's plane is downed by a meteorite, a series of chance encounters brings him to Mongo, a planet ruled by Emperor Ming the Merciless (Max von Sydow). Ming has grown bored and decides to toy with Earth, creating natural disasters and ultimately planning to destroy the planet entirely.

It falls to the space-traveling sportsman to carefully negotiate the political rivalries of Mongo and its adjacent planets - often atop a 'rocket cycle' - as he attempts to thwart Ming's evil scheme.

Described by Roger Ebert as another space opera in which "[filmmakers] of unlimited imagination [are] harnessed to definitely limited skills," the film nonetheless displays "energy and love and without the pseudo-meaningful apparatus of the Force and Trekkie Power..."

Replete with bright colours and a soundtrack by flamboyant rock band Queen, the film has garnered a cult following for its wacky plot and larger-than-life performances. In particular, Brian Blessed's role as Prince Vultan, the ruler of winged aliens who reside in Sky City, has become one of his best-known and most-quoted. When Flash Gordon unexpectedly survives Ming's latest onslaught, he utters the immortal line: "Gordon's alive?!"

"If I’m halfway up Kilimanjaro and meet a Maasai tribesman," Blessed noted in a 2015 interview with The Telegraph, "he’ll say, 'It’s you! Please shout, 'Gordon’s alive!’

"It’s a cry for freedom," the actor added.

These Facts About Flash Gordon Are ALIVE!