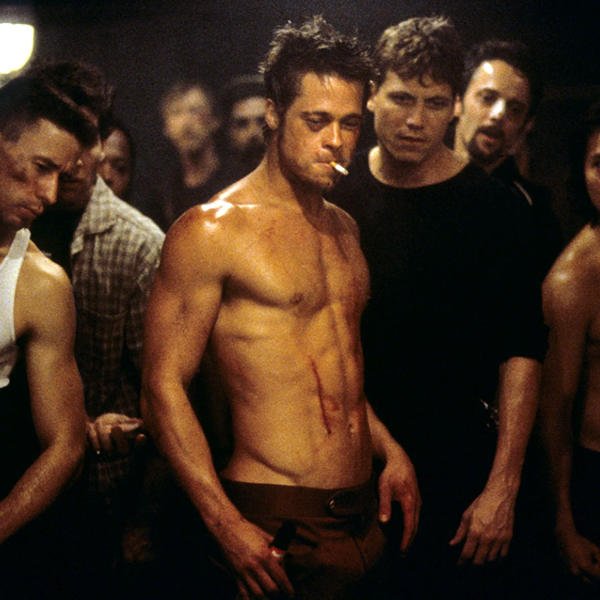 A brutal satire of modern masculinity, Fight Club is a 1999 adaptation of the novel of the same name by Chuck Palahniuk. While it was a box office disappointment on release, the film has since become a cult classic and has been considered a harbinger of increasing corporatism and contemporary terrorism.

Edward Norton stars as the nameless Narrator, who struggles to find purpose in a world motivated by consumption and acquiring nice furniture. In an attempt to cure his insomnia, he attends a support group for sufferers of testicular cancer despite having never contracted the disease. However, when the Narrator meets Tyler Durden (Brad Pitt), a philosophically-minded soap salesman, their fistfights in the parking lot of a bar begin a national revolution.

One of the film's main themes is all-pervasive advertising, which - either ironically or consequently - led to the film's relative downfall at the box office. The studio balked at director David Fincher's cut and intervened in the film's marketing: it was pushed back to an autumn release, and then advertised alongside wrestling despite Fincher's protestations. Ultimately, the film returned $100.9 million on a budget of $63 million.

However, the film performed much better on home media, in no small part due to Fincher's obsession with the packaging and release of the DVD version of the film, which came in simulated brown paper wrapping which gave it "incredible shelf-presence," according to 20th Century Fox's vice president of marketing Deborah Mitchell.

Fight Club remains popular, and the rules of the titular Fight Club - namely, to never talk about it - have entered the pop-culture canon. So, too, has the film's ultimate twist.