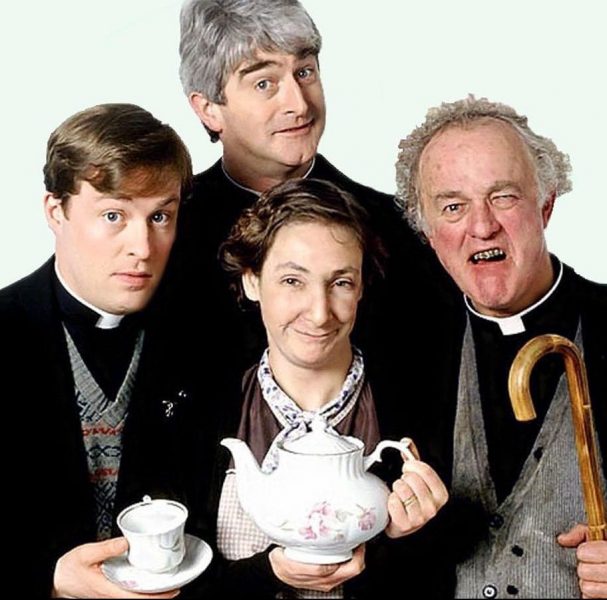 In the annals of sitcom history, few entries are quite so wonderfully idiosyncratic as Father Ted. Written by Graham Lineham and Arthur Matthews, the Irish-British co-production gives a distinctive twist to the standard sitcom set-up of four family members in a house, by making the inhabitants of the house in question a trio of incompetent Catholic priests and their doting housekeeper.

Dermot Morgan took the title role of Father Ted Crilly, an ambitious but ill-disciplined priest who has been essentially banished to the remote parish of Craggy Island due to some financial indiscretions. Here, Ted lives with the young and absent-minded Father Dougal McGuire (Ardal O’Hanlon) and Father Jack Hackett (Frank Kelly), an elderly, perpetually drunk priest with a foul temper. The three priests are looked after by Mrs Doyle (Pauline McLynn), a housekeeper who takes uncommon pride in her work, particularly making the tea.

Father Ted won over audiences and critics with its uniquely off-the-wall sense of humour, and the winning chemistry of its central cast. The combination of Ted’s world-weary cynicism, Dougal’s child-like obliviousness and Jack’s inarticulate rage tickled the funny bone of millions of viewers, and the show threw the characters into all manner of bizarre and often painfully awkward situations.

Father Ted ran from 1995 to 1998, with three seasons and a Christmas special produced. The plan had always been to end there, but this was made sadly final when Dermot Morgan died suddenly of a heart attack the day after they wrapped production on the last episode.