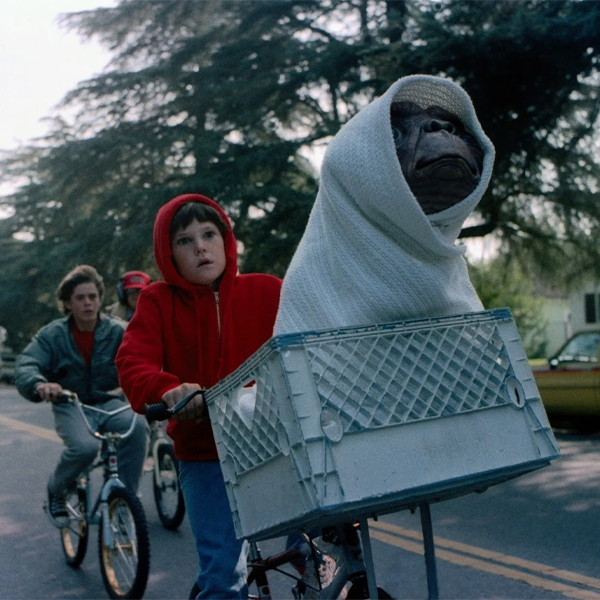 For eleven years the highest-grossing film of all time, E.T. the Extra-Terrestrial is a family science-fiction film that has become one of the most enduring pop-culture touchstones of the 80s.

Directed by Steven Spielberg, the film depicts the unlikely friendship between a young boy, Elliott, and an alien stranded on Earth, who learns to speak English by watching Sesame Street and is able to heal wounds by touch alone. However, government agents soon take an interest in the strange, new lifeform.

Produced on a budget of $10.5 million, E.T. the Extra Terrestrial returned a record-breaking $792.9 million at the box office; it would only be knocked off the global top spot by 1993's Jurassic Park, also directed by Spielberg.

The film is notorious for its heavy product placement, making it something of an 80s time capsule. Not only does E.T. develop a fondness for Reese's Pieces, but the ad hoc communication device he uses to phone home includes a Speak & Spell, an educational 80s toy.

E.T. the Extra-Terrestrial launched the career of Drew Barrymore, who stars as Gertie at the age of just seven. Having initially auditioned for Poltergeist, on which Spielberg served as executive producer, Barrymore's lie that she was in a punk rock band convinced the director that she had the imagination required for a role in E.T.

The scene in which Elliott and E.T. fly through the sky on bicycles has become a cornerstone image of pop culture, to the extent that it was repurposed for the logo of Spielberg's Amblin Entertainment. The set-piece of plucky children interacting with the supernatural while riding bicycles has been heavily referenced in Stranger Things, It: Chapter One and further media that seek to capitalise on 80s nostalgia.

20 Things You Never Knew About E.T. The Extra-Terrestrial