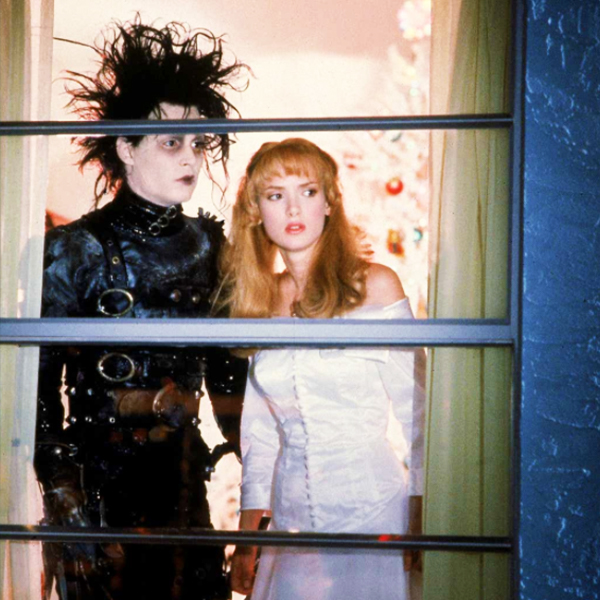 After breaking through with Pee-Wee's Big Adventure and Beetlejuice, then directing 1989 blockbuster Batman, director Tim Burton took on his most personal project yet in 1990's Gothic fantasy Edward Scissorhands. This proved to be a major career turning point not only for Burton, but also for his lead actors Johnny Depp and Winona Ryder.

The story takes place in an idyllic all-American suburb, which - bizarrely - sits in the shadow of a creepy old castle on a hill. When enterprising Avon saleswoman Peg (Dianne Wiest) visits the castle, she is startled to meet Edward (Depp), an artificial man built by an old, eccentric inventor (horror legend Vincent Price, in what would be his last role). Sadly, the inventor died before he was able to finish his creation - leaving Edward with lethally sharp scissors where his hands should be.

Recognising Edward's humanity, Peg brings him home to live with her family, which includes teenage daughter Kim (Ryder), with whom Edward soon falls in love - but, although the clean-cut community are initially fascinated by him, it soon becomes clear they will not accept this strange outsider.

Edward Scissorhands began life as a sketch Burton drew as a teenager, expressing his own sense of alienation from the world around him: hence the character, with his pale skin and unruly black hair, somewhat resembles the director himself. Burton took the idea to writer Caroline Thompson, with whom he developed a full story centred on the tragic figure.

Winona Ryder, who got her breakthrough in Burton's earlier film Beetlejuice, was on board right away as love interest Kim, but casting Edward himself proved trickier. Studio 20th Century Fox wanted Tom Cruise, whilst other contenders included Tom Hanks, Gary Oldman, Jim Carrey, Robert Downey Jr. and even Michael Jackson. However, Burton's first choice was always Johnny Depp, then still best known for TV's 21 Jump Street and eager to shake off his teen idol image.

While it wasn't a Batman-sized hit ($86 million worldwide), Edward Scissorhands was warmly received and went a long way to establish Burton as one of the most distinctive mainstream filmmakers around. It was also the start of a long working relationship between the director and leading man Johnny Depp; the two would reunite on a further seven films to date, including 1994's Ed Wood, 1999's Sleepy Hollow and 2010's Alice in Wonderland.