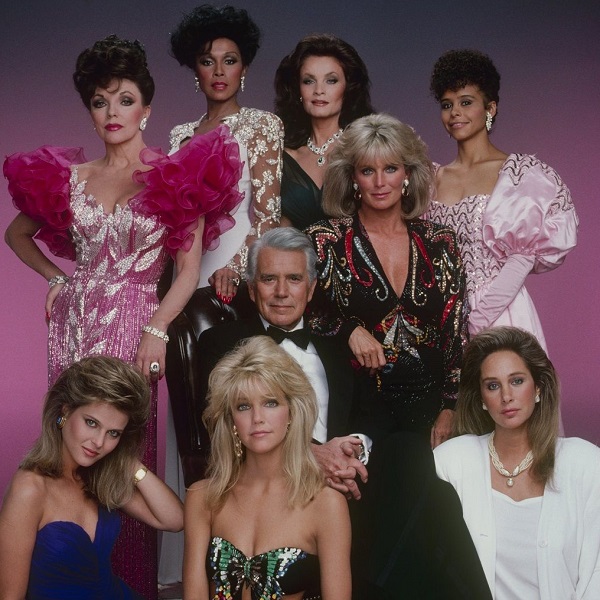 The huge success of CBS's soap opera Dallas proved that audiences couldn't get enough of the lifestyles of the rich and shameless - so when rival network ABC decided to launch a new soap of their own in 1981, they knew they only way to go was glitzier, gaudier and even more ridiculous. The result was Dynasty, which centred on another wealthy family that made its fortune in oil, but learned its manners from the school of hard knocks.

Spearheaded by super-producer Aaron Spelling (responsible for such TV hits as Starsky and Hutch, Charlie's Angels, Fantasy Island and later Beverly Hills 90210), Dynasty was created by Richard and Esther Shapiro and centred on the Carringtons, mansion-dwelling millionaires in Denver, Colorado. Initially centred on Blake Carrington (John Forysthe) and his new wife Krystle (Linda Evans), the show didn't do so well until the introduction of English actress Joan Collins as Blake's ex-wife Alexis at the start of season 2. One of the most legendarily catty characters in TV history, Alexis's introduction finally took Dynasty into arch-camp territory. The combination of Collins with Evans, along with other glamorous actresses including Heather Locklear and Catherine Oxenberg, made Dynasty a ratings sensation. Big hair, big shoulder pads and bad attitudes were the only way to go.

Later, Collins was joined on Dynasty by fellow English actresses Stephanie Beacham as Sable Colby and Kate O'Mara as Caress Morrell, increasing both the British presence and the catfight factor. It just wasn't an episode without these heavily made-up, lavishly-dressed women venomously badmouthing one another before getting into a slapping, scratching, hair-pulling brawl. Audiences all over the world ate it up.

Still, as absurd as Dynasty may have been, it was bold enough to delve into serious areas that other dramas of the time didn't, exploring sexual and racial issues. It also proved topical for giving film legend Rock Hudson his last role: the actor had hidden his homosexuality throughout his career, and in his last days on the soap it came to light that he had AIDS, which he sadly became the first celebrity to die from in 1985.

Eventually ending in May 1989 after 220 episodes, Dynasty spawned short-lived spin-off series The Colbys (which also starred Beacham), and two-part miniseries Dynasty: The Reunion in 1991, before being rebooted by US network the CW in 2017.