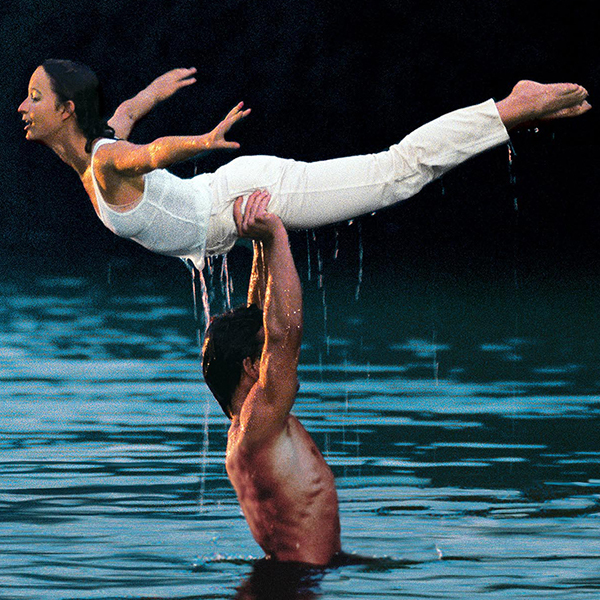 When Francis Houseman (Grey), nicknamed Baby, is taken to an upscale holiday resort, the exploitative staff quickly begin to irritate her. Striking up a friendship with Johnny (Swayze), a member of the working-class entertainment team she finds herself falling in love and into a world complicated by sex and power.

Written by Eleanor Bergstein, Dirty Dancing caused controversy on its release due to its theme of abortion, an indecent proposal, and the central romance between a 25-year-old man and a 17-year-old girl. However, it was an uproarious box office success, earning $214.6 million on a budget of only $5 million, making it one of the most successful romance films of the 80s.

The film has become iconic for its climactic dance number, set to (I've Had) The Time Of My Life by Bill Medley and Jennifer Warnes, which won the Academy Award for Best Original Song. The difficult lift that occurs during the dance, and which Johnny and Baby struggle to perform throughout the film, has similarly become a recurring pop culture image.

In spite of the chemistry between the leading duo, Swayze and Grey notoriously did not get along on set, often having arguments; their mutual dislike dated back to their initial collaboration on Red Dawn, a film in which teenagers resist a Soviet invasion with guerilla warfare. Grey considered Swayze arrogant.

Dirty Dancing was followed by a loose prequel in 2004's Dirty Dancing: Havana Nights. While not involving the characters of the original film, Havana Nights does make use of the same basic plot. It also stars Swayze in a cameo as a dance class instructor. Havana Nights, despite being made on a budget of $25 million, made only $27.7 million at the box office.

Patrick Swayze Was More Than Just an Actor. Here’s Why

You Can Now Stay At The Resort From Dirty Dancing