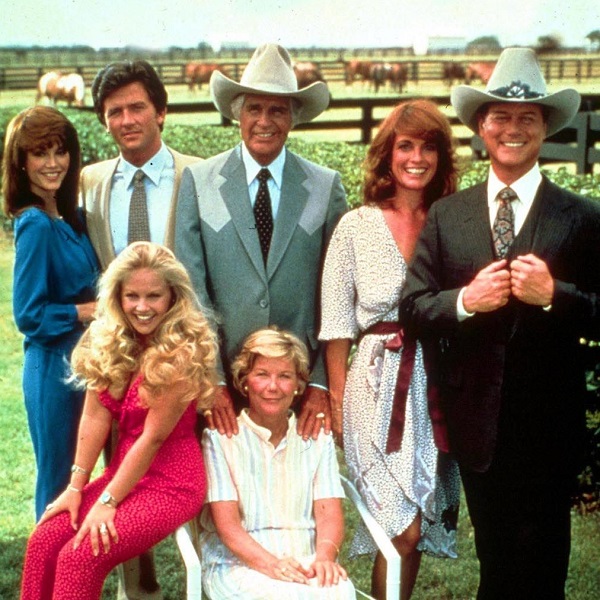 Few TV shows were quite such staple viewing in the 80s as Dallas. Though the all-American soap opera first hit the airwaves in 1978, it's fair to say it pretty much dominated the decade that followed, keeping audiences worldwide transfixed with its peek into the lifestyles of the rich and shameless, and its succession of increasingly outlandish, melodramatic plot devices.

Set in the Texas city of the title, Dallas centres on the Ewing family, a wealthy clan of thoroughbred Texans who've amassed a vast fortune from oil and cattle. As we all know, where there's money, there's drama, and Dallas was never short on this. In the show's early days the focus was on the conflict between the Ewings and the Barnes family, a long-standing feud complicated by the romance between Bobby Ewing (Patrick Duffy) and Pamela Barnes (Victoria Principal). However, the spotlight was soon stolen by the dirty dealings of Bobby's duplicitous, perpetually-stetson clad older brother, J.R. (Larry Hagman).

American soaps in particular have long been notorious for their readiness to go to some crazy places in the name of drama, and Dallas pretty much wrote the rule book for that. To this day, the mystery over who shot J.R. in 1980's third season remains one of the most iconic story threads in TV history.  And of course, who can forget the first episode of season 10, in which it was revealed that the entire previous season had just been Pamela's dream.

After many more twists and turns, Dallas ended its initial run in 1991, after 14 seasons (and with Larry Hagman's J.R. having appeared in all 357 episodes). By this time it had spawned spin-off series Knots Landing, also a huge success, running from 1979 until 1993. Three Dallas TV movies followed in the 90s, and in 2012 Dallas was relaunched, bringing back several key stars from the original series alongside a new cast. This new incarnation of the beloved soap lasted three seasons.

Where Are The Cast Of Dallas Now?