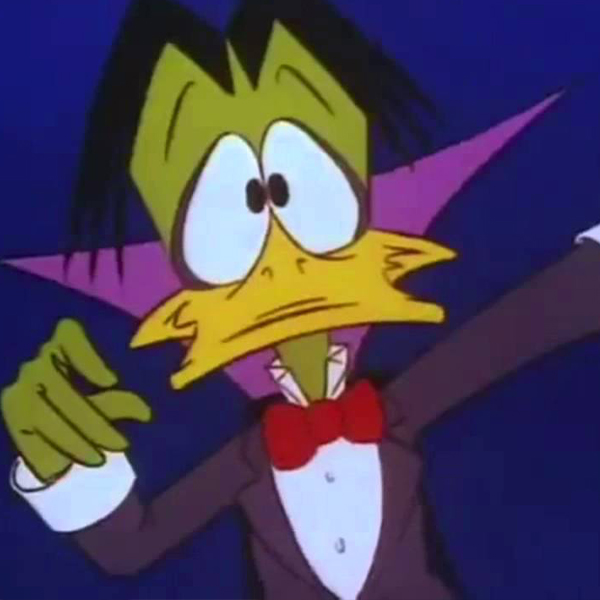 After the success of Danger Mouse, UK animation house Cosgrove Hall Films took a villain from that popular cartoon and made him the title character in a series of his own. That character was Count Duckula, an extremely loose reworking of Bram Stoker’s notorious vampire – in mallard form.

Where the Count Duckula of Danger Mouse had been an outright bad guy, the writers hit on a novel way of making the character more loveable in the Count Duckula series. As the show’s title sequence explained, our hero is the latest incarnation of an evil vampire duck who is periodically resurrected by his minion Igor. However, in this instance the resurrection goes wrong, as the dim-witted Nanny inadvertently uses tomato ketchup where the ritual called for blood. As a result, Count Duckula is reborn as a vegetarian.

Rising at sunset, Count Duckula, Igor and Nanny proceed to embark on globe-trotting adventures, taken to far-off places every episode by Duckula’s castle, which has the magical ability to teleport anywhere in the world but always returns to Transylvania at dawn. Much to Igor’s annoyance, the carrot-loving Count cares more about pursuing fame and fortune than the more traditional vampiric evil-doing.

Premiering in 1988, Count Duckula became a huge success in its own right. David Jason, who also voiced both Duckula and the title character in Danger Mouse, returned to voice the Count, giving him a goofy American accent. The series ran until 1993, and spawned a spin-off series of its own in Victor and Hugo: Bunglers in Crime, which was based around occasional Count Duckula baddies Gaston and Pierre.

16 Cartoons From Your Childhood We Bet You’ve Forgotten About