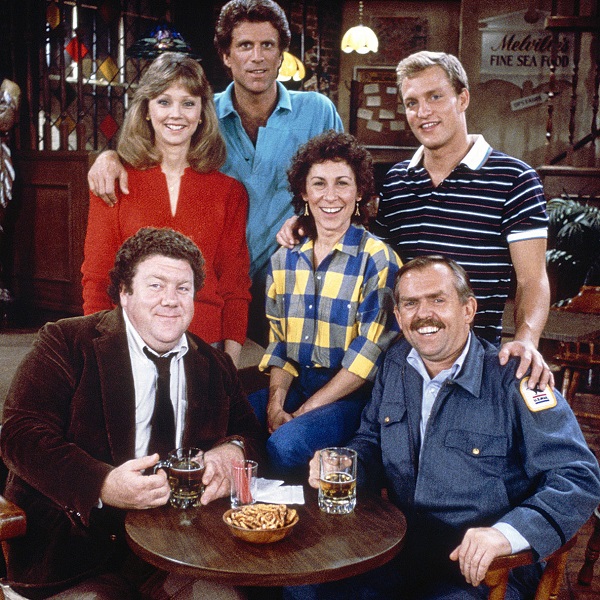 Millions of people around the world spent the bulk of the 80s at a bar in Boston, named Cheers. The eponymous drinking ground served as the location for what was, until recently, the longest-running live action sitcom of all time.

Sam Malone (Ted Danson) is a former baseball player who now runs the homely bar where - as the show's unforgettable theme song puts it - everybody knows your name. He works alongside Coach (Nicholas Colasanto) and Carla (Rhea Perlman), serving regulars including Cliff (John Ratzenberger) and Norm (George Wendt). Things are shaken up by the arrival of new waitress Diane (Shelley Long), a collegiate intellectual who's out of sorts among the bar’s less sophisticated staff and clientele.

Curiously, although Cheers proved to be one of the most popular sitcoms ever, it wasn't plain sailing to begin with. After premiering in September 1982, low ratings almost saw the show axed. However, it soon became staple viewing on both sides of the Atlantic. By the end of its run in 1993, Cheers was one of the most widely watched shows on television, garnering a record 114 Primetime Emmy award nominations (with 28 wins). Plus, with 275 episodes to its name it was the longest-running sitcom ever: The Big Bang Theory broke that record in 2019, ending on episode 276.

Cheers even proved successful enough to survive major cast changes. When Nicholas Colasanto died suddenly in 1985, Woody Harrelson was introduced as Woody; and when Shelley Long quit in 1987, Kirstie Alley took over as Rebecca. Later seasons added another notable supporting character in Kelsey Grammer's Frasier, initially a love interest to Diane who wound up a Cheers regular. Frasier proved popular enough to get his own spin-off show, which premiered shortly after Cheers ended and became hugely successful in its own right.

Still close to the heart of audiences, Cheers catapulted its cast to stardom, and most of them are still prolific actors to this day. Woody Harrelson surprised everyone by becoming a major movie star, and Ted Danson went on to further TV success with Becker, CSI and The Good Place. However, perhaps the most unexpected success story to come out of Cheers is John Ratzenberger, officially one of the most successful actors of all time thanks to his long working relationship with Pixar.