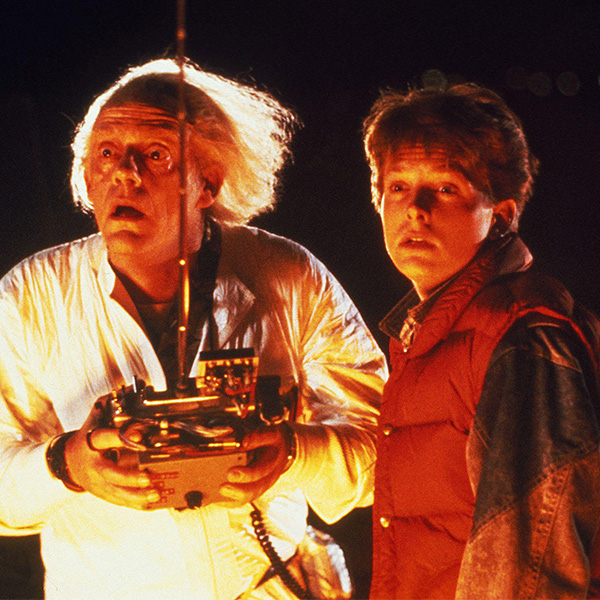 This 1985 science fiction comedy adventure is widely hailed for having one of the most perfectly crafted screenplays ever. Back to the Future provides every bit as much rollercoaster ride entertainment as any great 80s blockbuster, yet at heart it's actually a pretty small-scale, character-based story about home and family.

Skateboarding wannabe guitar hero Marty McFly (Michael J. Fox) is your average 80s teen, but has an unusual best friend in the aged, eccentric inventor Dr. Emmett Brown (Christopher Lloyd). Marty is stunned to find out that the Doc has built a fully functional time machine out of a Delorean automobile, but when the machine's first test goes awry Marty finds himself trapped in 1955.

Crossing paths with his future parents Lorraine (Lea Thompson) and George (Crispin Glover), Marty inadvertently alters the past, threatening his very existence. Whilst the 1955 Doc Brown works to get him home, Marty must also play matchmaker to ensure his parents still get together.

Director Robert Zemeckis and producer Bob Gale (both of whom also wrote the script) had been trying to get Back to the Future made for some time, but it wasn’t until Zemeckis had a hit with 1984’s Romancing the Stone that they finally got the green light.

Michael J. Fox was initially unavailable to play Marty due to his commitment to TV sitcom Family Ties, so the film started production with Eric Stoltz playing Marty. However, after two weeks of shooting the filmmakers realised Stoltz didn’t suit the role, and fired him. A special deal was then worked out for Fox to shoot the film around his Family Ties commitments.