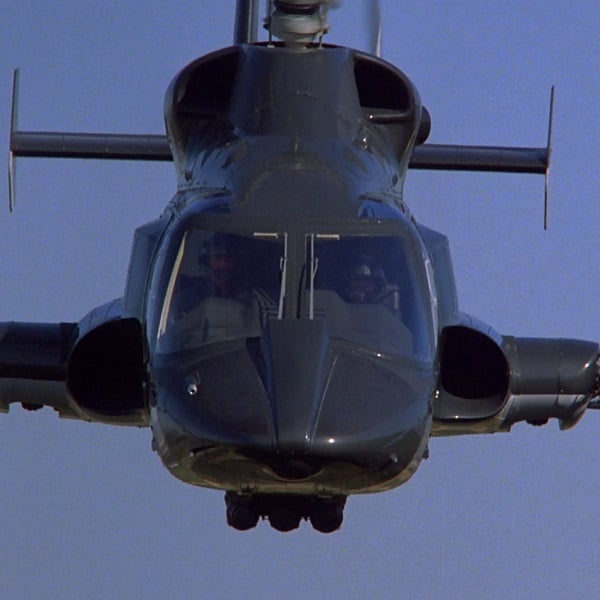 When it came to small screen action in the 80s, no TV show went to such soaring heights as Airwolf. Centred on the high-tech military helicopter of the title, this show was to the air what Knight Rider was to the land, and fuelled the heroic fantasies of viewers young and old alike.

Jan-Michael Vincent took the lead as Stringfellow Hawke, ace test pilot trying to locate his brother who's been missing in action since Vietnam. When top secret experimental super-chopper Airwolf is hijacked, Hawke and his fellow pilot/mentor Dominic Santini (film legend Ernest Borgnine) are sent in to get it back, and wind up becoming Airwolf's pilots full-time in an uneasy alliance with the enigmatic Firm.

Considering that Airwolf was a big favourite of many kids at the time, it's easy to forget the show began as a fairly hard-edged action drama, whose storylines dealt with the very real tensions of the Cold War era. The producers veered away from this by the second season, toning things down for a more light-hearted, family friendly adventure series. Airwolf was also caught in a ratings battle early on, as it premiered in the same year as another show which centred on a high-tech helicopter: Blue Thunder, a small-screen spin-off of the 1983 movie of the same name. However, as Blue Thunder was cancelled after only 11 episodes, it's quite clear who won that particular war.

Unfortunately, production on Airwolf was far from plain sailing. Though the ratings were high, the show was expensive to make, and struggles behind the scenes saw series creator Donald P. Bellisario (also the creator of Magnum, P.I.) walk away after two seasons. Meanwhile, lead actor Jan-Michael Vincent struggled with personal problems and alcoholism. This ultimately resulted in a total makeover of the show in season 4: Vincent and Borgnine were fired, and Barry Van Dyke was introduced as Hawke's long-lost brother, taking over as Airwolf's pilot.

However, the new-look Airwolf failed to win over audiences, and the series was ultimately axed in 1987 after 80 episodes. Sadly the series has a tragic postscript, as years later the screen-used Airwolf helicopter would be sold off and refashioned as an ambulance helicopter in Germany, which crashed in a 1993 storm killing everyone on board.