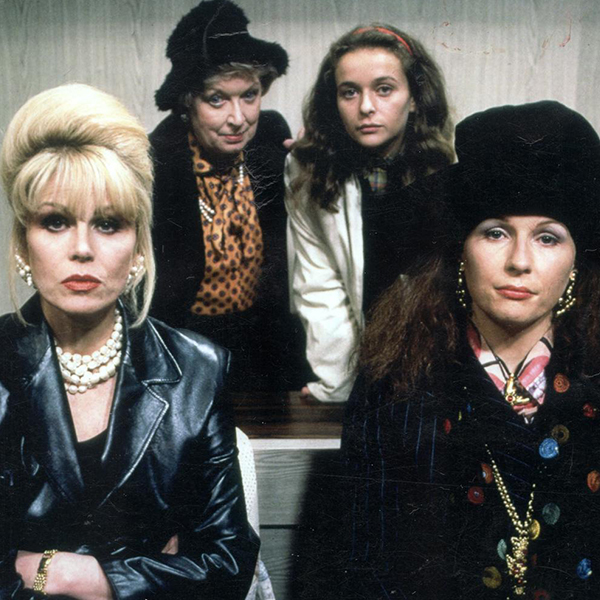 After rising to fame alongside partner Dawn French as part of the 80s alternative comedy movement, Jennifer Saunders really broke through to the upper echelons of TV stardom as the creator and lead actor of sitcom Absolutely Fabulous. Inspired by an earlier French and Saunders sketch centred on a childish mother dependant on a more responsible daughter, the series hit screens in 1992 and became a major sensation.

Saunders stars as Edina Monsoon, a fashion industry PR agent who enjoys a hard-partying lifestyle and garish dress sense, despite the fact that she’s on the brink of middle age. Her main cohort in drinking and debauchery is her best friend Patsy (Joanna Lumley), whilst Edina’s straight-laced daughter Saffron (Julia Sawalha) struggles to make her mother grow up. Filling out the cast are June Whitfield as Edina’s mother, and Jane Horrocks as Edina’s ditzy assistant Bubble.

Absolutely Fabulous delighted audiences with its reversal of traditional family roles, its steadfast emphasis on female characters, and perhaps above all its ruthless mockery of the fashion industry. The series made icons out of its lead stars, and proved a particular career-changer for Joanna Lumley, who had not previously been known for comedy.

The initial run of Absolutely Fabulous lasted for three seasons, ending in 1995, with a one-off special following in 1996. However, the show’s enduring popularity saw it revived in 2001; two further seasons and two Christmas specials followed. Finally, 2016 saw the theatrical release of Absolutely Fabulous: The Movie.